Fife: About 3 miles south-west of Cupar, on minor roads north of A914, 0.5 miles south of Springfield, south of River Eden, at Crawford Priory. 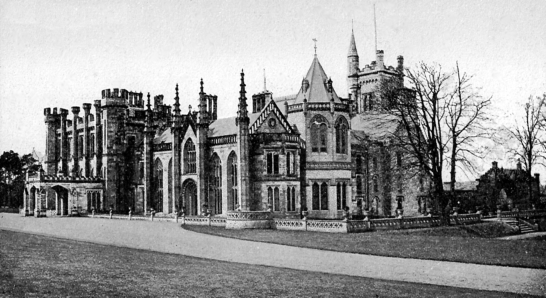 Crawford Priory is an impressive, Gothic mansion, started in 1809 and extended a few years later, but now a derelict and deteriorating shell. The present building replaced an earlier house that dated from the middle of the 18th century, and had a sumptuous interior.
Crawford Priory was built for the unwed Lady Mary Crawford, who in 1808 succeeded to the Lindsay-Crawford property and lands, on the death of her brother, the 22nd Earl of Crawford. Mary never married but she did have a large menagerie of animals, both pets and wild, in and around the mansion. 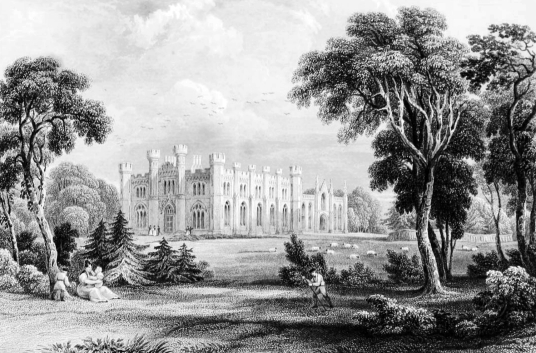 After her death in 1833 and a splendid funeral, the house fell empty and dilapidated, although Lady Mary had left provision for the animals in her will. The mansion was then restored in the 1870s after passing to Lady Gertrude Boyle, daughter of the 6th Earl of Glasgow, and her husband Thomas Cochrane, but it is now derelict and ruinous again.
The grounds are said to be haunted by an apparition of Lady Mary.

Description of Lady Mary's funeral in 1833, from the pen of Lord Lindsay, in his The Lives of the Lindsays (1858).

‘It was in the Gothic hall of Crawford Priory that the funeral service of the Church of England was read over her remains.  About the middle of the service, the sun's rays suddenly streamed through the painted glass, on the groined roof and on the trophies  of ancient armour disposed round the walls, and lighted up the very pall of death with the gules and azure of the Lindsay cognizance  emblazoned on the window, and then died away again. The service over, the procession moved slowly from the priory door, ascending by a winding road, cut through a wood of pines, to the mausoleum, on the summit of a lofty eminence, where her brother, Earl George, was buried. Numbers of the tenantry and of the townspeople of Cupar and Ceres attended, and the hills were covered with groups of spectators. A more impressive scene I never witnessed. And thus, amidst a general subdued silence, we committed to the dust the last of the long line of the Lindsays of the Byres.’