Fife: In Dunfermline, on minor roads south of A994 or north of B9156, north of Pittencrieff Park, just south of the Abbey church, at Dunfermline Palace and Abbey. 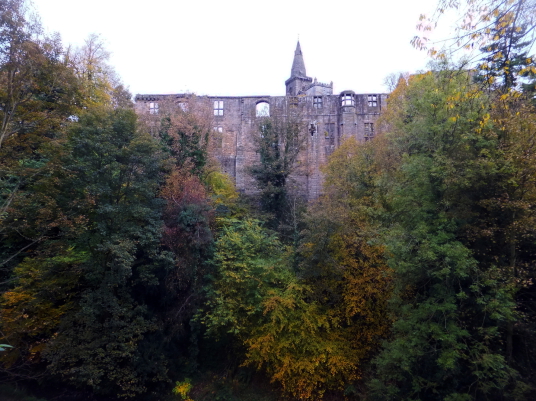 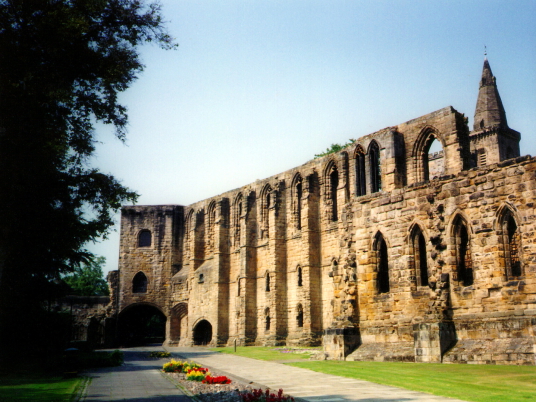 Set in the burgh of Dunfermline, part of the buildings to the south of the abbey church were remodelled as a Royal Palace in 1587. The ruins are particularly impressive from Pittencrieff Glen, and consist of a range of buildings modelled into the palace from the guest range of the abbey, although not much now survive except one facade. The building had wide mullioned windows and elaborate vaulting and had a sumptuous interior. 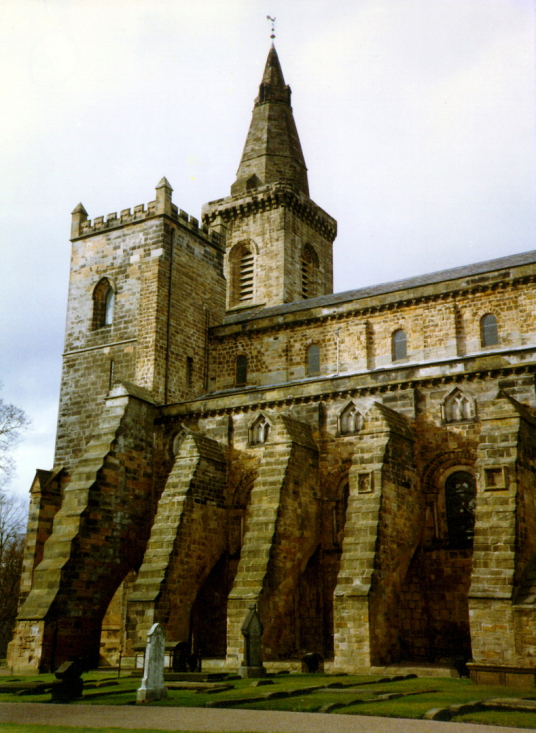 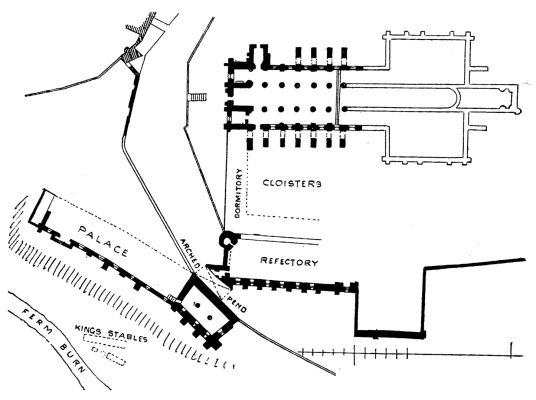 Dunfermline was an important Pictish centre, and then the kings of Scots. The abbey was founded about 1070 by Queen Margaret, wife of Malcolm Canmore, and it was at Dunfermline that they had been married, possibly at Malcolm’s Tower. Margaret was made a saint after miracles were attributed to her, and she and Malcolm were buried in the church. Unlike most saints, Margaret had had a series of successful births and was mother of three kings of Scots: Edgar, Alexander I and David I, who were also buried at Dunfermline, or four if Edmund is included…. 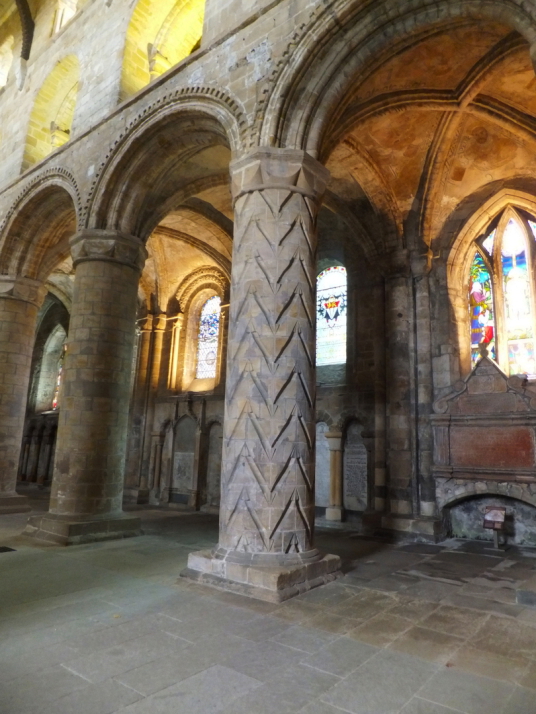 Dunfermline Palace and Abbey: pillars in the nave of the abbey church (© Martin Coventry) 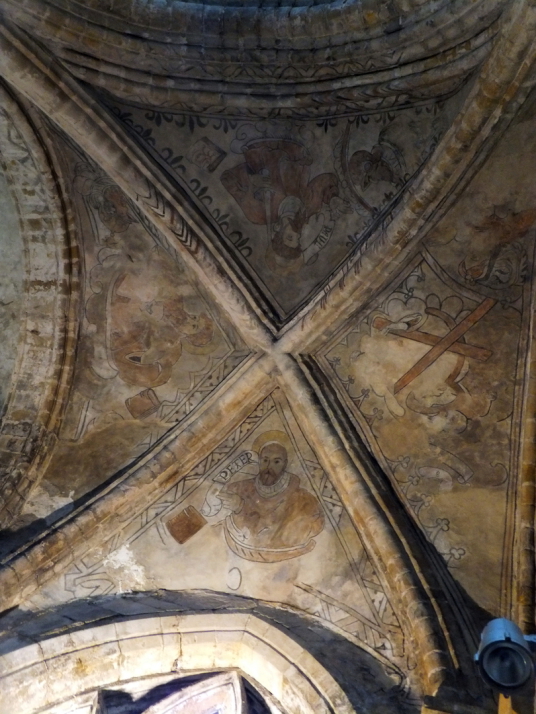 The nave of the abbey church survives, while the choir was demolished and the Abbey Church was built on the site (see below). The nave is a fine building with Romanesque architecture and carved pillars, similar in style to Durham Cathedral, and dating from the 12th century. Some old paintings survive on the ceiling of one of the aisles of the nave. 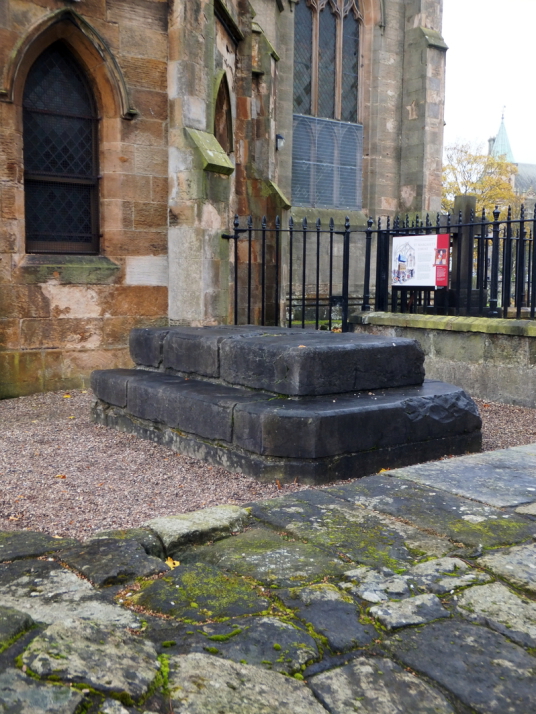 St Margaret's shrine was built at the east end of the choir, and her remains were reburied there. When her tomb was opened her remains are said to have given off a sweet smell. At the Reformation, when saints tombs and relics were being destroyed, Abbot George Durie, the last abbot, was responsible for removing Margaret’s head and taking it to the Continent, where it went to the Jesuits of Douai. The rest of their remains are said to have been sent abroad by Mary of Guise, and went to the church of St Lawrence at Escurial in the care of Philip II of Spain. 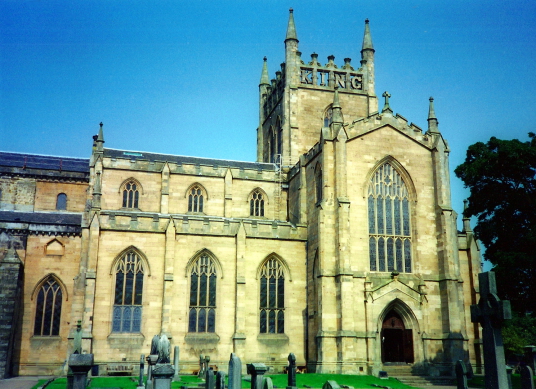 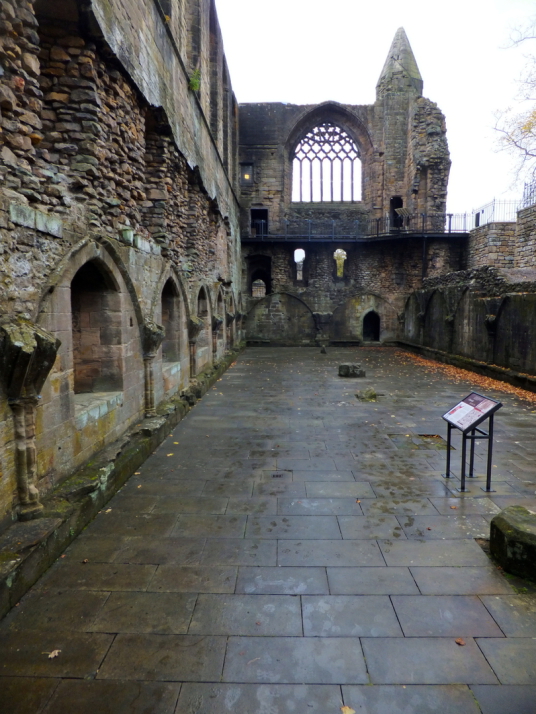 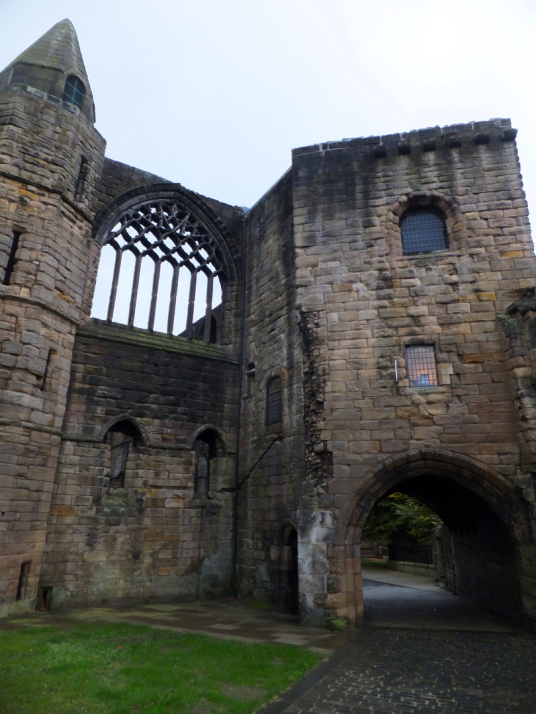 Robert the Bruce’s body – although not his heart – is buried here in which is now the Abbey Church, the‘modern’ parish church at the east end of the nave. Other kings buried at Dunfermline include Donald Bane, Edgar, Alexander I, David I, Malcolm IV, William the Lyon and Alexander III. The abbey was sacked in 1560, and fell into disrepair, although the nave of the church continued to be used by the parish. The ruins of some of the domestic buildings survive, including the impressive refectory block and the gatehouse. 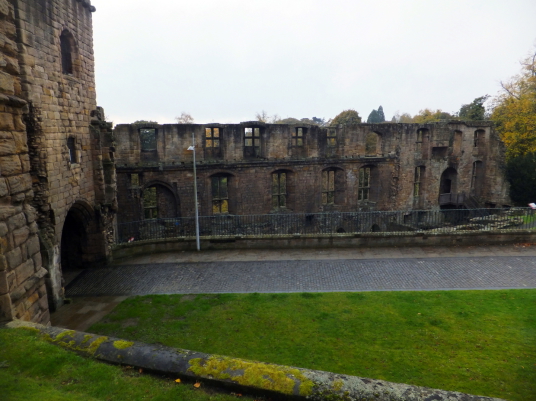 Dunfermline Palace and Abbey: remains of the palace (© Martin Coventry) 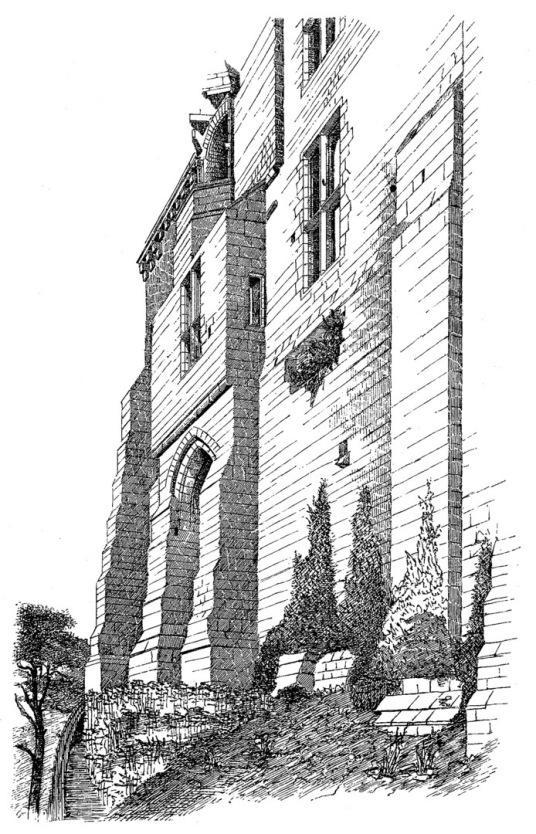 Dunfermline Palace and Abbey: facade of palace (MacGibbon and Ross)

There appears to have been a Royal Palace here from the 14th century, when Edward I stayed here in 1303-4, although he described Dunfermline as ‘not a church but a den of thieves’ and had the place sacked and torched. David II was born at the palace in 1323, but it may have been burned by Richard II of England in 1385. It was restored, and James I was born here in 1394. 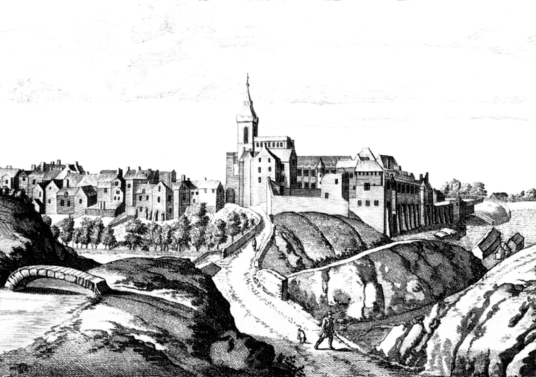 Dunfermline Palace and Abbey (engraving of 1693) 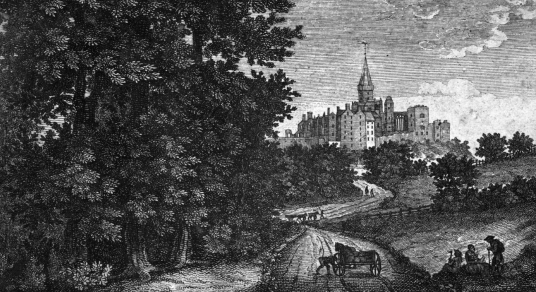 James IV, James V, and Mary, Queen of Scots, all visited. The palace was remodelled in 1587 by Anne of Denmark, wife of James VI, and she built a new palace adjacent to what is now the entrance to Pittencrieff Park at the north-east end of the surviving palace building. This was completely removed in 1797 (but can be seen in the engraving above in front of the church). 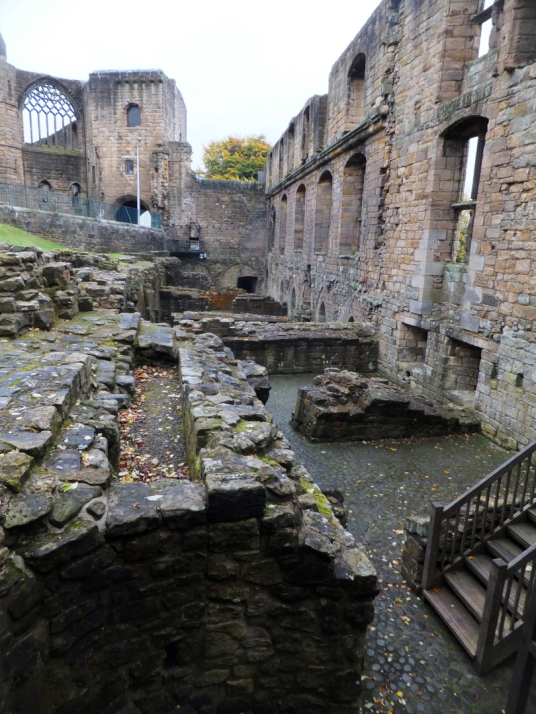 Charles I was born at the Palace in 1600, as was his sister Elizabeth, Queen of Bohemia, the ‘Winter Queen’. When James ascended to the English throne, he and Anne moved to England and did not use the palace afterwards except for his one visit to Scotland in 1617. Charles II stayed at the palace in 1650, but it was abandoned soon afterwards and was unroofed by 1708. The remains are in the care of HES. 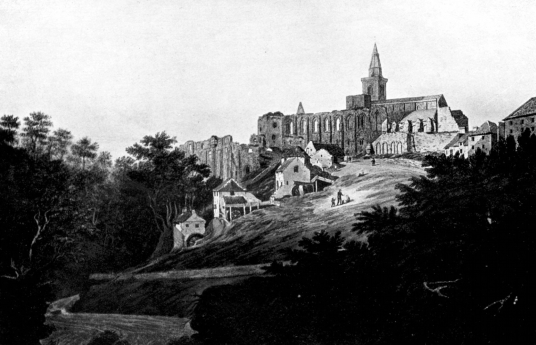 The nave of the church, ruinous domestic buildings of the abbey, and the remains of the royal palace are open to the public. The Abbey Church, the more modern parish church to the east of the nave, is also open in the summer.

Nearby are also Malcolm’s Tower and Pittencrieff House in Pittencrieff Park and Abbot House on the other side of the church.
In 1624 nine-tenths of Dunfermline was destroyed by fire.

The abbey was used as a location in the Netflix movie Outlaw King, about Robert the Bruce. 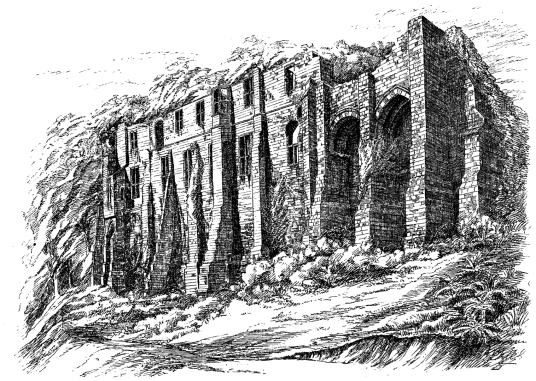 There are stories that the palace and abbey buildings are haunted. One tale is of the apparition of a well-dressed lady seen wandering through the ruin, identified by some as the bogle of Anne of Denmark, who remodelled the palace in 1587. There is also said to be the white glowing ghost of a woman, observed looking down from the upper part of the palace, as well as another phantom, a dark hooded figure, spotted sometimes in the graveyard of the abbey church.