Cardoness Castle, a plain but impressive tower house, long held by the turbulent MacCullochs, in a prominent spot with a once comfortable interior, near Gatehouse of Fleet in Dumfries and Galloway. 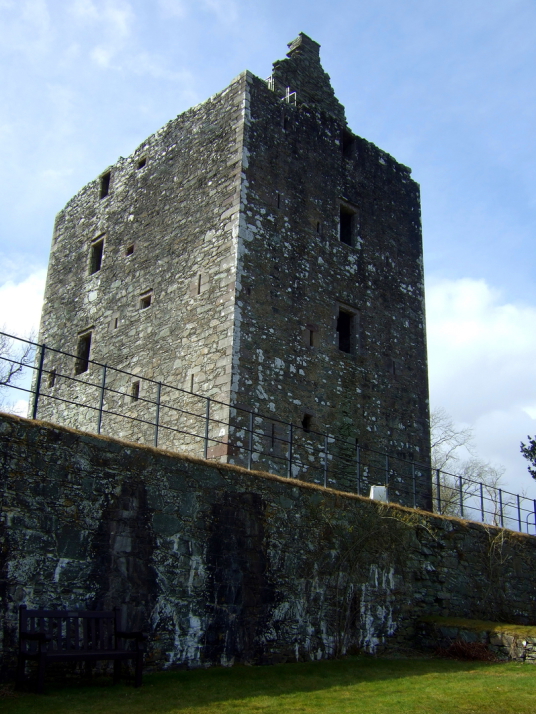 Galloway: About 0.75 miles south-west of Gatehouse of Fleet, just west of B796 north of junction with A75, west of the Water of Fleet, at Cardoness Castle. 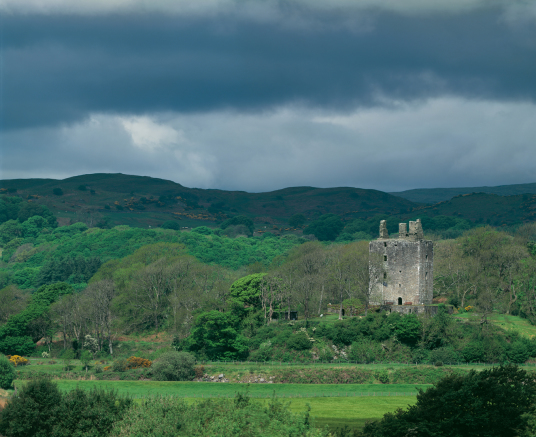 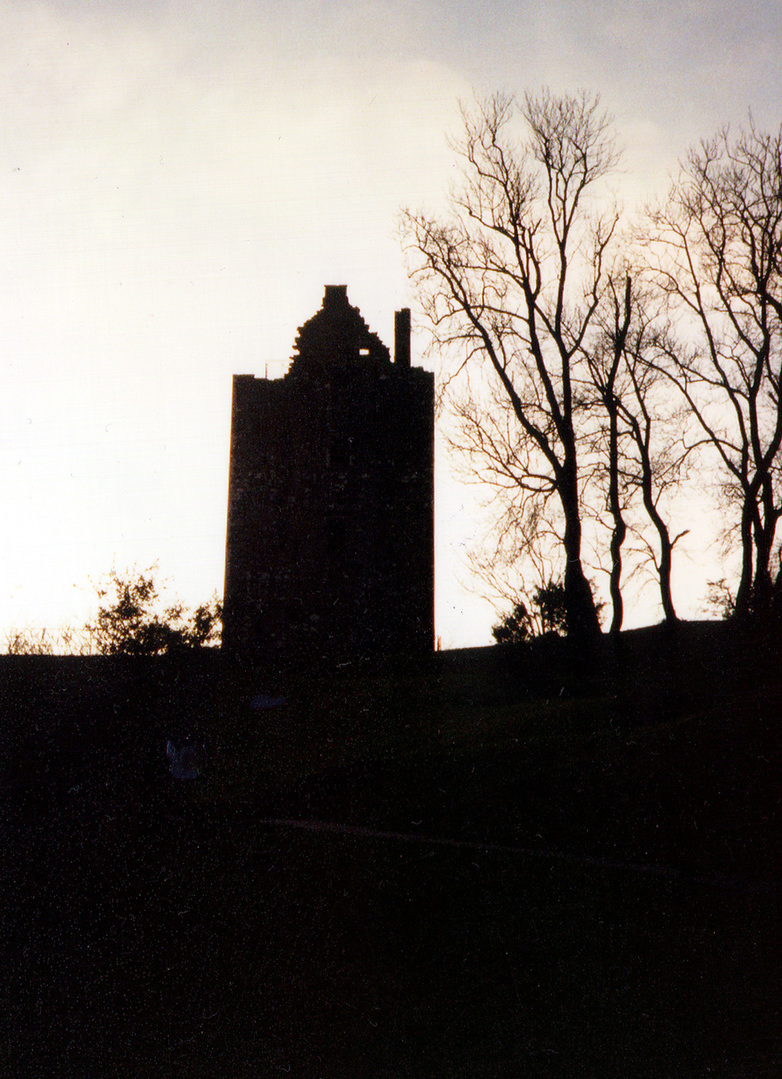 Standing on a rocky mound above the Water of Fleet, Cardoness Castle is a late 15th-century rectangular tower of six storeys and formerly a garret within a flush parapet. The walls are up to 8 foot thick. Remains of (probably recreated) vaulted outbuildings survive in the ruined courtyard, which was once defended by a strong wall, although this is mostly gone. 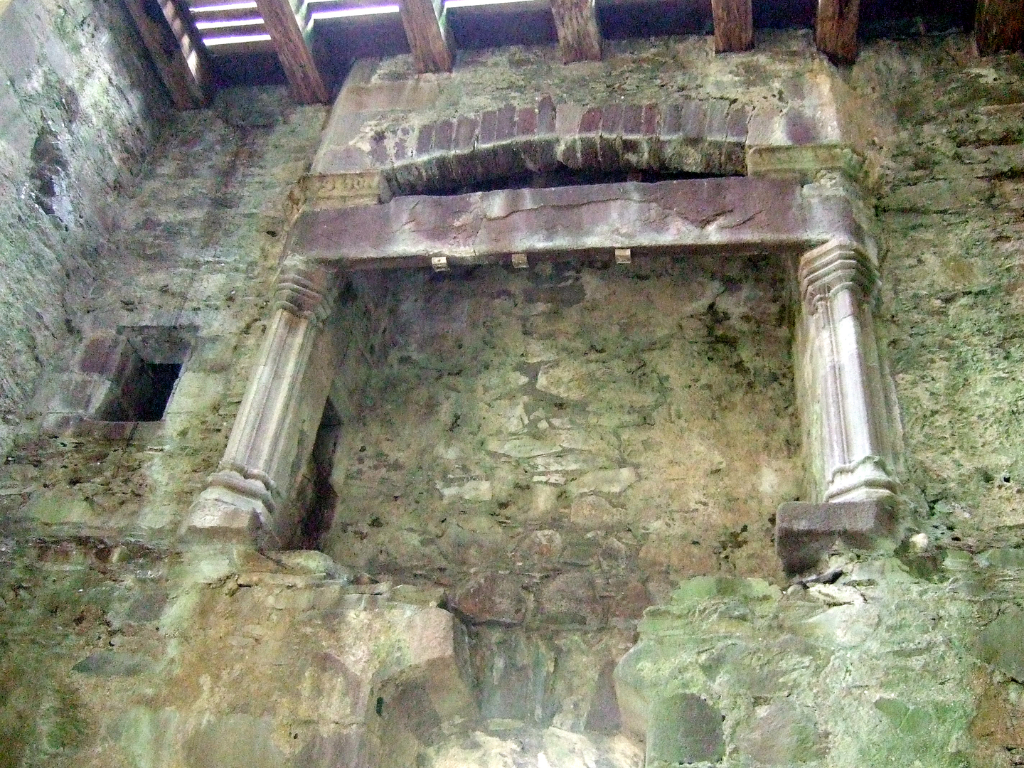 The entrance leads through a mural lobby to a guardroom and to a turnpike stair which climbs to the roof. The basement is vaulted and consisted of two rooms, and there is a claustrophobic two-storey pit-prison. The hall, on the first floor, has a wide moulded fireplace and fine carved cupboards. A straight stair, from the turnpike stair, leads to the second floor, which has two rooms, also with fine fireplaces. There are good views from the top of the tower. 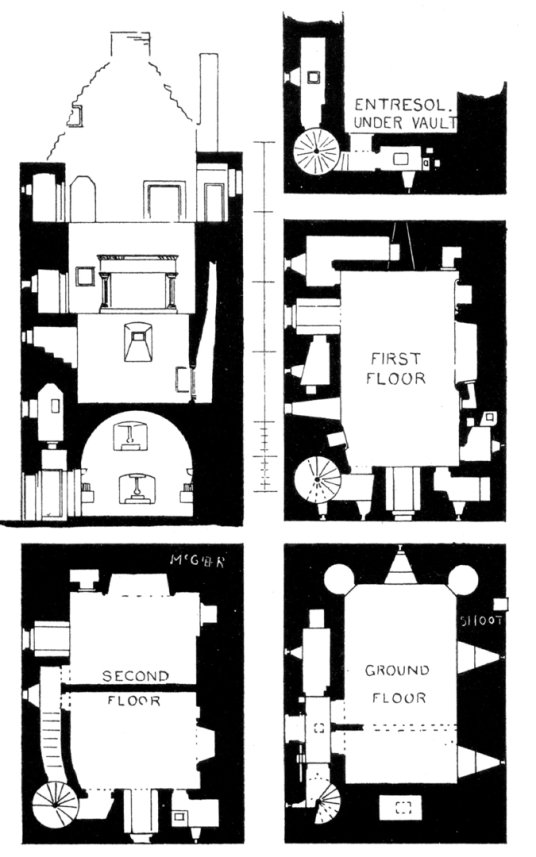 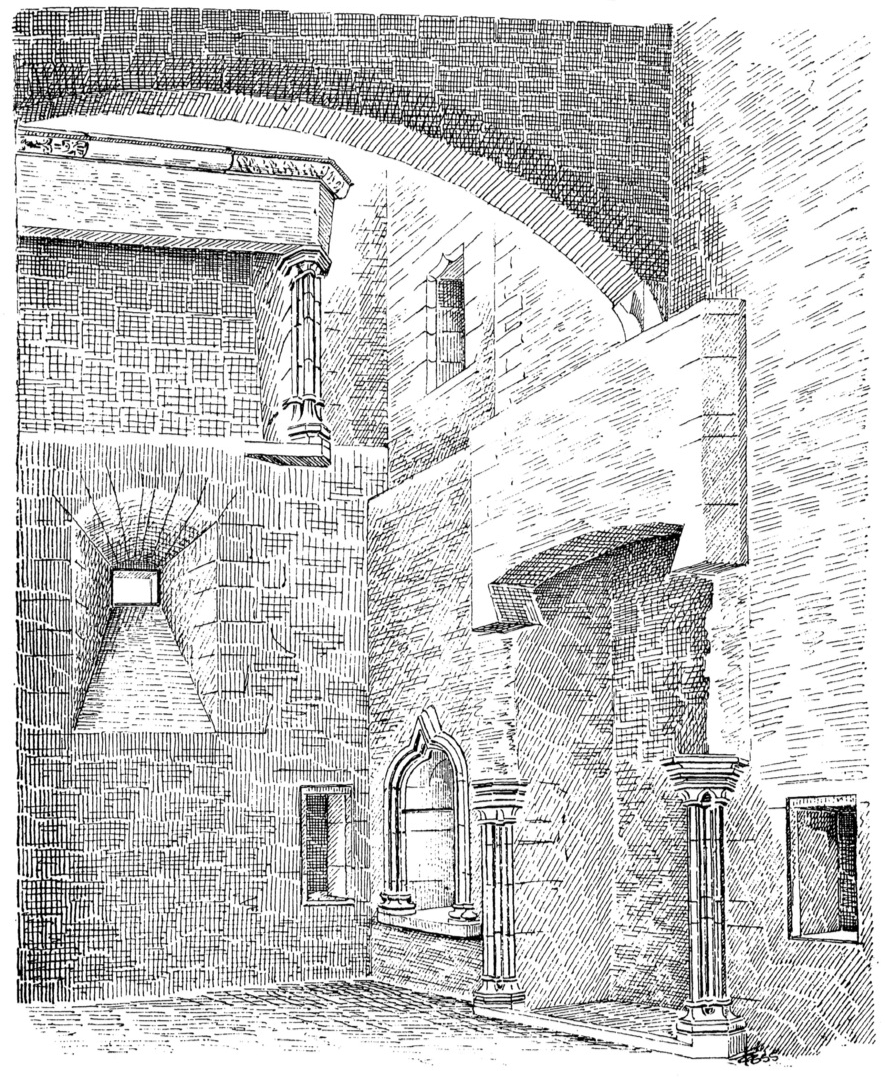 The site is marked as ‘Kardeness Cast.’ on Blaeu’s map of the middle part of Galloway.
The lands were held by the Cardoness family but, after most of them had reputedly drowned while out skating on a frozen loch, passed by marriage to the MacCullochs. This was in around 1450, and the MacCullochs built the castle. 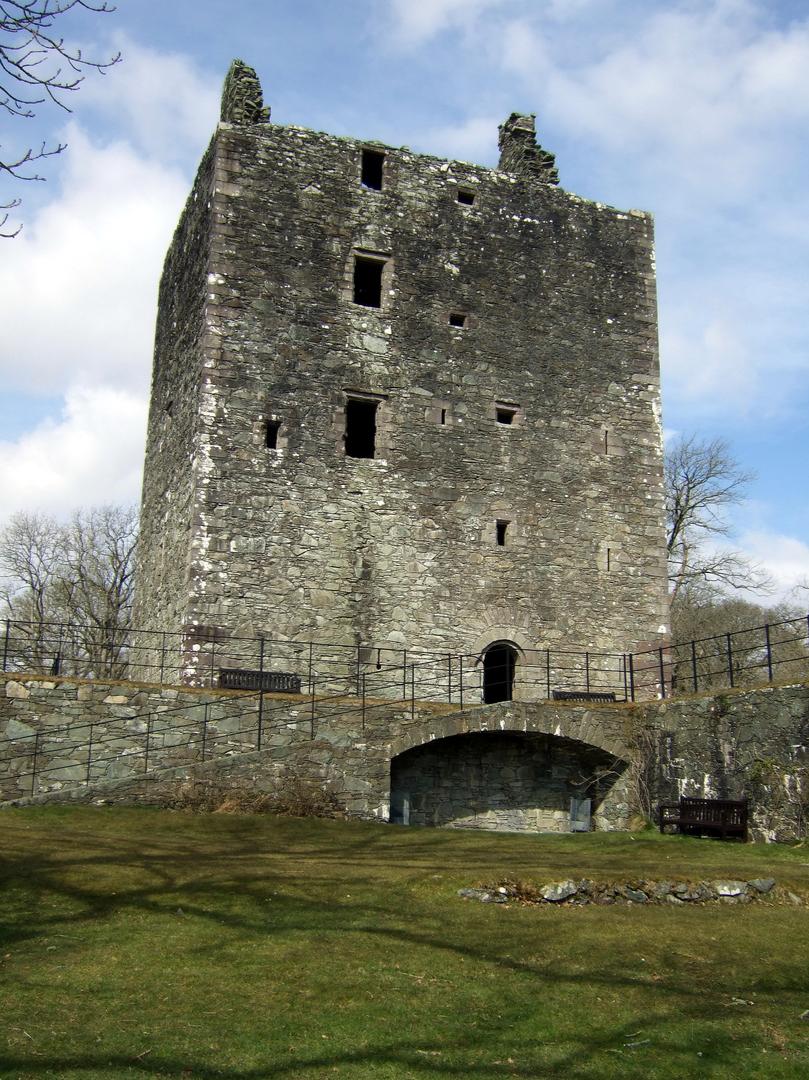 They were an unruly and violent lot. James MacCulloch, 2nd laird, being outlawed in 1471 and again in 1480. His successor, Ninian, robbed his father’s widow of all her goods and he may have been executed in 1509. Thomas MacCulloch, his son, besieged the Adairs of Dunskey in 1489, and soon after plundered the castle of his kinsman, MacCulloch of Adair. Thomas died at the Battle of Flodden in 1513. 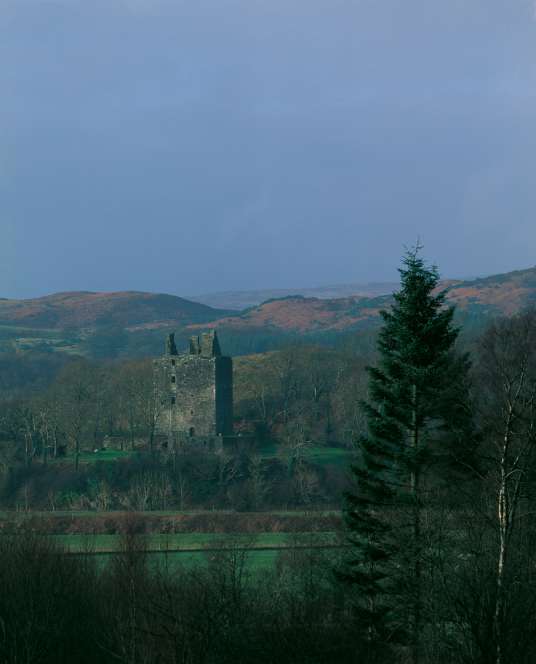 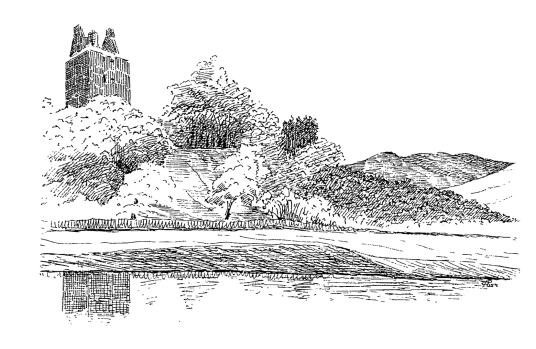 The property went to Alexander MacCulloch in 1516, and he raided the Isle of Man in the 1530s, commemorated by the Isle of Man verse: ‘God keep the good corn, the sheep, and the bullock, From Satan, from sin, and from Cutlar M'Culloch’. He also dragged Marion Peebles, widow of the then Gordon owner, from her sick bed and left her on a dung heap, there to die. 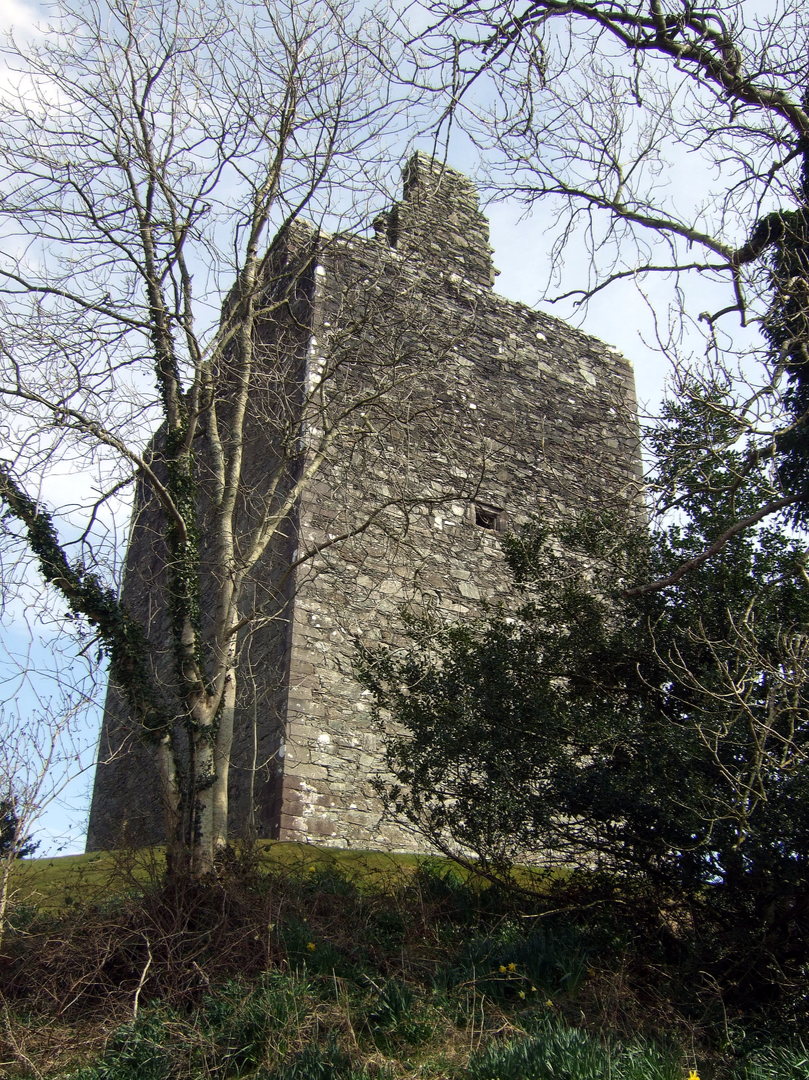 The last of the family was Sir Godfrey MacCulloch, who shot William Gordon of Buck (or Bush) o’ Bield in 1690, fled abroad, returned and was spotted in St Giles in Edinburgh. He was beheaded in 1697 by the Maiden, an early Scottish guillotine preserved in the National Museum of Scotland in Edinburgh, and is said by some to be the last person executed in this manner in Scotland. 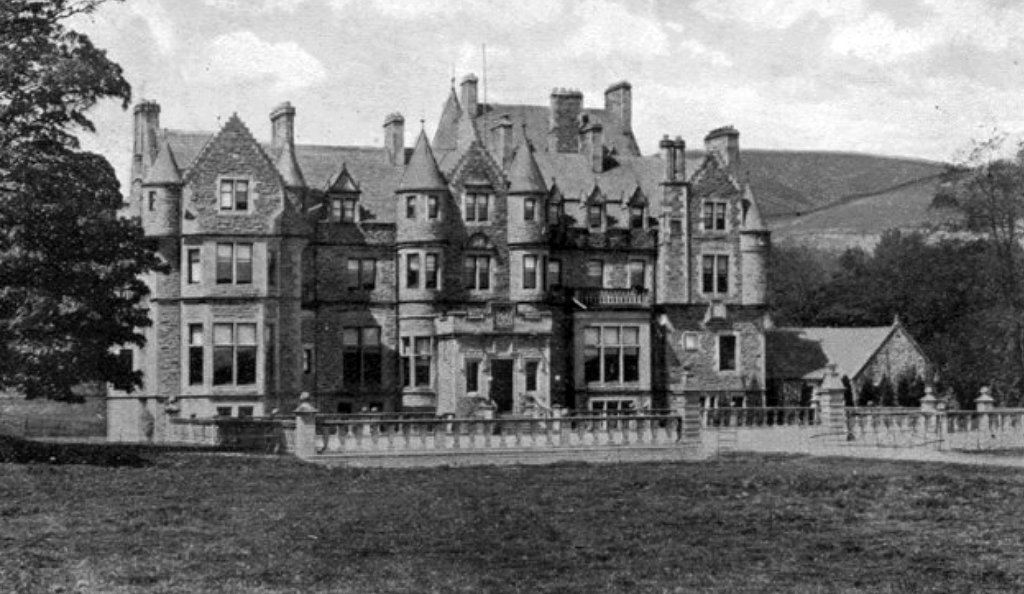 Cardoness had passed because of debt to the Gordons in 1629, and was later held by the Maxwells, Stewarts, Murray Baillies of nearby Cally, and then went back to the Maxwells. Cardoness House [NX 566536], some 2 miles away, dates from the end of the 19th century, and was a large baronial mansion, although somewhat reduced about 1960. It was held by the Hannays in the 19th century, and part of the estate is used as a holiday park with static caravans.

The woods around the castle are home to red squirrels, and Gatehouse of Fleet is a pleasant village with places to eat and visit. 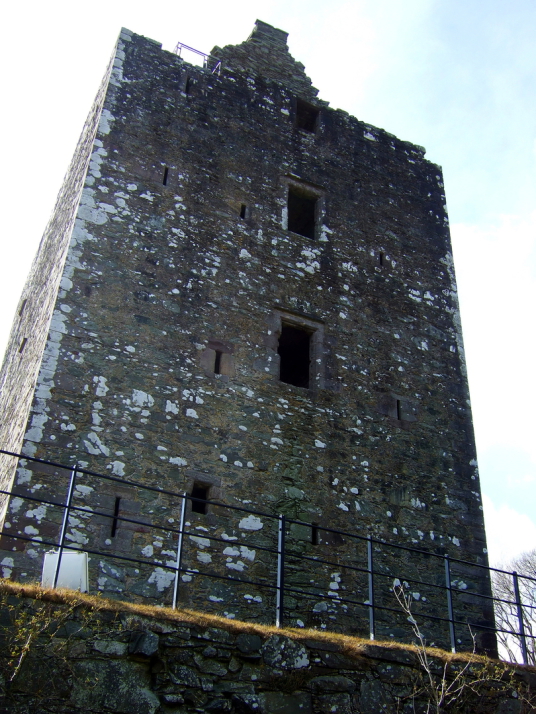 There are stories of a curse which afflicted the owners of Cardoness Castle, leading each family to eventual ruin. And also of apparitions having been seen within the walls on at least five occasions, including that of a lady, reputedly seen in the hall. Another story is that a man was hanged in the area of the prison, and that his ghost also haunts the place.