Dryburgh Abbey is a fantastic and scenic ruinous abbey, burial place of Walter Scott and set in a peaceful spot by the River Tweed, near Melrose in the Borders in the southeast of Scotland. Dryburgh Abbey House replaced the Commendator's House in the abbey, and Mantle House, now the Dryburgh Abbey Hotel, stands close by. 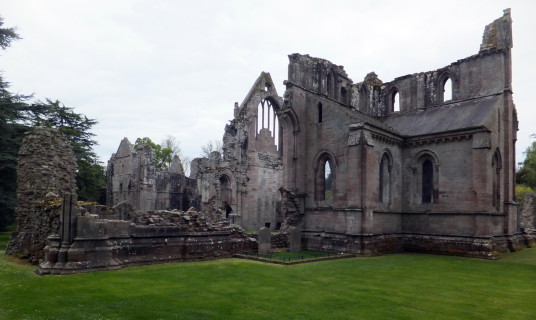 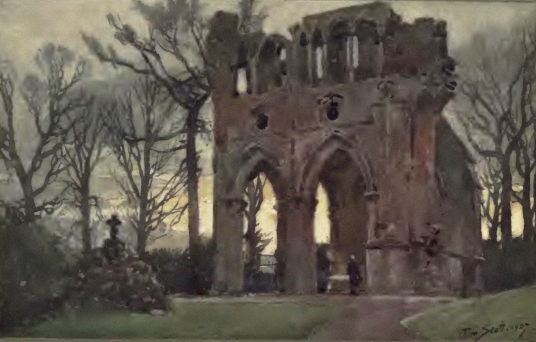 Borders: About 3 miles east and south of Melrose, on minor road south of B6356 at Dryburgh, just east of the River Tweed, at Dryburgh Abbey.

Dryburgh Abbey House is a private residence but can be seen from the abbey and the Borders Abbey Way.

It is unusual and confusing to have two houses so close together and called virtually the same so ambiguity has often arisen in accounts of the properties. 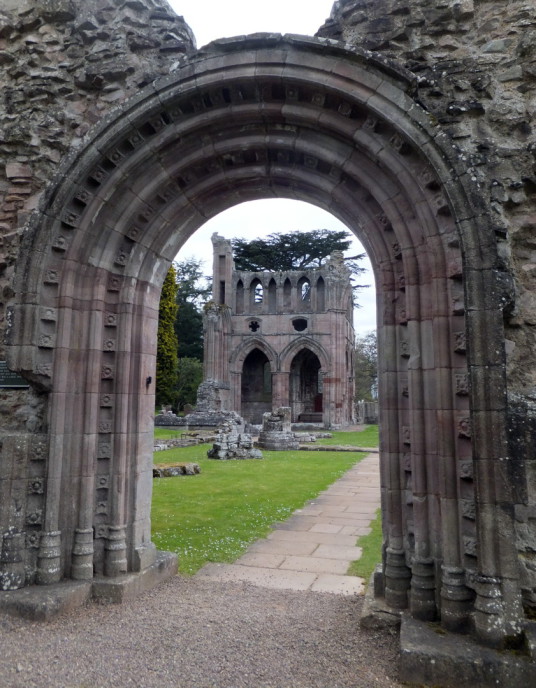 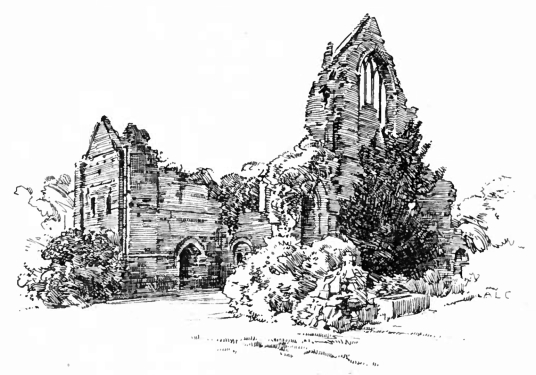 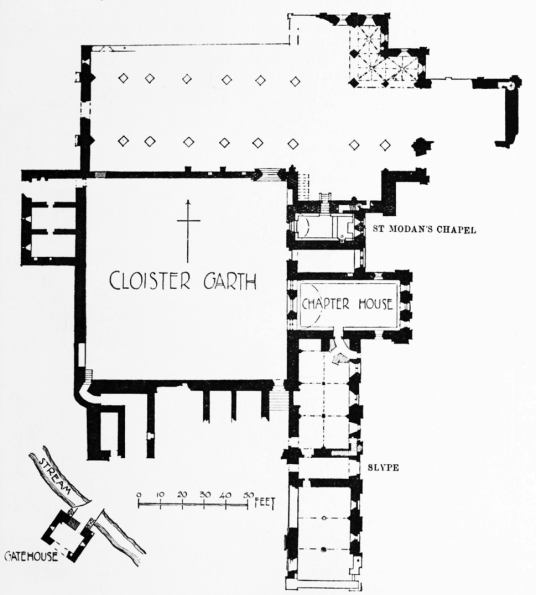 A picturesque and substantial ruin in an attractive spot by the Tweed, the abbey was founded by David I as a Premonstratensian establishment, dedicated to St Mary. Most of the buildings date from the 12th and 13th centuries, and part of the church survives, as do substantial portions of the cloister, including the fine chapter house, parlour and vestry. There are some fine carved stones, including a panel with Adam and Eve and St Andrew. 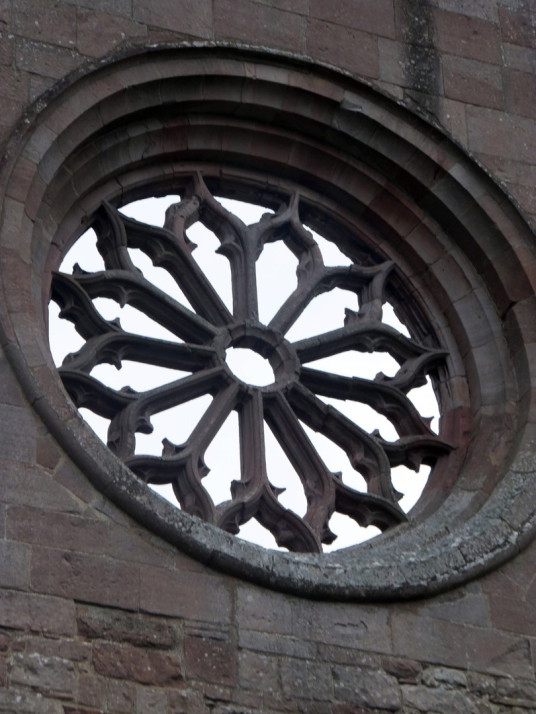 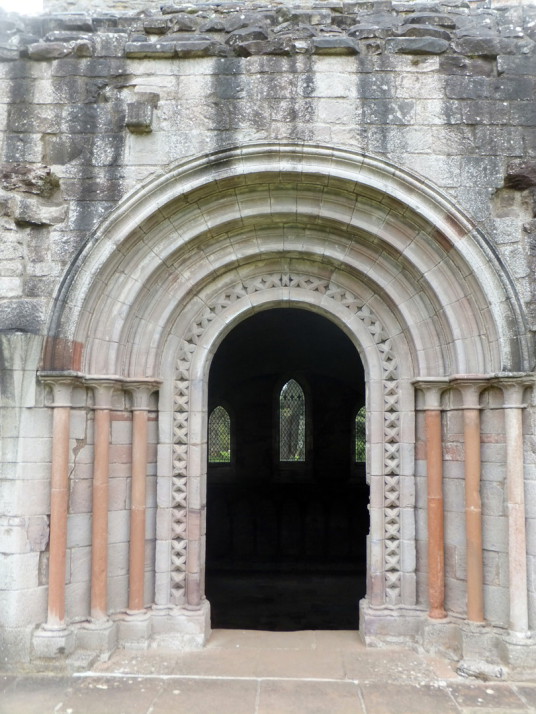 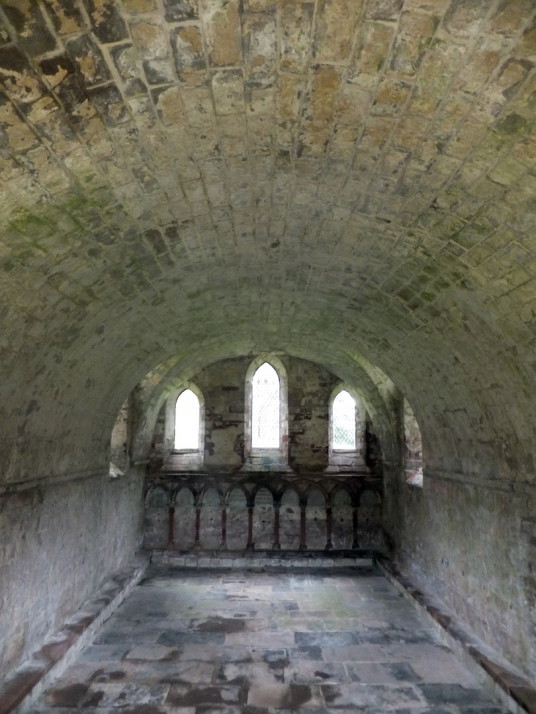 The abbey was burnt by the English in 1322 and 1385.The lands passed to the Erskine family after the Reformation, and the family were commendators. The abbey had been burnt in 1544, again by the English, and was never rebuilt, although it was occupied by monks until at least 1584. 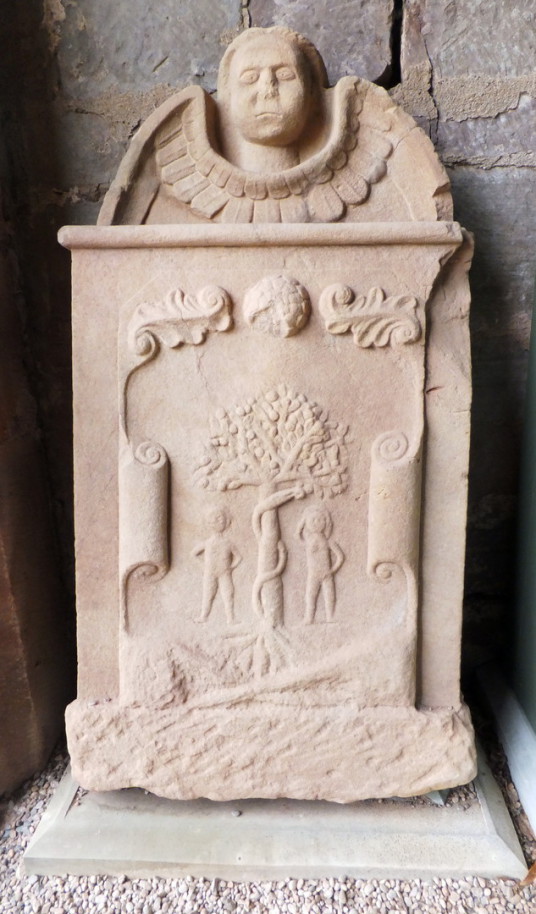 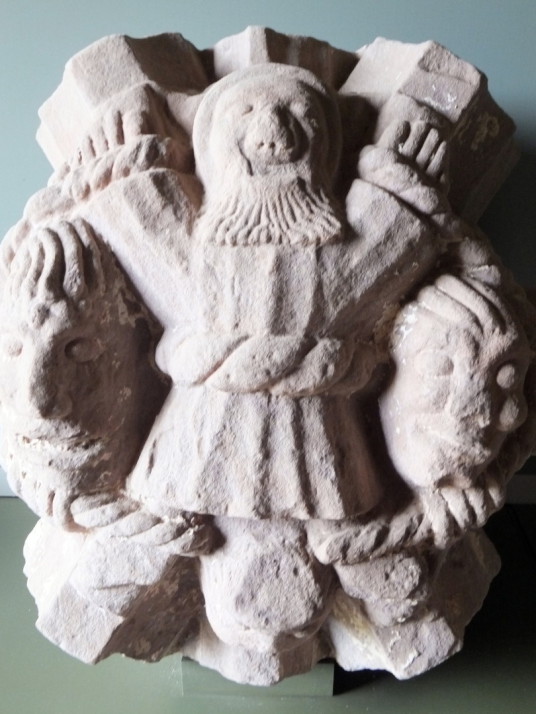 The Commendator’s House, for the Abbey’s secular owners, was created in the 16th century by altering the dormitory of the abbey, immediately over the chapter house, into a comfortable but fortified house. New windows were inserted, and an entrance was made from the east side. The walls were pierced by at least one shot-hole. This residence was replaced by Dryburgh Abbey House (see below), and the abbey was part of the designed landscape. There are several old impressive trees, including the Dryburgh Yew, said to be more than 800 years old, and monumental cypresses. Bats roost in the trees and the abbey ruins. 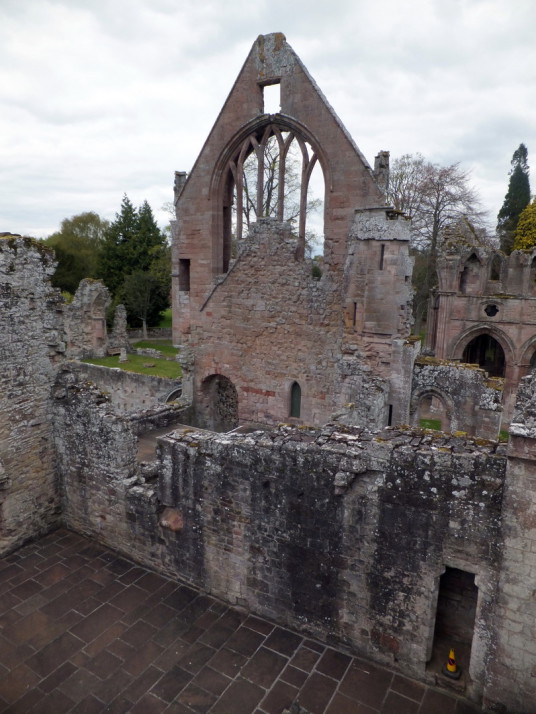 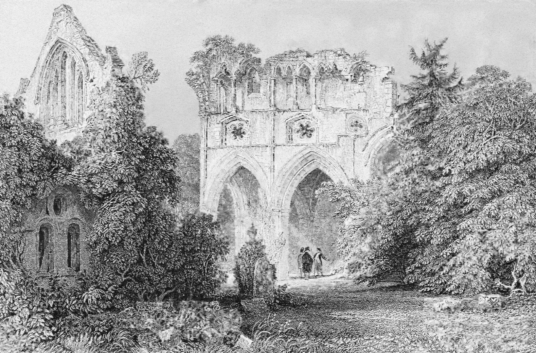 David Erskine, Lord Cardross, stayed in the abbey until his death in 1671. The property was later sold to the Scotts of Ancrum, and then back to the Erskines in 1786, when it was bought by Sir David Erskine, 11th Earl of Buchan, and he was buried in the sacristy on his death in 1829. His friend, Sir Walter Scott (see Abbotford House, was buried in the north transept in 1832, then Douglas Haig, Earl Haig, (see nearby Bemersyde) when he died in 1928. 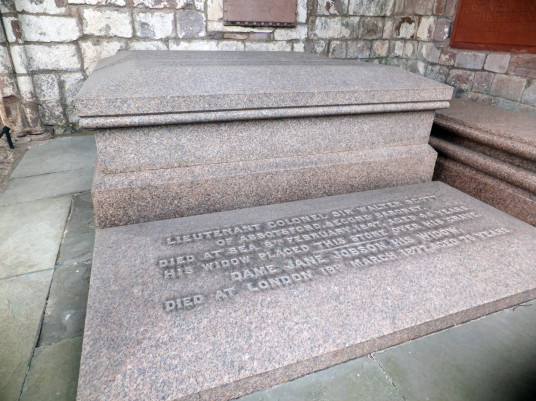 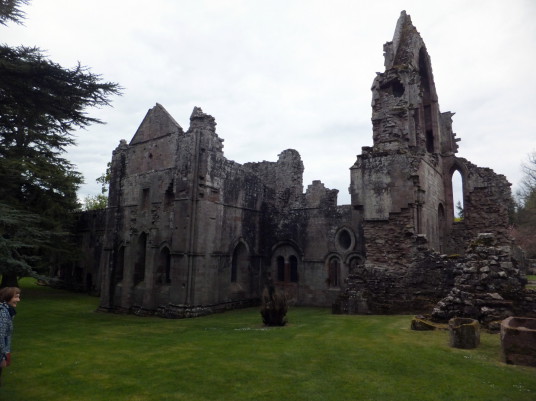 The abbey ruins are said to be haunted by ghostly monks, who had deceived a dying man into leaving them all his money. 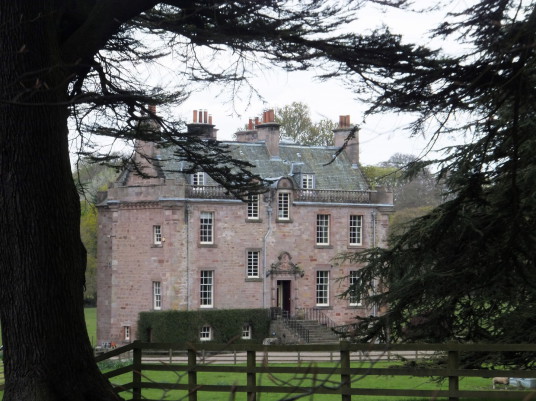 Site of tower house, which dated from 1572 or earlier but was demolished in 1784. This was replaced by a house in the 18th century, which was extended in 1839 and then burnt out and rebuilt in the 1890s. The building rises to two storeys with a basement and attic, and has a parapet and open rounds.

There is an old doocot, which may date from the 16th century, but was converted into a pumphouse in 1828. 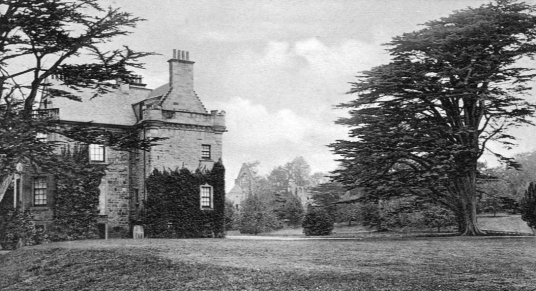 Dryburgh Abbey House by the ruins of the abbey (old postcard)

The property of Dryburgh Abbbey (see above) was held by the Erskine Lords Cardross after the Reformation, then by the Erskine Earls of Buchan from 1768 and they built the mansion. The Scott Plummers, formerly of Sunderland Hall, now apparently live here.

Borders: About 3 miles south-east of Melrose, on minor road west of B6356, 1 mile east of St Boswells, east of River Tweed, by Dryburgh Abbey, at Dryburgh Abbey Hotel (Dryburgh House). 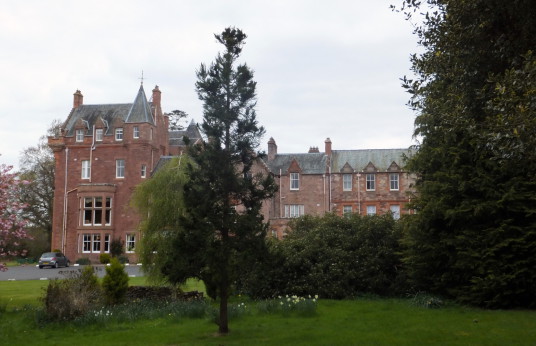 Located in 101 acres of fine wooded grounds by the River Tweed, Dryburgh Abbey Hotel (not to be confused with Dryburgh Abbey House – see above), a castellated mansion formerly known as Dryburgh House, dates from 1845 and was remodelled in 1892, but probably stands on or near the site of a much older building. This had also been identified as Mantle House, although it is not certain where this building was. This site does not appear to be marked on maps until Armstrong's map of Berwickshire on 1771, although this certainly predates the present house. 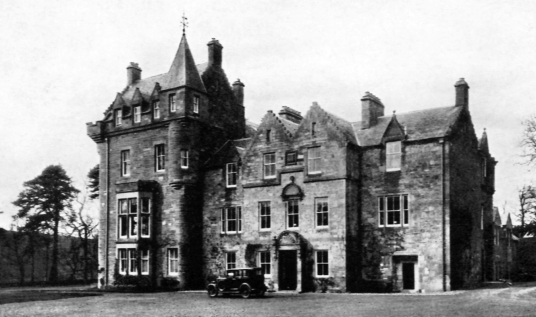 This property (and not the abbey) appears to have been held by the Haliburtons of Dryburgh in the 16th, 17th and 18th centuries, although it is not certain to which lands this pertains. The house was home to Lady Grisell Baillie in the 19th century, and the Baillie Lords Jerviswood held the property until 1929 until it was sold and was then used as a hotel. 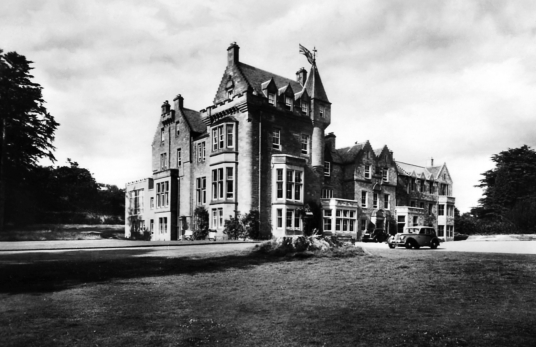 The house is said to be haunted. A young lady of the house fell in love with a monk, but on hearing of the monk’s earthly love, the abbot had the poor man killed. When the young lady found out she threw herself into the Tweed and was drowned. Her apparition, a ‘Grey Lady’, has reputedly been seen on the suspension bridge [NT 589321] and in outbuildings of the hotel.