Thirlestane Castle, a fabulous old castle and mansion with many sumptuous chambers to explore, a cafe, shop and woodland walk, long held by the powerful Maitlands of Lauderdale, and in a lovely spot near Lauder in the Borders in southern Scotland. 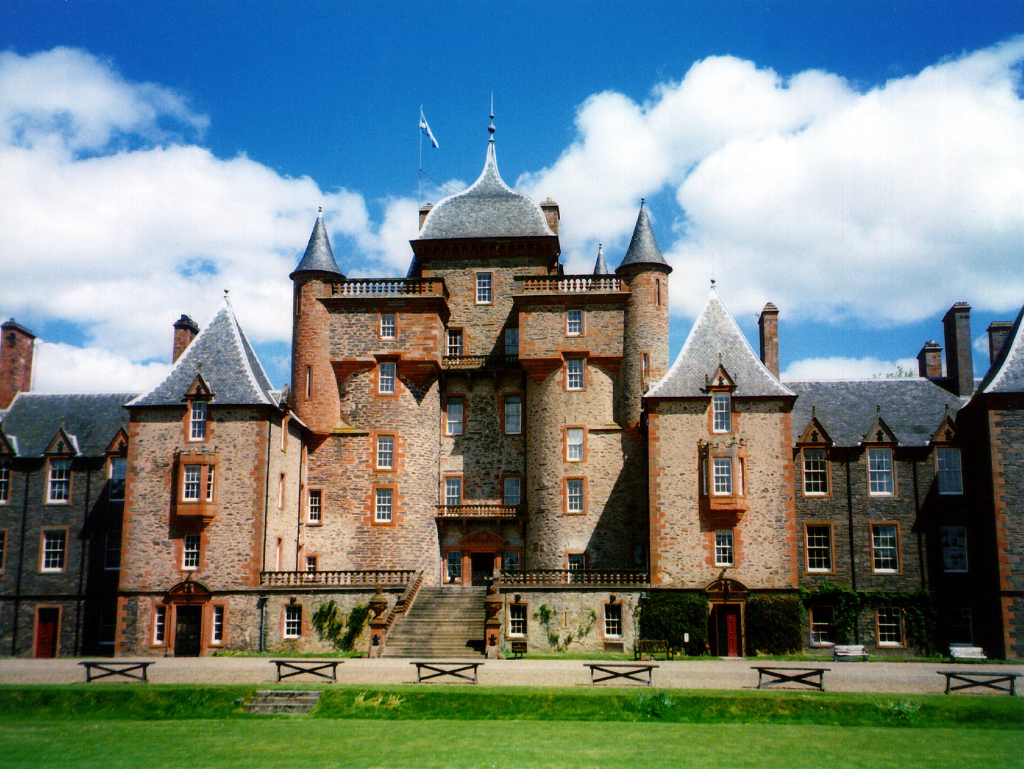 Borders: Just east of Lauder, on minor road north of B6362 east of junction with A68, just south-west of meeting of Leader Water and Earnscleugh Water, at Thirlestane Castle. 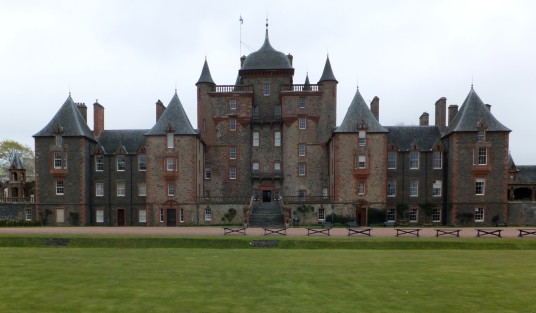 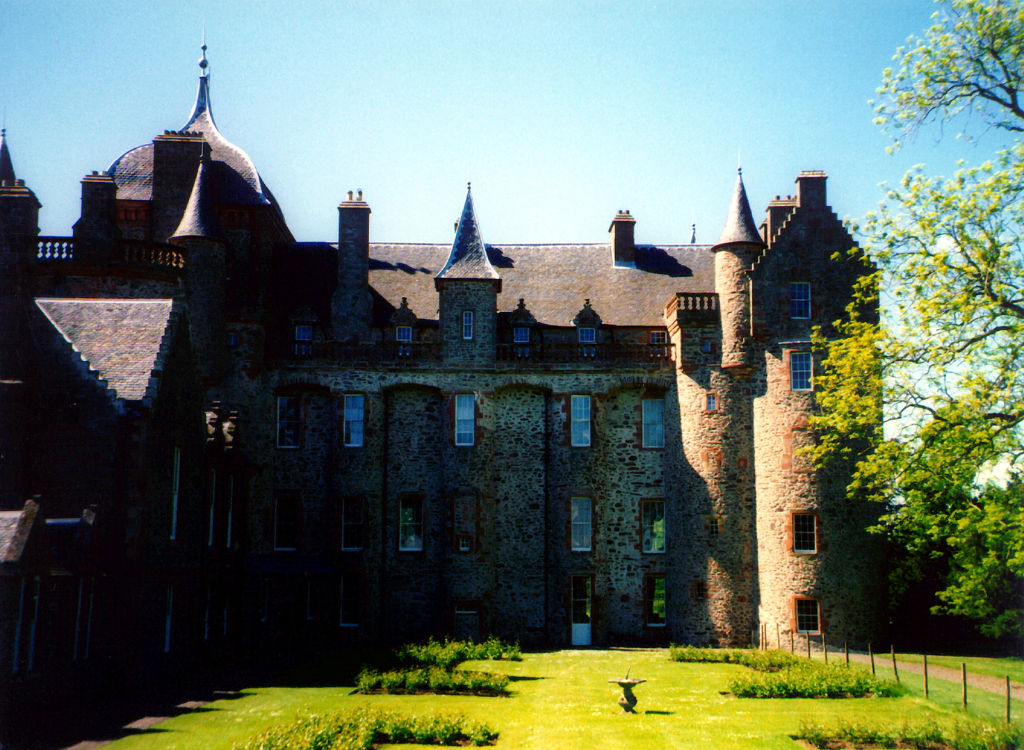 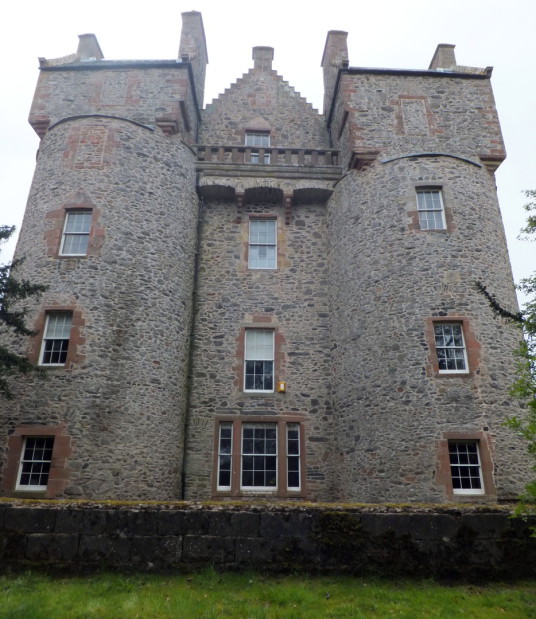 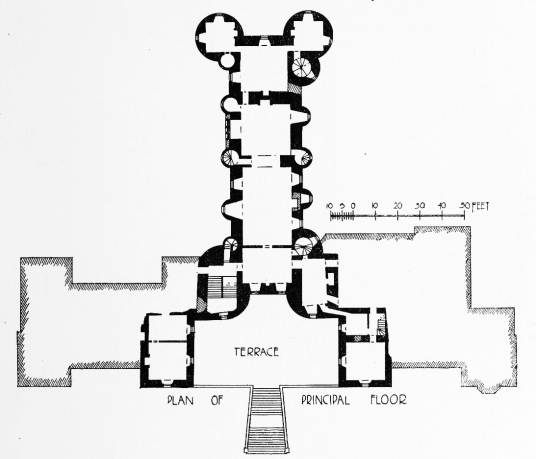 A magnificent building in a fine setting, Thirlestane Castle is a 16th-century castle, the oldest part of which is a rectangular tower house or block of three storeys and an attic, which have a large round tower at each corner. The walls are as much as 13 foot thick, and the basement was vaulted. 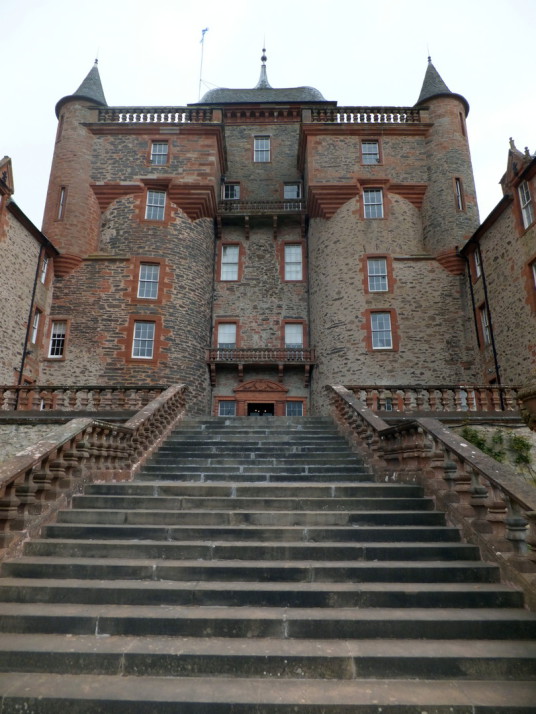 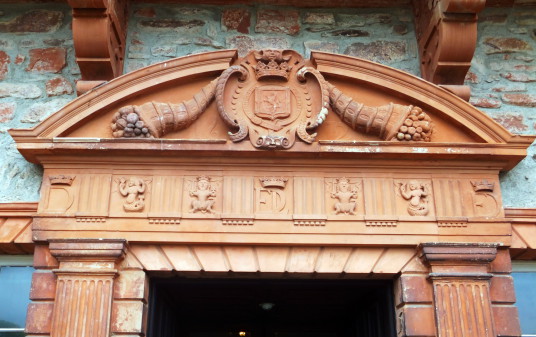 The castle was considerably enlarged in the 1670s by Sir William Bruce and Robert Mylne, with the rebuilding of the main block, heightening it to six storeys, and the addition of round turrets. Three semi-circular towers along each side contain stairs, as do many of the turrets. Parapets are supported on arches running along each side. 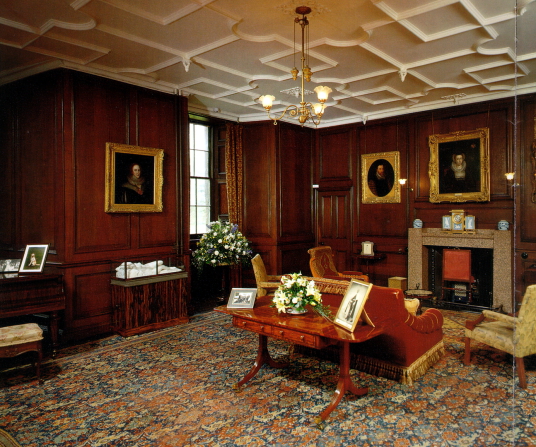 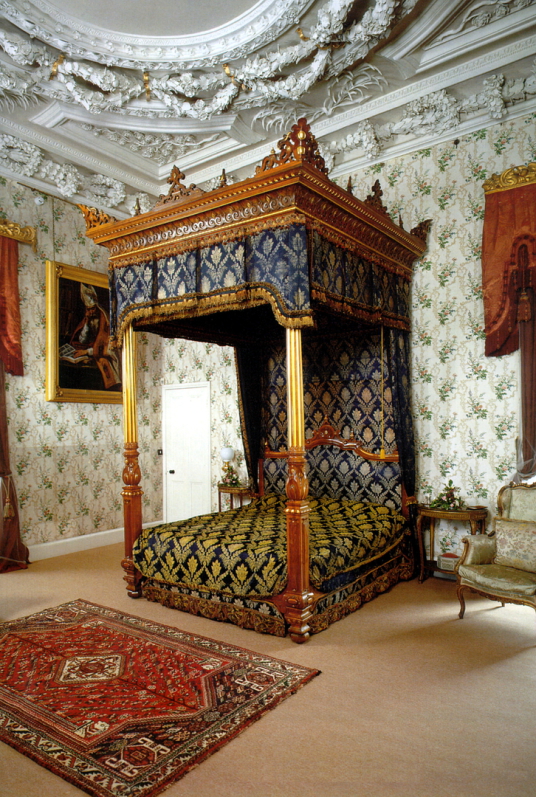 A symmetrical forecourt was also added, with three-storey wings, which were extended in the 19th century. The 19th-century extensions were designed by William Burn and possibly by David Bryce. 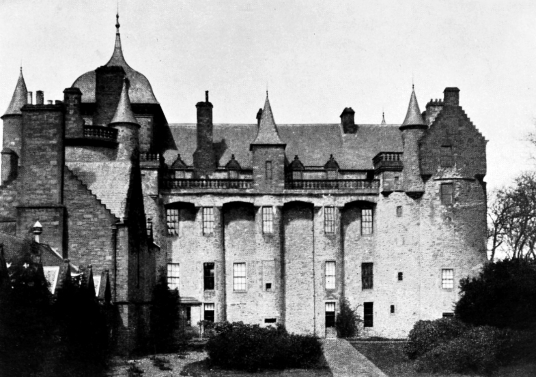 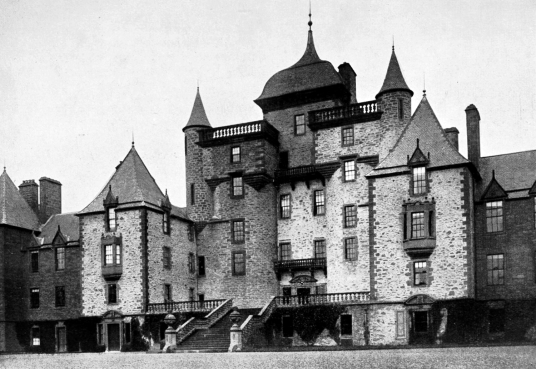 A fine 17th-century plaster ceiling survives on the second floor, executed by George Dunsterfield and Dutch craftsmen, as do splendid Baroque plaster ceilings elsewhere. There are many paintings and family portraits. 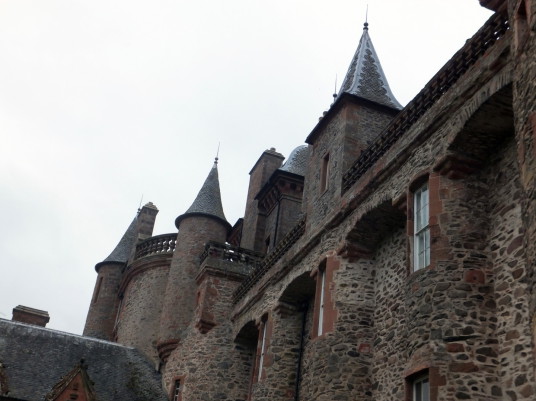 ‘Thirlestane Castle’ is marked as a large castle with tower in an enclosed and wooded park on Blaeu’s map of Berwickshire. The present castle probably replaced a motte and bailey castle. 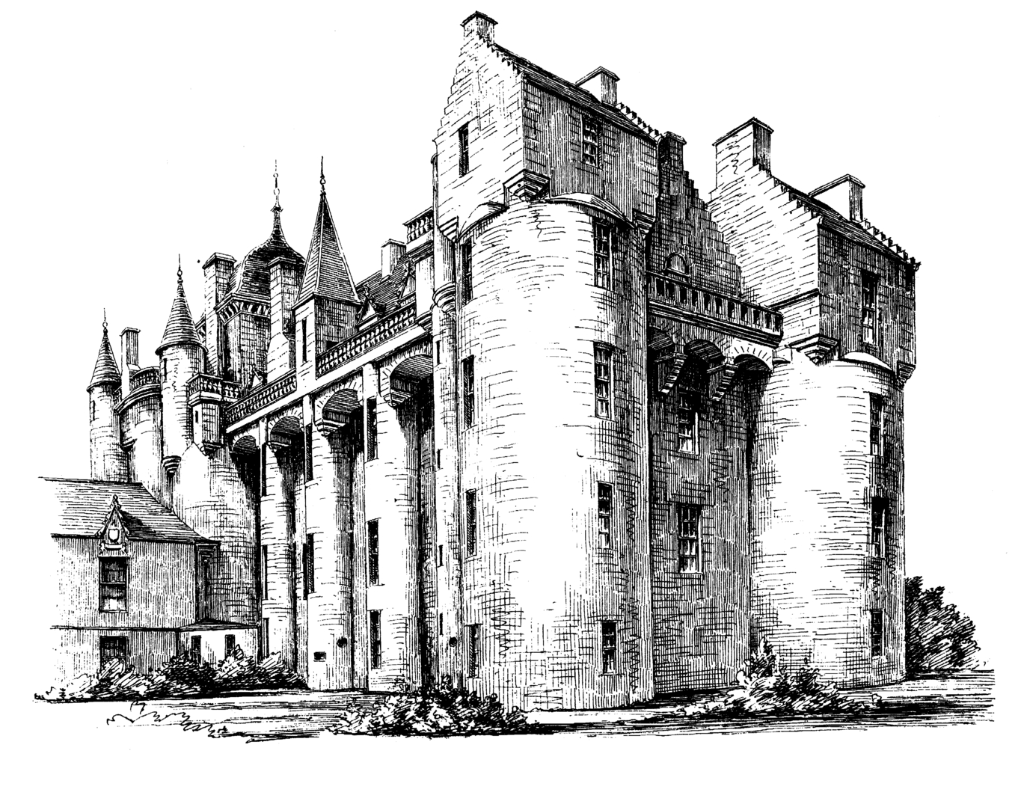 The original castle of the Maitlands stood two miles away at Old Thirlestane. The present castle was built by Sir John Maitland, James VI’s chancellor, but it was John Maitland, 2nd Earl of Lauderdale, who had the house remodelled in 1670. Maitland was made Duke of Lauderdale by Charles II in 1672, and was Secretary of State for Scotland from 1661-80. He fell from favour and was eventually replaced after the Covenanter uprising which ended with their defeat at the Battle of Bothwell Brig. 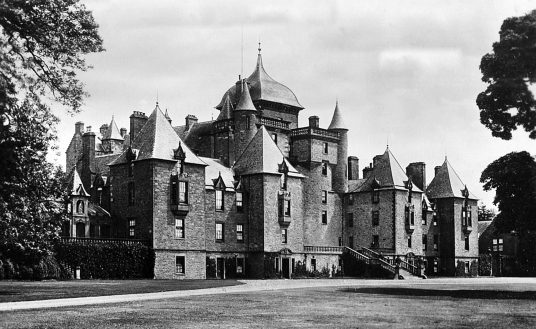 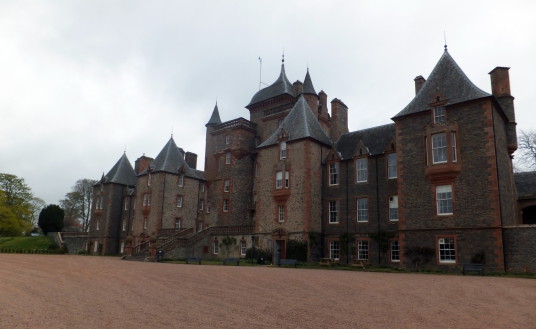 Maitland had no legitimate male heirs and the Dukedom (but not the Earldom) became extinct on his death. Most of the furniture dates from the 19th century after Elizabeth, the widowed duchess, ran off with 14 wagonloads of valuables to her own home Ham House, only the last cart being stopped by the folk of Lauder on realising what she was doing. 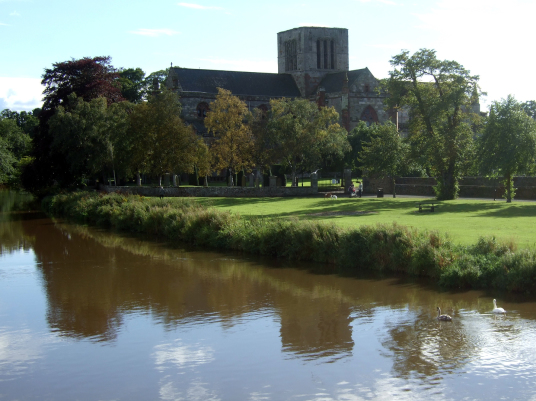 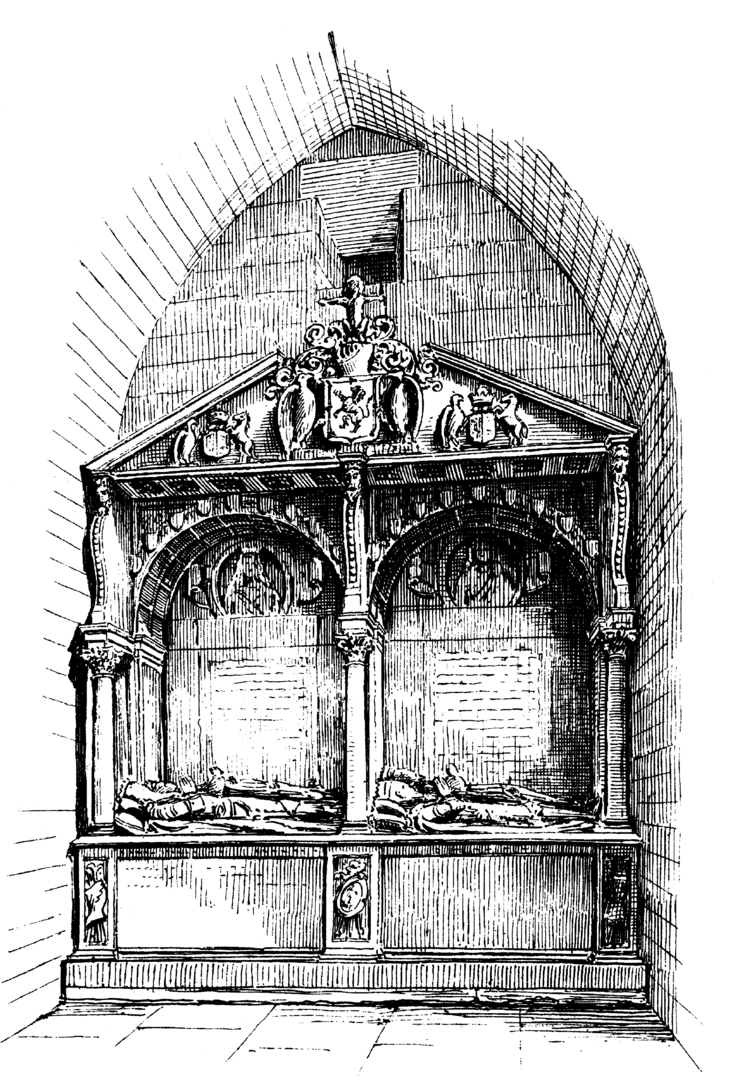 Maitland's ghost is said to haunt a chamber in Thirlestane, as well as St Mary’s Kirk in Haddington, where he is buried, his tomb marked by an elaborate carved memorial. For some time it was thought that supernatural manifestations were responsible for the coffins moving around in the burial vault beneath the tomb, but it was later found that the room flooded and the waters of the Tyne were the real culprit. 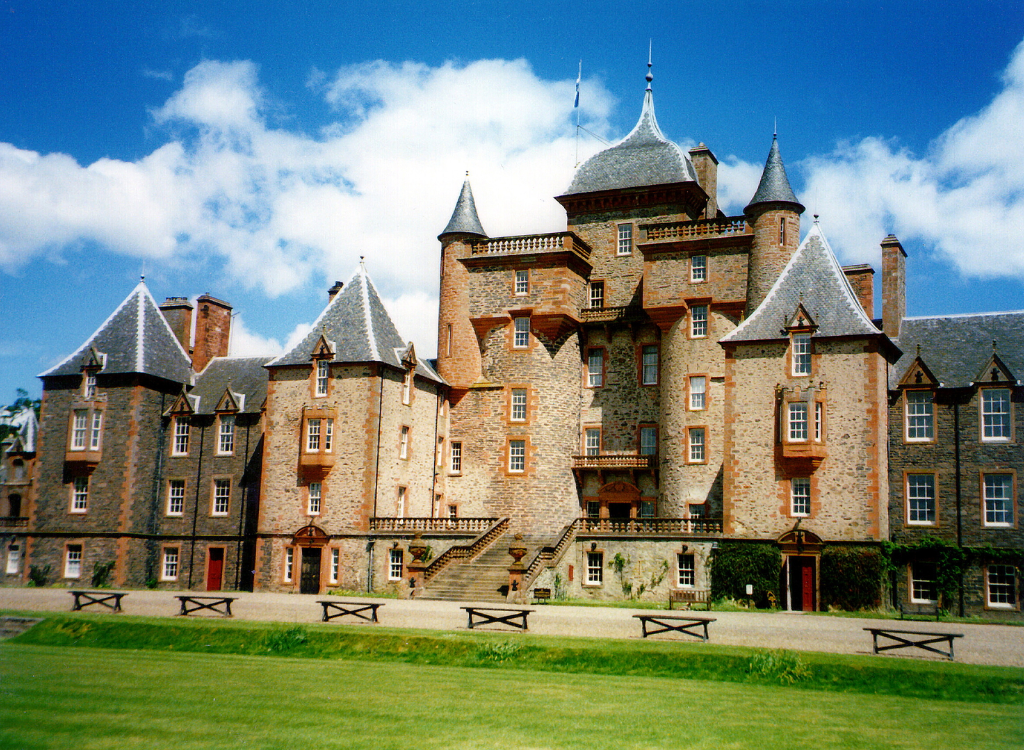 Bonnie Prince Charlie stayed here in 1745 on his way south, and the chamber he stayed in may be visited, as can the the main chambers, nurseries, kitchen, scullery and launderies, although there is still a programme of renovation. Thirlestane Castle housed St Hilary’s School from Edinburgh after it had been evacuated from Edinburgh during World War II, a book has been written about the time (Amazon), which is also available in the castle shop. 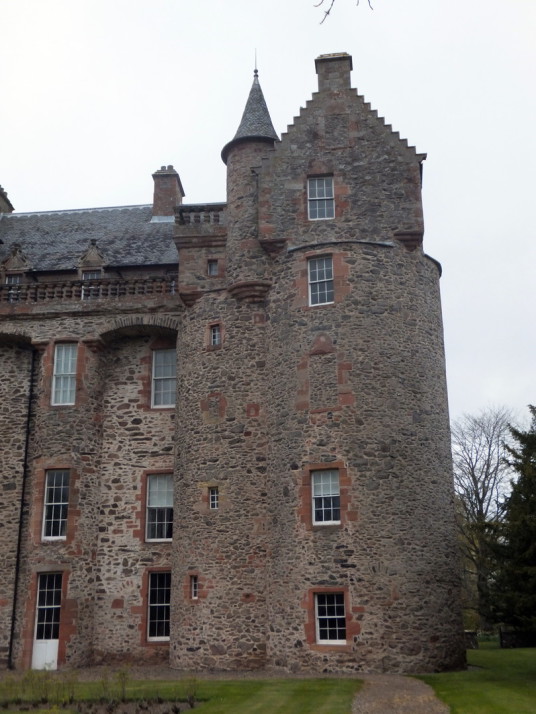 The castle and earldom have parted company when the direct male line failed, and Ian Maitland is the 18th Earl of Lauderdale, while the castle was held by his cousin Gerald Maitland-Carew, who inherited the castle from his grandmother. The castle and contents were transferred to a trust in 1984. The castle has undergone an extensive programme of repair, renovation and redecoration after more than 40 outbreaks of dryrot were found, as well as the discovery that the tall central tower was in danger of collapsing.