Ayrshire: About 4 miles east and south of Maybole, on minor road south of B7045, north of Water of Girvan, 1.5 miles south-east of Kirkmichael, at Cloncaird Castle. 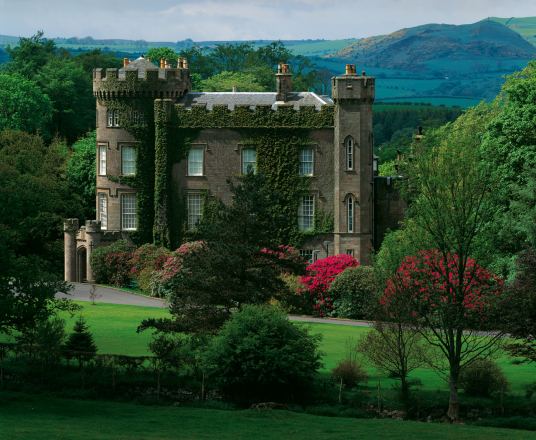 Cloncaird Castle (Many thanks and © Tom Wolf; www.tom-wolf.com

Standing on a slope above the Kelsie Burn in a pretty spot, Cloncaird Castle is a square 16th-century tower house of four storeys and an attic, the third storey projecting on corbelling. The castle was much extended and remodelled in the Gothic style in 1841, and is set in an estate of 140 acres.
The basement is vaulted, but the interior has been greatly altered.
The place is marked as ‘Klonkoird’ on Blaeu’s map of Carrick, depicted as a tower in a wooded and enclosed park. 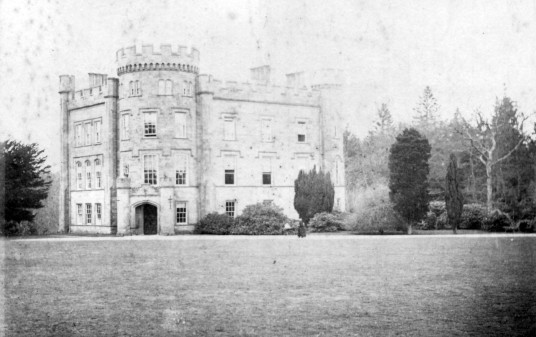 Cloncaird Castle (1885?, Photo many thanks and © Michael Streuli)

This was a property of the Mures from the 15th century. Patrick Mure of Cloncaird was killed at the Battle of Flodden in 1513. Walter Mure of Cloncaird was summoned for treason in 1604 for his part in aiding Thomas Kennedy of Drummurchie during a dispute among branches of the Kennedys.
The property was held by the Kennedys in 1665, but Anthony Mackie of Cloncaird is on record in 1690, and the property passed to other families, including the Wallaces until 1905. The property was sold in 1947 and became a convalescent home, but is now a private residence again and it is occupied.
A ghost of a man is said to have been seen often on the stairs, even in recent times.

Castle of Cloncaird was originally built during the sixteenth century, and is described as having been in the style of feudal mansions of that period, with huge square tower, narrow spiral staircase, and other indications of the time to which it belonged. Towards the close of the sixteenth century it was in the possession of Walter Mure, a scion of the Auchendrane family, and cousin of the unscrupulous Laird of Auchendrane who devised the "Ayrshire Tragedy." This

Walter Mure of Cloncaird was the actual perpetrator of the murder of Sir Thomas Kennedy of Culzean, and was assisted in the execution of his dreadful crime by his boon-companion, Kennedy of Drumurchy.

The castle came into the hands of Henry Ritchie, Esq. of Craigton and Busbie, early in this century, and he made extensive alterations upon it so as to fit it for his chief residence. In 1814 the front was entirely re-built and modernised, and it was thus made one of the finest mansions in the county. Mr Ritchie was descendant of James Richie "merchand burgess" of Glasgow, whose name appears in the Commissary Register in 1674. His family was settled in Craigton, Lanarkshire, in 1746, and his father, James Ritchie, acquired the estate of Busbie, Ayrshire, in 1763. Henry Ritchie was related to the family of the Marquess of Lothian through his mother, Catharine Kerr. He was born in 1777, succeeded to the estates of Busbie and Craigton in 1799, and purchased the Cloncaird property shortly afterwards. As he died without issue in 1843, these estates fell to William Wallace, Esq., his sister's son, and the representative of the Wallaces of Cairnhill. The Castle of Cloncaird is now occupied by the widow of Henry Ritchie, who is a daughter of the late Sir James Fergusson of Kilkerran.

from Historical and Descriptive Accounts of the Castles and Mansions of Ayrshire by A.H Miller (1885)