Tolquhon Castle is a substantial ruinous courtyard castle with a large tower and some fantastic stone carving on the gatehouse, held by the Preston family and then by the Forbeses, in a quiet spot near Tarves (Tarves Tomb) in Aberdeenshire in northeast Scotland. 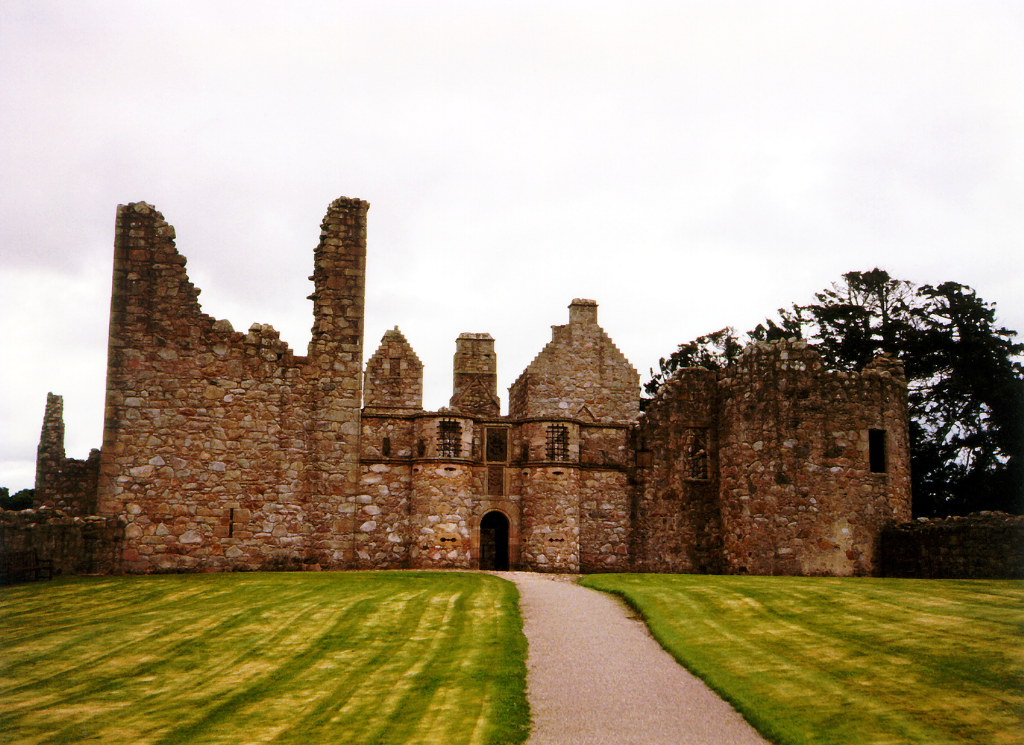 Aberdeen & Gordon: About 4 miles east of Oldmeldrum, on minor road west of B999 1 mile north of junction with A920, south of Newseat of Tolquhon, at Tolquhon Castle. 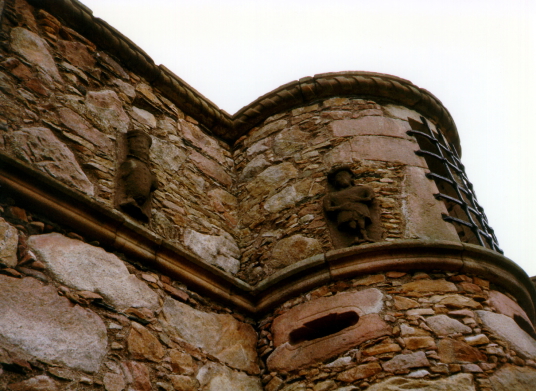 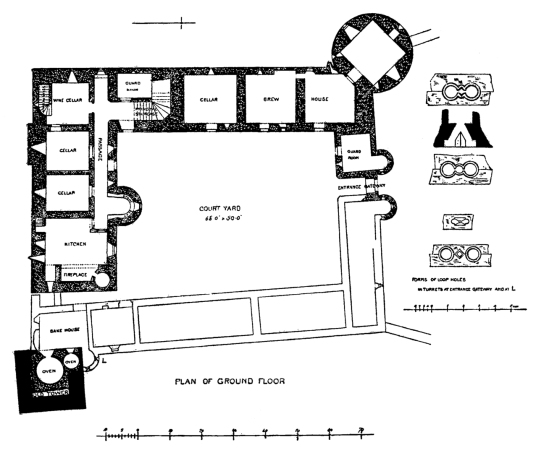 Once a strong but comfortable fortress and now an atmospheric ruin, Tolquhon Castle consists of a strong ruined 15th-century tower in one corner of a courtyard enclosed by ranges of buildings, including a drum-towered gatehouse. A large round tower stands at one corner of the courtyard, with a square tower at the opposite side. The walls are pierced by gunloops.
The rectangular tower had a vaulted basement, but is quite ruinous. 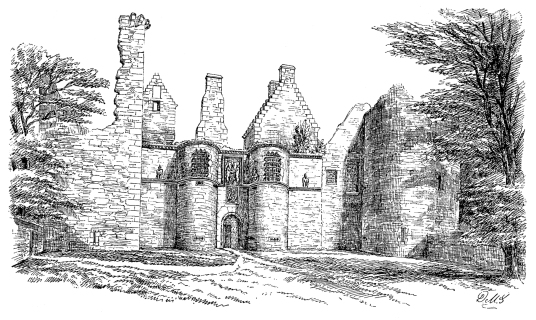 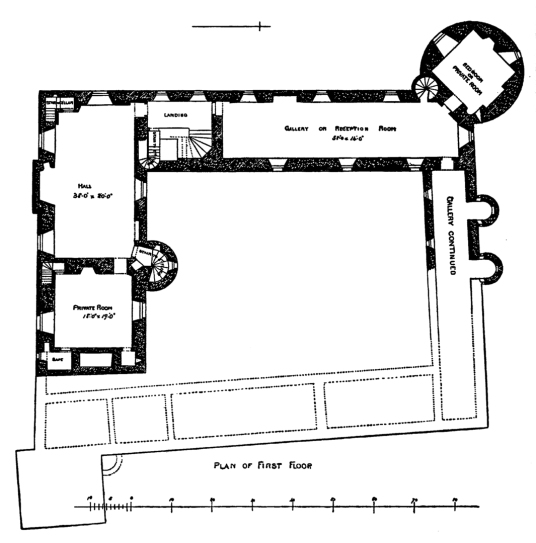 The main three-storey block, opposite the tower, has a projecting semi-circular stair-tower crowned by a square caphouse. This part of the castle was built for Sir William Forbes, 7th laird of Tolquhon, but the master builder William Leiper, whose initials are on the outside of the building.

A carved stone at the entrance has: 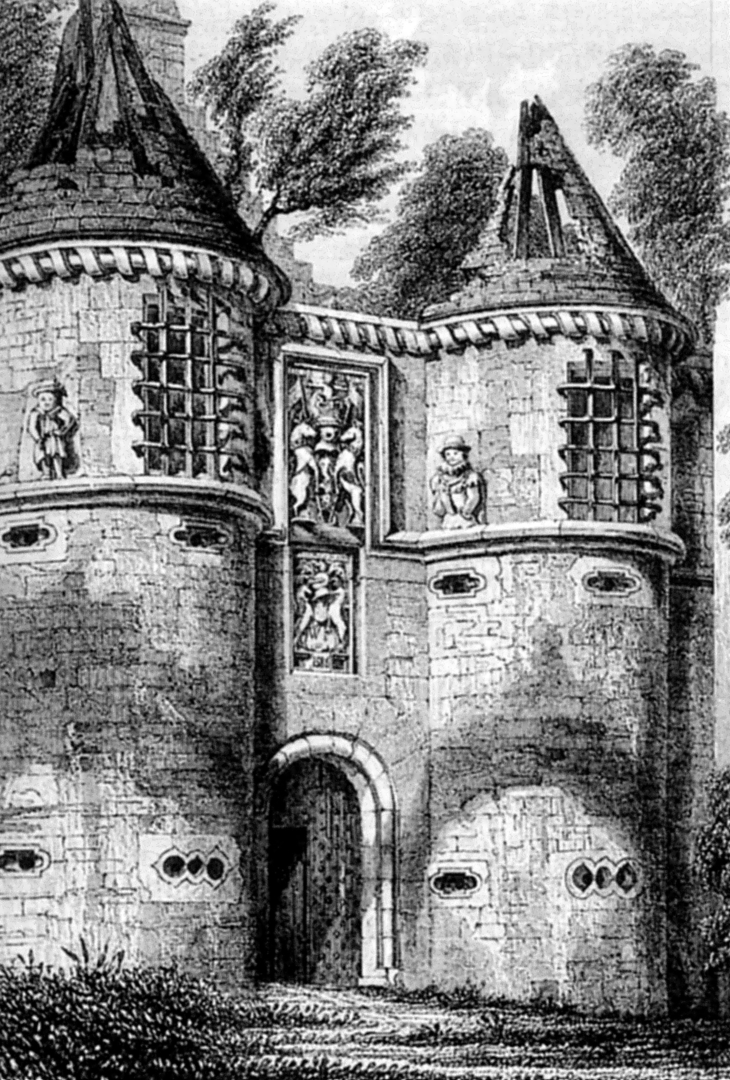 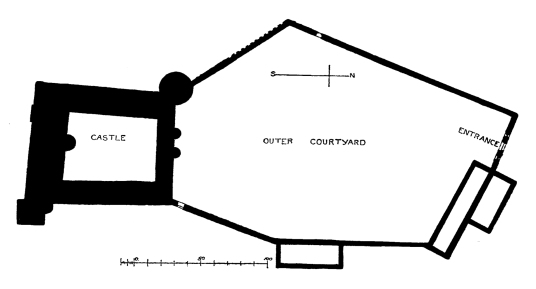 Tolquhon Castle: plan of castle and garden (MacGibbon and Ross)

The entrance leads into a long vaulted passage. It opens into three vaulted cellars, one the wine-cellar, the kitchen, with a wide arched fireplace, and a bakehouse. Both kitchen and wine-cellar have small stairs to the hall above. There is also a pit-prison. 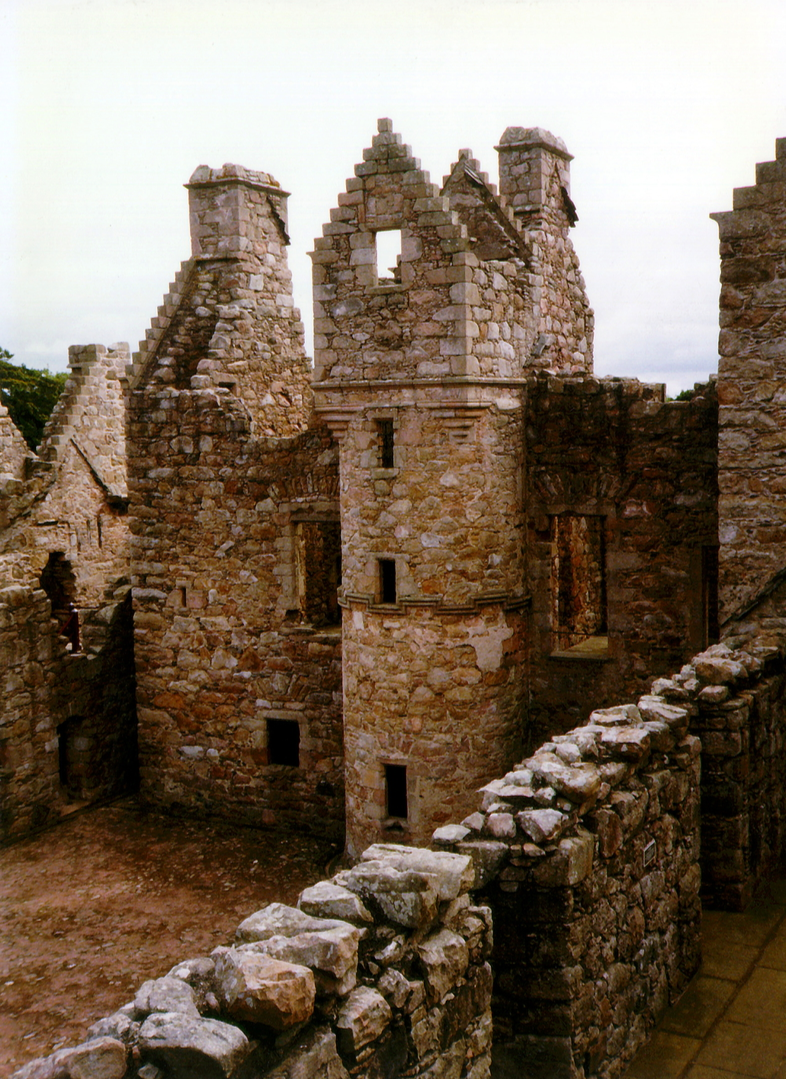 The first floor was reached by a wide curved stair. The hall, at this level, has a large moulded fireplace and is paved by hexagonal flagstones. An adjoining secret chamber was reached by a trapdoor from above. A turnpike stair in the central stair-tower led up to the private chambers on the upper floors. The building had several painted ceilings and beams were decorated with religious texts, which survived into the 19th century but are sadly lost. 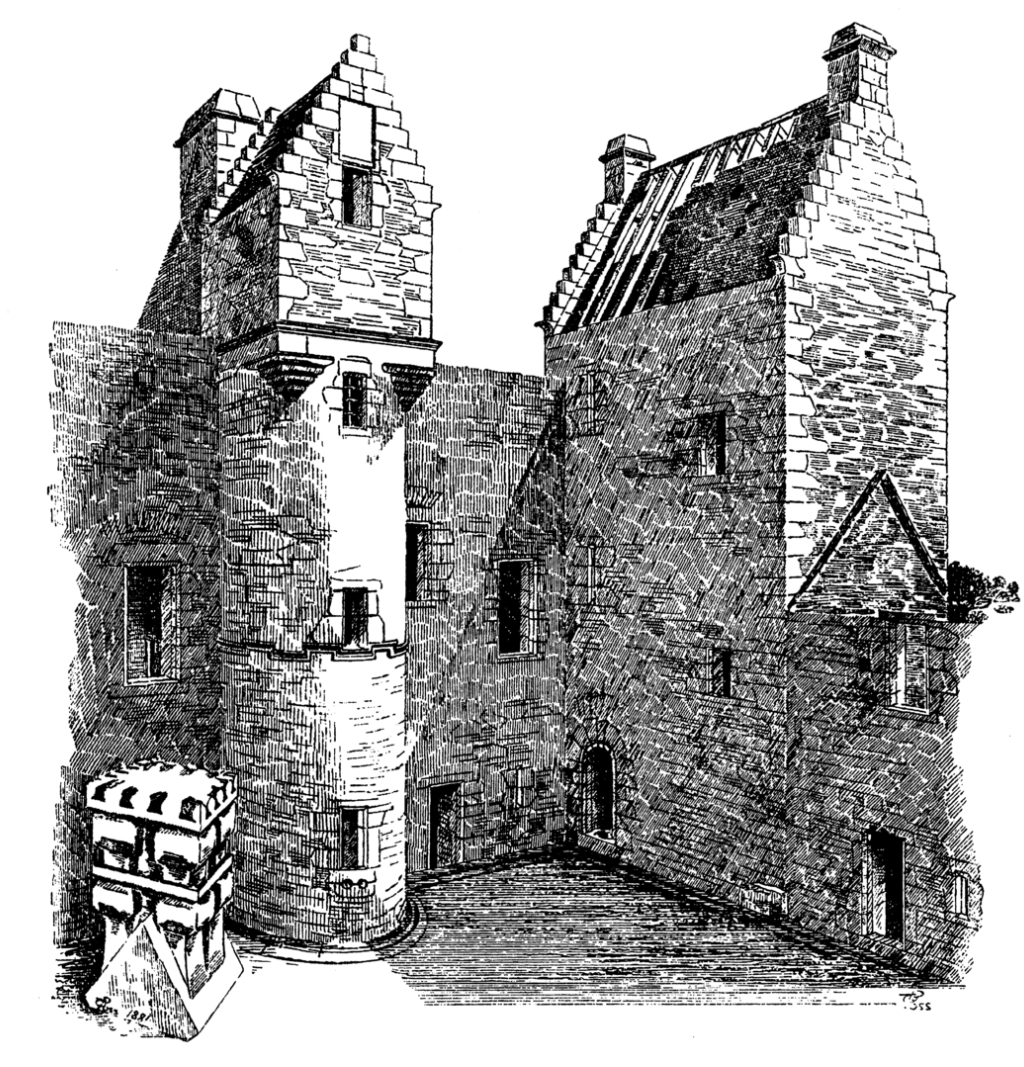 The gatehouse range has two round towers and an arched pend, which was defended by shot-holes. The original iron yetts survive and stone carvings of men are (probably) reset into the gatehouse and there is a fine elaborate heraldic panel above the entrance. 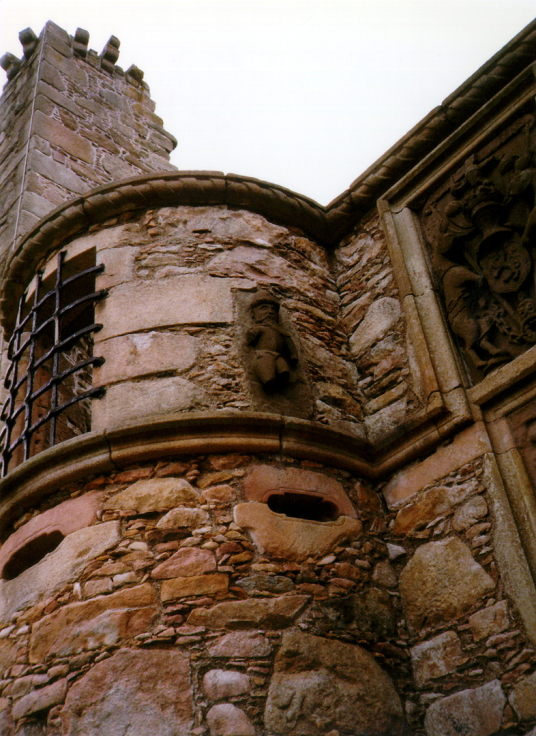 The original tower was built by the Prestons of Craigmillar, but the property passed by marriage through the heiress Marjorie Preston to Sir John Forbes in 1420, who built the rest of the castle. Sir Alexander Forbes, 6th Laird, died at the Battle of Pinkie in 1547, while William, 7th Laird, built the castle as it now is and died in 1596 – his elaborate carved tomb with stone effigies, along with his wife Elizabeth Gordon, survives in Tarves kirkyard [NJ 896312], along with fragments of an aisle added to the church for the use of his family. There are other old carved memorials in the churchyard.

James VI had visited Tolquhon in 1589, during his campaign against the Gordon Earl of Huntly. The 10th laird, Sir Alexander, saved Charles II’s life at the Battle of Worcester in 1651. 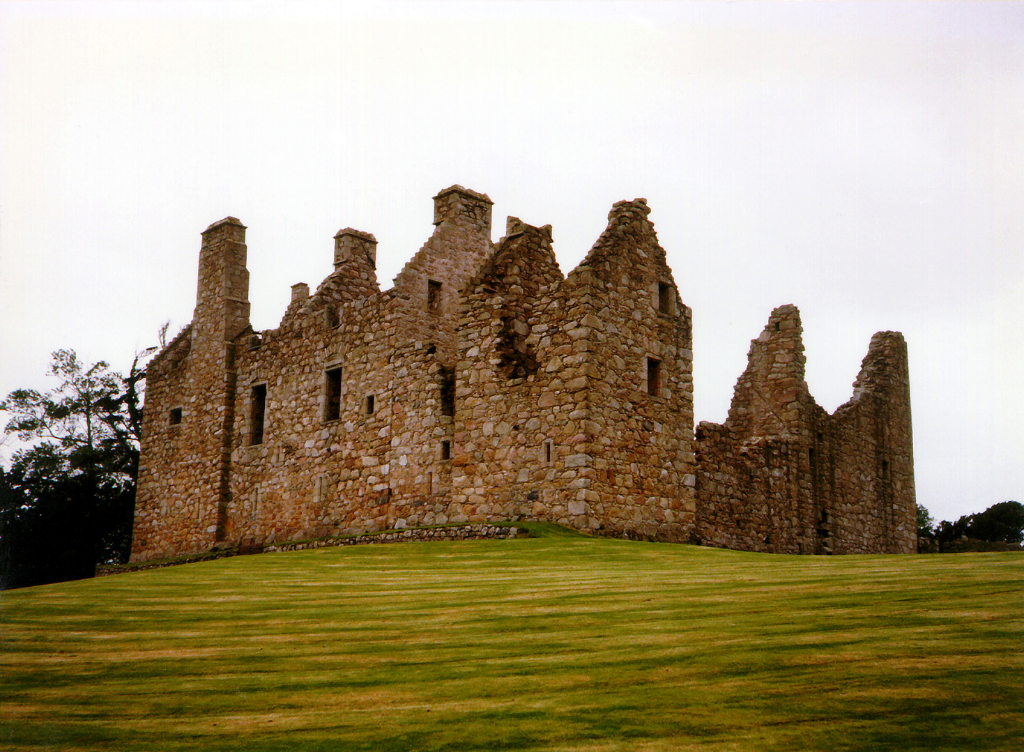 The Forbeses sold the property to the Farquhars in 1716 because of debts from involvement in the Darien Scheme, although William Forbes, 11th laird, had to be forcibly removed from the castle in 1718 by a detachment of soldiers. The property later passed to the Gordon Earl of Aberdeen, and part was used as a farmhouse for a while, but was abandoned around the end of the 19th century and became (more) ruinous. It was put into the care of the State in 1929 and is now managed by HES. 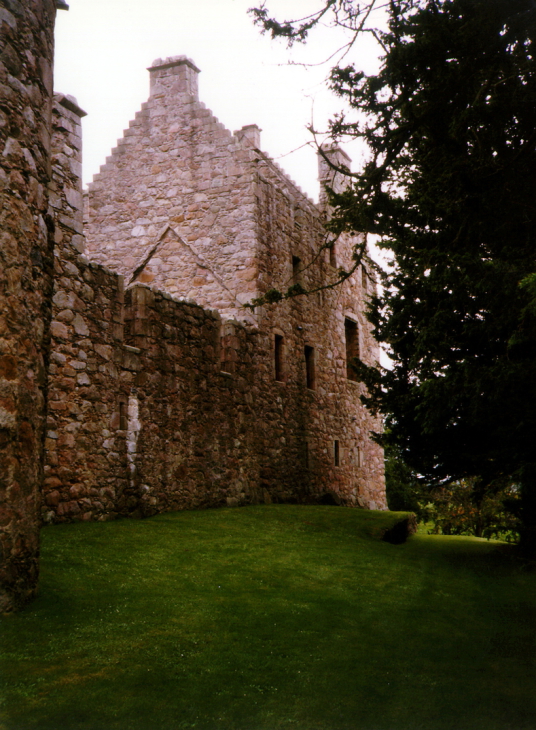 There is said to be a ‘White Lady’, although accounts have also been recorded of a ‘Grey Lady’, who was apparently seen wandering through the ruins at midnight, along with the sound of groaning.