MacLellan's Castle, an impressive, large and once comfortable but now ruinous tower house of the MacLellan family, located in the historic burgh of Kirkcudbright in Dumfries and Galloway. 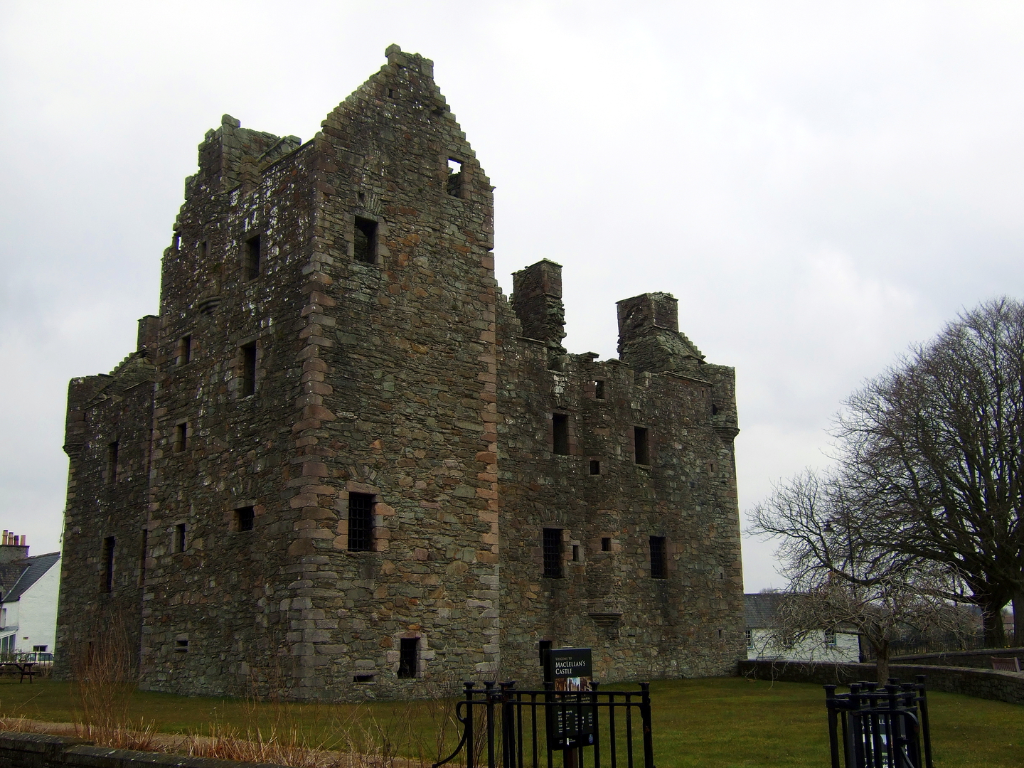 Galloway: In Kirkcudbright, just south-west of the junction of A755 with A711, just south of the River Dee, in the centre of the town, at MacLellan's Castle. 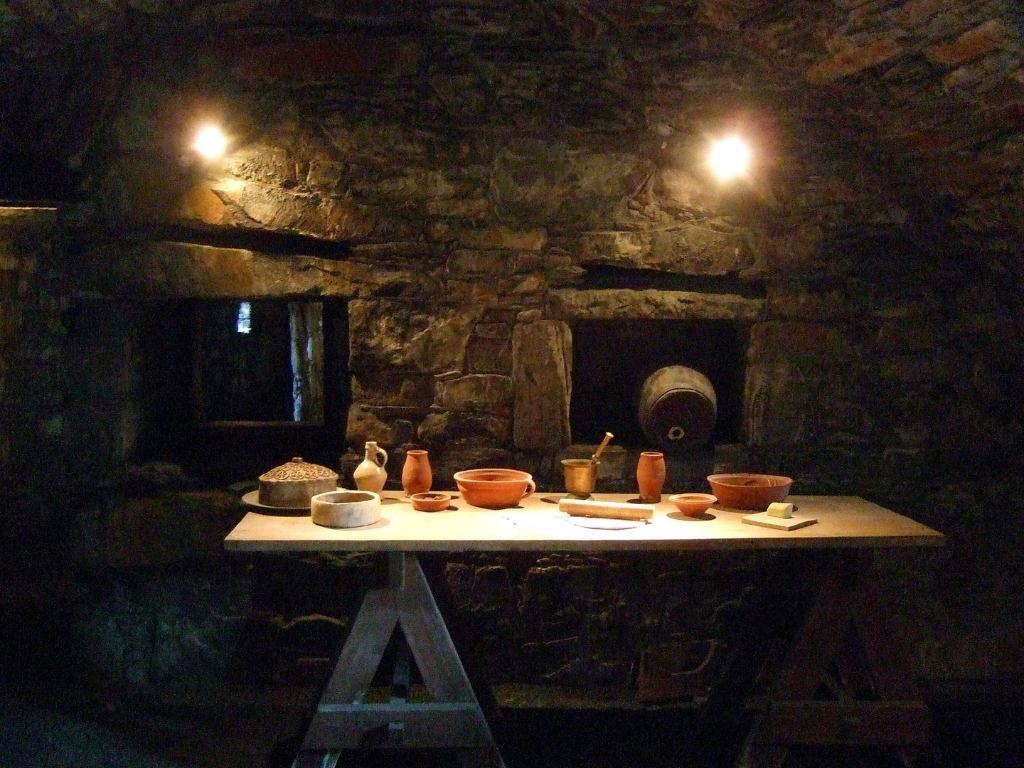 In the pleasant burgh of Kirkcudbright by the River Dee, MacLellan’s Castle is a large 16th-century L-plan tower house with a further extension. It consists of a main block and a wing, a projecting rectangular tower, and two towers in the re-entrant angle. 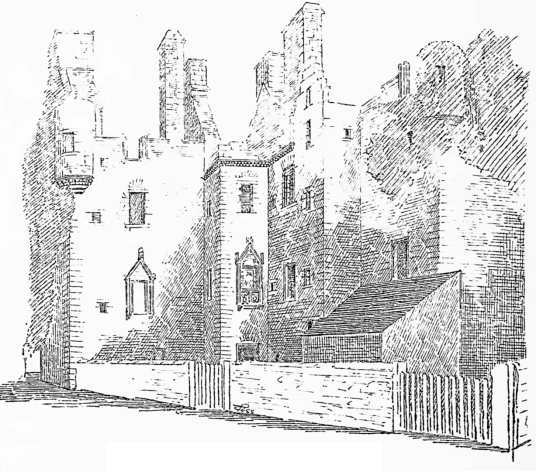 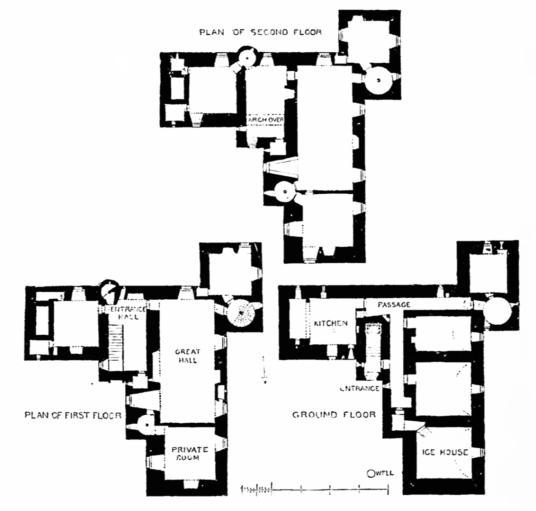 The entrance, at the foot of the smaller of two towers in the re-entrant angle, opens onto a wide straight stair to the hall and to a passage to three vaulted basement cellars. Another passage leads to the vaulted kitchen, which has its own door to the courtyard. 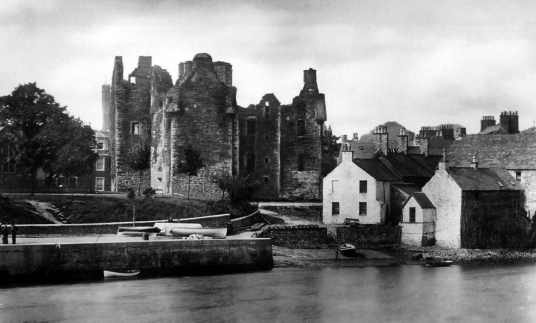 The hall has a fine fireplace, and a small turnpike stair leads to three private chambers. There is a laird’s lug, a chamber from where the hall could be observed in secret. Another turnpike stair, in a turret, climbs to the floors above from the main stair, and there was also a further turnpike stair. 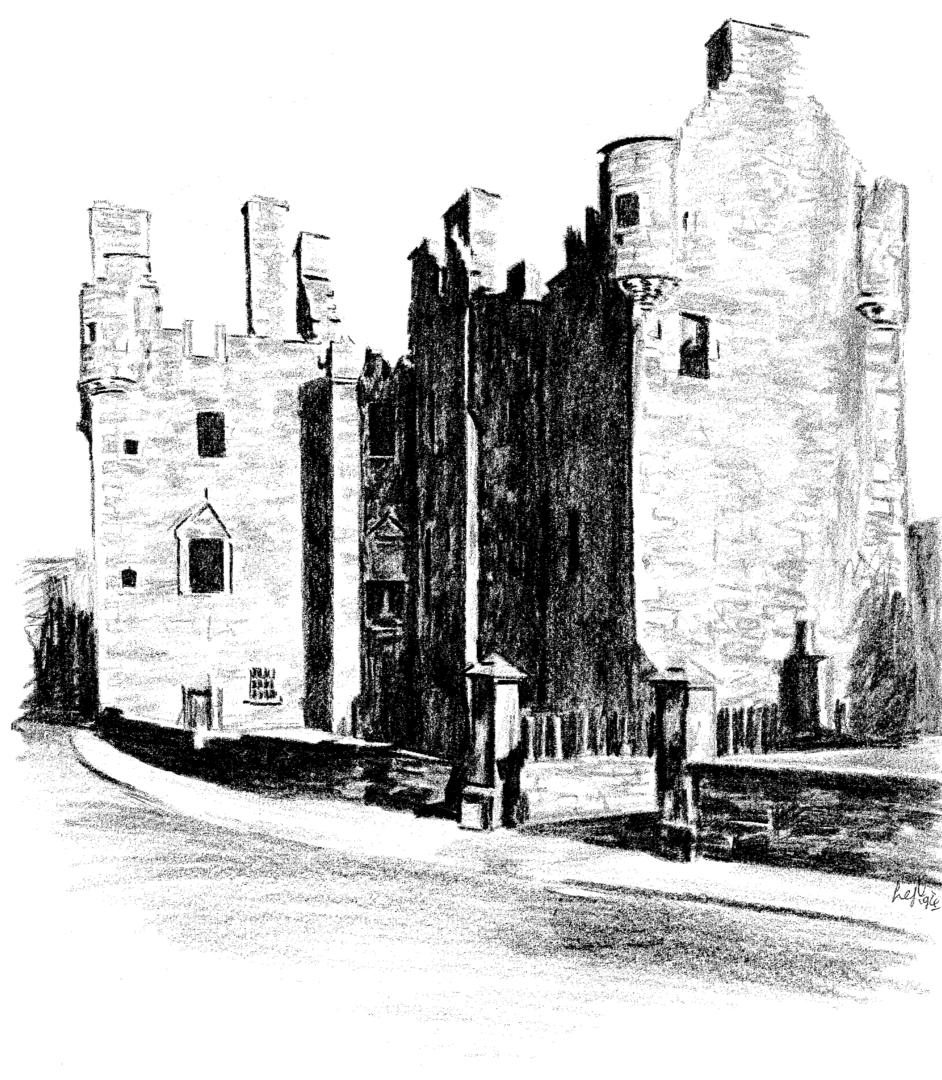 In 1569 Sir Thomas MacLellan of Bombie, Provost of Kirkcudbright and a Gentleman of the Bedchamber to James VI, acquired the site of the royal castle of Kirkcudbright and the Franciscan Greyfriars Monastery, demolishing all but part of the chancel, now incorporated into the Episcopalian Church (Greyfriars), and he built the castle nearby around 1582.

James VI visited in 1587 and gave Sir Thomas a silver gun, which is now in the Stewartry Museum in Kirkcudbright. 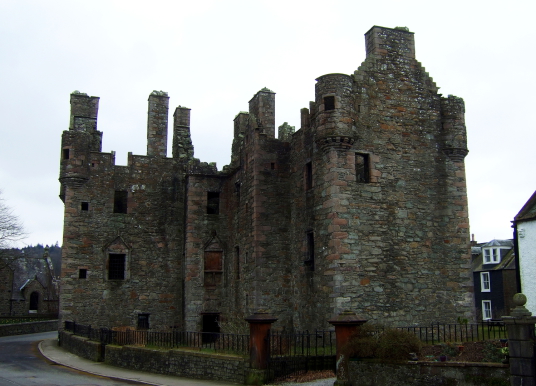 Sir Robert MacLellan of Bombie, also a Gentleman of the Bedchamber to James VI, was made Lord Kirkcudbright in 1633. He was an unruly fellow and was twice imprisoned, once after a fight in Kirkcudbright high street, then for shooting someone. One of the family fought at the Battle of Philiphaugh in 1645, although the family then got into financial trouble. 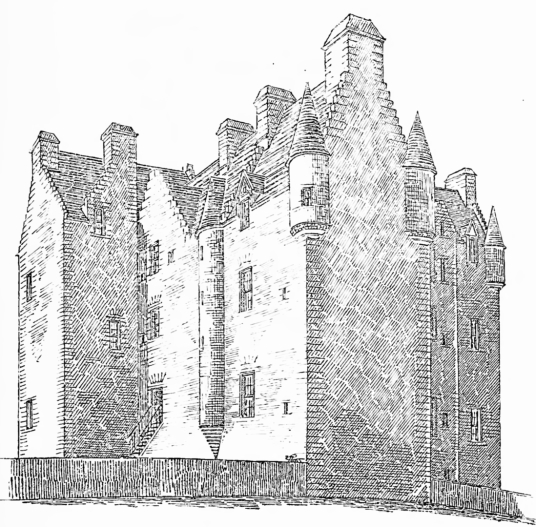 Lord Basil Hamilton of Baldoon had a ratification for the property in 1705, when the castle, tower, fortalice and manor place of Kirkcudbright is mentioned. The castle was abandoned around 1752, and it was sold to Sir Robert Maxwell of Orchardton, only to be sold again to the Douglas Earl of Selkirk in 1782. 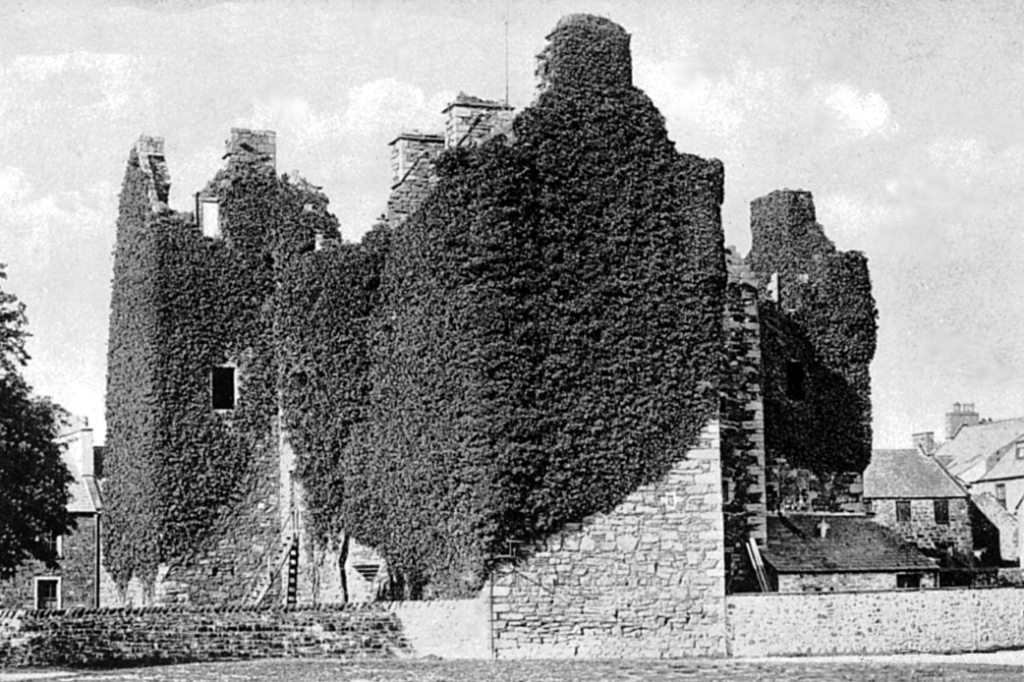 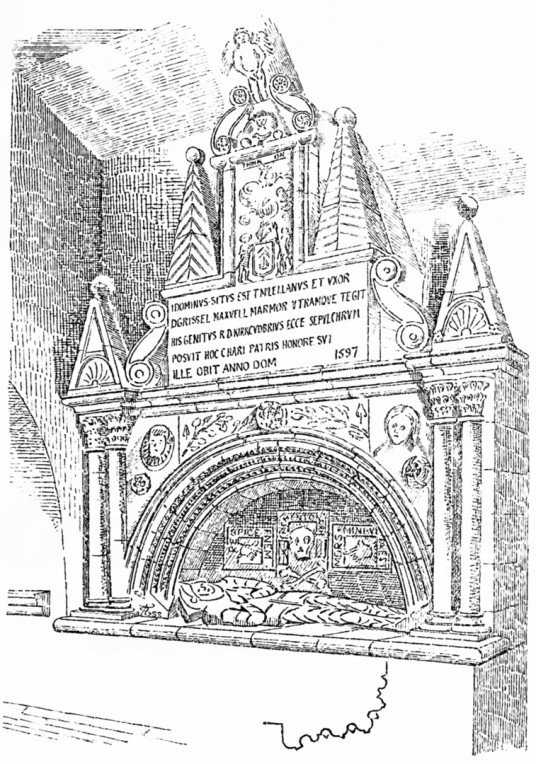 Most of the Greyfriars monastery was demolished, as mentioned above, but part of the church [NX 683511] survives, and houses the MacLellan monument, a splendid carved tomb for Sir Thomas MacLellan and Grissel Maxwell, his wife, dated 1597. Grissel was only 16 when she was married to MacLellan, and their son Robert succeeded. He was a Royalist and managed to lose most of the family possessions by 1639. 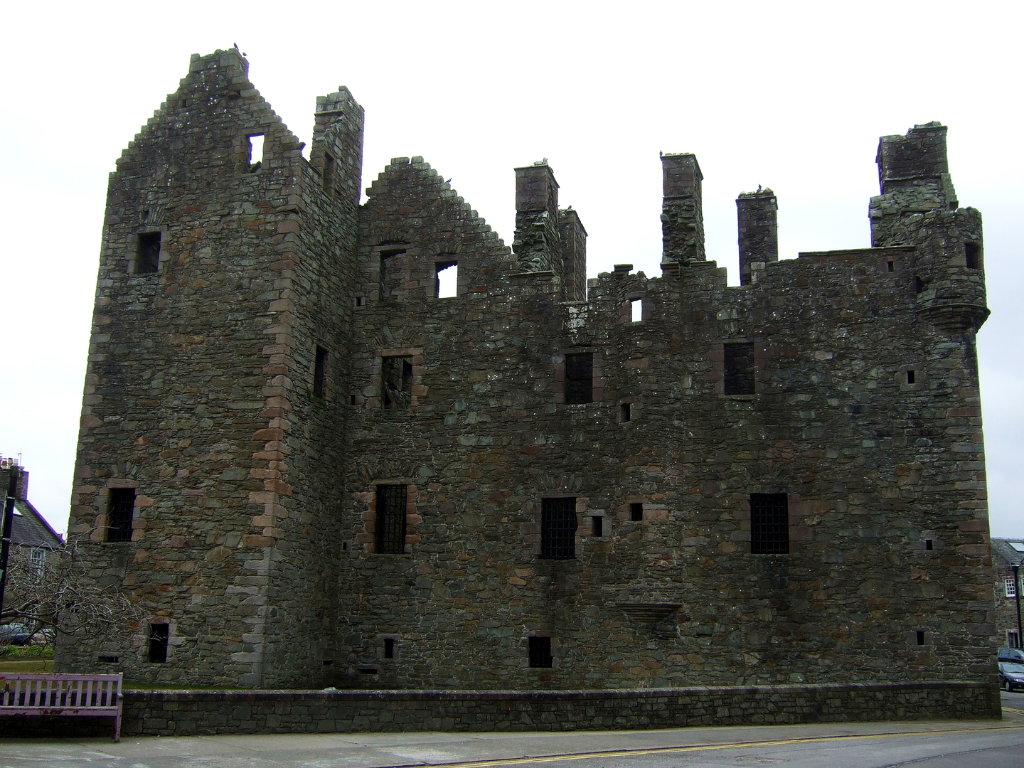 The castle was put into State guardianship in 1912 and is now in the care of HES.

Other places of interest in Kirkcdbright are the site of Kirkcudbright Castle, Greyfriars Church (which houses the MacLellan monument), the tolbooth (now an arts centre), the Stewartry Museum and Broughton House.