Ayrshire: About 1 mile south-east of Galston, on minor road east of B7037, in a ravine of Burn Anne, 0.75 miles south of River Irvine, at Cessnock Castle. 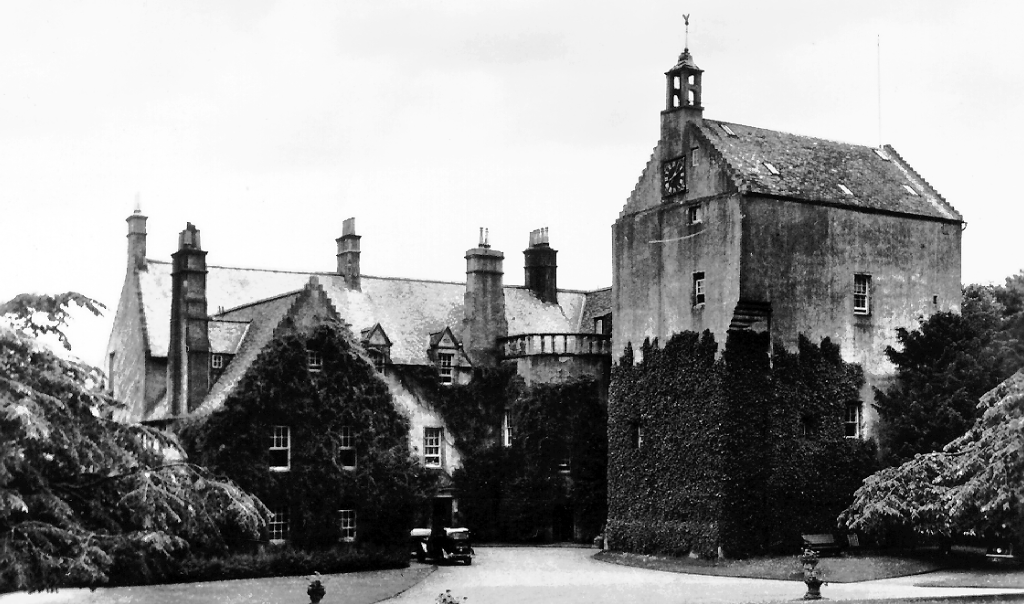 Standing above a ravine, Cessnock Castle is a massive 15th-century rectangular tower of three storeys and an attic. the upperwaorks of which were altered in the 16th or 17th century. The walls are as much as 18 foot thick. To this has been added a large mansion from the 16th century, making the building U-plan. A semi-octagonal tower of three storeys crowned by a balustrade stands in one corner of the courtyard and houses the main entrance. The old tower has a corbiestepped gabled roof.

The parapet has been removed, although the open rounds survive (the small bell tower on the gable, shown in the photograph, has been removed). Part of the building has been harled and whitewashed. 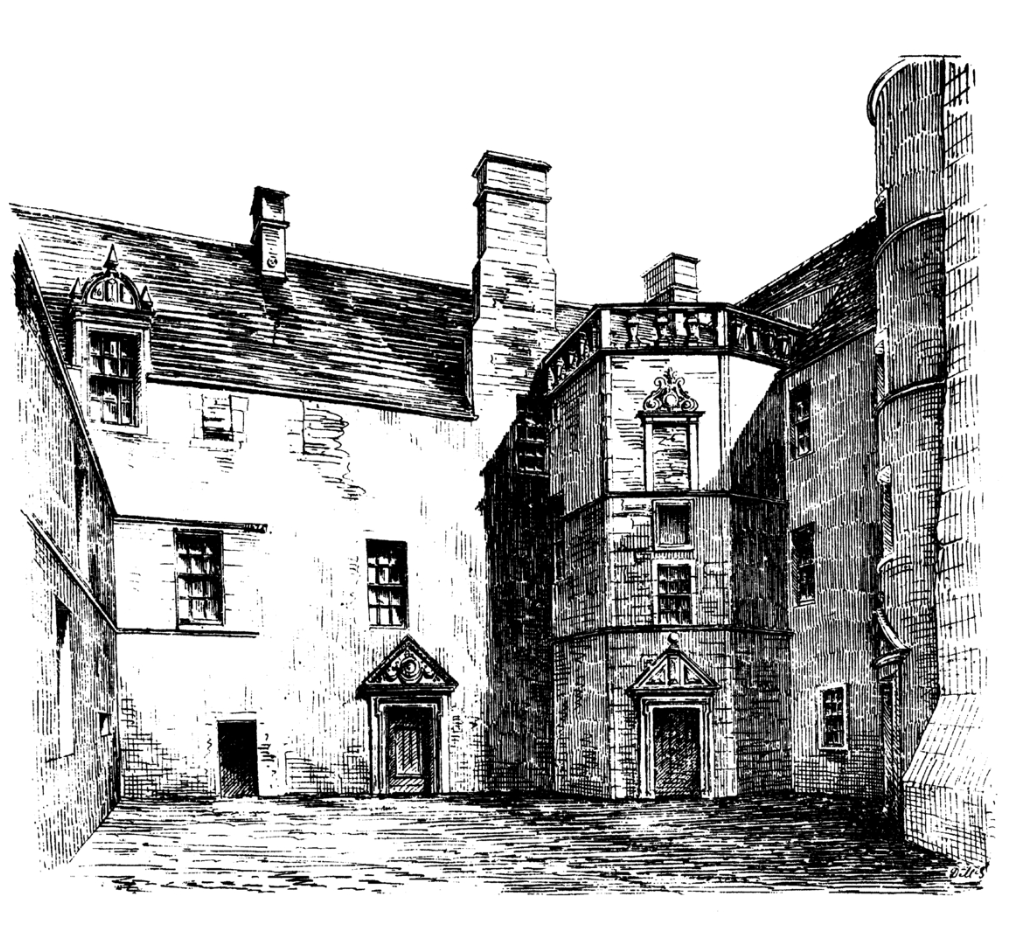 The basement is vaulted, the hall would have been on the first floor, with private chambers on the floors above. The great hall, in the newer part, still has a late 16th-century painted ceiling and beams, and some rooms have 17th-century panelling.
‘Sesnock’ is marked on Blaeu’s map of Kyle and is shown as a tower. 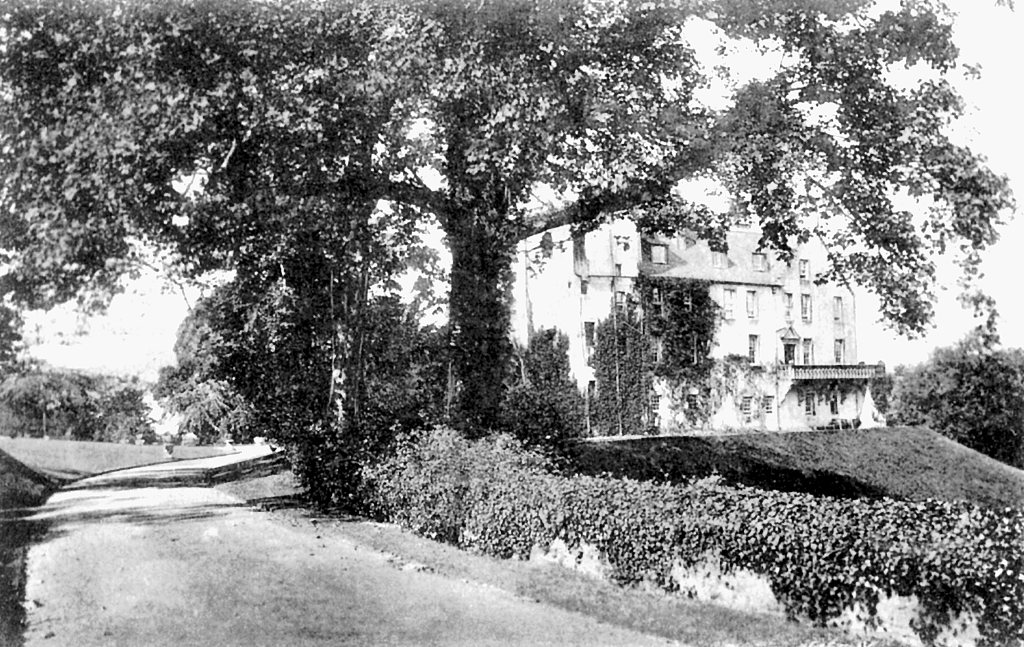 Cessnock was a property of the Campbells, and George Campbell of Cessnock is on record in 1479. Mary, Queen of Scots, came to Cessnock after her defeat at Langside, when one of her ladies died here, and is said to haunt the castle. The reformers George Wishart and John Knox also visited.

Hugh Campbell of Cessnock, son of George Campbell, married Elizabeth Campbell, co-heiress to the Campbells of Loudoun. He was appointed Lord Justice Clerk and a Lord of Session in 1649 but declined to take up either post. He was a member of parliament and was knighted in 1649. The family were forfeited for supporting the Covenanters and imprisoned in 1685 and he died the following year. His son Geroge, who had also been imprisoned, recovered the estate, and was made Lord Justice Clerk and a Lord of Session. He was also knighted.

Margaret, his daughter and heriess, married Sir Alexander Home (or Hume), son of the Earl of Marchmont, and another distinguished lawyer. Sir Alexander added the name Campbell to his own, and was made raised to the Bench as Lord Cessnock in 1704. He supported the government in the 1715 Jacobite Rising, although the property was sold around 1720, and he eventually became 2nd Earl of Marchmont in 1740 (their seat was Marchmont House, near Greenlaw in the Borders, and the family also owned Mertoun House until 1912). A ratification of 1702 in favour of Dame Margaret Campbell mentions the tower. The title became extenict in 1794 when the line ended in daughters.

The property then passed through the families of Dick in the 1720s, the Wallaces of Cairnhall, and the Scotts of Balcomie in 1786, then by marriage to the Dukes of Portland in 1795, then to the De Fresnes in 1946, who held it until the 1995. Robert Burns visited the castle, and the building was restored in 1890 and again in recent years. In 1995 the castle with 20 acres of grounds was on sale for £95,000, according to The Independent.

The spirit of John Knox is also said to haunt the castle, being heard quoting scripture, although how that sits with the ghost of Mary Queen of Scots’s lady, mentioned above, is hard to know.
The castle is said to be linked to Loudoun Castle by an underground passage.