Falkirk: About 1 mile south and west (outskirts) of Bo’ness, on minor road south of A993, south of the Bo’ness and Kinneil Railway, at Kinneil House.

OPEN: Access at all reasonable times – usually view from exterior but wing of house with wall paintings open some days during the year.
Web: www.kinneil.wordpress.com / www.historicenvironment.scot 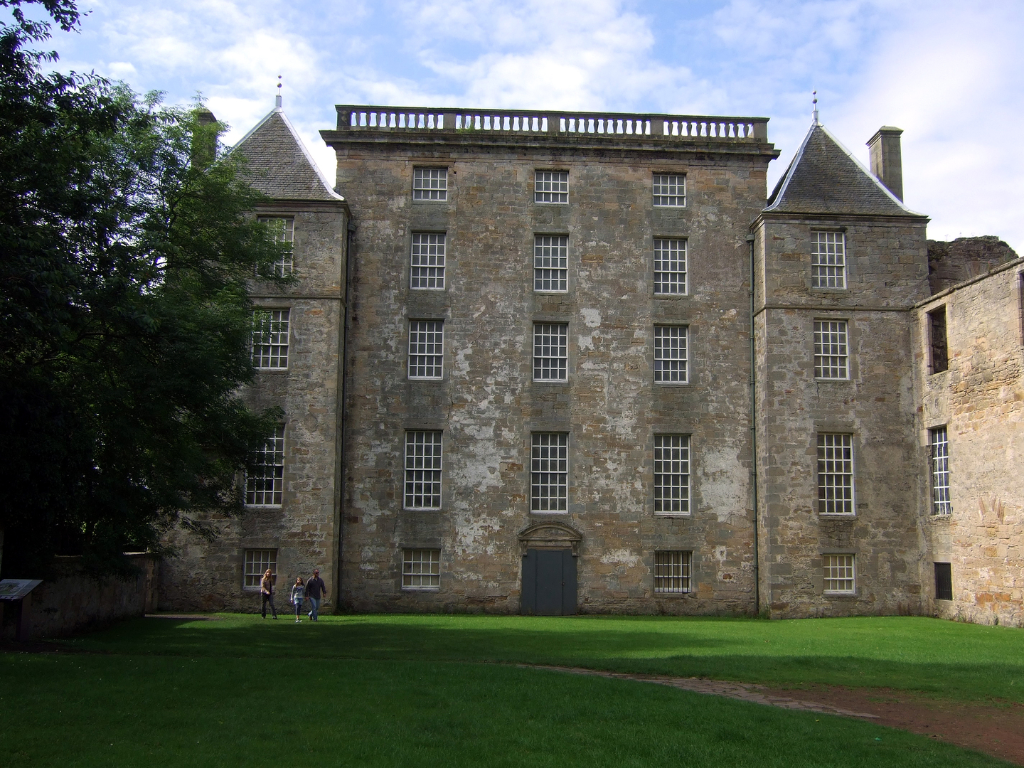 Standing in what is now a public park and above the Gil Burn, Kinneil House or Palace consists of a much-altered 15th-century tower house of five storeys, to which was added a three-storey wing of 1553, originally a separate range. 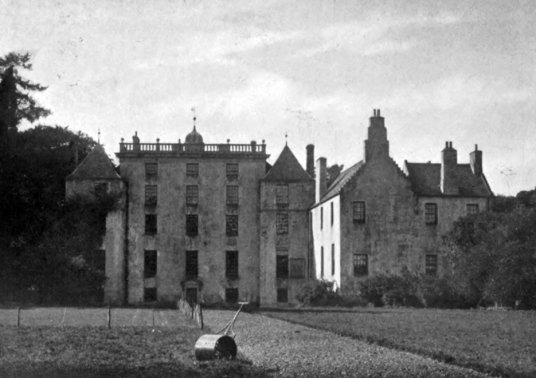 The house was further extended and altered in 1600, and in 1677 when a tower with a pyramidical roof linking the two parts of the house was built, as well as another tower to match this on the other side of the old tower house. The tower house was much altered at this time with the insertion of new large windows, but still has gunloops at the back of the building. There was a large courtyard, with two flanking ranges, and the remains of a walled garden survive. An arched tunnel was found, leading from the west side of the house towards the Gil Burn. 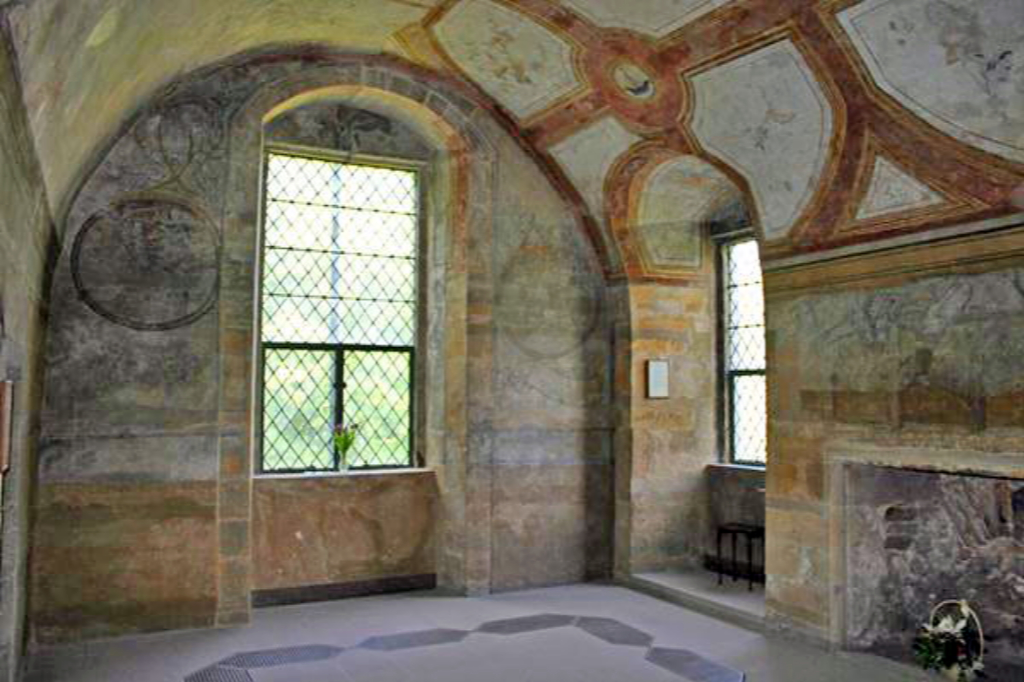 The basement of the old part is vaulted, but the house has been much altered inside and the tower block was gutted in 1936. There are fabulous tempera paintings in two rooms in the wing, some of the best preserved and executed in Scotland, from the mid 16th century. The Parable Room has tempera wall painting illustrating scenes from the parable of the Good Samaritan as well as heraldic displays. The vaulted Arbour Room has further fine decoration. These rooms were formerly panelled, which is why the wall paintings survived.
‘Kinneil’ is prominently marked on Blaeu’s map of Stirlingshire. 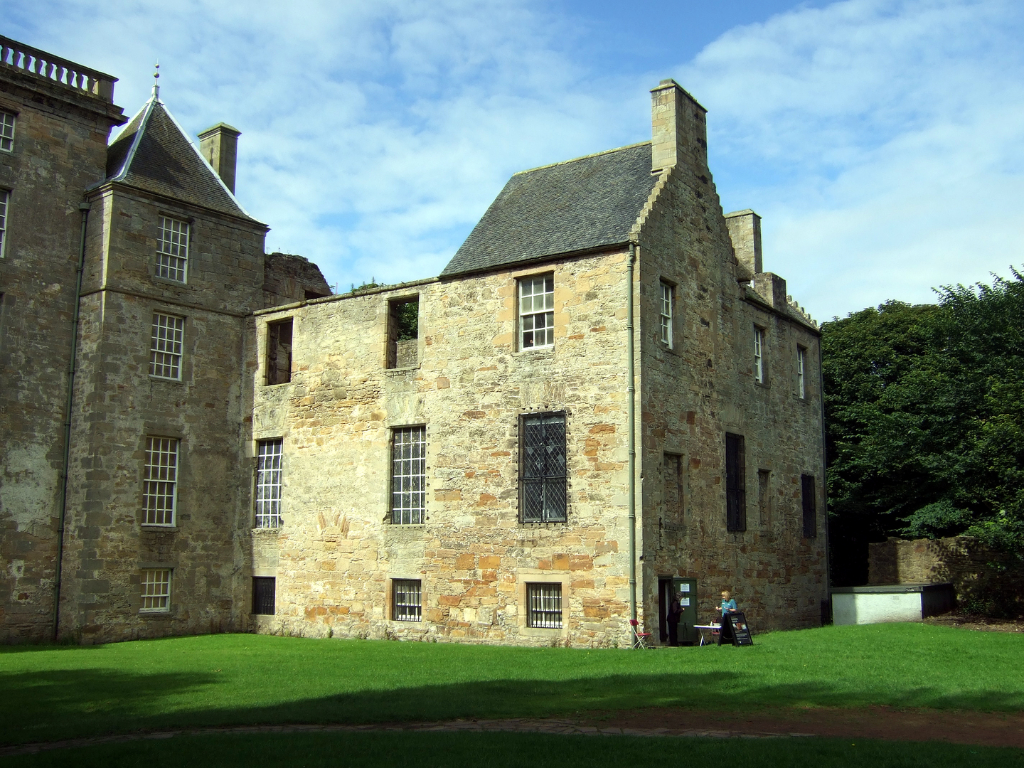 The lands were held by the Hamiltons from the 14th century, having been given to them by Robert the Bruce following the Battle of Bannockburn. The Hamilton Earl of Arran was Governor for Mary, Queen of Scots, until 1554, and then led her party until 1573 – he built a large tower here in 1553. As a result, the house was sacked by the Earl of Morton in 1568-70, and part blown up with gunpowder, but it was later rebuilt, and in the 17th century was greatly remodelled by the Dukes of Hamilton (also see Brodick). The building was occupied by Cromwell’s forces in the 1650s after the James Hamilton, first Duke, was executed in 1649 by Cromwell, and Wiilliam, 2nd Duke of Hamilton, died at the Battle of Worcester in 1651. The property went to his sister Anne, who married William Douglas, Earl of Selkirk. 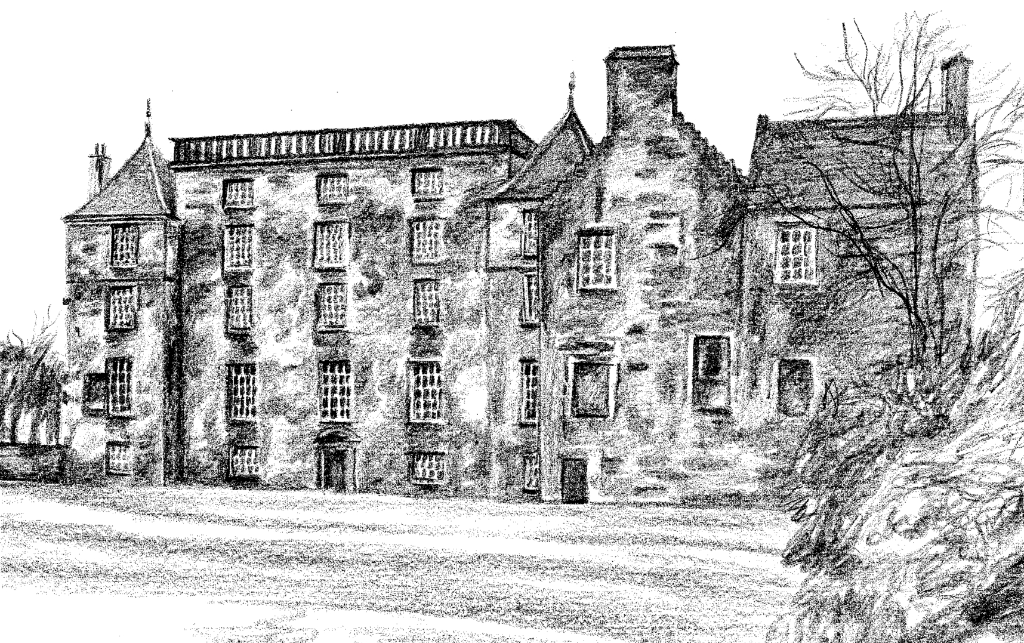 Kinneil was abandoned about 1828, and became derelict, and in 1936 was to be demolished. During preparation for demolition the wall paintings were discovered and the building was consolidated after being partly stripped, unroofed and dismantled. 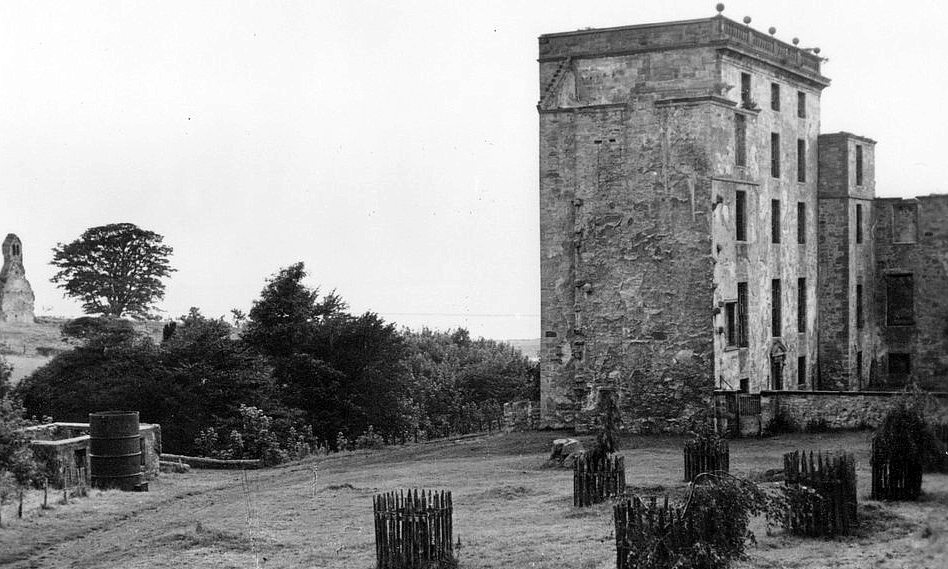 There was a village near the house, on the other side of the Gill Burn, but nothing survives except the gable and some walls of the church [NT 981806], which was dedicated to St Catherine. There are some interesting old burial markers.
A museum occupies the renovated stable block near to the house, and James Watt had a workshop, also near the house, where he carried out experiments on the development of the steam engine. In the park is also a stretch of the Antonine Wall and the footings of a Roman fortlet.

The area is said to be haunted by the ghost of Ailie or Alice, Lady Lilburne, the young wife of a Cromwellian officer billeted here in the 1650s or the mistress of the Duke of Hamilton. After having tried to escape several times because she was homesick, she was imprisoned in one of the upper chambers. However, she threw herself from the window into the Gil Burn, 200 feet below. Her screams and wails are said still to be heard on dark winter nights, and her spectre is said to haunt the glen.