Argyll & Dunbartonshire: About 1.5 miles north and west of Balloch, on minor roads east of A82, on west side of Loch Lomond, at Cameron House. 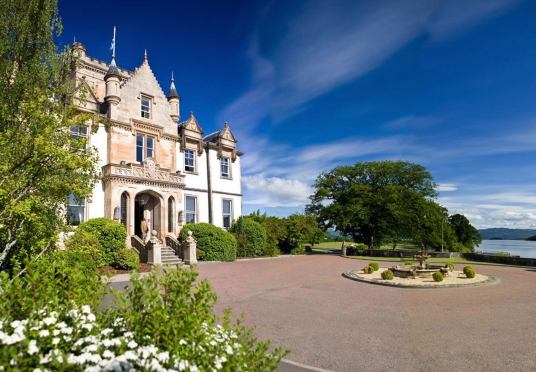 Site of castle. Set in a picturesque position on the banks of Loch Lomond, Cameron House is a castellated mansion, rising to four storeys, with extensive later additions. The present building dates mostly from 1830 and, following a fire, was remodelled in 1865 by the architect William Spence. It may incorporate a 14th-century castle, itself remodelled into a fine house in the 17th century, and extensive alterations were also made to this building in 1806.
‘Camron’ is marked on Blaeu’s map of The Lennox. 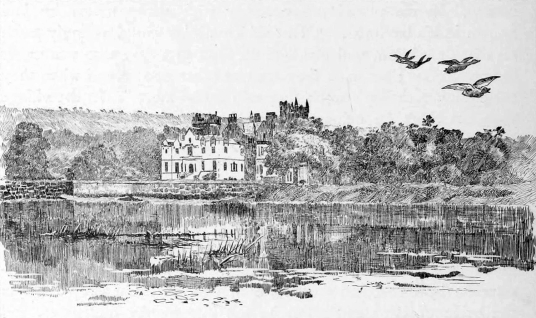 The property was held by the Earls of Lennox, before passing to the Dennistouns of Colgrain, who apparently had a house here in about 1480. Cameron went to the Colquhouns in 1612, and was then held by the Smiths and then by the Shaws, before going to the Govans in 1696, the MacLachlans in 1749, then to the Charteris of Amisfield family in 1756, who sold it to the Smolletts in 1763. They moved here from Bonhill, since their old home was falling into disrepair. Tobias Smollett the novelist was entertained in the house in 1766 by his cousin James Smollett. Boswell and Dr Johnson stayed overnight in 1772 after visiting Rossdhu.
The property went by marriage to the Telfers, who changed their name to Telfer-Smollett. The grounds were opened as a Bear Park in 1972. The family sold the property in 1986, when it became a hotel and leisure centre. The building was seriously damaged by fire in December 2017, during which two guests died.

One of the rooms is said to be haunted. Another story was that the freezing over of Loch Lomond was said to herald a death in the resident family, but – however – over the years this was shown not to be the case.