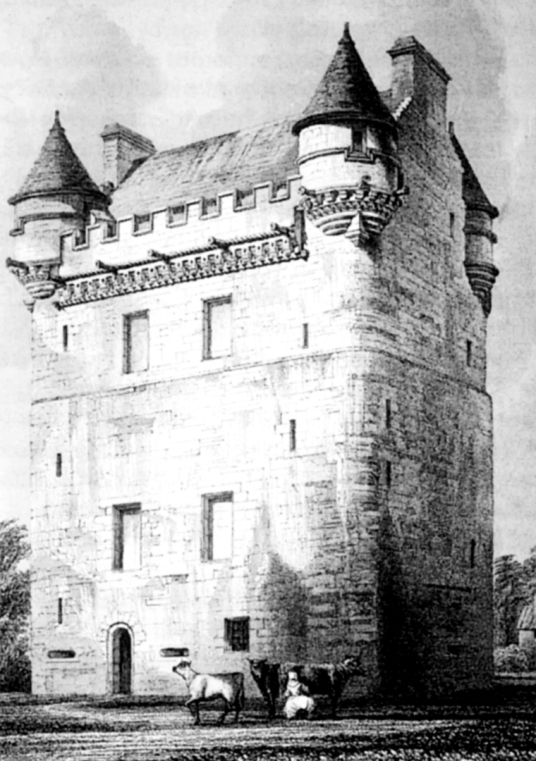 Once a strong fortress and still an attractive edifice which can be seen for miles around, Udny Castle consists of a large altered 15th-century tower, which may incorporate older work, to which a huge baronial 19th-century mansion had been added – although this was demolished in the 1960s. The tower was heightened, and corbelled-out bartizans with pointy finials were added in the 17th century, along with a parapet on one side. The walls are as much as 8 foot thick, harled, rounded at corners, and pierced by gunloops and shot-holes. 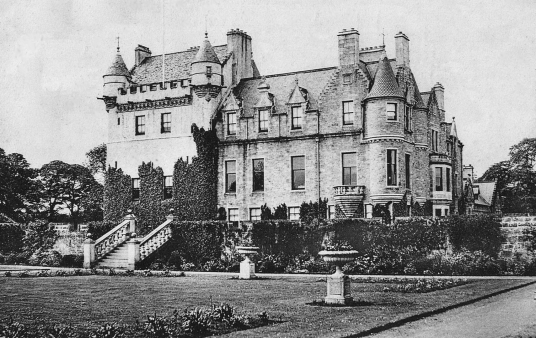 Udny Castle: the adjoining mansion has been demolished (old postcard)

The arched entrance leads to the vaulted basement, which contains the kitchen and wine-cellar. A wide turnpike stair climbs to the vaulted hall on the first floor. The windows of the hall have stone seats. A turnpike stair, in one corner of the hall, leads up to the private chambers on the floors above.
The property was held by the Udnys from the 14th century or earlier, and the family supported Mary Queen of Scots and were then Royalists in the 17th century. In 1634 the family moved to Knockhall Castle, which was burnt down in 1734. Alexander Udny of that Ilk had a ratification of 1672 in his favour, which mentions the lands and mains of Udny, with the tower, fortalice, manor place etc. Udny was abandoned about 1775, but was later restored and extended by a large baronial wing of three storeys. The wing was demolished in the 1960s, but the tower is in good condition, and apparently still occupied by descendants of the Udny family.
The Udnys built a burial vault [NK 002256] at Newburgh, which dates from the 18th century. There are some old markers in the graveyard.