Kildrummy Castle is a ruinous but impressive early stone stronghold of the Earls of Mar, in a pretty spot with gardens nearby, near the village of Strathdon in Aberdeenshire in the northeast of Scotland. 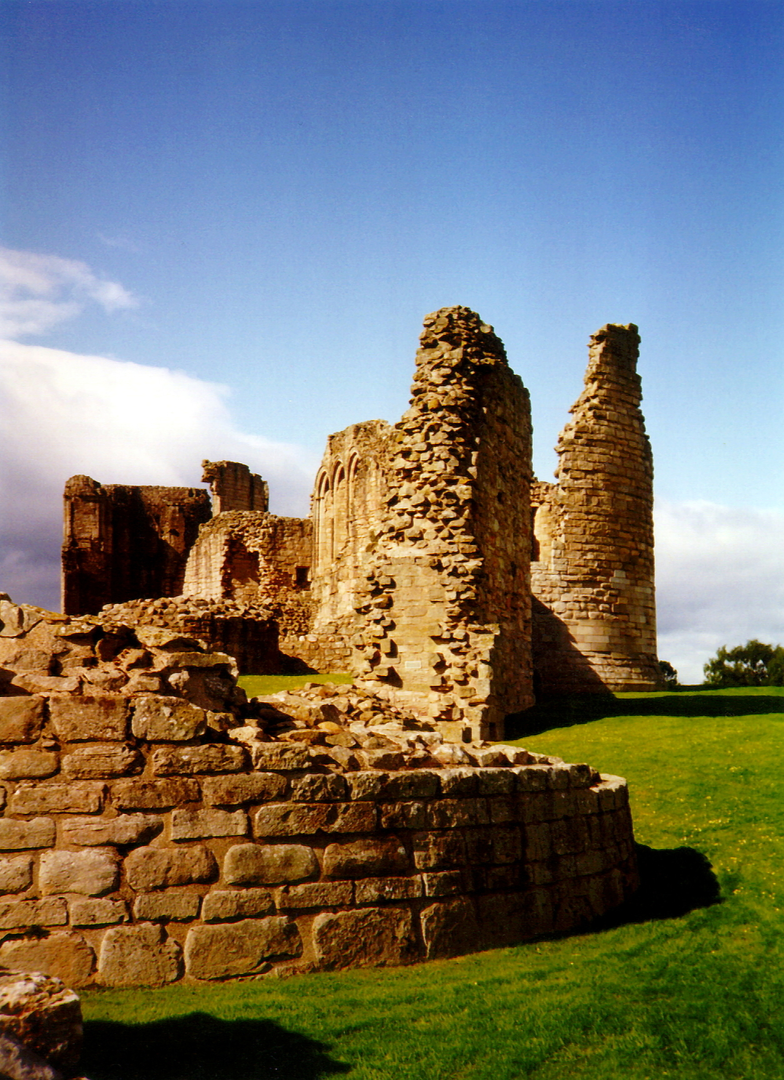 Aberdeen & Gordon: About 7 miles east and north of Strathdon, 1 mile south-west of hamlet of Kildrummy, on minor roads west of A97, just south of Mains of Kildrummy, at Kildrummy Castle. 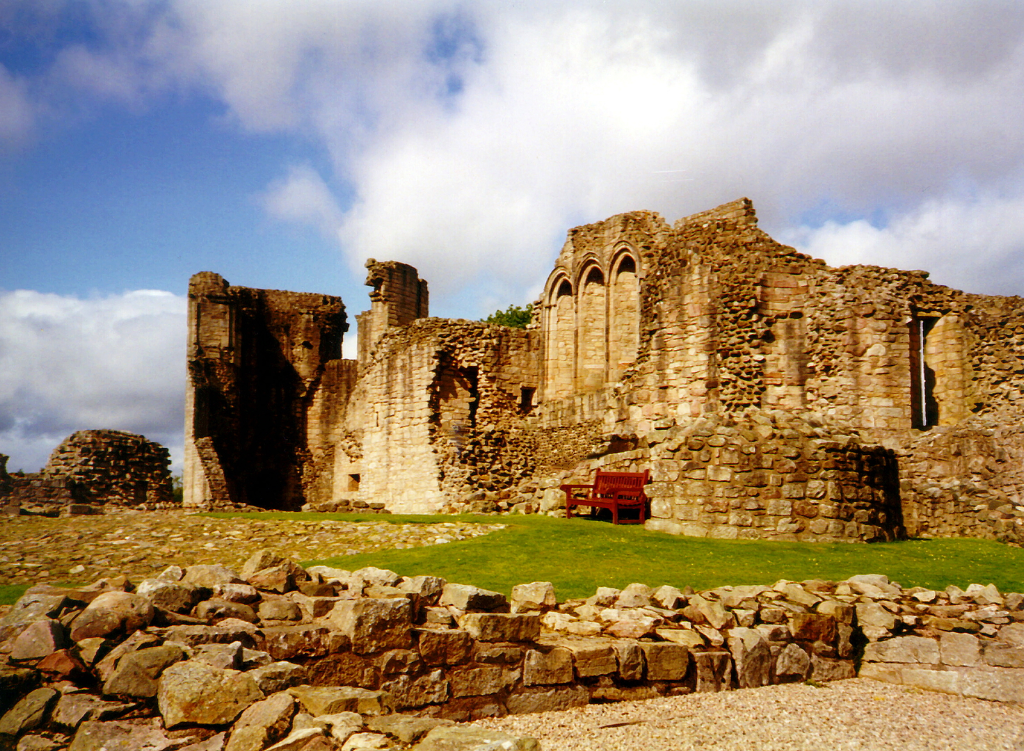 Although now quite ruinous, Kildrummy Castle, built in the 13th century, was one of the largest and mightiest early castles in Scotland, and remains a fine ruin in a picturesque setting. The high curtain walls enclosed a courtyard with six round towers at the corners and gate. One of these, the largest, called The Snow Tower, may have been the main keep, and is similar to that at Coucy. 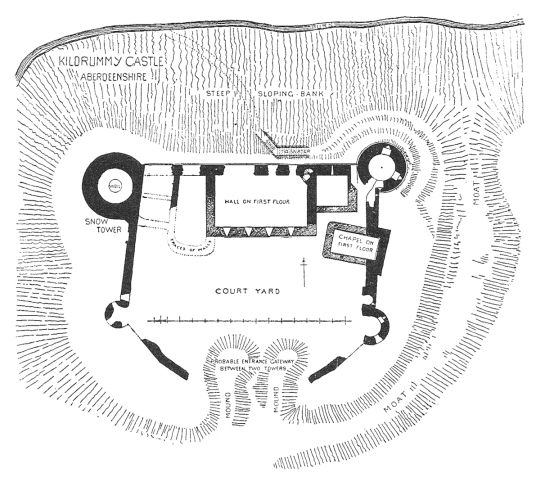 The gatehouse is much reduced, but was formerly defended by two towers, and resembles Edward I’s Welsh castle of Harlech. Nearby was the two-storey hall block, the walls of which are the best preserved part of the castle. There was also a chapel, three tall lancet windows of which remain. The towers at either end of this wall survive in part.
The original castle was built by Gilbert de Moray, Bishop of Caithness, in the 13th century, although there was an earlier stronghold on a motte in Kildrummy burial ground [NJ 473177]. 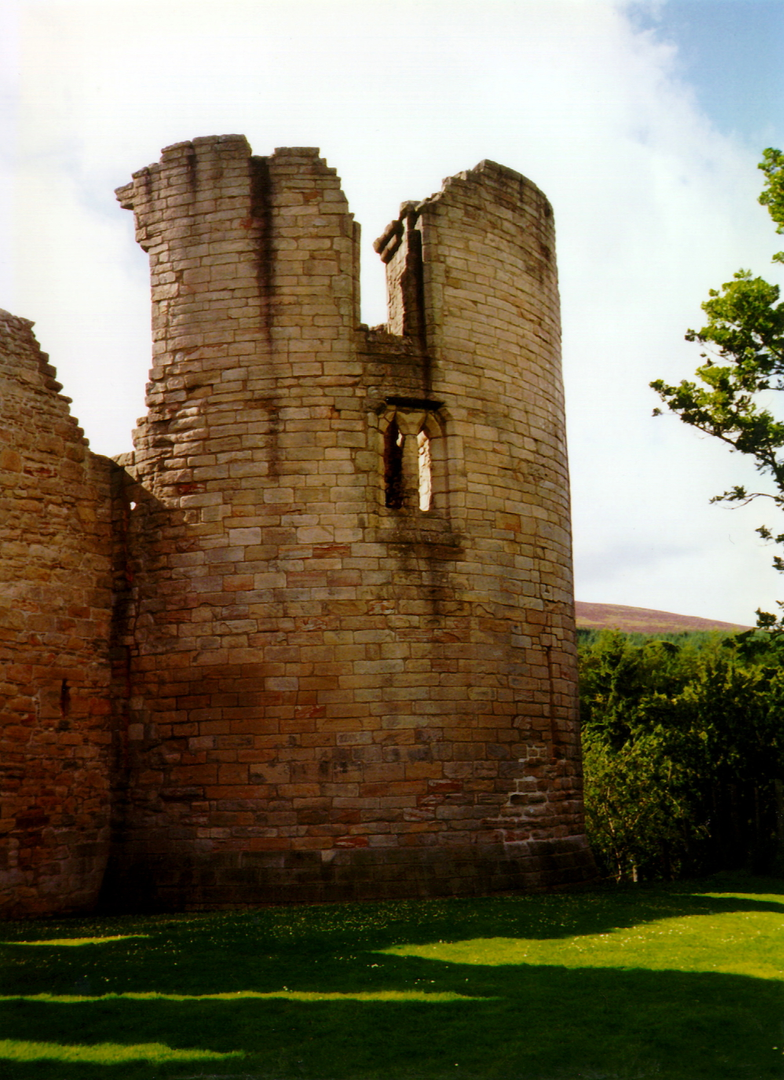 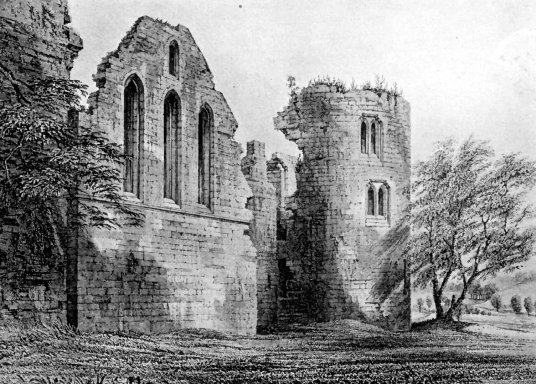 Kildrummy Castle was captured by Edward I of England in 1296, and then again in 1306 from a garrison led by Nigel Bruce, younger brother of Robert the Bruce, after the castle was set alight by a traitor. Nigel Bruce, and the rest of the garrison, were executed by hanging. The traitor was rewarded with much gold – poured molten down his throat. 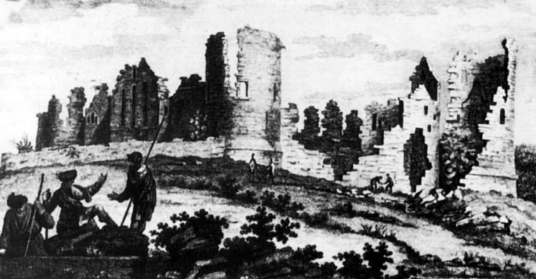 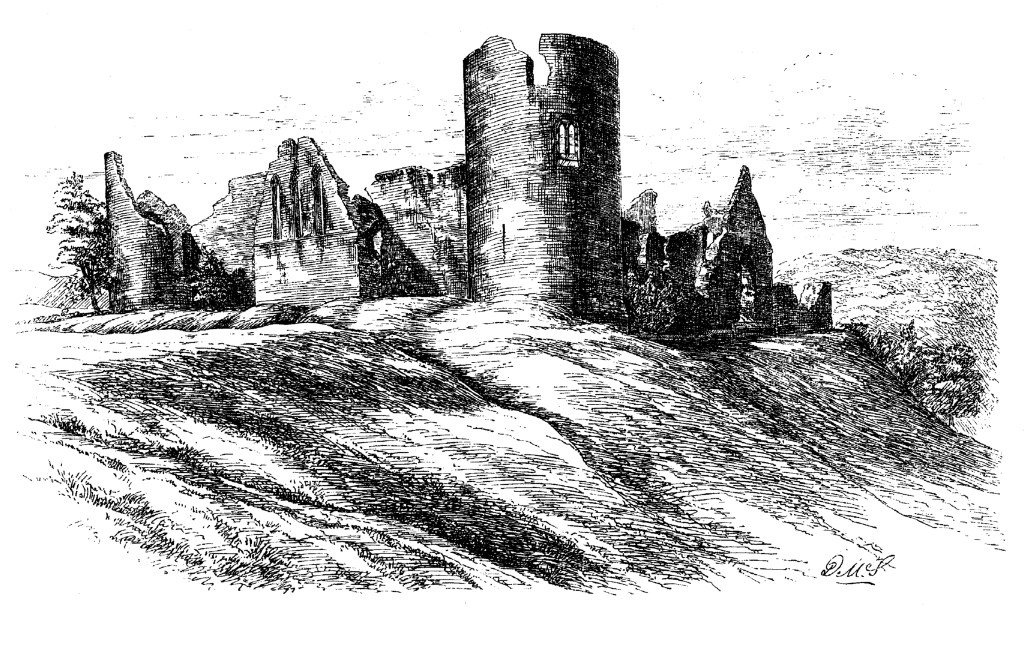 Kildrummy was in royal hands from 1361-8, until Alexander Stewart, son of the Wolf of Badenoch, acquired it after he had forced Isabella Douglas, Countess of Mar, to marry him in 1404. He may have had the poor women’s husband, Sir Malcolm Drummond, kidnapped from Kindrochit Castle. Stewart’s son led the king’s forces at the bloody Battle of Harlaw in 1411 when there was much slaughter on both side after the Lord of the Isles had invaded. 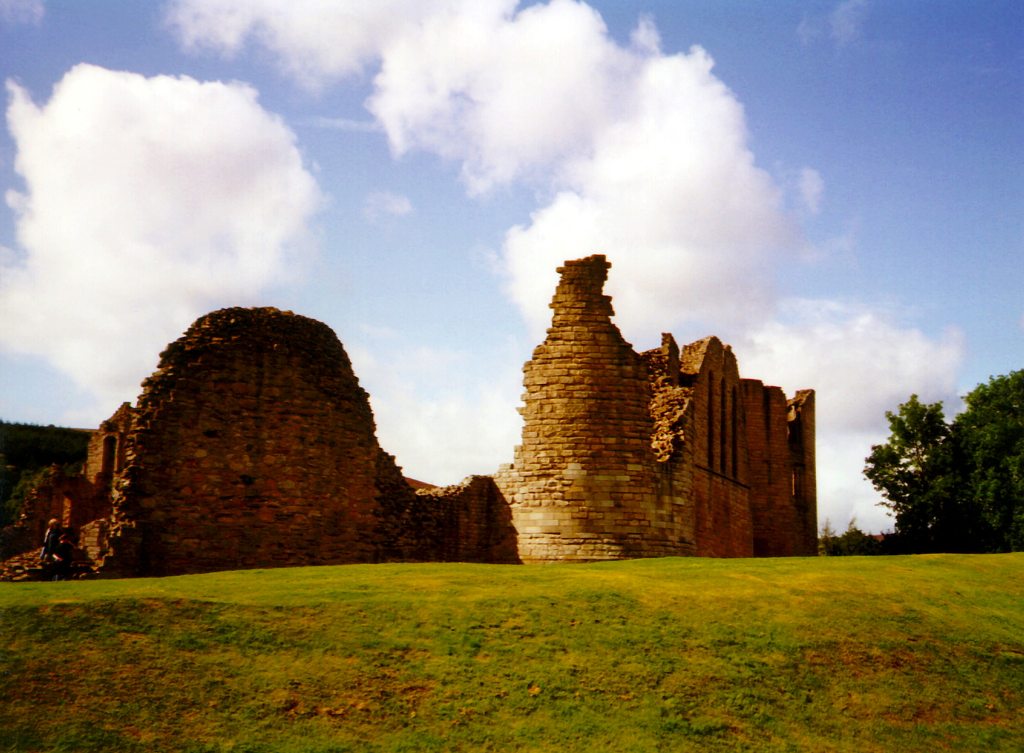 After 1435, Kildrummy was held by the Crown, but it was stormed by the Erskines to no avail in 1442. It later passed to the Cochranes, then to the Elphinstones from 1507-1626, until they were compelled to give it the Erskine Earls of Mar. It was also sacked and torched in 1530 by the freebooter John Strachan of Lynturk, and was captured in 1654 by Cromwell’s forces. 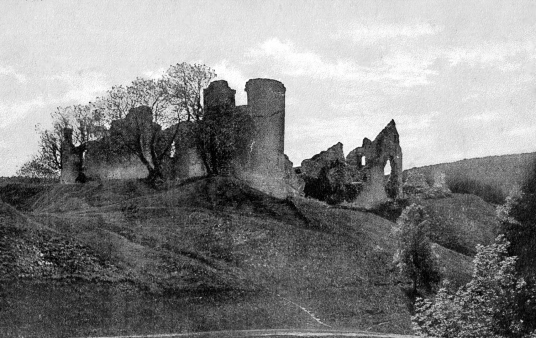 The castle was badly damaged in 1690, when it was burned by Jacobites, but was complete enough for the Earl of Mar to use it as his base when he led the Jacobite Rising in 1715. In 1731 it passed to the Gordons of Wardhouse. 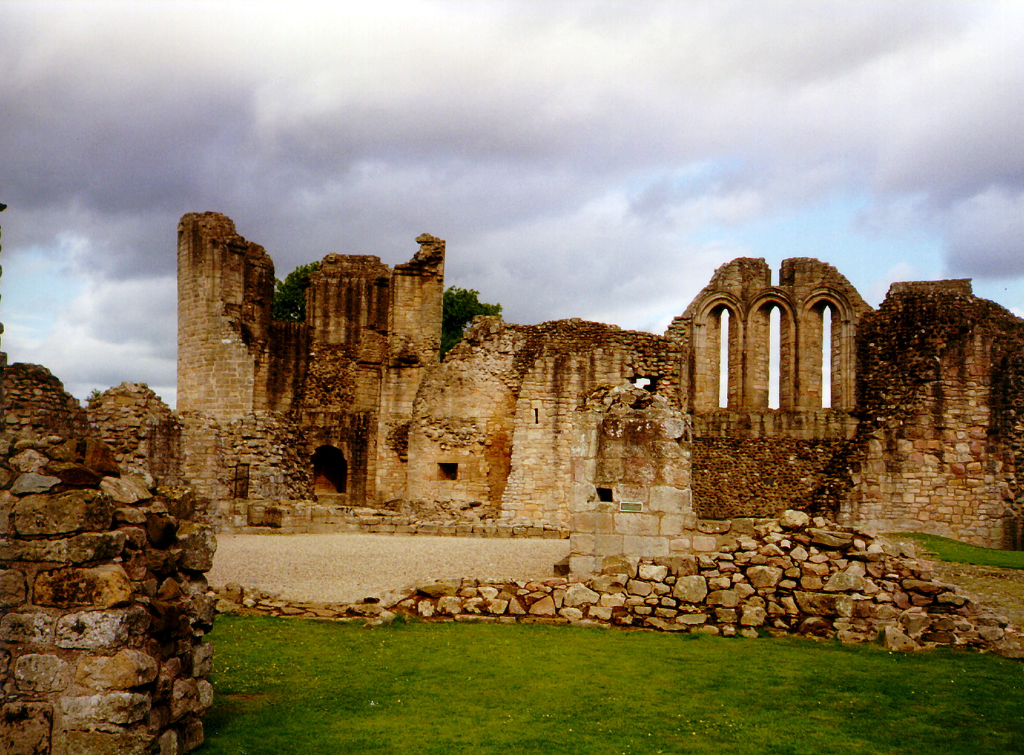 After the collapse of the Jacobite cause, Kildrummy was deliberately dismantled and used as a quarry. This was halted at the beginning of the 19th century, but the ruins were not consolidated until 1898. In 1951 it was put into the care of the State. 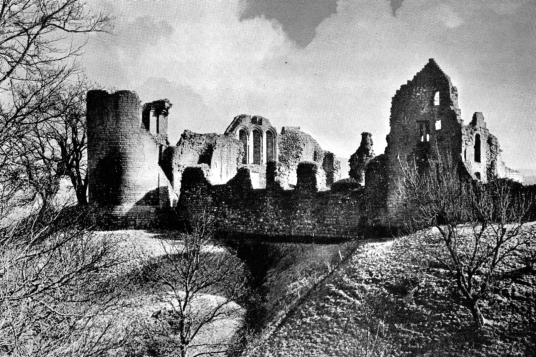