Abbotsford House, the fascinating and atmospheric home of Sir Walter Scott, the famous author, stands in fine wooded grounds and gardens by the River Tweed, near Tweedbank, Melrose and Galashiels in the Borders of Scotland. 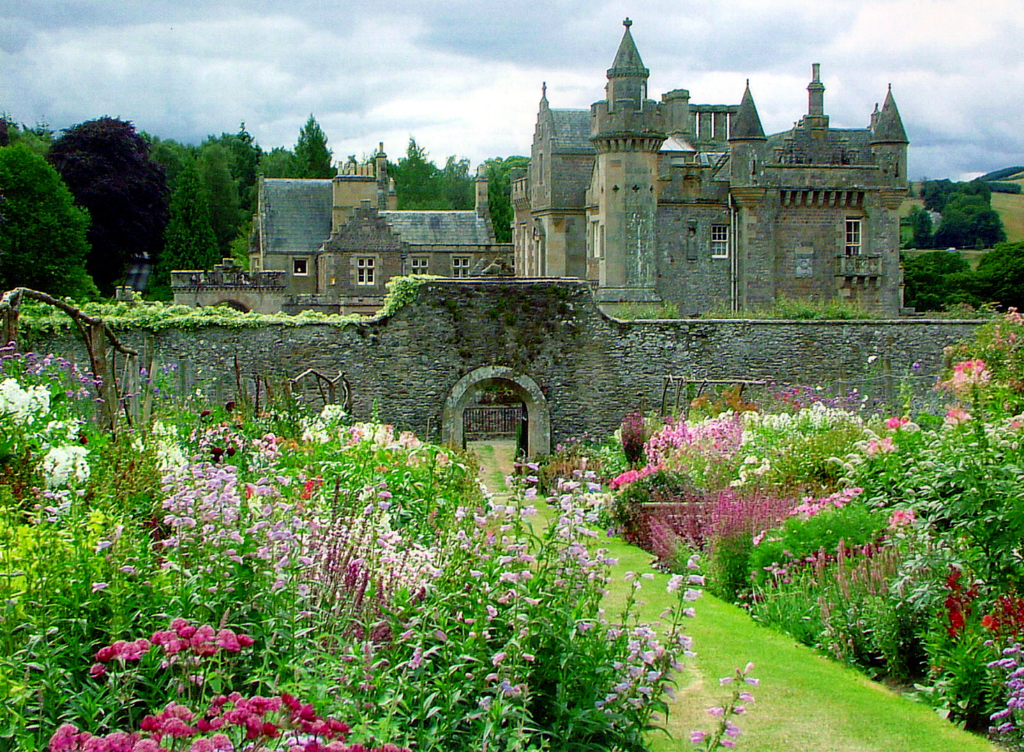 Borders: About 2 miles west of Melrose, just west of B6360, east of River Tweed, at Abbotsford.

The house can be easily accessed from the railway station at Tweedbank on the Borders railway, with a pleasant walk of just over a mile through Tweedbank Park with Gunknowe Loch. 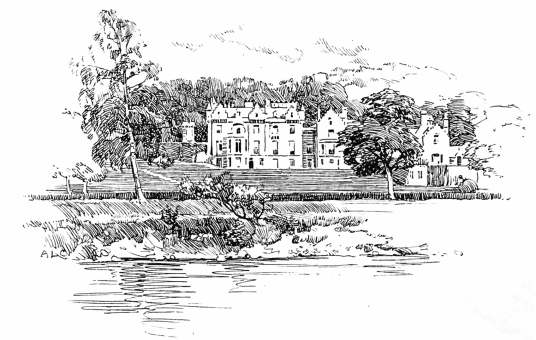 Abbotsford is a fine sprawling baronial mansion with turrets, battlements and corbiestepped gables, mostly of two storeys, and dates from the first quarter of the 19th century. 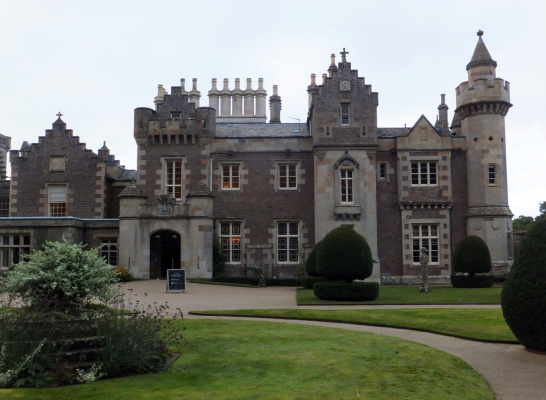 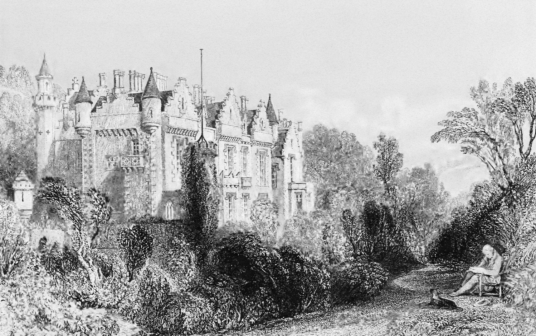 The house was designed by William Atkinson and then Edward Blore, with additions by William Burn in the 1850s, but may incorporate older work. 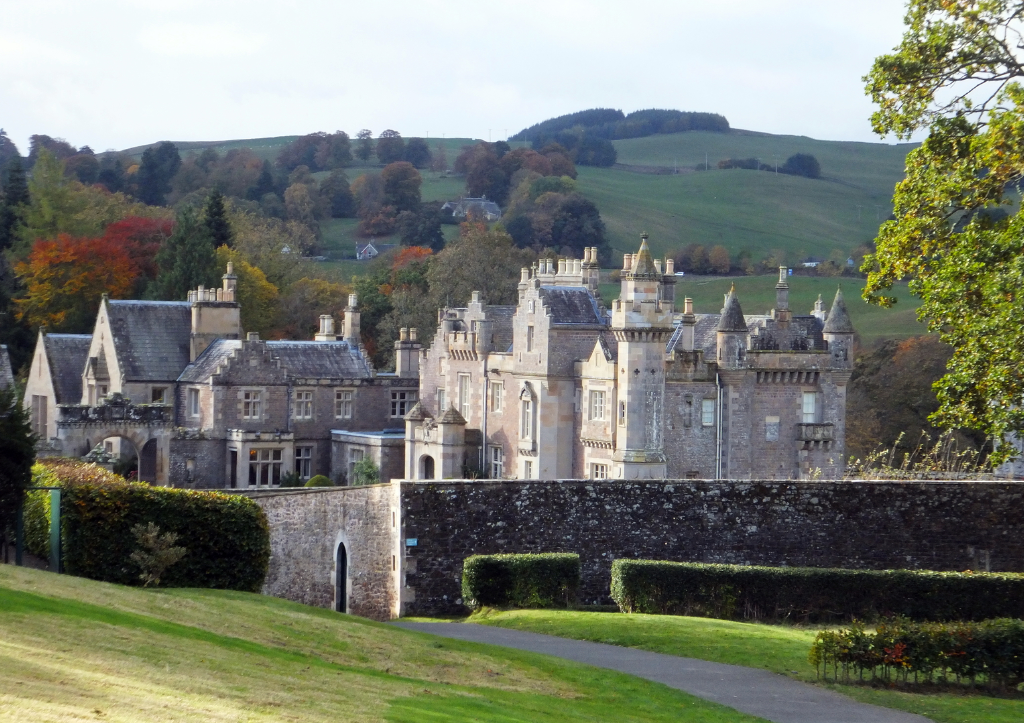 There are two extensive walled gardens, and the house sits in a picturesque location above the River Tweed. 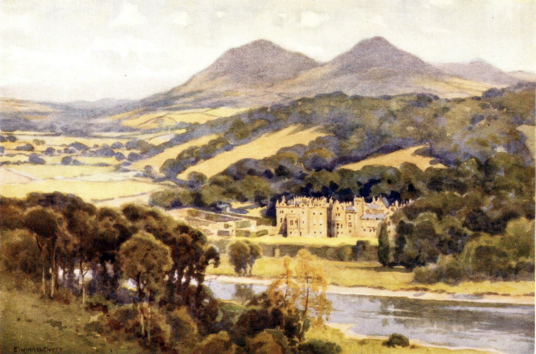 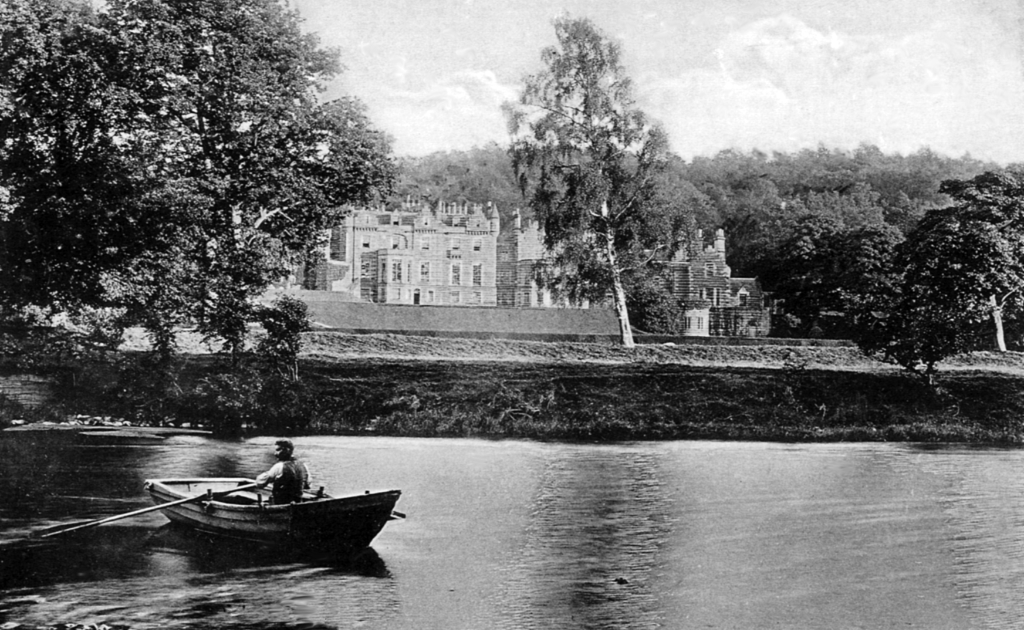 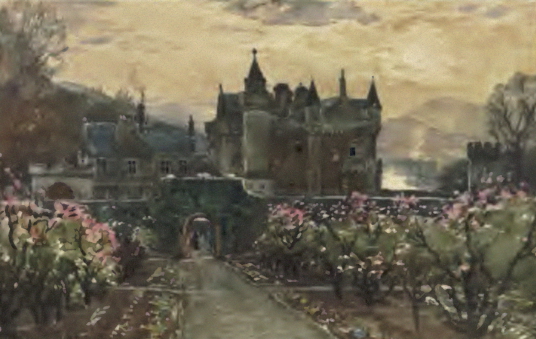 Sir Walter Scott, the famous Scottish writer and historian, bought Cartley Hole farmhouse, by the Tweed, in 1812, which he renamed Abbotsford. He had the old house demolished in 1822, and it was replaced by the main block of Abbotsford as it is today. 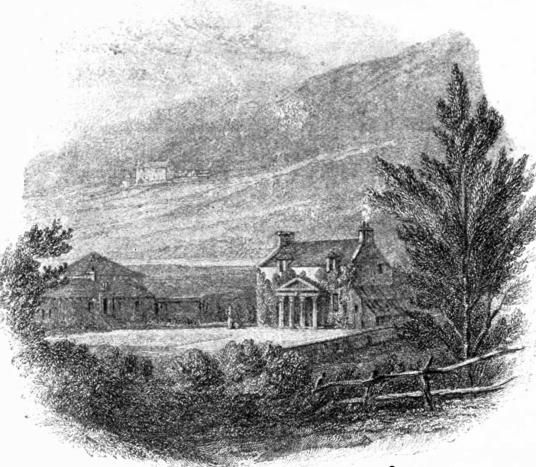 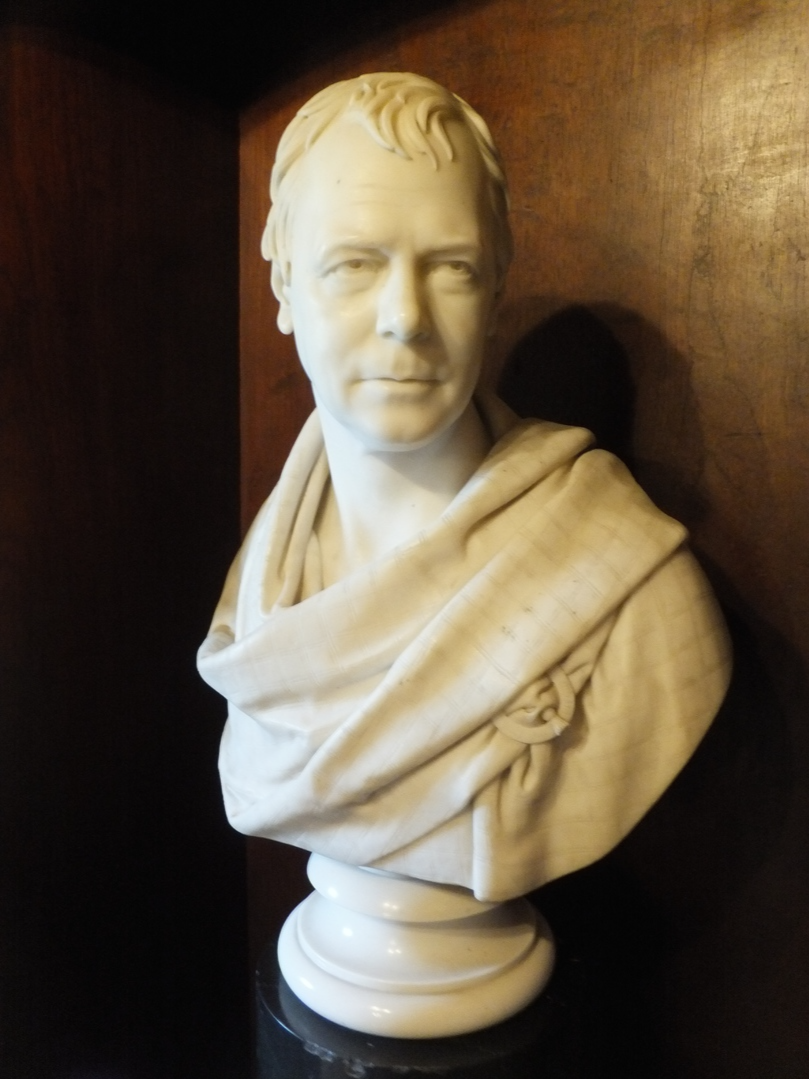 Scott was the most successful and influential authour of his day, indeed some have credited him with inventing the modern novel format. He wrote many works, literary and poetic, including Invahoe, Rob Roy, the Waverley novels, and the Lay of the Last Minstrel. 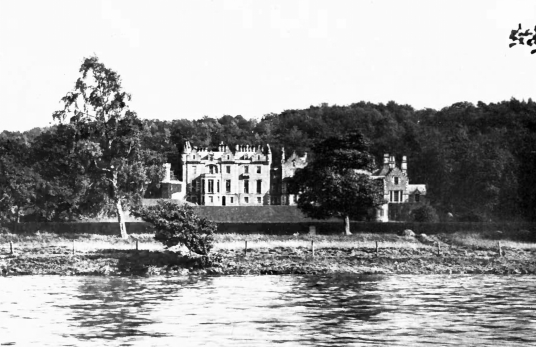 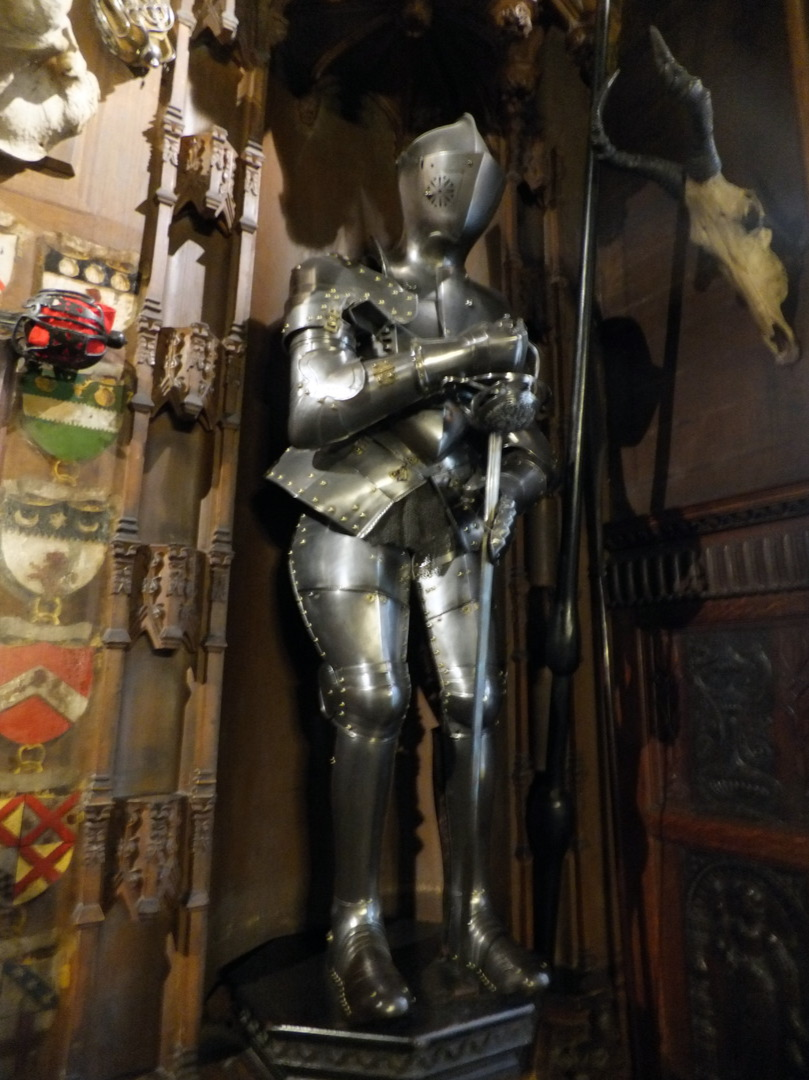 He was also responsible for the rediscovery of the Scottish Crown jewels, now on display at Edinburgh Castle, and with the rehabilitation of the Highlands and Scottish history and traditions, although he was a staunch unionist, having arranged the visit of Geroge IV to Scotland in 1822, the first reigning British monarch to visit Scotland since Charles II in 1650. 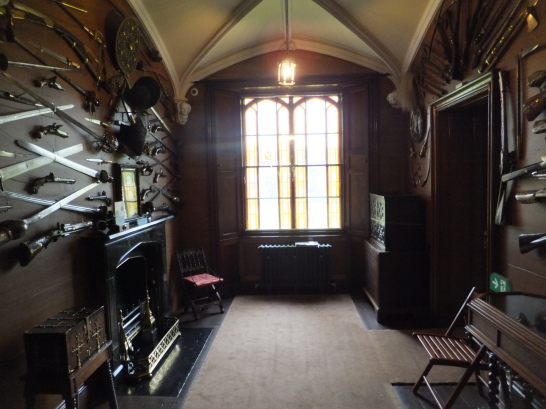 Scott collected many historic artefacts, and there is an impressive collection of armour and weapons at the house, including Rob Roy MacGregor’s gun, a crucifix of Mary Queen of Scots, Claverhouse’s pistol and the Marquis of Montrose’s sword. His library of more than 9000 rare volumes is also preserved at the house. 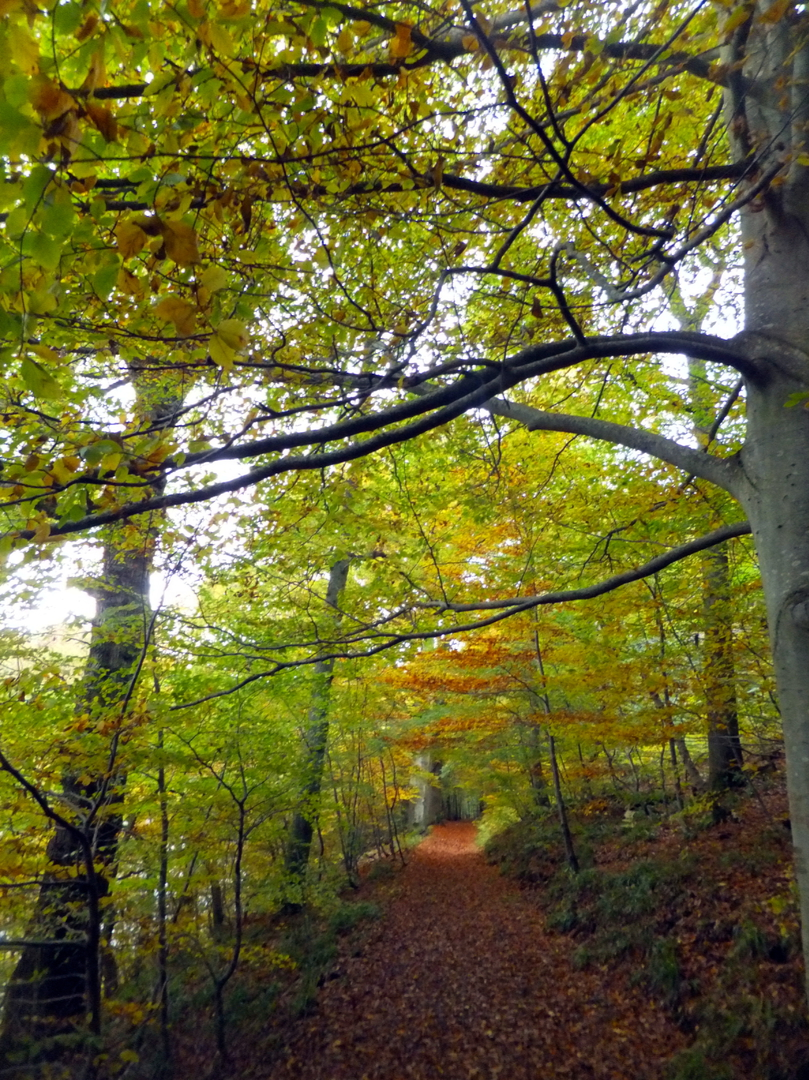 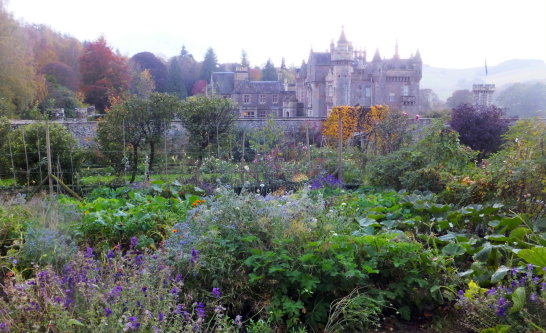 Abbotsford House: house and gardens in the rain (© Martin Coventry)

There are also extensive gardens and grounds, and a private chapel which was added after Scott’s death. 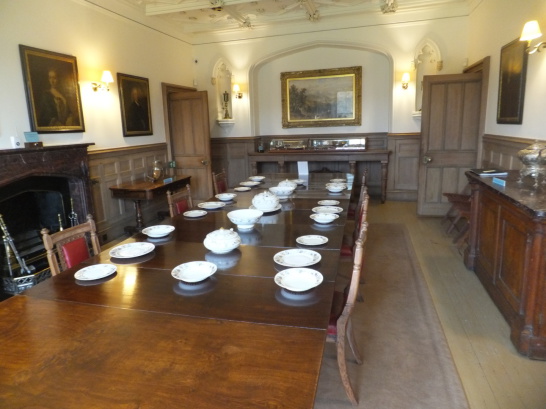 The ghost of Scott is said to haunt the dining room, where he died in 1832 after exhausting himself trying to pay off a huge debt.  Sightings of his apparition have been reported in modern times. Another ghost, said to have been witnessed here, is the spirit of George Bullock, who died in 1818 and was in charge of the rebuilding of Abbotsford. 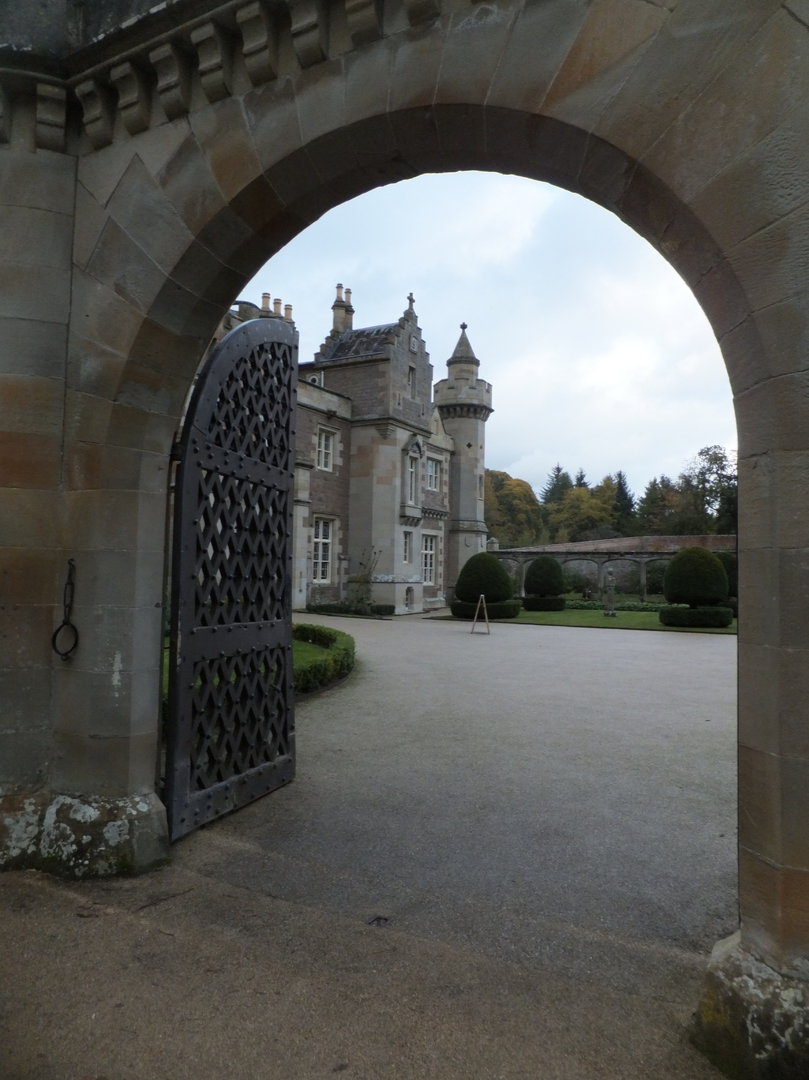 Smailholm Tower has an exhibition of dolls illustrating some of the Border ballads from Scott’s Border Minstrely. 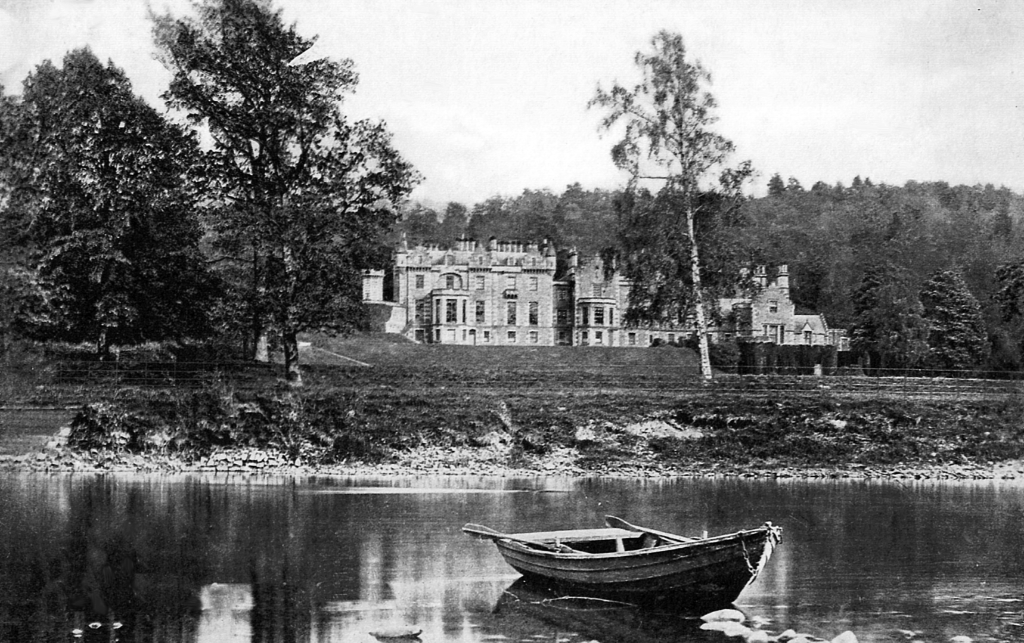 Abbotsford House: from across the Tweed (old postcard) 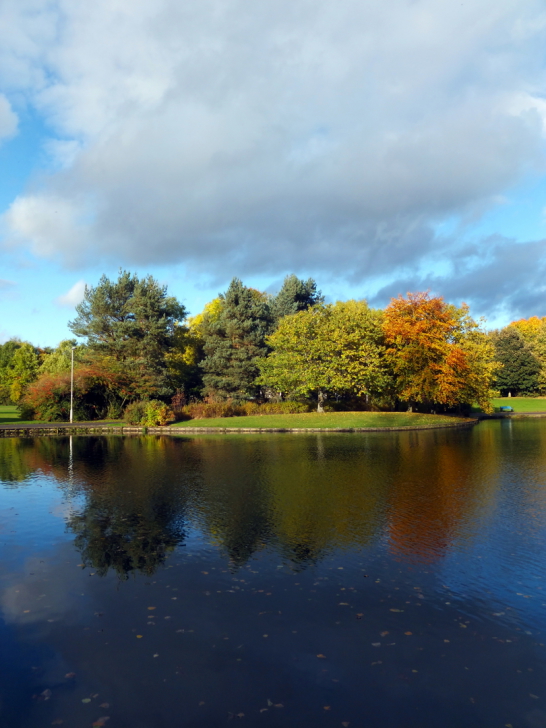