Borders: About 1 mile south of Newcastleton, on east of Hermitage water, between B6357 and minor road, at Mangerton Tower.

OPEN: Access at all reasonable times to ruins of tower and to cross. Walks start from Newcastleton (www.visitnewcastleton.com).

Little remains of a 16th-century tower house, except part of the basement and some low walls. ‘Mangertoun’ is marked on Blaeu’s map of Liddesdale. There is a carved stone with the initials of Simon Armstrong, 9th of Mangerton, and his wife, Elizabeth Foster of Kirsopfoot. Simon died in 1583.
This was a property of the Armstrongs and residence of the head of their family. The Armstrongs were very powerful on the Border, and the English Warden of the Marches attacked and sacked the tower in 1523. One of the family, John ‘Black Jock’ Armstrong, was executed for reiving in 1530. The tower was also burnt in 1543, slighted and burned in 1569, although soon rebuilt, and torched again 1601. The Armstrongs of Mangerton were accused of raiding Tynedale in 1593, and Archibald Armstrong, last of the Armstrong lairds, was hanged in 1610 for raiding England and thieving cattle from Penrith – many of the family went to Ulster. Most of their towers, of which there were many, were then demolished. The property, including the tower, passed to the Scotts in 1629. 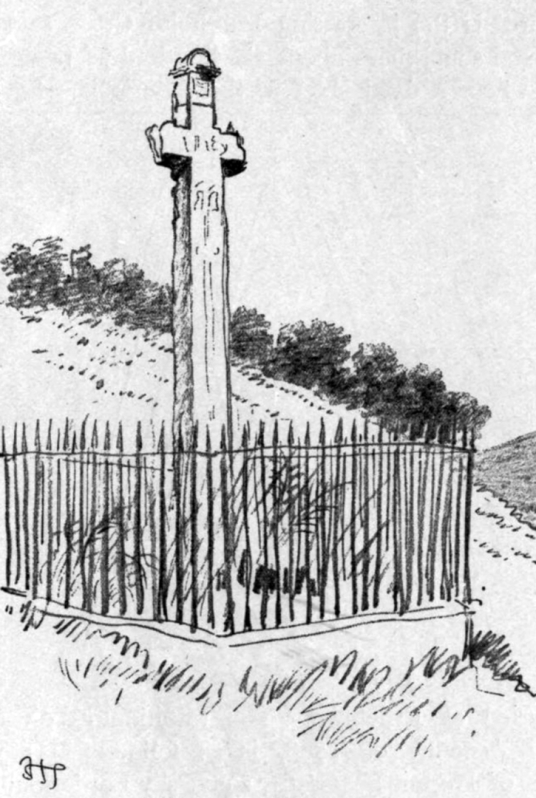 By the side of the B6357 is the Millholm Cross [NT 476861], which was put here around 1320, to commemorate Alexander Armstrong of Mangerton, who was murdered in Hermitage Castle and buried in Ettleton graveyard [NY 472863]. There are some carved gravestones and fragments of carved crosses.