Angus & Dundee: About 6.5 miles east of Forfar, on minor roads north of A932, just west of hamlet of Guthrie, south-east of Guthrie Hill, at Guthrie Castle. 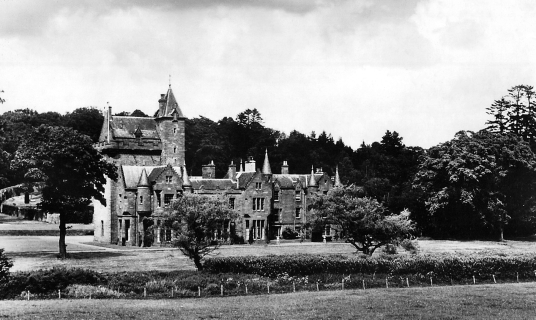 Standing in 150 acres of mature woodland, Guthrie Castle consists of an altered and picturesque 15th-century tower of three storeys and a garret, square in plan, to which has been added a 19th-century mansion of 1818, which was extended in 1848 by David Bryce. The tower has a small projecting stair-wing crowned by a caphouse, and a restored crenellated parapet with open rounds.
The original entrance is in the middle of one side and opens into a lobby, which leads to the vaulted basement and to a straight stair, in the thickness of the walling, to the first-floor hall. The upper floors were reached by the turnpike stair in the wing. There are some fine wall paintings. The yett survives, although it now at the entrance to a garden, and there is a walled garden and an old sundial [NO 562505], which dates from the 17th century. 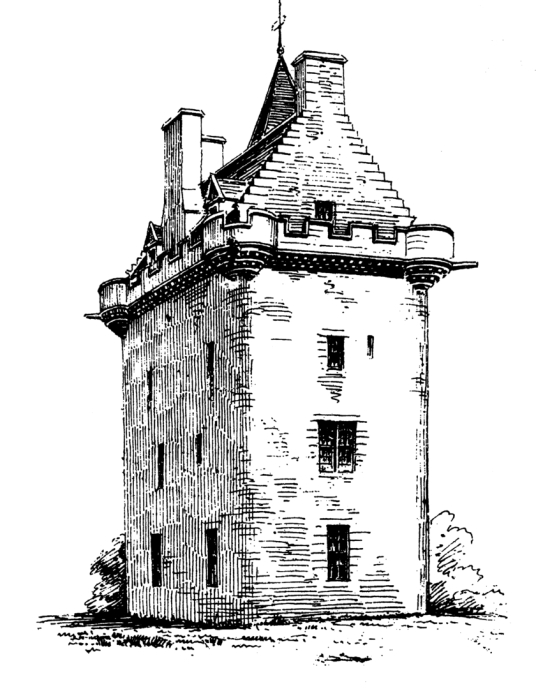 ‘Guthree’ is marked on Pont’s map of Perthshire and Angus, and is depicted as a large tower of four storeys in a courtyard, with outbuildings or towers.
The original tower was built by the Guthries of Kincaldrum around 1470. Sir David Guthrie, 1st laird, had been Armour Bearer to James II and was Lord High Treasurer of Scotland and Lord Chief Justice. Sir Alexander Guthrie was killed at the Battle of Flodden in 1513. 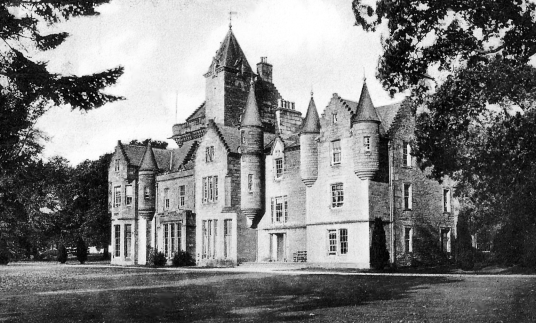 A Guthrie married a Gardyne in 1558 and their son, quarrelling with his relatives, was stabbed to death by his Gardyne cousin, so starting a long feud. Patrick Gardyne was slain in 1578 by William Guthrie, but 10 years later the Gardynes succeeded in murdering a Guthrie laird. Two years after this the Guthries fell upon the Gardyne family, and murdered their chief and others. Both families were forfeited by James VI, losing their lands, but while the Guthries recovered theirs, the Gardynes never did.
The castle was remodelled by David Bryce in 1848, and the estate was held by the family until the 1980s. The Guthries now live in Australia.

The castle was in the news in 2016 because an employee double or even triple booked weddings and then pocketed the money, defrauding more than £130,000. He then fled to Ibiza.The owners paid back the money, and the employee was tried and sent to prison for 2.5 years.
There is a burial aisle [NO 567504] at Guthrie, known as the Guthrie Aisle, added to a church dating from the late 15th century. The rest of the church was demolished in 1826 and replaced by the present building. The Guthrie Aisle was decorated with wall paintings depicting the Judgement on one side and Passion scenes on the other. The boards are on display in the National Museum of Scotland.
The castle is said to have a very kind ghost, the spirit of one of the Guthrie ladies or one of their servants, dressed in black and with a large bunch of keys. The benign bogle is believed to be concerned for the welfare of guests.