Blair Castle, the magnificent castle with a sumptuous interior of the Murray Dukes of Atholl, set in lovely gardens and an extensive estate in a magnificent mountainous location, at Blair Atholl near Pitlochry in Perthshire in Scotland. 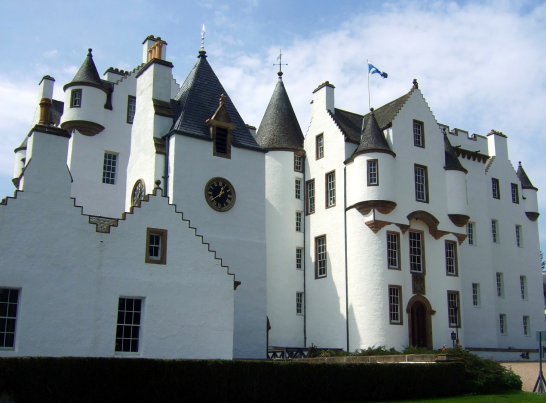 Perthshire: About 7 miles north-west of Pitlochry, 1 mile north-west of Blair Atholl, on minor roads north of B8079 from A9, at Blair Castle. 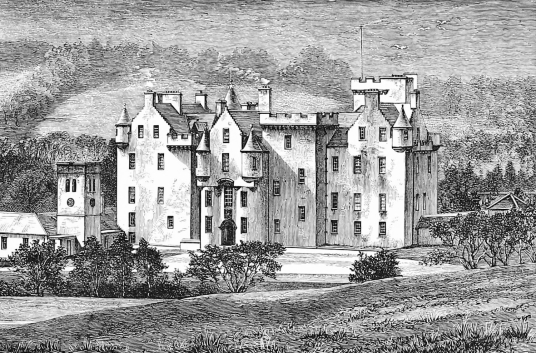 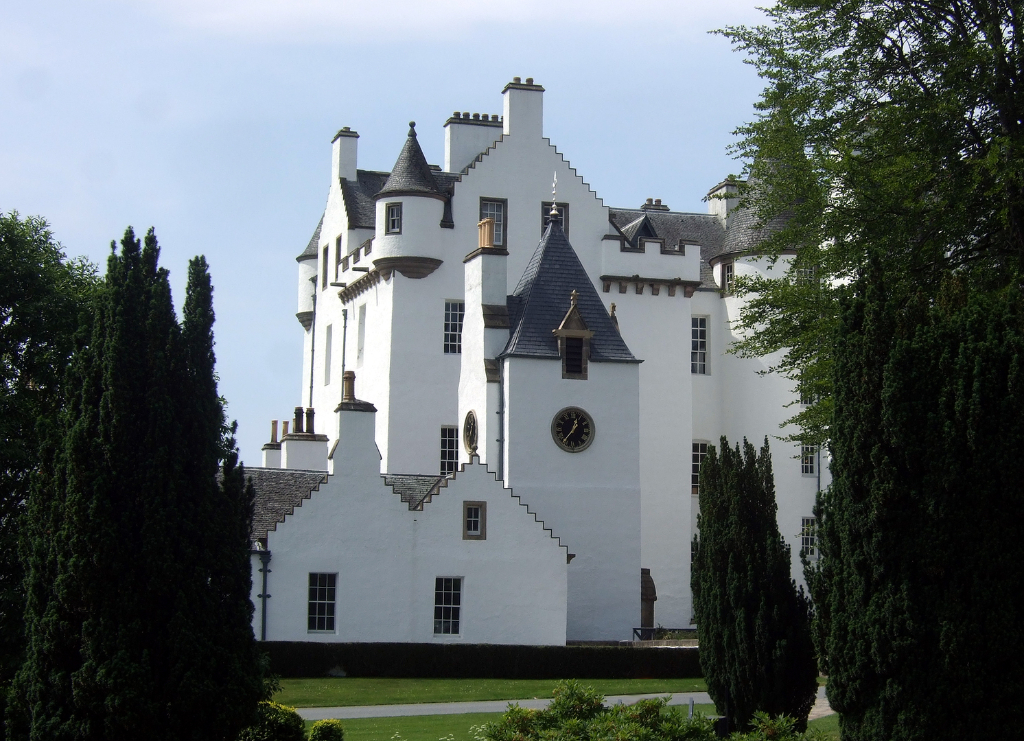 Standing in a beautiful mountainous location in an extensive estate, Blair Castle is a fairytale old castle and mansion. 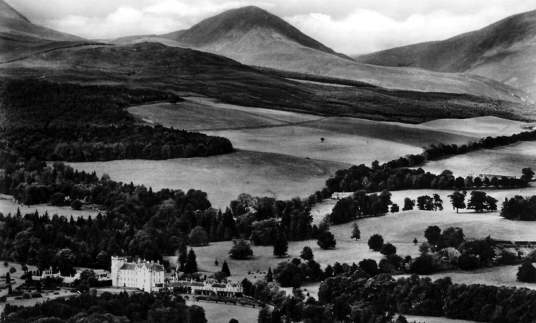 Blair Castle is a large and rambling building, rising to four storeys and an attic, with distinctive whitewashed walls and a flourish of towers, bartizans, battlements, and corbiestepped gables. The castle incorporates the 13th-century Comyn’s Tower, of which only the lower part survives. The building was then added to through the centuries, then completely remodelled in the 18th century, with the removal of its upper storeys, to turn it into a Georgian mansion. John, 7th Duke of Atholl, had the architect David Bryce restore the look of the mansion back to the original in 1872. 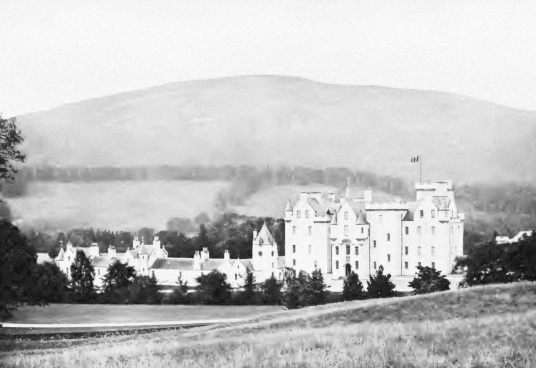 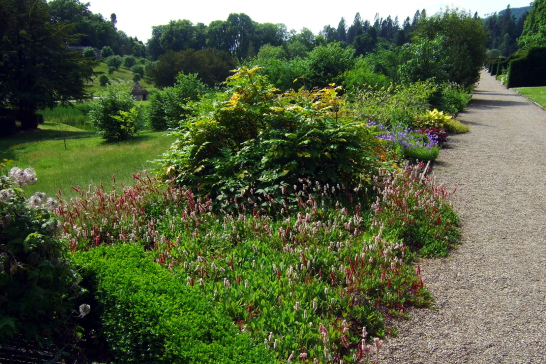 The castle stands in acres of attractive parkland and grounds, and there is a huge nine acre walled garden, the Hercules Garden, with colourful borders, ponds, orchard and a canal. There is also a wooded grove, the ruined St Bride's Kirk and an extensive deer park. There are peacocks on the grounds, as well as The Whim, an 18th-century folly, and the sculpture trail. The vast estate covers some 145,700 acres of land, most of which is used as a deer park, along with forestry and agriculture. 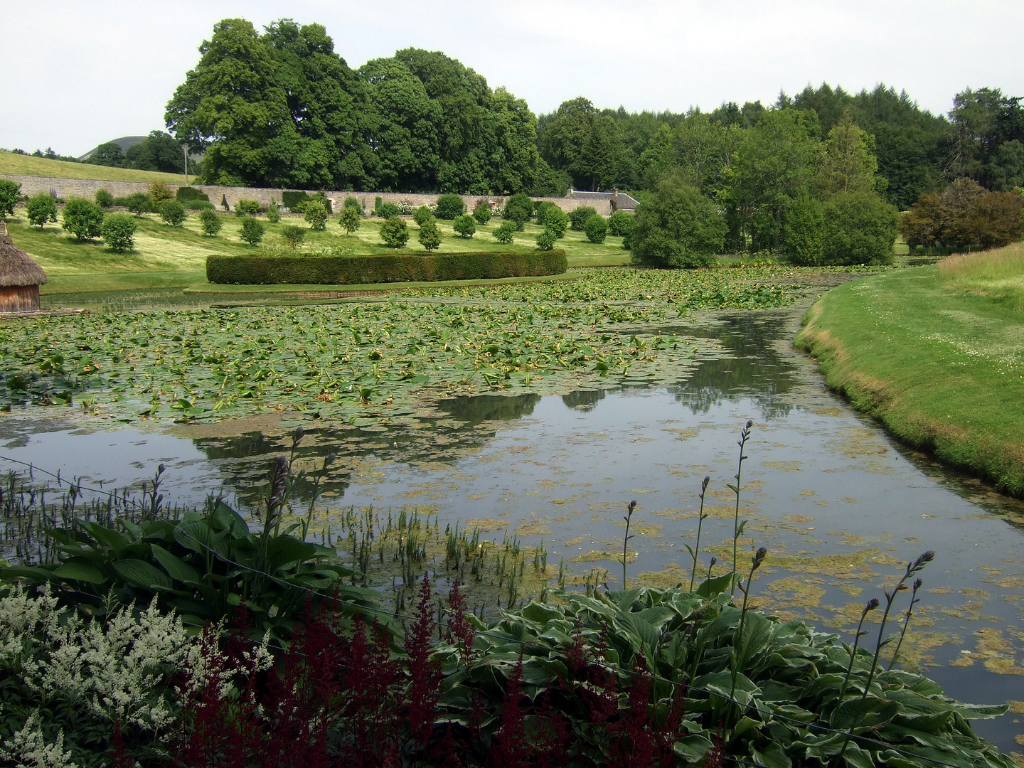 The castle has a sumptuous interior with a flourish of 18th century plasterwork in the imposing dining room and grand drawing room. 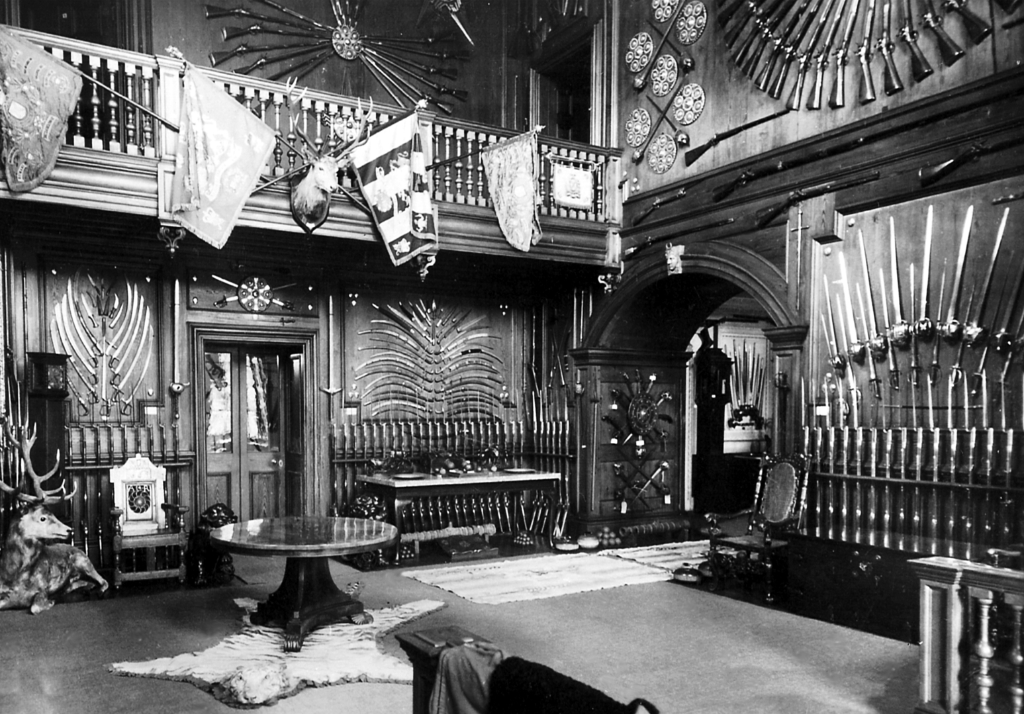 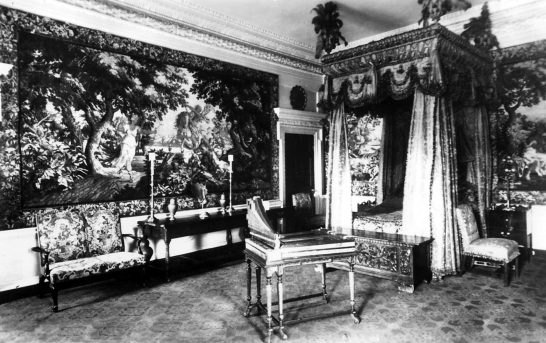 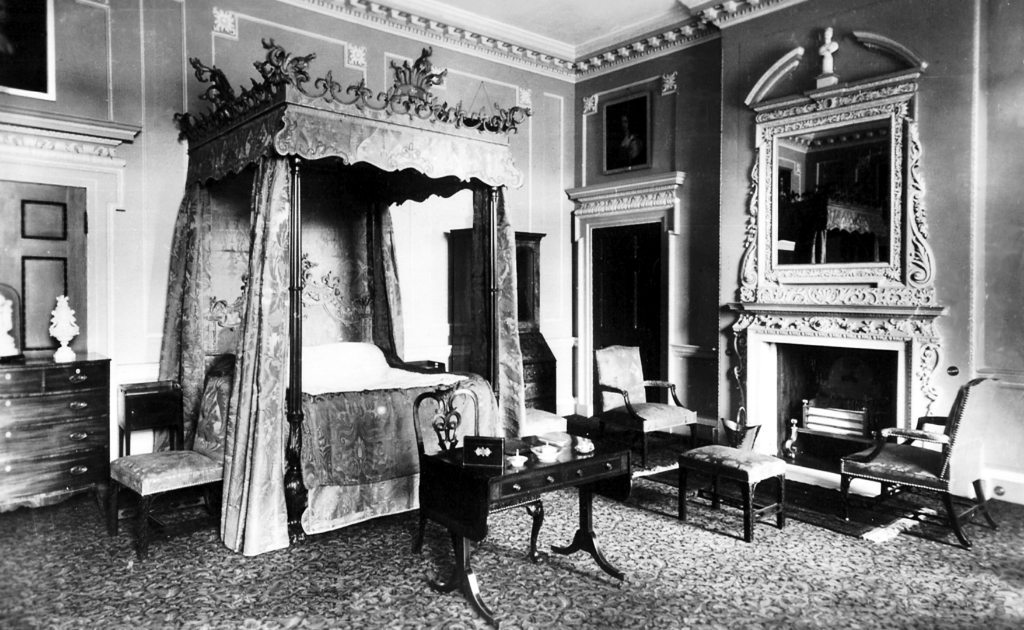 ‘Blair Castel’ is marked on Pont’s map of the Forest of Atholl, and is depicted as a large tower of five storeys with turrets and a garden. 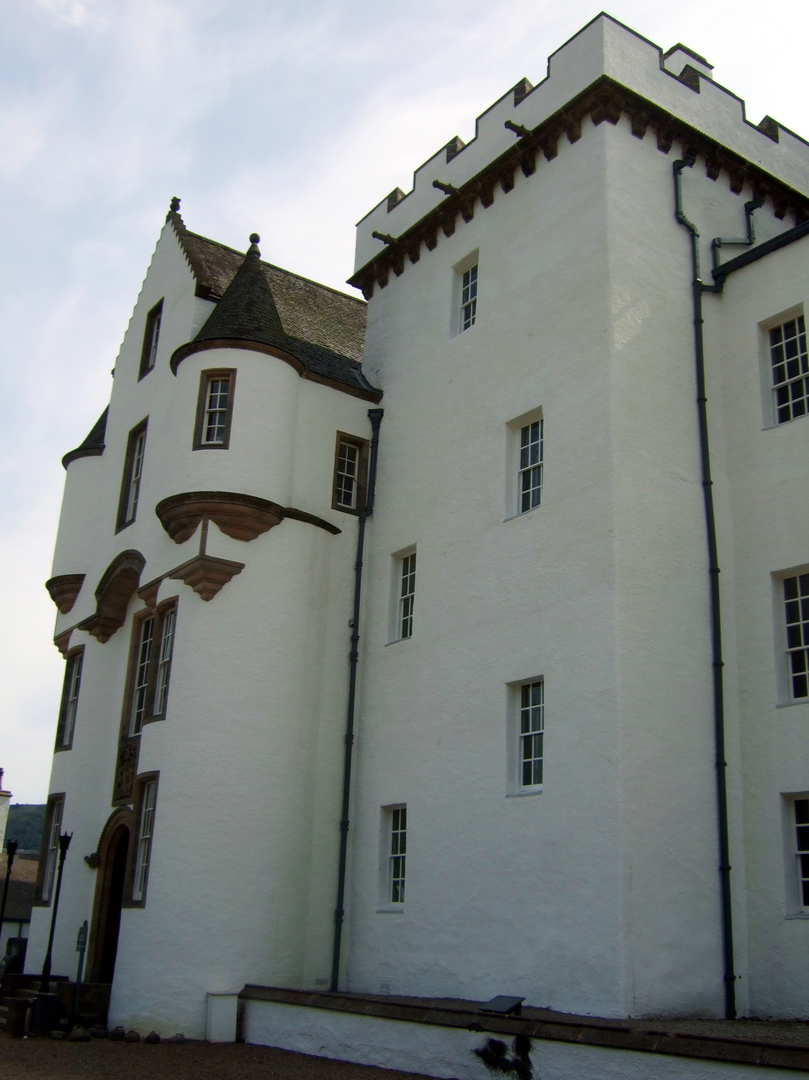 In 1263 the Comyns built a castle here on lands actually owned by David Strathbogie, Earl of Atholl. Edward III of England stayed at the castle in 1336. James V visited in 1529, as did Mary, Queen of Scots, in 1564. 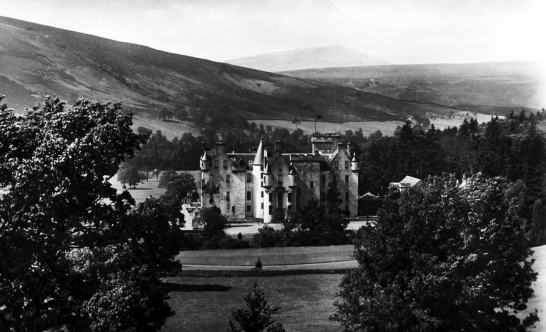 The property had passed to the Stewarts, and John Stewart was made Earl of Atholl in 1457, then the title passed to the Stewarts of Innermeath in in 1596 before becoming extinct on the death of James Stewart in 1625 without issue. In 1629 the title was granted to John Murray, Master of Tullibardine, after he had married Dorothy Stewart, heiress to the lands. 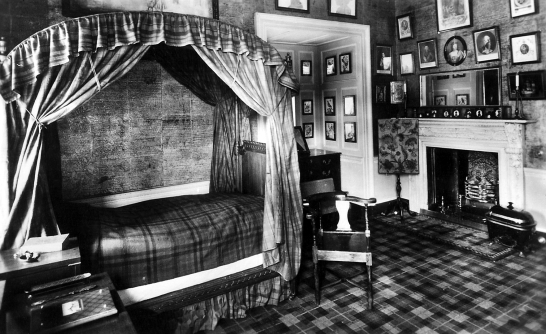 James Graham, Marquis of Montrose, used Blair Castle as a mustering point before his victory of Battle of Tippermuir, and in 1653 the castle was besieged, captured and partly destroyed with powder by Colonel Daniel, one of Oliver Cromwell’s commanders. The castle was complete enough for John Murray, young Earl of Atholl, to try to recapture it in 1654. John was also 3rd Earl of Tullibardine, and he was made Marquis of Atholl in 1676. 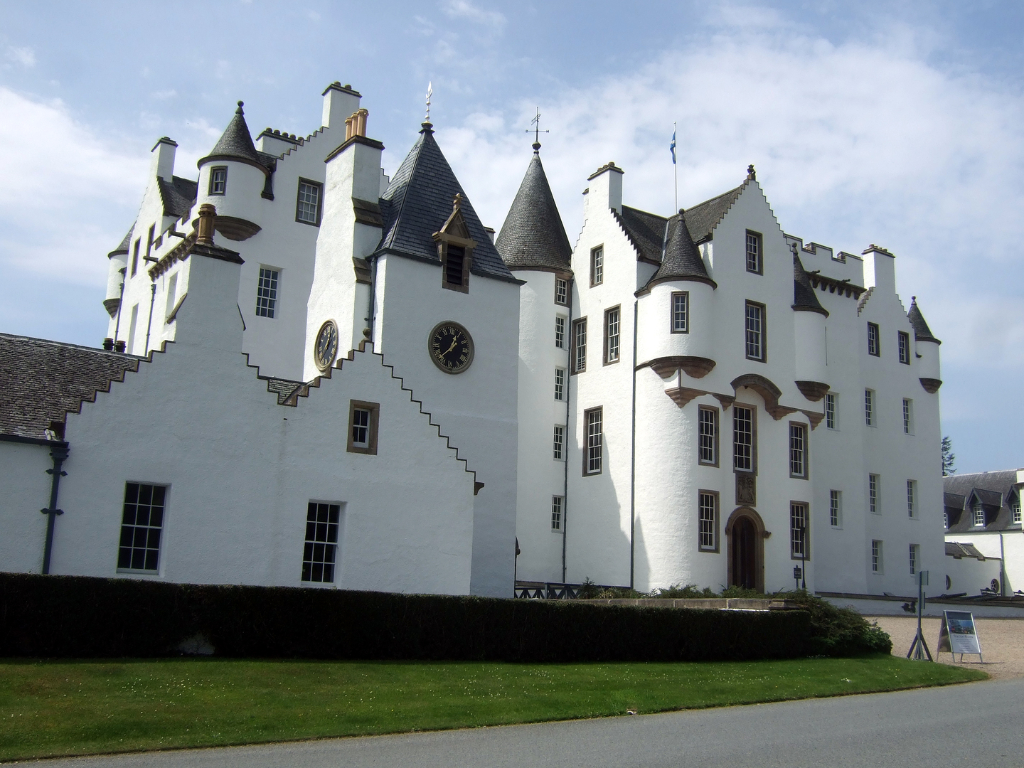 The castle was garrisoned by Bonnie Dundee, John Graham of Claverhouse, in 1689, and it was here that his body was brought after the Battle of Killiecrankie. John Murray, 2nd Marquis of Atholl, was made Duke of Atholl in 1703 and also Marquis of Tullibardine. 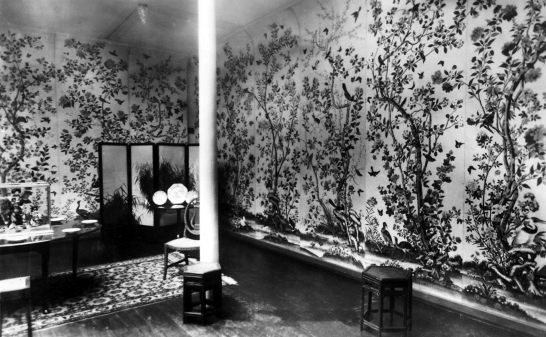 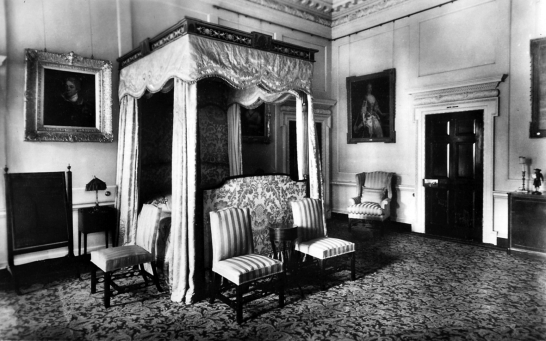 Bonnie Prince Charlie stayed at Blair in 1745, during the Rising. The following year the castle was held by Hanoverian forces, and attacked and damaged by Lord George Murray, Bonnie Prince Charlie’s general and brother to James, 2nd Duke of Murray. It is the last castle in Britain to have been besieged. The 2nd Duke had gained the sovereignty of the Isle of Man in 1736, which was held until after the Duke's death, but in 1765 it was given to the Crown. Robert Burns visited in 1787, as did Queen Victoria. 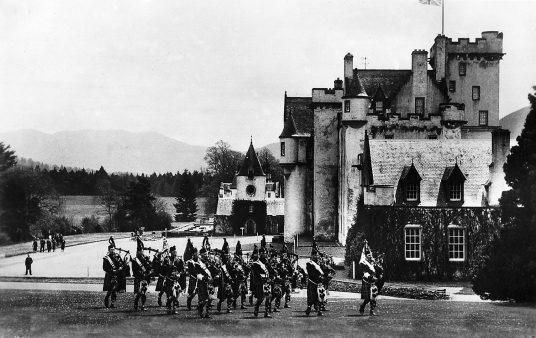 The Atholl Highlanders is the only private regiment in Britain, and is not part of the British Army, although it is only for ceremonial purposes and is made up of employees of the Duke of Atholl. A regiment was originally raised in 1777 by John Murray, 4th Duke of Atholl, as the 77th Regiment of Foot, but it was disbanded a few years later. George Murray, 6th Duke of Atholl, organised a ceremonial bodyguard from estate workers for the mock-medieval Eglinton Tournament in 1839. After a stay at Blair Castle, Queen Victoria gave the regiment colours, so giving them official status. 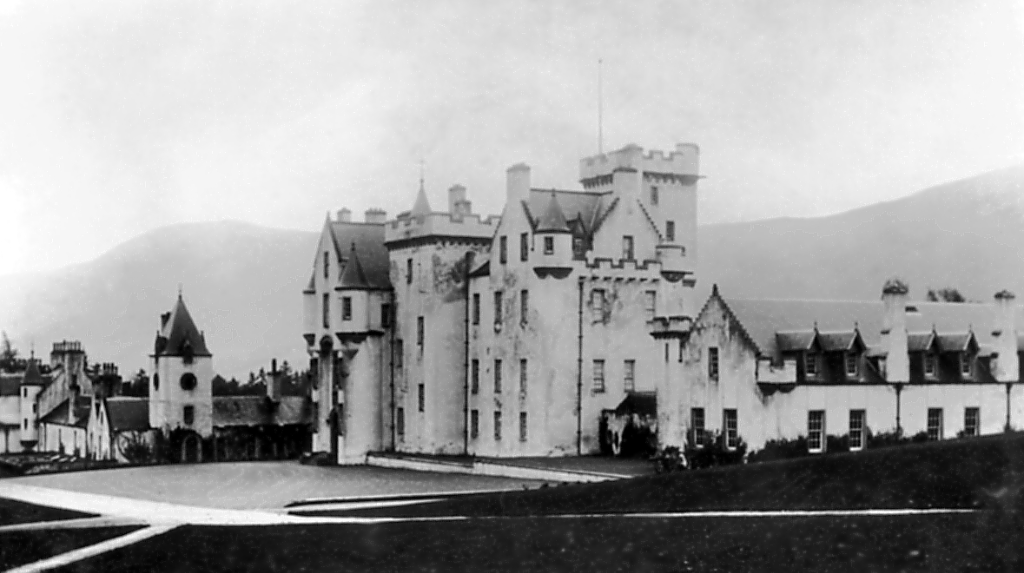 The present incumbent is Bruce George Ronald Murray, 12th Duke of Atholl, and subsidiary titles include Viscount of Balquhidder, Glenalmond and Glenlyon, Marquis of Tullibardine and Earl of  Strathtay and Strathardle.

Members of the family of Dukes of Atholl are buried in a vault in the chapter house at Dunkeld Cathedral [NO 024426].
The castle is said to have a ‘Grey Lady’, that glides about silently (although this may be a confusion with Blair Castle in Ayrshire).