Carnasserie Castle, an imposing and atmospheric old ruinous castle and hall house above the road, built by John Carswell, Bishop of the Isles, and later held by the Campbells, near Kilmartin in Argyll on the west coast of Scotland. 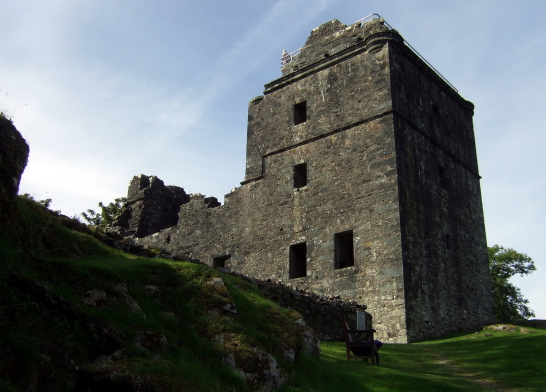 Argyll & Dunbartonshire: About 8.5 miles north of Lochgilphead, on minor road west of A816, west of the Kilmartin Burn, 1 mile north of Kilmartin village, at Carnasserie Castle.

OPEN: Access at all reasonable times – short but steep walk up to the castle.
Web: www.historicenvironment.scot 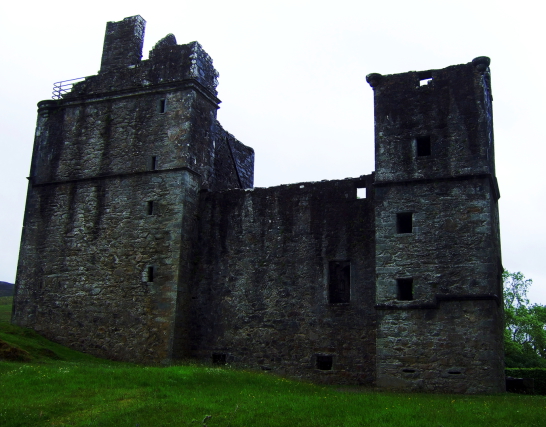 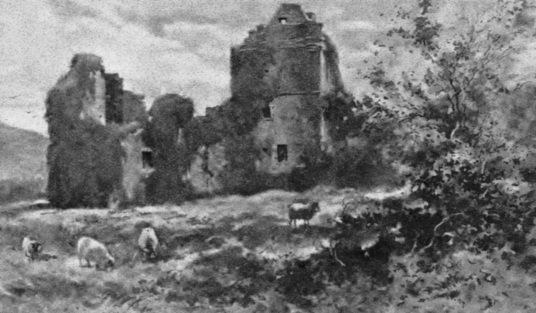 Standing in a brooding spot above the road, Carnasserie Castle consists of a large ruined 16th-century tower house, of five storeys and a garret, and an integral lower hall-block and second tower, which contains the entrance and a wide stair. The parapet has open rounds at three of the corners, and a corbelled-out bartizan at the other. The walls are pierced by many gunloops and shot-holes. A courtyard has an arch dated 1681. 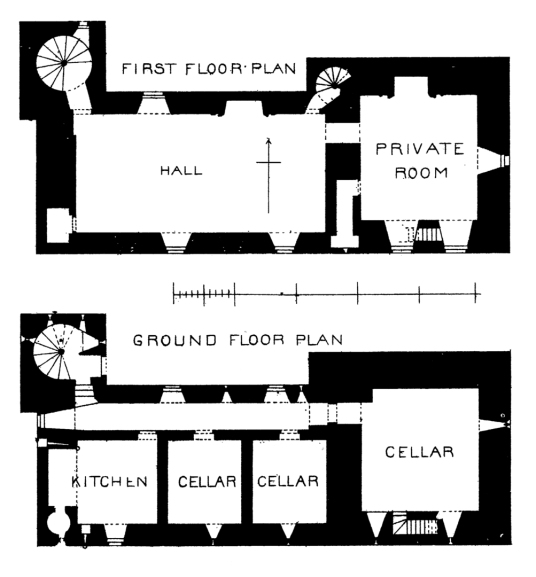 The entrance, in one corner of the tower, is surmounted by a Gaelic inscription urging faith in God. The entrance to the vaulted basement leads, through a long narrow passage, to a wine-cellar, a kitchen with a fireplace and stone sink, and other cellars. The stone vaults have gone. 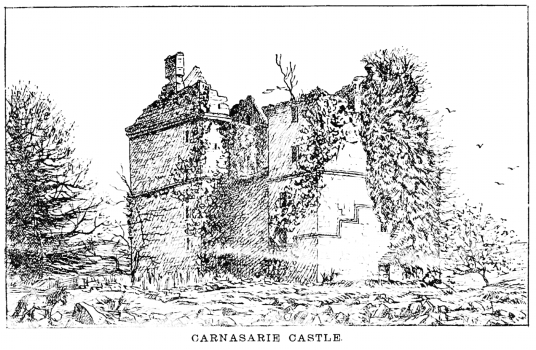 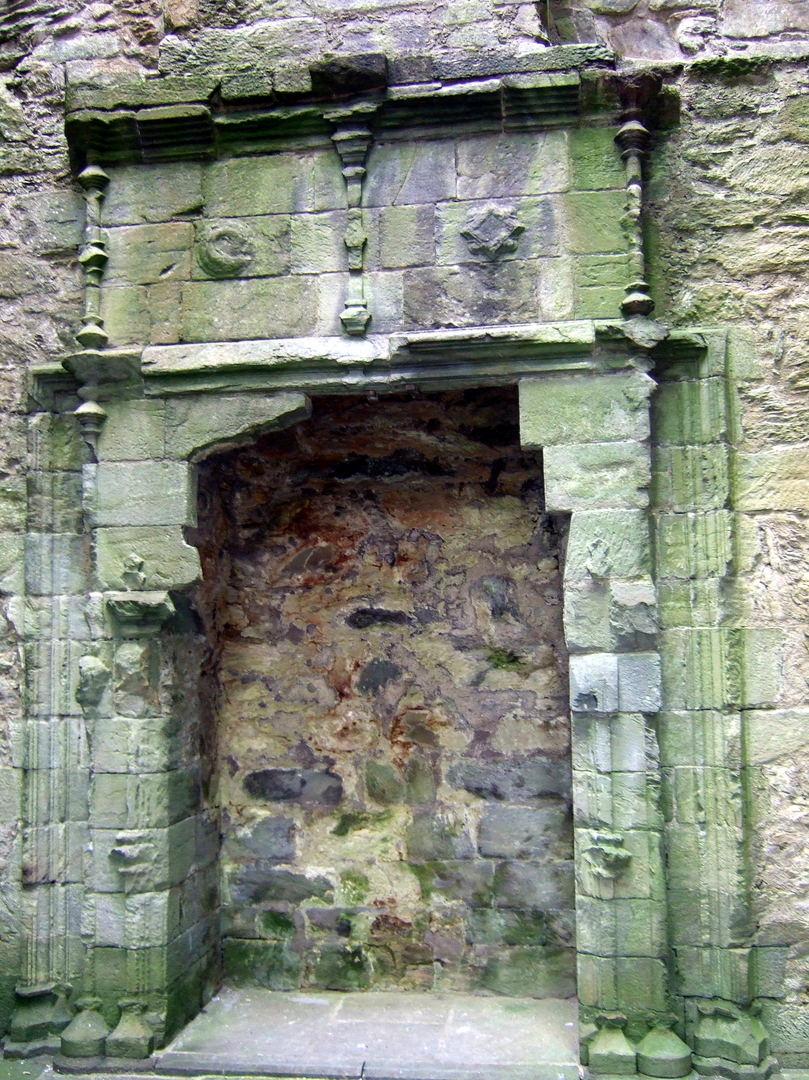 The hall, on the first floor of the block adjoining the tower, has an ornamental fireplace. Private chambers occupied the floors above, and the main bedchambers were in the tower house. There are fine views from the tower, and there were gardens around the castle. 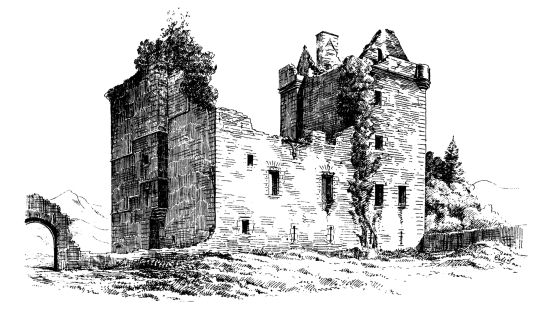 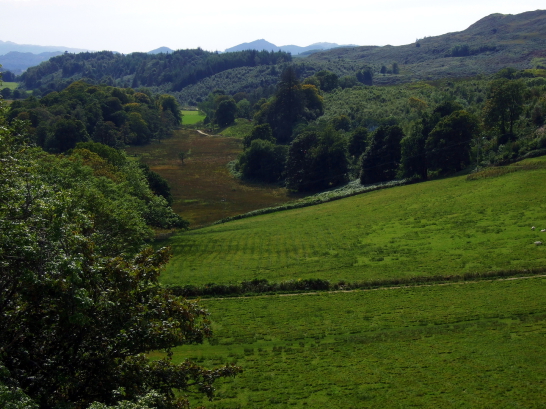 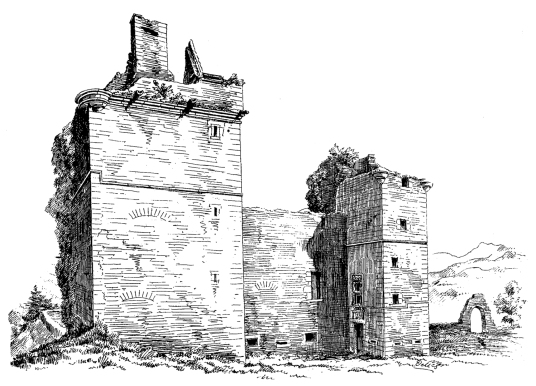 An older stronghold stood on a rocky outcrop just to the north-east of the present castle. The castle is accurately depicted on Pont’s map of mid Argyll, and on Roy’s map of the 1740s/1750s a large formal garden is depicted. 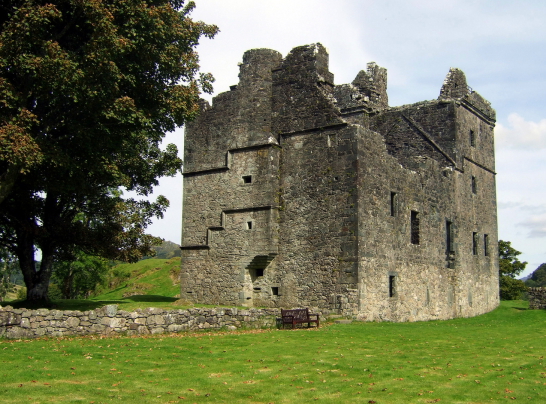 The property was held by the MacLachlans in 1436, then by the Campbell Earl of Argyll, but was given in 1559 to John Carswell, who built the present castle. Carswell published the first ever book in Gaelic in 1567, the Gaelic version of the Book of Common Order. He was Rector of Kilmartin, where he also had a castle (Kilmartin Castle), then Chancellor of the Chapel-Royal at Stirling. He was made Bishop of the Isles in 1566 by Mary, Queen of Scots and had a substantial income. On his death in 1572, he was buried at Ardchattan. 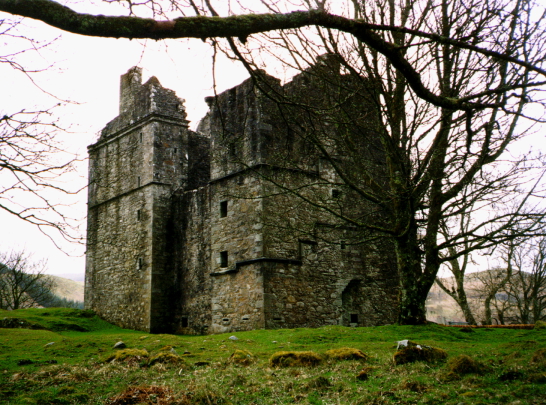 The property passed to the Campbells of Auchenbreck in 1643. John Campbell of Ardkinglas, implicated in the murder of Campbell of Cawdor, was imprisoned and tortured in the castle. 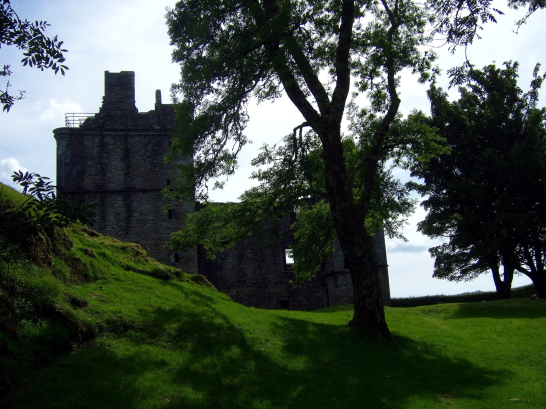 Carnasserie was captured and sacked by the MacLeans and MacLachlans during the Earl of Argyll’s rebellion of 1685. The property was sold to the Malcolms of Poltalloch in the 19th century. The castle was drawn by the artist John Knox (died 1845) and appears to have been partly roofed at the time.(www.nationalgalleries.org).