Lothians: About 1.5 miles south and west of Edinburgh Castle, on minor road west of the A702, in the Merchiston area of Edinburgh, part of Napier University. 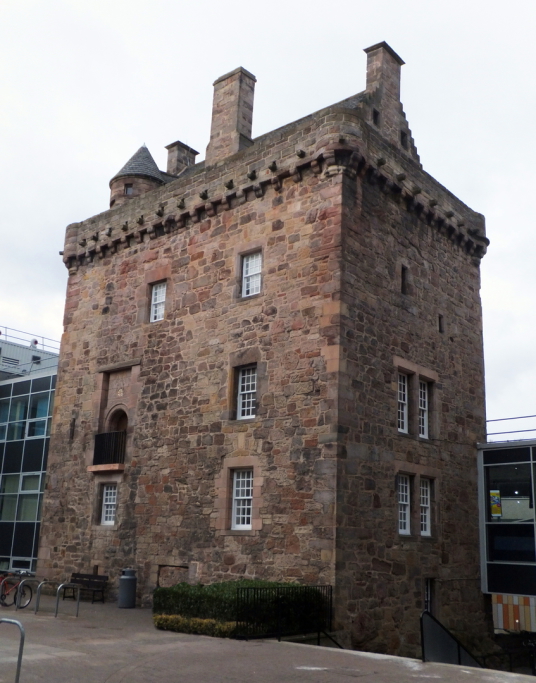 Merchiston Castle is an altered strong 15th-century tower, now L-plan, of four storeys and a gabled attic. A corbelled-out parapet has rounds at each corner, and there is a conical-roofed caphouse.
The basement is vaulted and contains a cellar, reached by a narrow stair, while the ground floor houses the kitchen with a wide fireplace. A turnpike stair, in one corner, climbs to the upper floors. The castle has been altered inside, and later extensions have been demolished. A risque painted ceiling, depicting all manner of wickedness, from Prestongrange House (home to the Royal Muselburgh Golf Club) was installed when the ceiling was thought at the time to be too licentious for a respectable golf club . 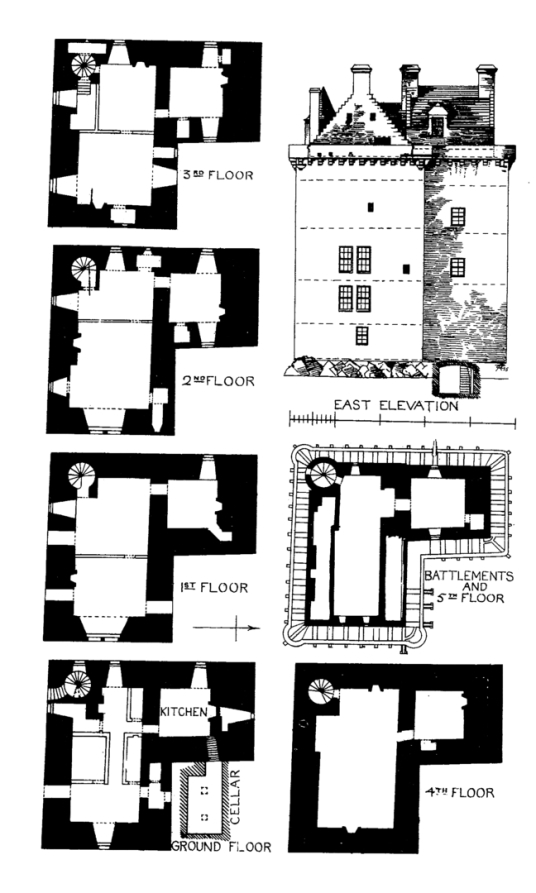 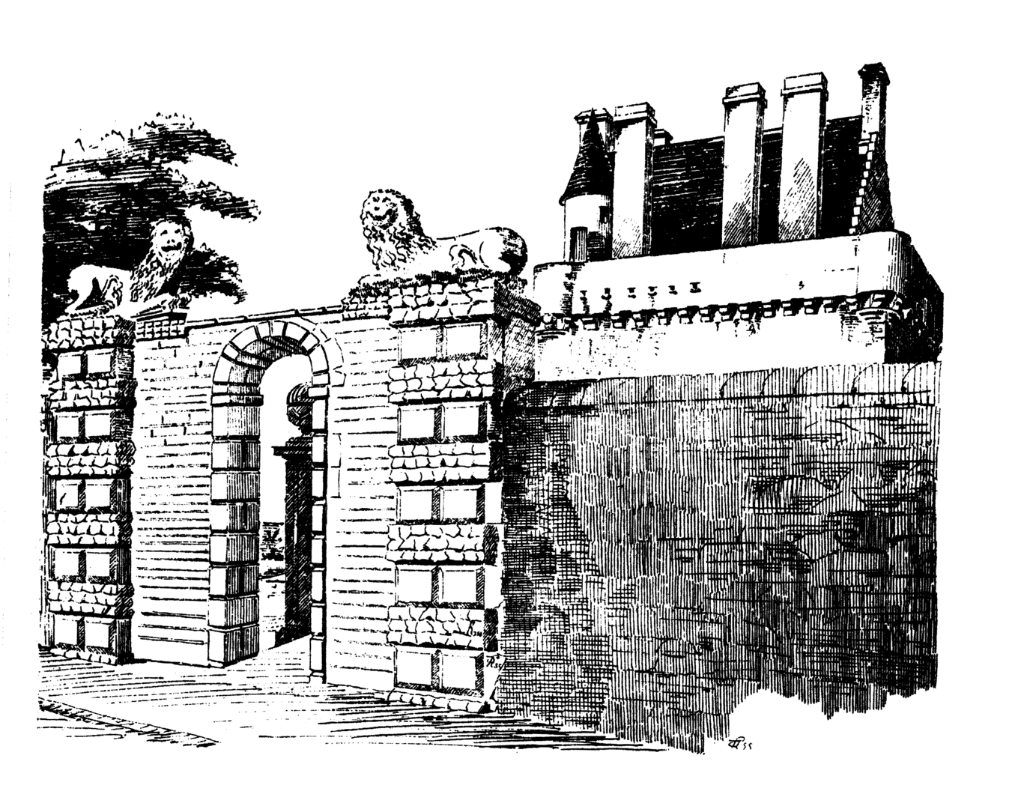 ‘Marchistoun’ is marked on Blaeu’s map of The Lothians, then ‘Merchistoun’ on Adair’s map of Midlothian with a garden and woods. 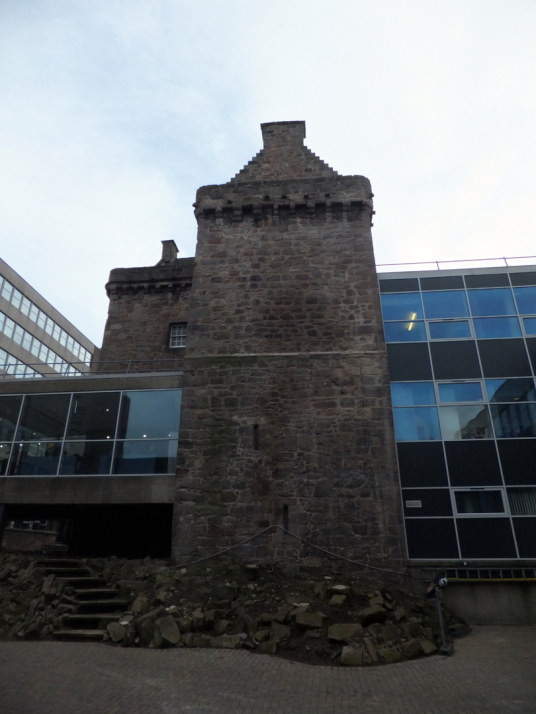 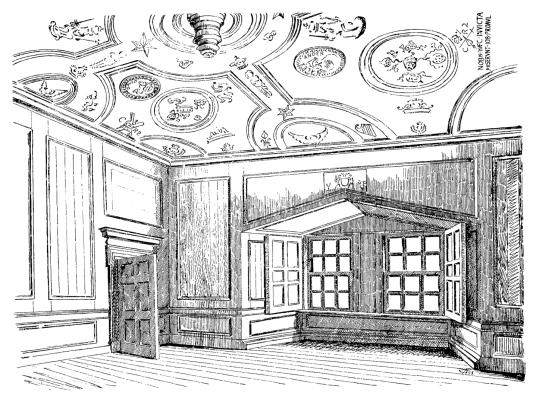 Merchiston was a property of the Craigies in 1367, but passed to the Napiers of Merchiston, three of whom were Lord Provosts of Edinburgh. Sir Alexander was slain at Flodden in 1513, while Alexander Napier of Merchiston was killed at Pinkie in 1547. Mary, Queen of Scots, visited the castle. In 1572 it was besieged by the Regent Morton, who bombarded it from Edinburgh Castle. Sir Archibald Napier refused to surrender the castle to the Regent Mar, and it resisted another siege, although the walls were breached by cannon. 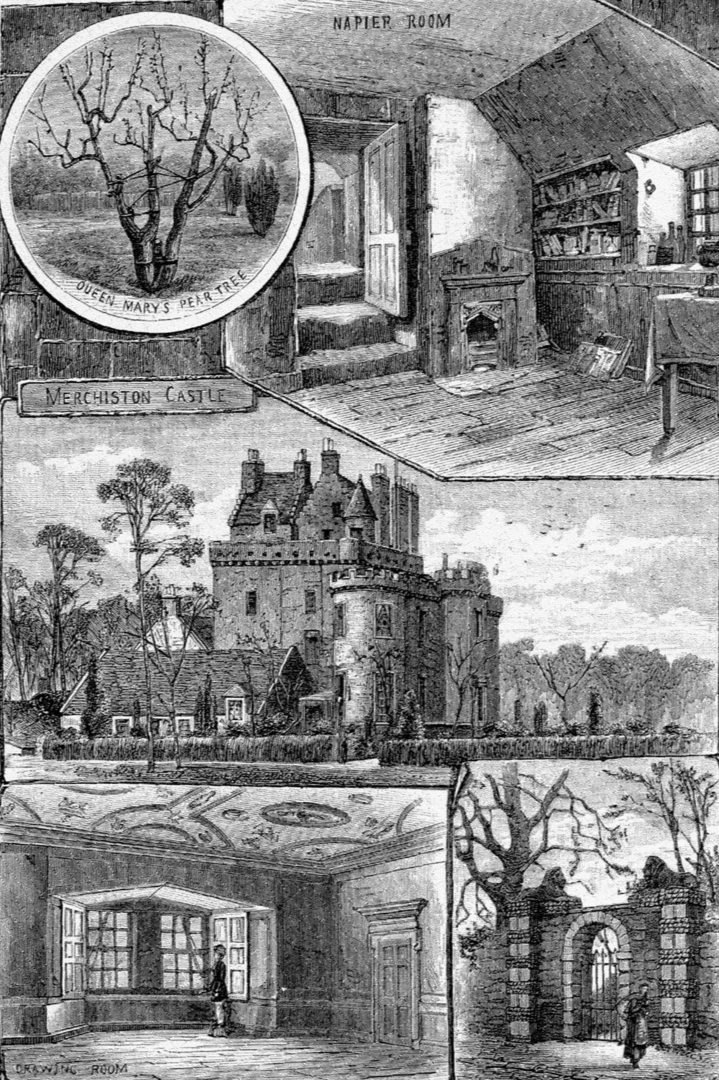 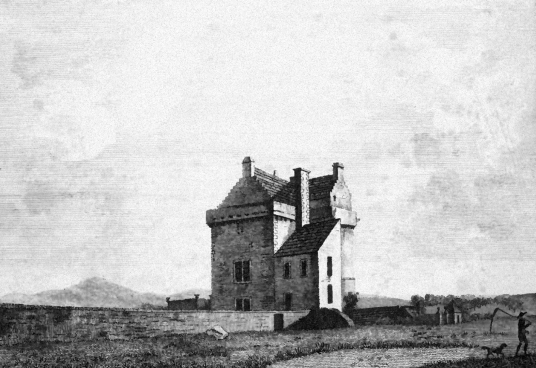 John Napier, the inventor of logarithms, was born at the castle in 1550. Sir Archibald Napier was made a baronet in 1627, and the family were made Lords Napier of Merchistoun. The two titles parted company as the Lordship could pass through the female line, but the baronetcy of Nova Scotia could not; the former passed by marriage to the Scotts, but they took the name Napier. 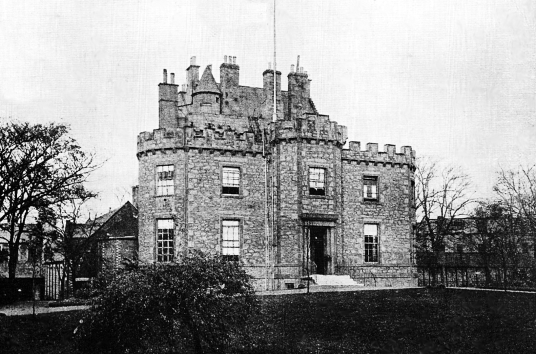 Merchiston Castle: the extensions have been demolished (old postcard) 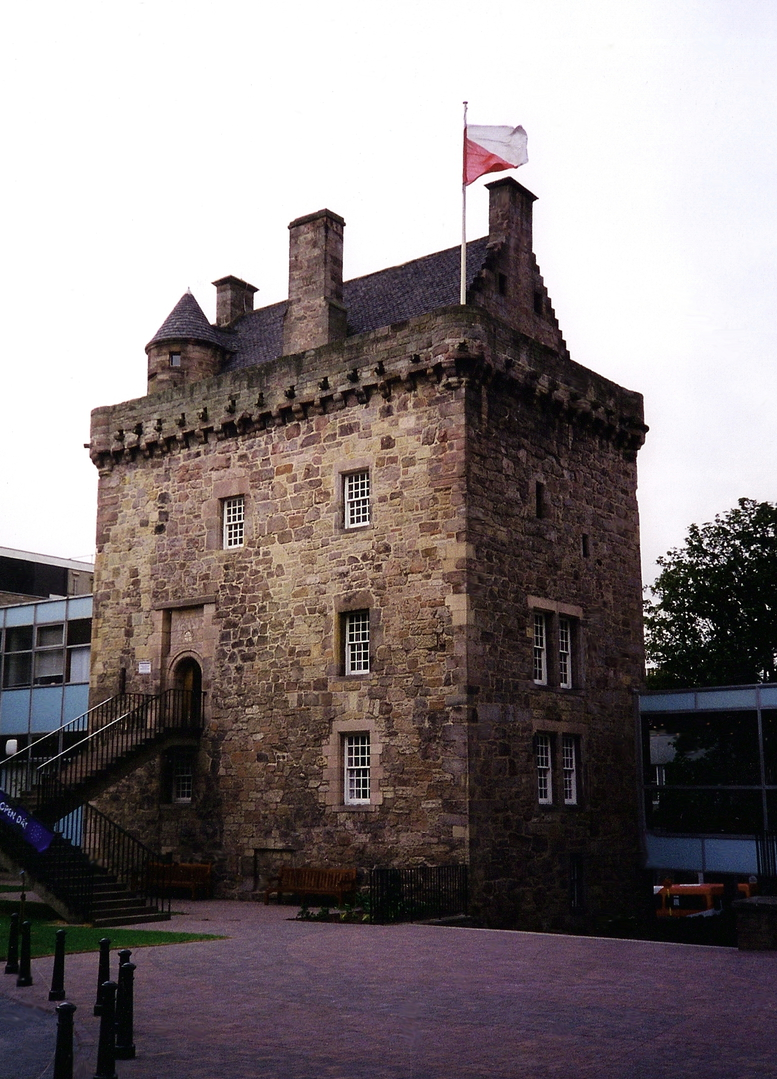 In 1646 Mr John Cant had a ratification which mentions the lands and barony of Merchiston, with the tower, fortalice, manor place etc. The property was sold to the Lowis family in 1668, but they had to sell it in 1728 when they became bankrupt. 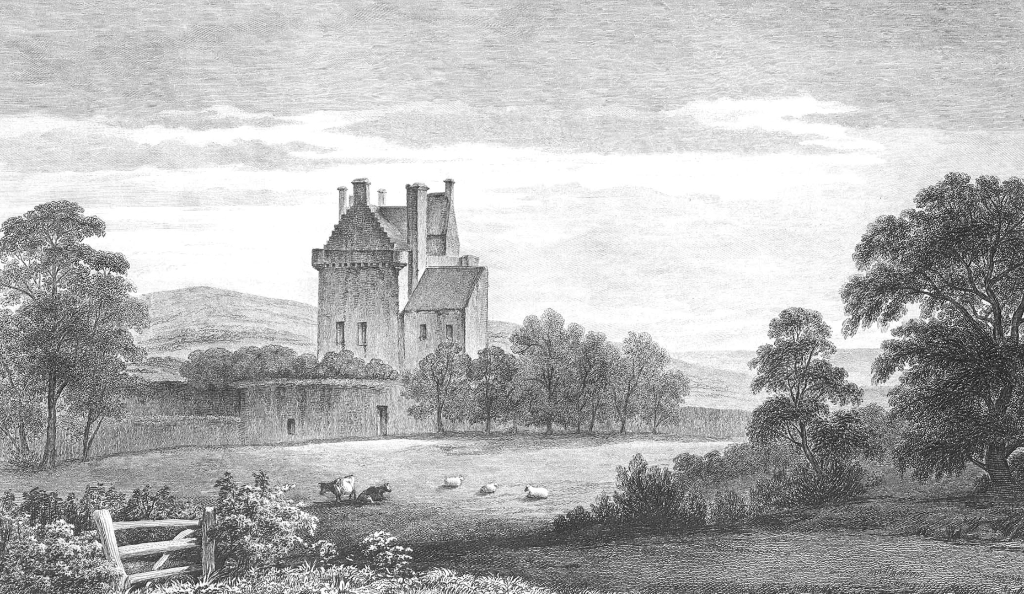 In 1833 the castle was let to Charles Chalmers and a school was founded at Merchiston. In 1914 the property was let to Merchiston Castle School Ltd, but in 1924 the school moved to a new site at Colinton. In 1935 the castle passed to the City of Edinburgh, and was used by the National Fire Service during World War II, although the surrounding 19th-century buildings were then demolished. 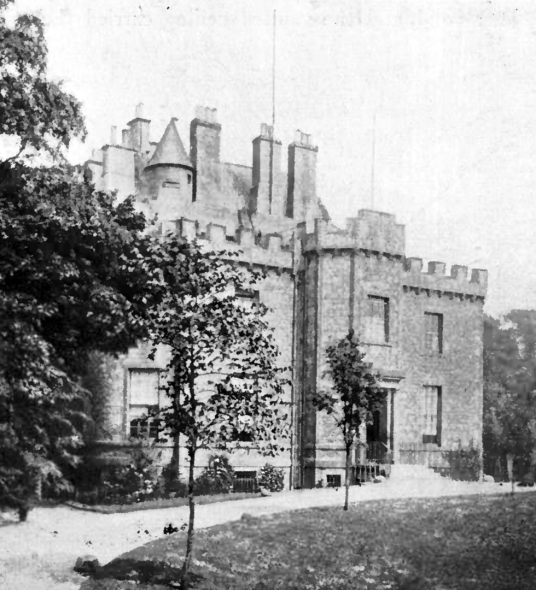 The building became derelict and was threatened with demolition. In 1958 the castle was ‘restored’ and incorporated into Napier Technical College, now Napier University, by slapping a corridor through the wing, the kind of restoration that could only happen in the 1960s. The gate survives to the east of the main university building. 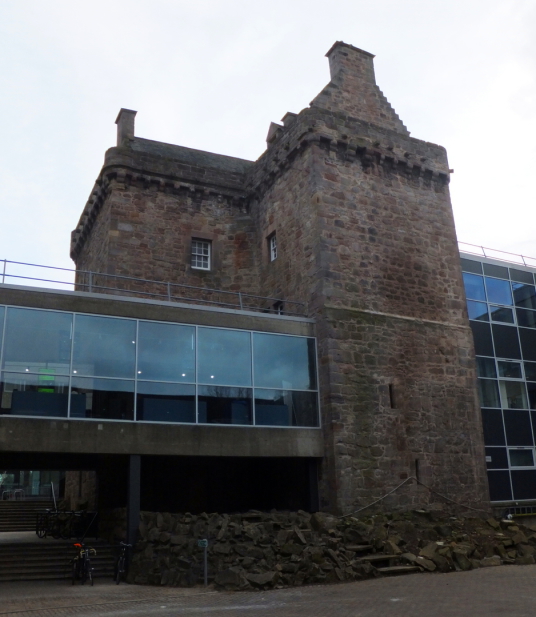