Renfrewshire: About 3 miles east of Port Glasgow, on minor roads south of A8, on south side of River Clyde, at Finlaystone House. 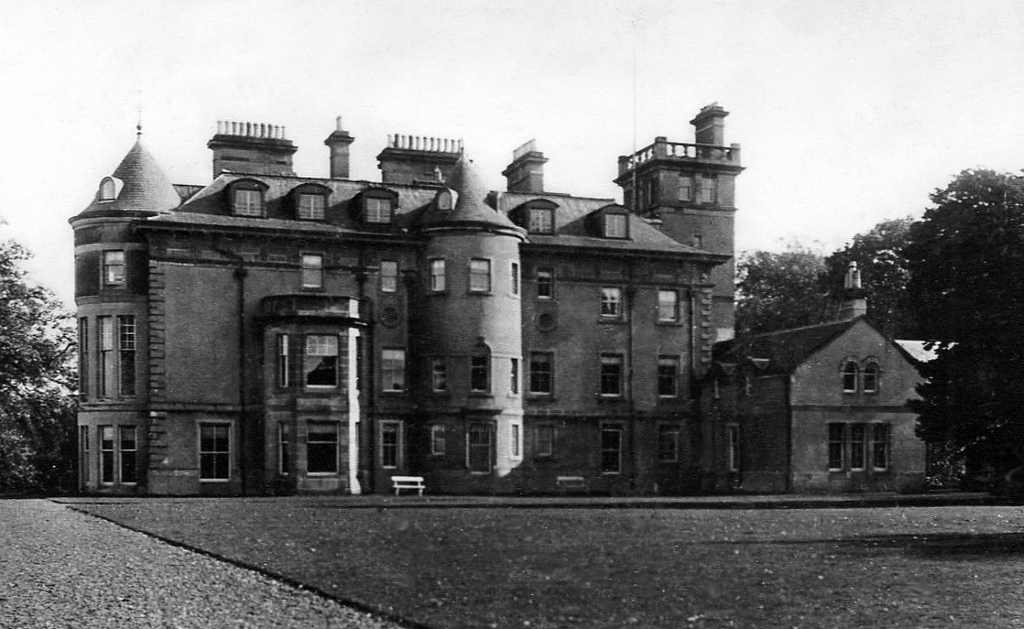 Finlaystone House, a grand symmetrical mansion, mostly dating from 1760 and later, was remodelled between 1898 and 1903. The building incorporates a 15th-century (or earlier) castle, overlooks the Clyde, and is set in 10 acres of fine gardens and grounds.
The place is shown as a sprawling low building with five gables and an arched entrance on Pont’s map of Renfrew, and is also marked on Blaeu.
Finlaystone was a property of the Dennistons in the 12th century, but passed by marriage to the Cunninghams of Kilmaurs in 1404. They were made Earls of Glencairn in 1488, although Alexander, 1st Earl, was slain at the Battle of Sauchieburn the same year. Alexander Cunningham, 5th Earl, supported the Reformation and had John Knox preach here in 1556. He opposed Mary, Queen of Scots, at the Battle of Carberry Hill in 1567.
William Cunningham, 9th Earl, signed the National Covenant, and led a rising against Cromwell for Charles II in 1653, but the rebellion was a failure and he was imprisoned, narrowly escaping execution. After the Restoration he was made Chancellor of Scotland.
Robert Burns – whose patron was James, 14th Earl – also visited the house, and scratched his name on a window pane with his diamond ring. He also wrote a lament for the earl, and called his son James Glencairn Burns.
The earldom became dormant in 1796, and the property passed by marriage to the Cunningham Grahams of Gartmore. It was sold in 1863 because of debt, and later passed to the McMillans.