Cawdor Castle is the magnificent medieval stronghold, built around an ancient hawthorn tree and with a homely but impressive interior, of the Campbells of Cawdor in lovely colourful gardens and expansive grounds near Nairn in the Highlands of Scotland. 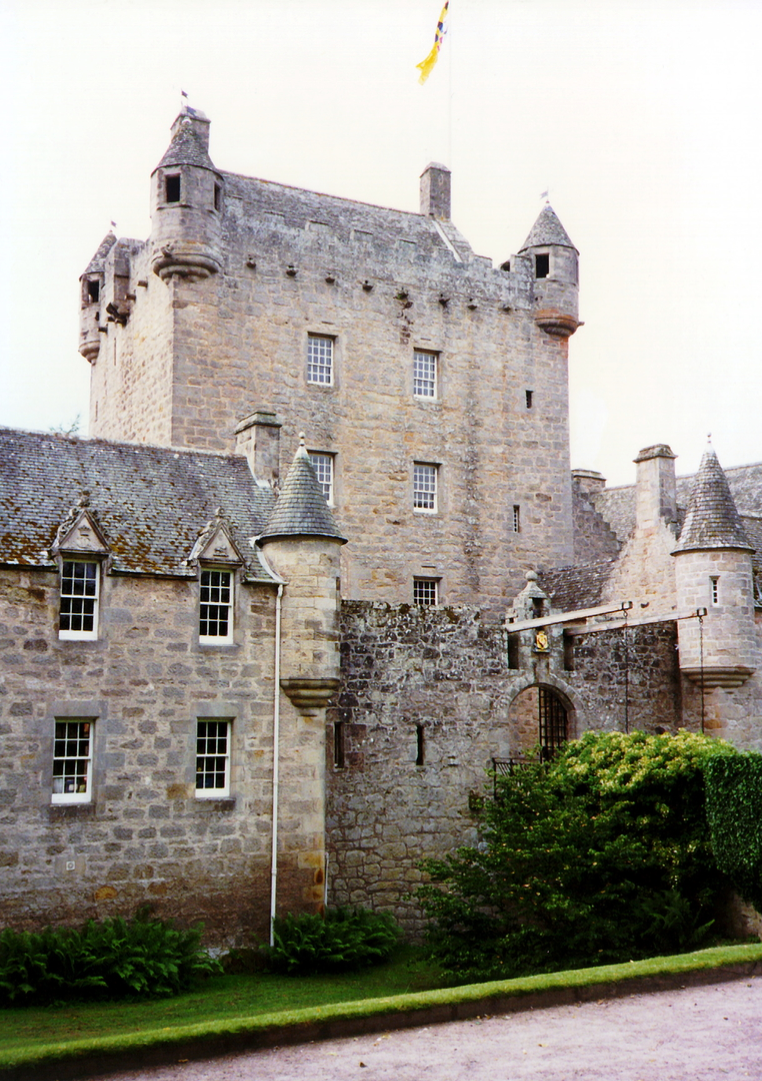 South Highland: About 5 miles south-west of Nairn, on minor roads south of B9090, at Cawdor, just east of Allt Dearg, at Cawdor Castle. 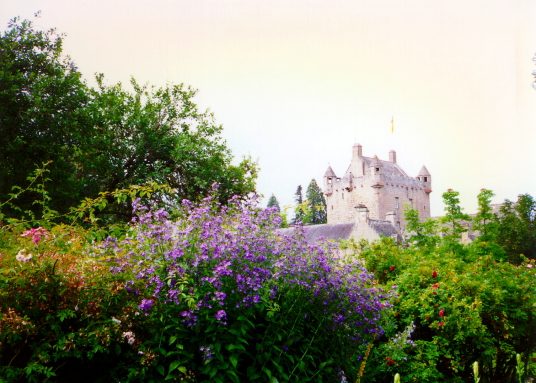 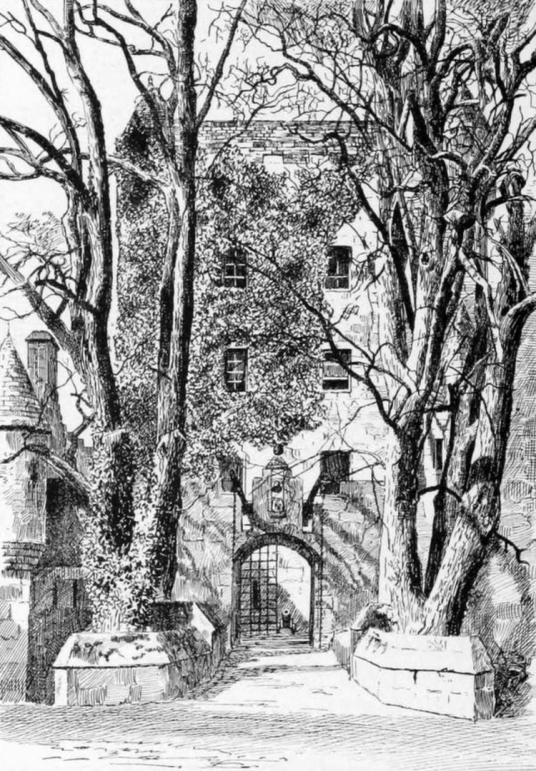 One of the most magnificent and well-preserved strongholds in Scotland, Cawdor Castle incorporates a tall plain tower, dating from the 14th century, although the parapet and upper works were added in 1454. The castle has a deep ditch, and is reached by a drawbridge. Mainly three-storey ranges, gabled and crowned with bartizans and corbelled-out chambers, were built on all sides of the main tower in the 16th and 17th centuries. There is a pit prison. 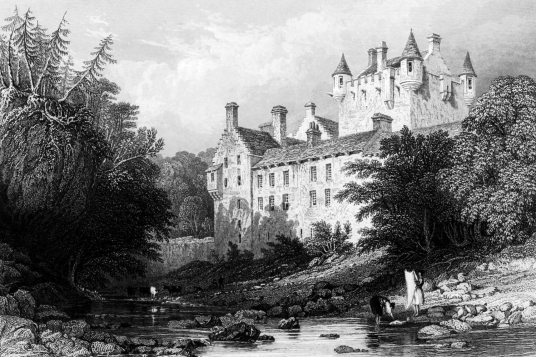 The castle sits in fine gardens and grounds, with a walled garden dating from qbout 1600 and later used as the kitchen garden, a flower garden, and a wild garden, and the estate covers some 42,000 acres. 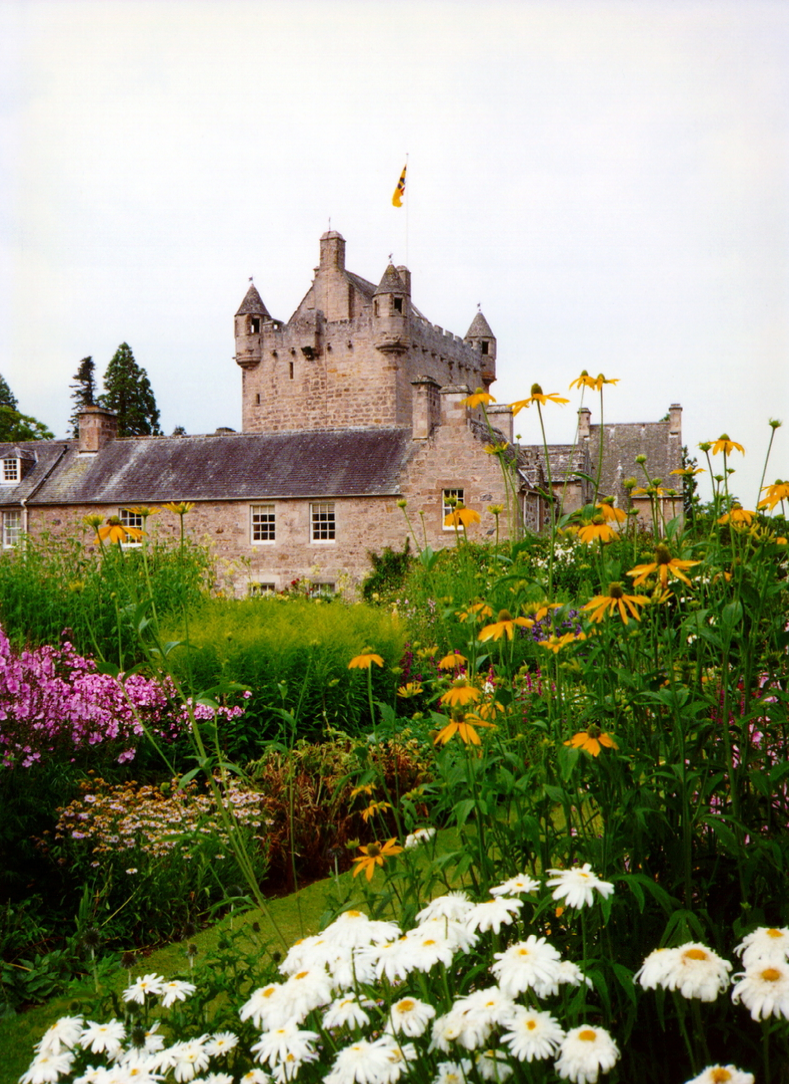 Across the drawbridge defending the entrance is a massive iron yett, which was brought here from Lochindorb Castle after 1455. The main tower rises to four storeys and a garret within a flush parapet, and has very thick walls pierced by small windows. There are bartizans at each of the corners, as well as machicolated projections. 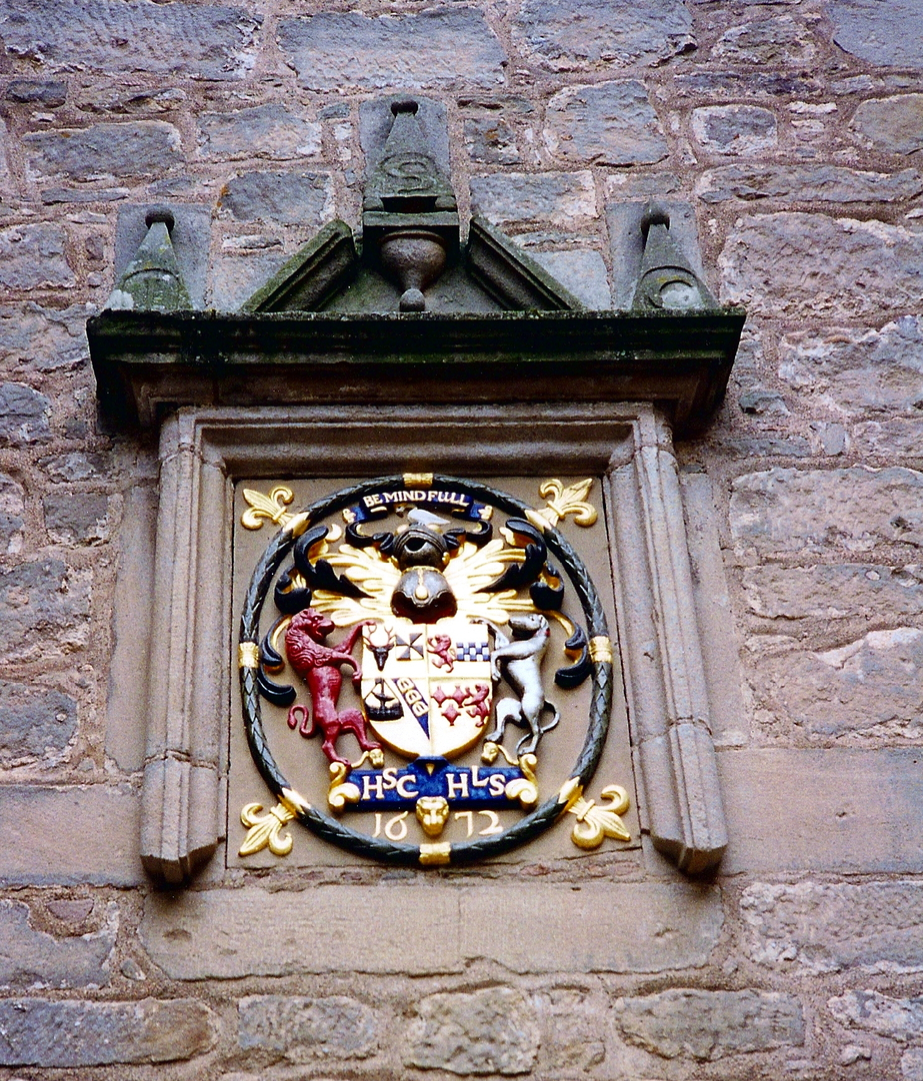 The entrance is now in the basement, but was originally at first-floor level. Both the basement and the third floor are vaulted. A straight stair, in the thickness of one wall, leads up to the hall on the first floor – although this would formerly have been a stair down to the cellars. A turnpike stair climbs to the upper floors. 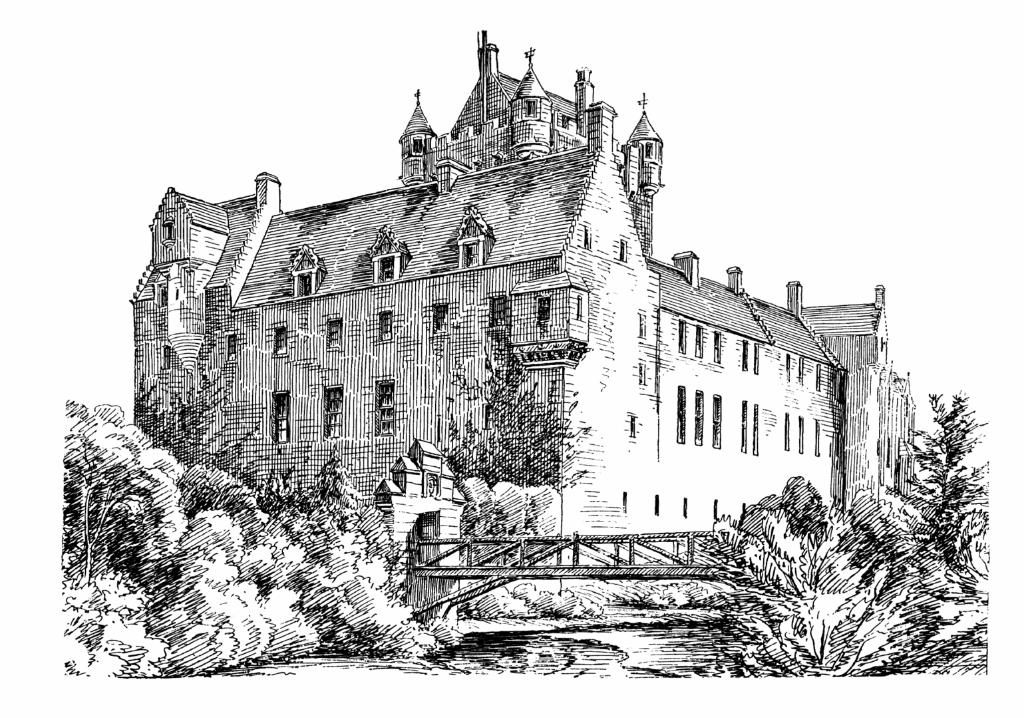 In the later ranges, there is an iron yett postern gate to the moat, some fine 17th-century fireplaces. There are many portraits, fine furnishings and a collection of tapestries. 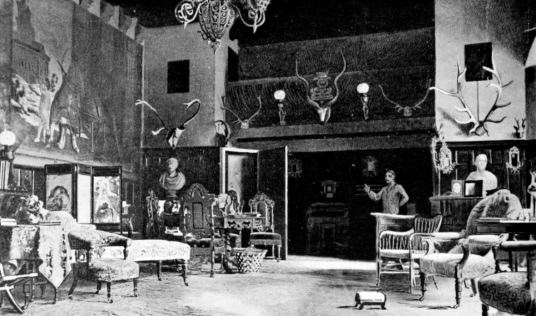 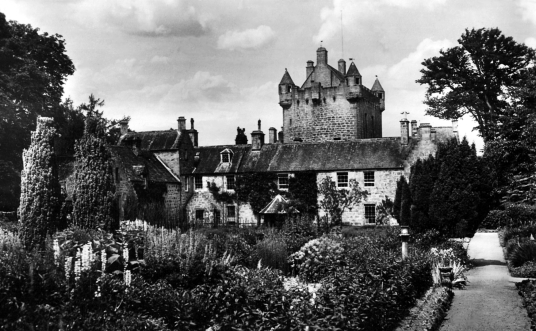 ‘Castle of Caldall’ is marked on Pont’s map of Moray and Nairn, and is depicted as a tall tower of five storeys in a walled courtyard with corner towers or ranges. A large wooded park is shown nearby. Until the early 19th century, the name of the castle and estate was Calder in Scotland, but this was changed to the current spelling by the then laird, who did not reside at the castle. This had come about because of Holinshed's Chronicle of 1577, on which Shakespeare's Macbeth is based, using Cawdor in the text instead of Calder. 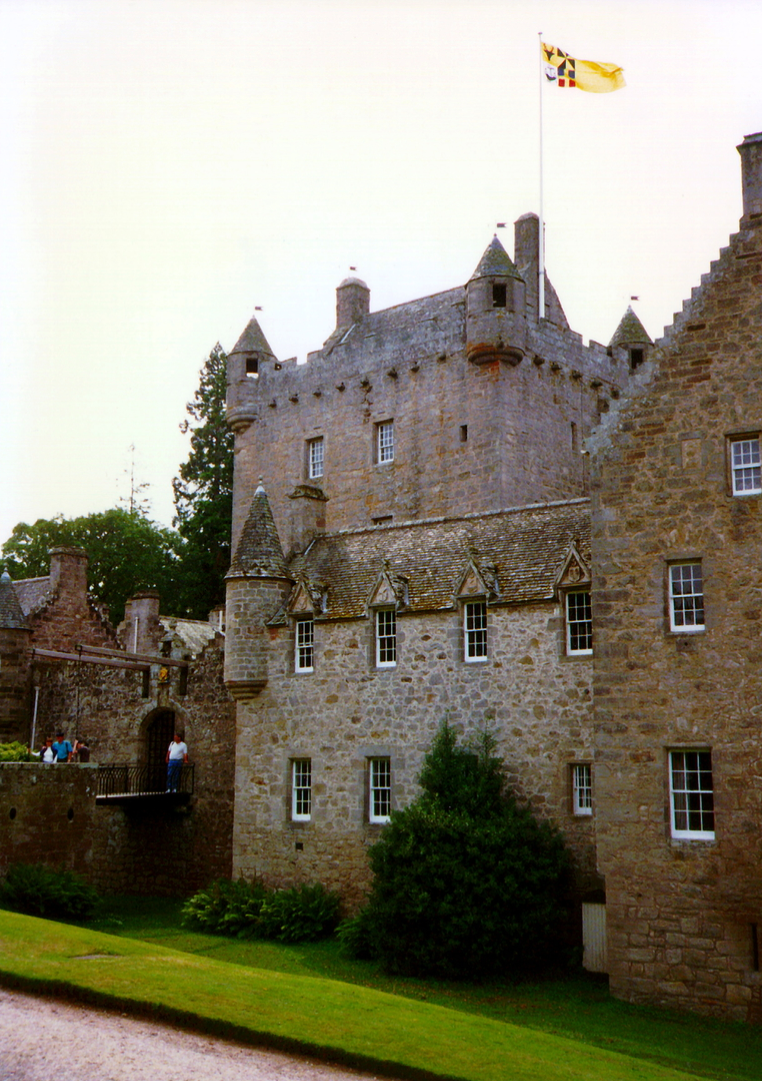 The title Thane of Cawdor is associated with Macbeth, but Duncan was not murdered here, as the castle is not nearly old enough, and he was killed in battle near Spynie. The Calders had an earlier stronghold near here [NH 858512], but nothing remains. 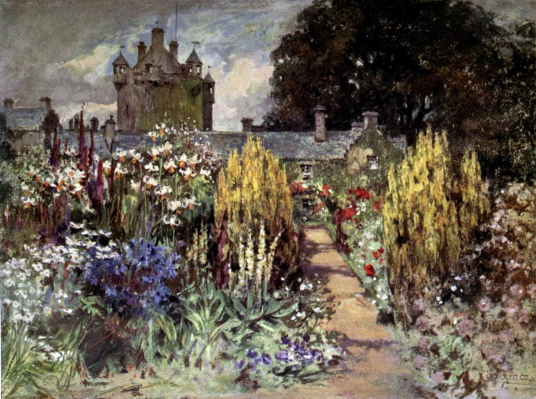 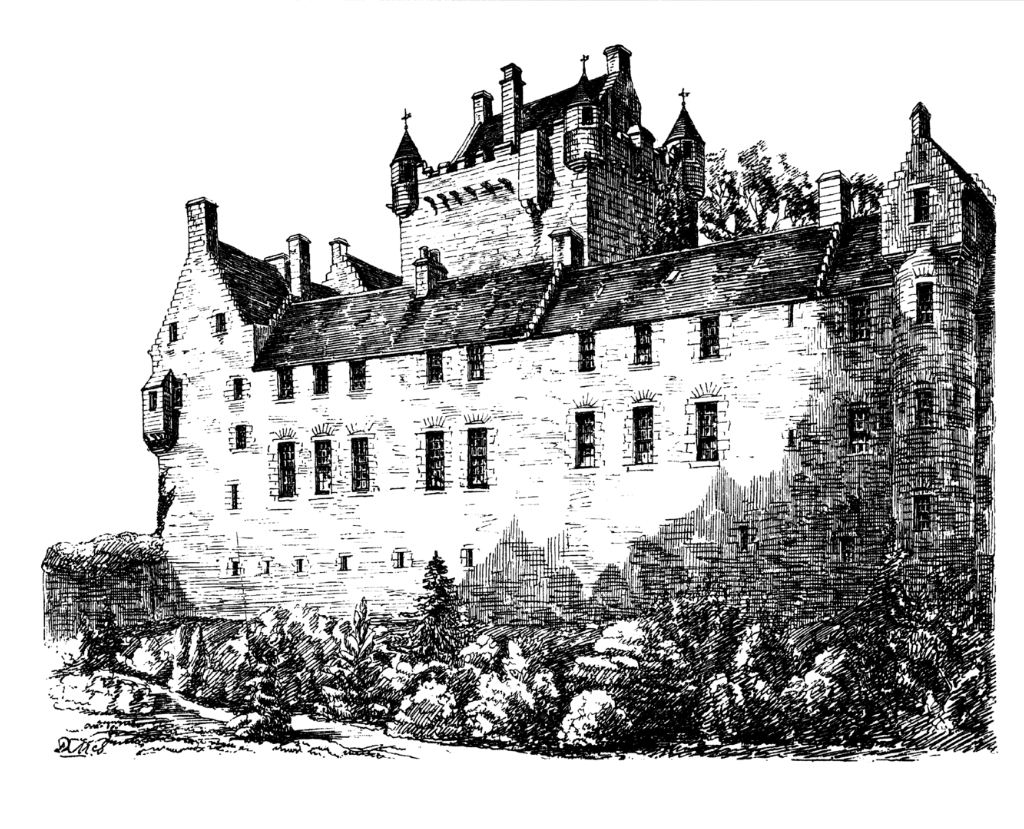 Donald, 1st Thane of Cawdor (or Calder), took the name of Calder when granted the lands by Alexander II in 1236, although one story is that the family were descended from a brother of Macbeth, another that they come from a Norman knight Hugh de Candella. William, 3rd Thane, was murdered by Sir Alexander Rait of nearby Rait Castle. 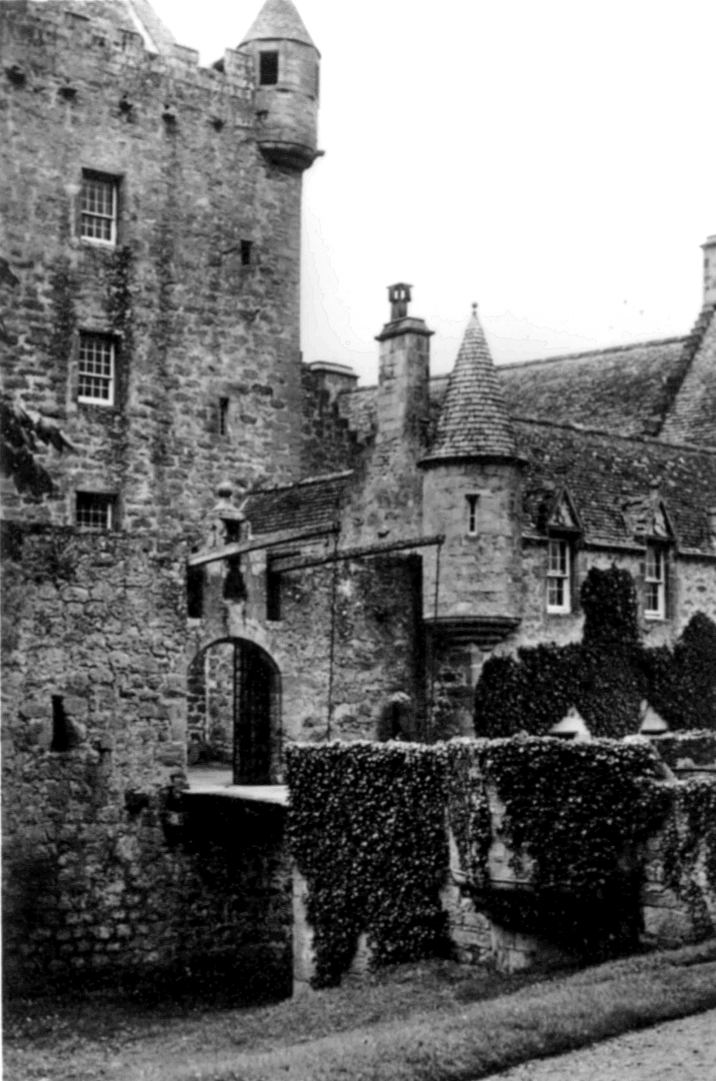 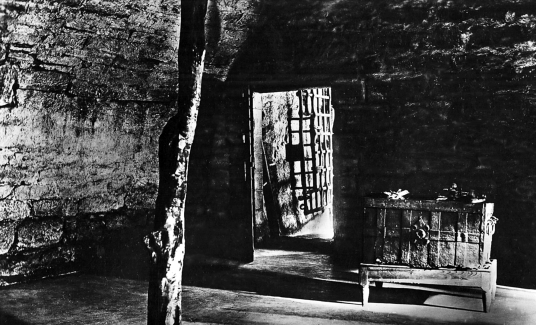 Donald, 5th Thane, built much of the present castle. The method of selecting the site for Cawdor Castle was extremely unusual. A donkey was allowed to rove at will until it came to a suitable spot by a tree. Cawdor is built over a tree, the remains of which are in the vaulted basement. It was believed to be a hawthorn, but in fact it proved to be a holly tree and it died in about 1372, when the castle was built. 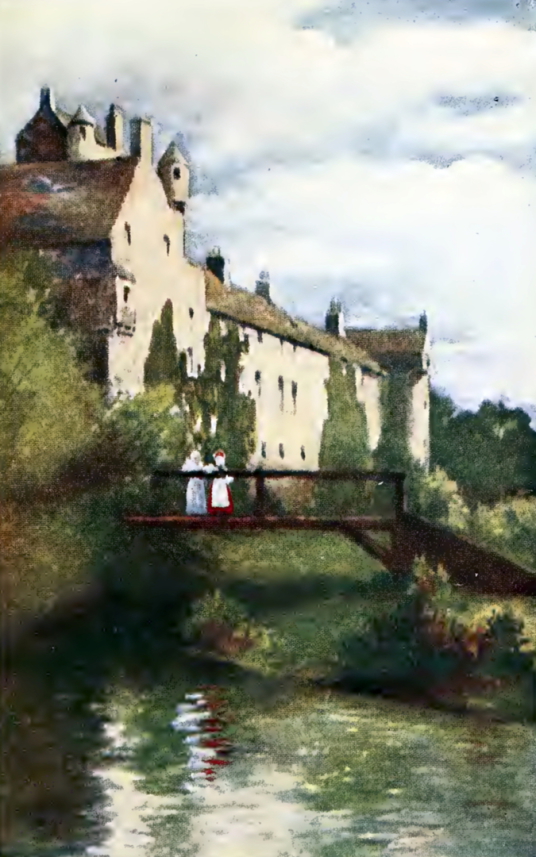 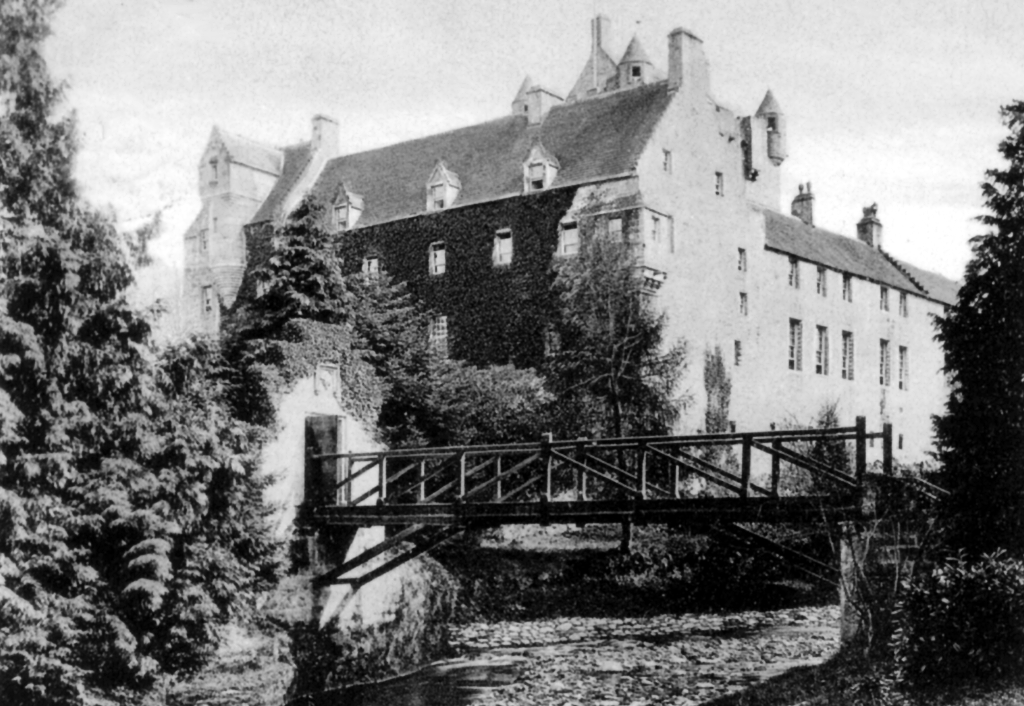 The Campbells obtained Cawdor by kidnapping the girl heiress, Muriel (or Muriella) Calder, and marrying her at the age of 12 to the Earl of Argyll's son, Sir John Campbell, in 1511. The girl is said to have been red or flame haired, leading to the Campbell proverb ‘so long as there is a red-headed lassie on either bank of Loch Awe, Calder will ne're lack an heiress': it's good to be honest about your deceit! Campbell of Inverliver led the kidnapping, and lost all six of his sons. The girl seems to have been happy enough (although see above…) and had many children with Campbell. 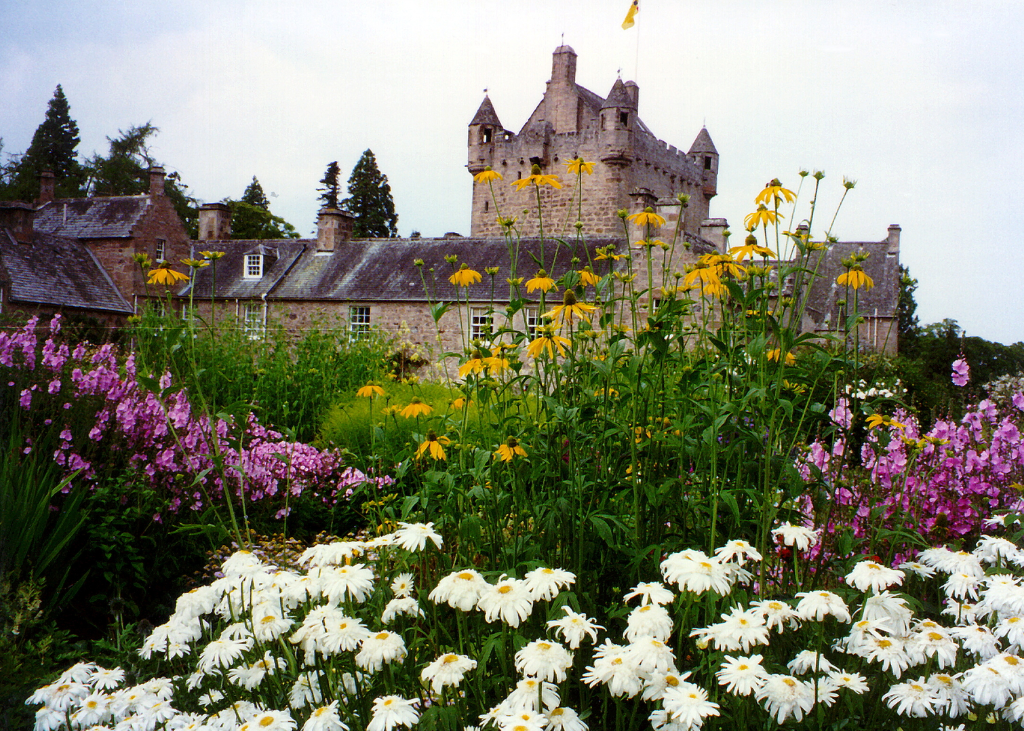 The Campbells of Cawdor, her descendants, remained at the castle.

Lachlan Cattanach, 11th chief of the MacLeans with his castle at Duart on Mull, became so unhappy with his wife, Catherine Campbell, that he had the poor woman chained to a rock in the Firth of Lorn to be drowned at high tide. The lady was rescued, however, by fishermen and returned to her father, Archibald Campbell, 2nd Earl of Argyll. In 1523 MacLean was murdered in his bed in Edinburgh by Sir John Campbell of Cawdor: John was Catherine’s brother. 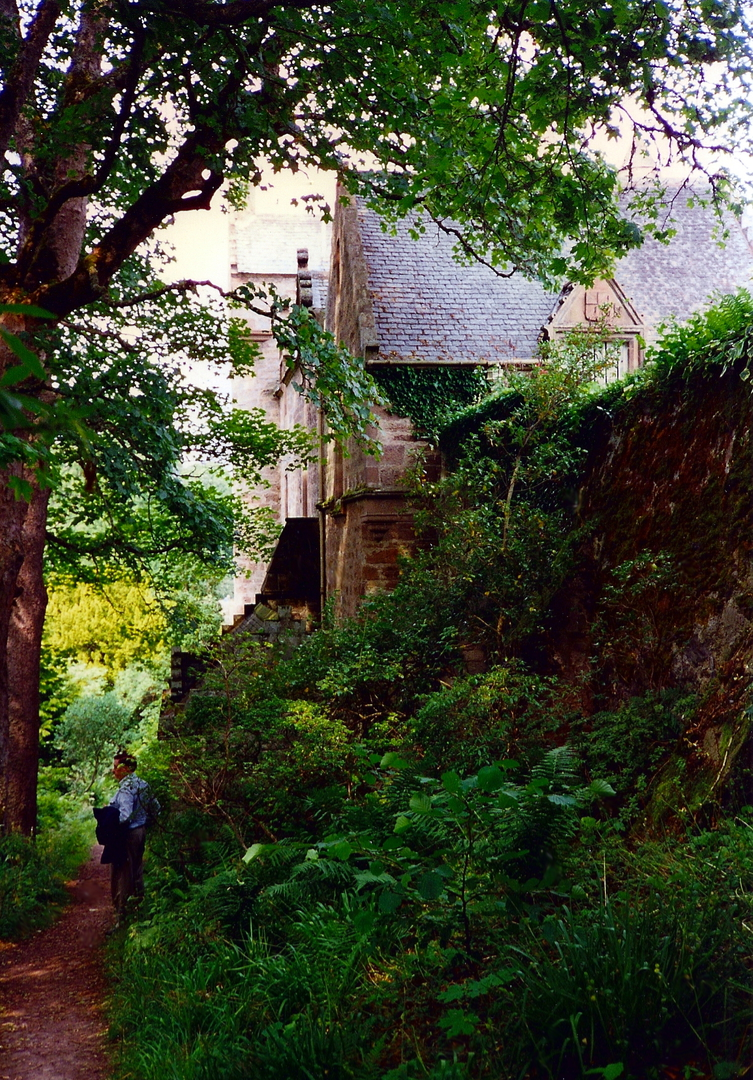 John Campbell of Cawdor was murdered at Knipoch in 1592, having been shot three or four times through a window as he sat by the fire, during a feud between different branches of the Campbells. John Campbell of Ardkinglas was implicated and was imprisoned and tortured in Carnasserie Castle until he confessed to the murder. 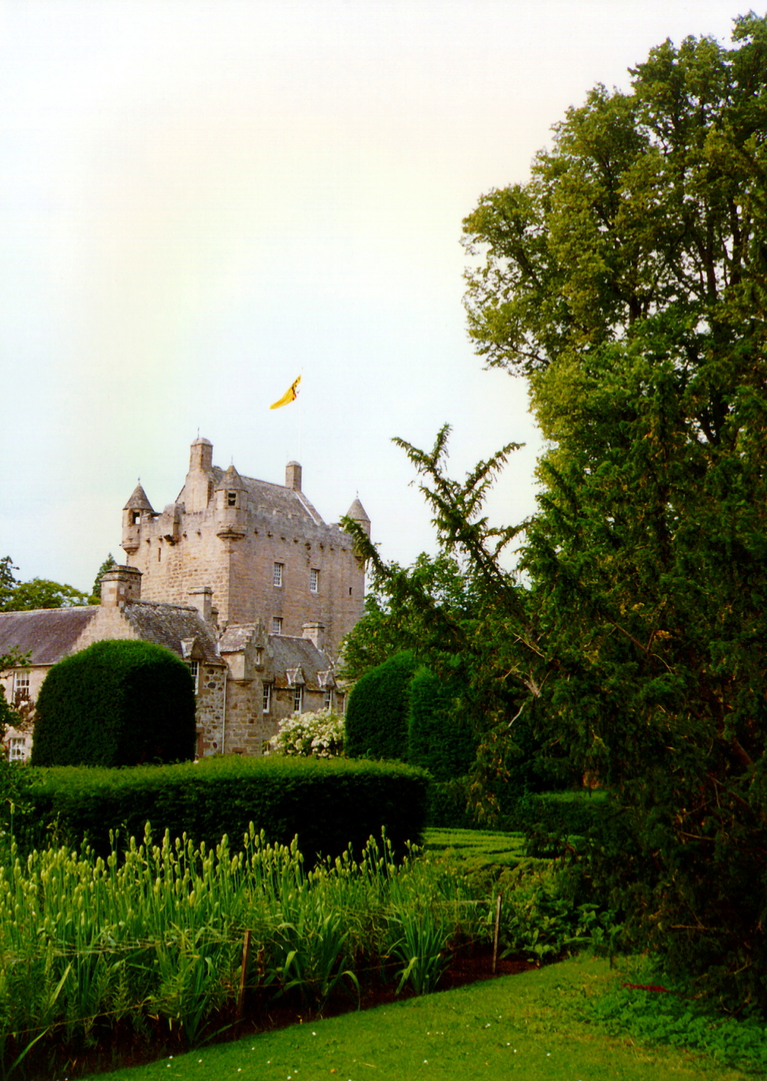 The Campbells of Cawdor gave refuge to Simon Fraser, Lord Lovat, during his flight from Hanoverian troops in 1746 during the Jacobite Rising, and hid him in a secret room in the roof. Fraser was eventually caught and executed. Bonnie Prince Charlie had visited the same year. The family were made Barons Calder in 1796, then Earls Calder in 1829, and they still own the castle.

A ghost in a blue velvet dress has reputedly been seen here, as has an apparition of John Campbell, 1st Lord Cawdor. 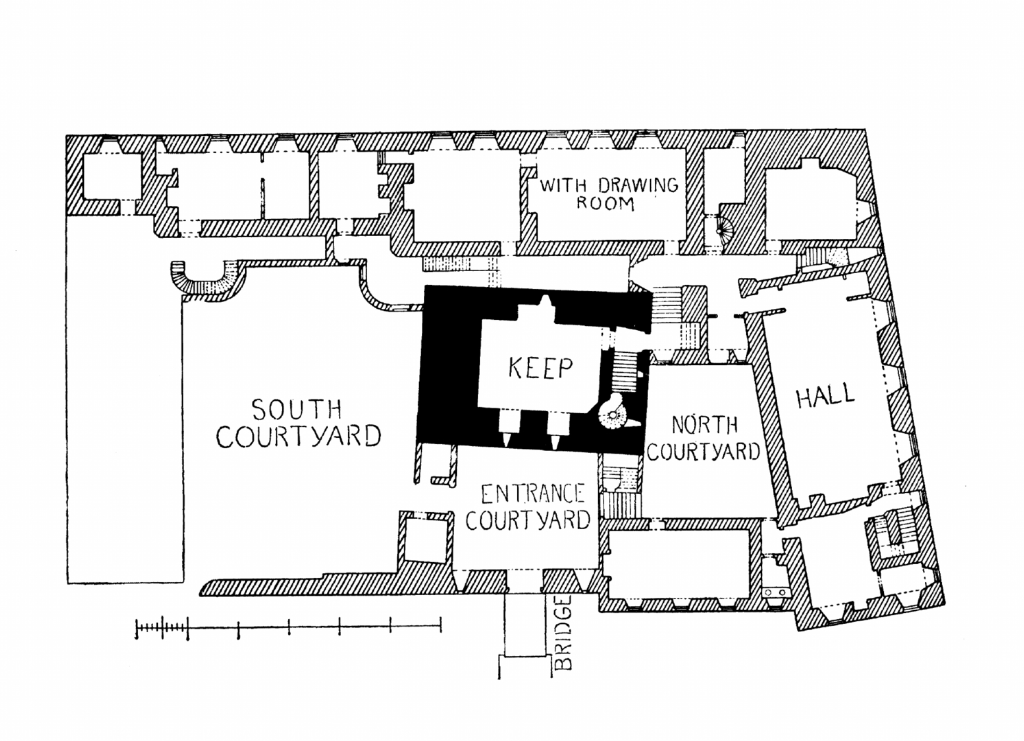 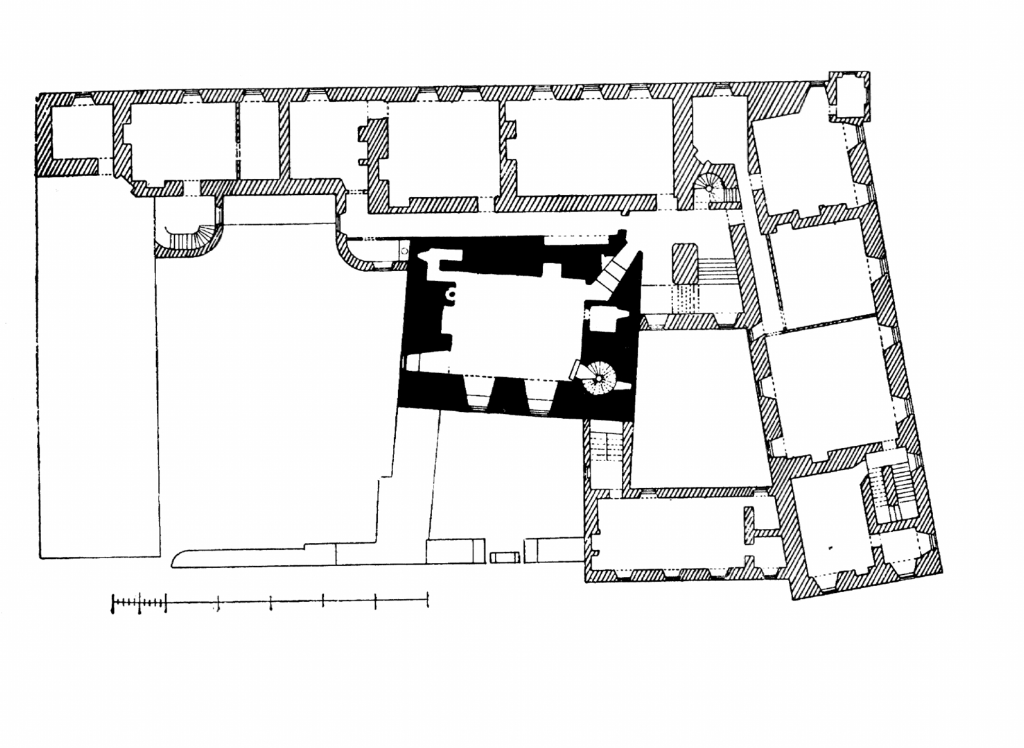