Sutherland & Caithness: About 4 miles west of Dornoch, on minor roads south of A9, north of Loch Ospisdale, 1.5 miles east of Ospisdale, at Skibo Castle. 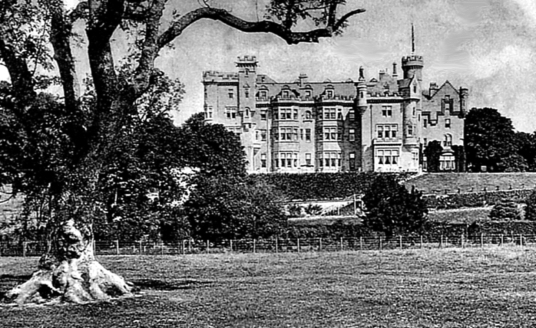 Site of castle, which was mentioned around the beginning of the 13th century. The present Skibo Castle is a massive 19th-century rambling castellated mansion, rising to four and five storeys. It was built in 1900 and designed by Ross Macbeth, and then extended in 1899-1901. The present building probably incorporates some or most of the old castle. The building has a full flourish of towers and turrets, battlements, corbiestepped gables and stone mullioned and transomed windows. The gardens and terrace were designed by Thomas Mawson in 1904, and the house sits in a 7,500-acre estate. 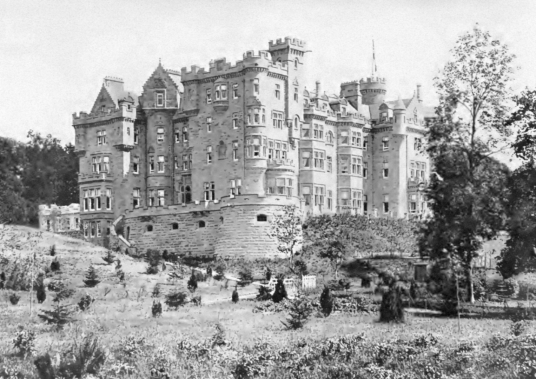 ‘Skibo’ is prominently marked on Blaeu‘s map of Sutherland.
The castle was a property of the Bishops of Caithness until 1565. It had been captured in 1544 by the Mackays, and passed to the Grays soon afterwards. In 1567 George Sinclair, 4th Earl of Caithness, had Dornoch burnt and the castle there besieged to secure possession of Alexander, the young Earl of Sutherland (whose parents had been poisoned at Helmsdale Castle), although he is also said to have been abducted from Skibo.

Robert Gray of Skibo is on record in the 1640s. The Marquis of Montrose was imprisoned here after being betrayed at Ardvreck Castle. Robert Gray was fined after his wife, Jean Seton, hit one of Montrose’s guards with a leg of meat.
The property passed in 1776 to the Dowalls, then in 1786 to the Dempsters of Dunnichen. The building was remodelled for the Sutherland family in 1872, but was purchased by Andrew Carnegie in 1895.
Carnegie was born in Dunfermline in 1835 but emigrated to America in 1848, and made a fortune through railways, and iron and steel. He was one of the richest men of his time and, although a ruthless businessman, he gave away most of his money, Dunfermline particularly benefiting. He had the building remodelled.
The castle is now an exclusive country club.
The old castle was reputedly haunted by the ghost of a young woman. She was a village girl, who was entertained here by a servant of the castle, but was afterwards never seen again. She was probably murdered, and the ghost of a partially dressed young woman has reportedly been seen in the castle. A skeleton was later found sealed behind a wall in the castle and, when it was buried, the hauntings stopped.