Borders: In Galashiels, on minor road from A7, on south side of Buckholm Hill, near Ladhope Tower, on Scott Crescent, at Old Gala House. 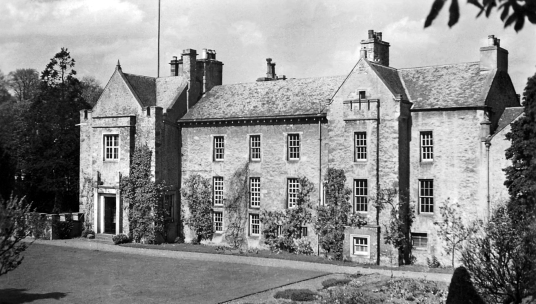 Old Gala, a rambling mansion, incorporates an altered 16th-century tower house at one end, and an extended T-plan building of 1611 in the middle. There is a painted ceiling, dating from 1635, and a fine garden with the SIMBA tree of tranquility, a fountain and a waterfall.

‘Galasheels’ is marked on Blaeu’s map of Tweeddale. 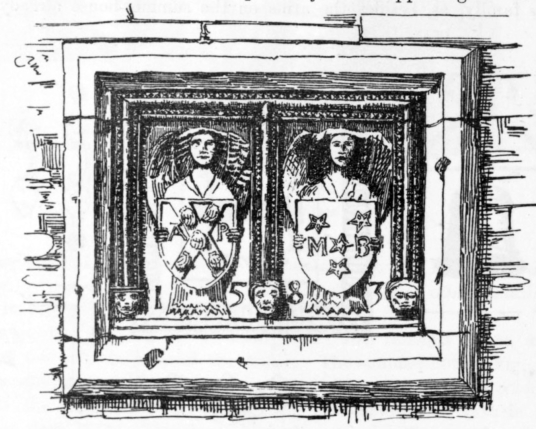 The heraldic panel, dated 1583, was located in the wall of the oldest part of Old Gala House. It was removed when the house was abandoned, and reset into the wall of the lodge, at one of the entrances to the new mansion house of Gala. The arms and initials on the shields are those of Andrew Pringle and his wife Marion Borthwick, daughter of John, fifth Lord Borthwick.

The fireplace lintel (below) had been plastered over, and was discovered during alterations. The arms and initials are those of Sir James Pringle, who was knighted by James VI, and Jean Ker of Linton, his wife.

Old Gala may stand on the site of a 15th-century castle of the Douglases, which was destroyed (or attacked anyway) in 1544. The property was given to the Pringles of Gala, who held the property from 1408, and David Pringle of Galashiels and four of his sons were killed at the Battle of Flodden in 1513. Sir James Pringle of Gala was the laird in the 17th centuty (see below), but he got into financial difficulties and he moved to Smailholm Tower.

The property went to the Scotts in 1632, and the following year James Scott of Galashiels had a ratification which mentions the tower, fortalice, mansion, manor place, etc.

A new Gala House was built in 1872 for the Scotts and designed by David Bruce, but this was demolished in 1985. From 1949 Old Gala House was used by Galashiels Arts Club, but passed to the local council. The Scotts of Gala still flourish, and are recorded as having residences near Gala and in London.
The building is now used as a community and art centre, and there is a museum with displays about the occupants of the house, Galashiels, the textile industry and the ‘Braw Lads Gathering’, as well as a permanent exhibition on the locally born sculptor Thomas Clapperton.

Old Gala House, the place of another branch of Pringles, stands deserted also, in favour of a spick-and-span example of the so-called Scottish baronial style. The old house stands on the site of one still older, which bore a stone with the date 1583, displaying the arms of Pringle the five pilgrim's scallops on a black saltire with the cinquefoils of Borthwick, being the scutcheons of Andrew Pringle and Marion Borthwick his wife. Andrew's grandson, David, married Margaret, daughter of Auld Wat of Harden and Mary Scott, the Flower of Yarrow. They had no children, but David's sister Jean, having married Margaret Scott's brother Hugh, became heiress to her father, and that is the origin of the Scotts of Gala. A richer admixture of ancient Border blood could scarcely be contrived. Hugh's and Jean's arms are carved upon the same shield over the entrance to the family mausoleum in Galashiels kirkyard, with the date 1636.

Our journall into Scotland anno Domini 1629, 5th of November, from Lowther by C. Lowther (visit to Old Gala House, published in 1894)

From ………… to Gallowsheilds, 2 miles, to which place is excellent good ground, and to Sir James Pringle his house did we go and there were we wondrous courteously entertained, he is one of the best husbands in the country as appeareth by his planting and suffering his tenants to hold on him by planting 6 fruit trees or 12 other trees, and if they fail, to pay for every tree not planted Ad, he also finding two fallers mills and two corn mills. The town is a borough-barony, he himself is the sheriff of Ettrick and hath been these three years together, he is also a commissioner in the same sheriffdom, of which there be divers in all the sheriffdoms of Scotland, they being of the nature of our justices of assize in their circuits, above justices of peace; he is also a convener of justice, a justice of peace, he is a great man in his country. There are of the Pringles for some 8 miles up Gallowater, gentlemen all of pretty seats and buildings. On the Sunday as soon as we came to the town we alighted and went to the church to him, he took us into his own seat, the one of the one side of him, and the other of the other side, we heard a good sermon the fore and afternoon, there was the finest seats I have anywhere seen, and the orderliest church/ Beside him is the Meageld hill, which word Meageld was a watch word to gather those of a company when they were dispersed in war. He hath a very pretty park, with many natural walks in it, artificial ponds and arbours now a making, he hath neat gardens and orchards, and all his tenants through his care, he hath abundance of cherry trees, bearing a black cherry, some of which I see to be about 30 yards high and a fathom thick (sic), great store of sycamores, trees he calleth silk trees, and fir trees. He gave very great respect, and said he heard of my father's fame. I see there the finest gun I ever beheld which was the King of Spain's. In Scotland the wives alter not their surnames. They served up the dinner and supper with their hats on before their master, each dish covered with another, then was there a bason withheld for to wash our hands before we sat down, then being seated Sir James said grace. Their cheer was big pottage, long kale, bowe or white kale, which is cabbage, breoh sopps (?), powdered beef, roast and boiled mutton, a venison pie in the form of an egg, goose, then cheese, a great company of little bits laid on a pewter platter, and cheese also uncut, then apples, then the table-cloth taken off and a towel the whole breadth of the table and half the length of it, a bason and ewer to wash, then a green carpet laid on, then one cup of beer set on the carpet, then a little long lawn serviter, plaited up a shilling or little more broad, laid cross over the corner of the table and a glass of hot water set down also on the table, then be there three boys to say grace, the 1st the thanks-giving, the 2nd the pater noster, the 3rd a prayer for a blessing to God's church, the good-man of the house, his parents, kinsfolk, and the whole company, they then do drink hot waters, so at supper, when to bed, the collation which [is] a doupe of ale; and also in the morn and at other times when a man desireth to drink one gives them first beer holding him the narrow serviter to dry his mouth with, and a wheat loaf and a knife, and when one hath drunk he cutteth him a little bread in observance of the old rule, Incipe cum liquido sicca Jinire memento. When we came away in the morn having walked abroad into park, gardens, and other places, and having very well with rost &c. {sic) Sir James set us 2 miles, and his 2nd, his eldest son better than 4, and writ us letters to Edinburgh. The Pringles glory in that they were never but on the King's part in all the troublesome times, and they therefore of the states were envied, for they never 'lowped' out with any of the lords nor were attainted.