Moy Castle, a stark old ruinous tower in a fantastic scenic location by the sea, long a property of the MacLaines, at Lochbuie, on the south coast of the Hebridean island of Mull. 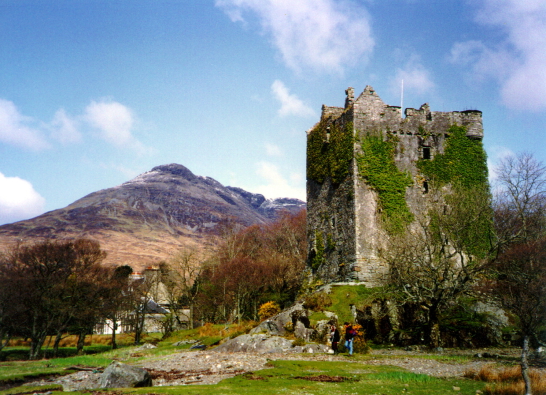 Argyll & Dunbartonshire: About 10 miles south-west of Craignure, on island of Mull, on minor road and foot 6 miles south of A849 at Strathcoil, along beach, east of Lochbuie House, at Moy Castle. 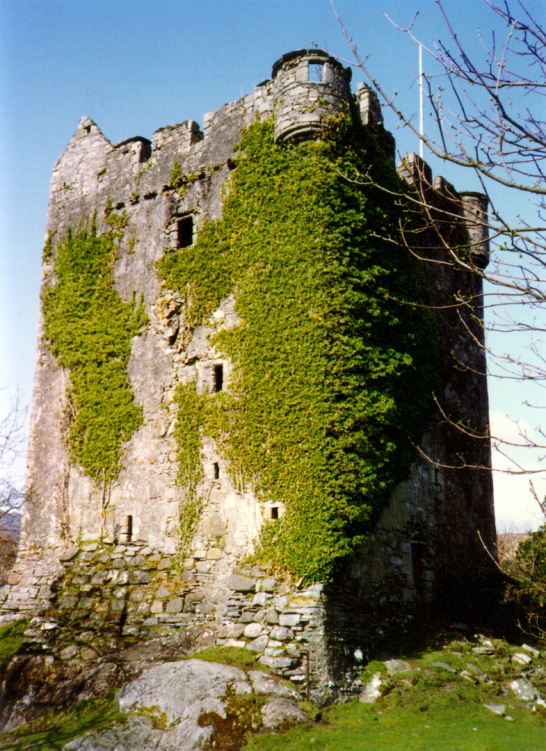 In a beautiful situation on a rocky crag by the seashore, Moy Castle is a ruinous plain 15th-century tower of three storeys and a gabled garret, remaining entire to the wallhead. It has a flush crenellated parapet. Open rounds, which were once roofed over, crown two of the corners, while a caphouse for the stair and a gabled watch-chamber crown the others. The few windows are small. 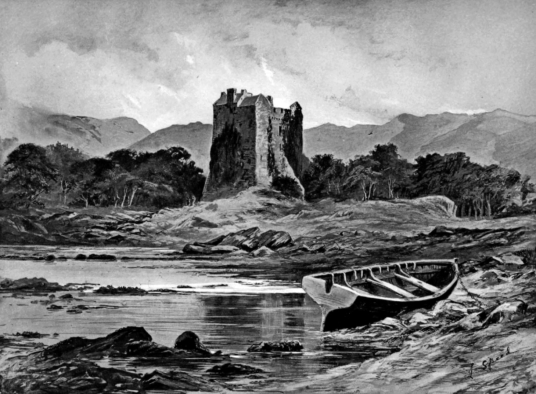 The entrance leads to the vaulted basement, which has a well in the floor. The hall would have been on the first floor, with private chambers above. The tower was harled, and a landing place survives, just beside the castle. Part of the beach appears to have been cleared for a slipway. 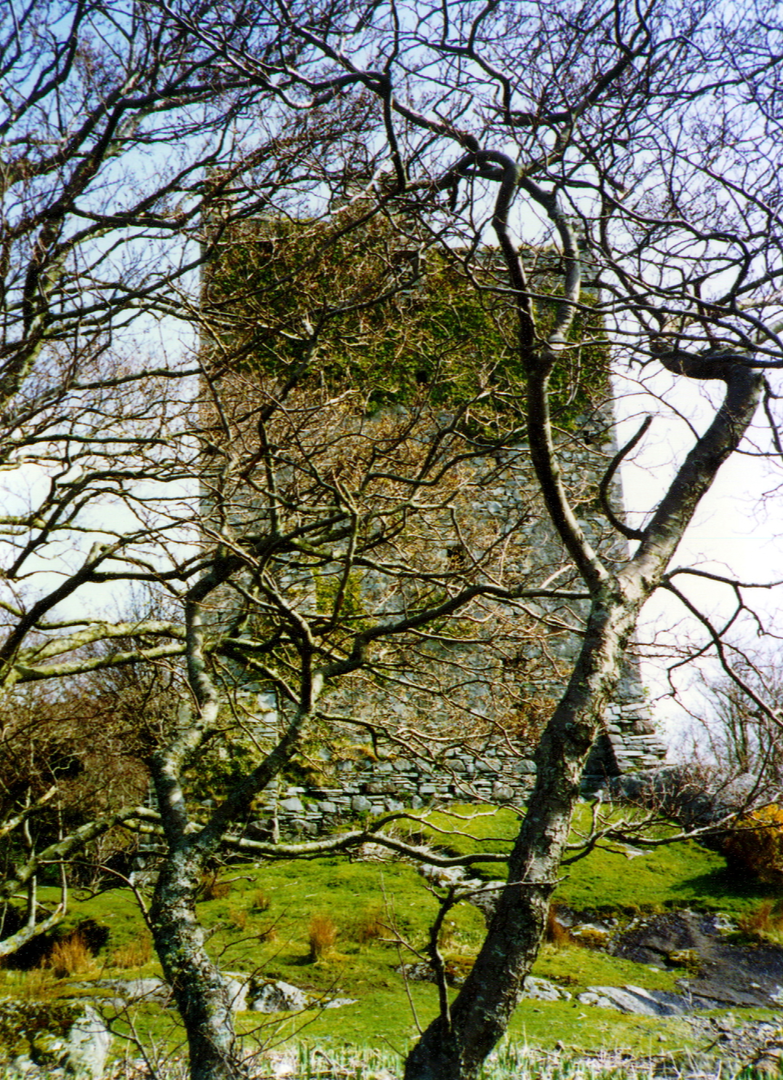 ‘Castel Loch-buy’ is marked on Blaeu’s map of Mull.
The MacLaines owned the property, an unruly branch of the MacLeans, after acquiring the lands from the MacDonald Lords of the Isles around 1360. The tower is believed to have been built around 1450 by Hector MacLaine, brother of Lachlan Lubanach MacLean of Duart. 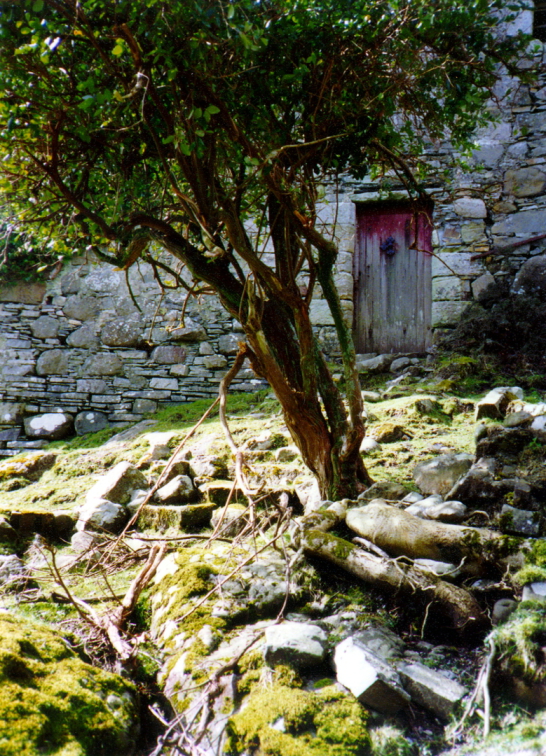 Iain the Toothless, the chief, and his son and heir, Ewen of the Little Head, fought in 1538 over the latter’s marriage settlement: apparently Ewen’s wife was not satisfied with their house on a fortified island in Loch Squabain [NM 631307], and desired something more luxurious. Ewen was slain in the subsequent battle, his head being hewn off and his horse riding away for two miles with the decapitated body. A cairn [NM 649326?] was said to mark the spot where Ewen finally fell from his horse, but this has been destroyed. 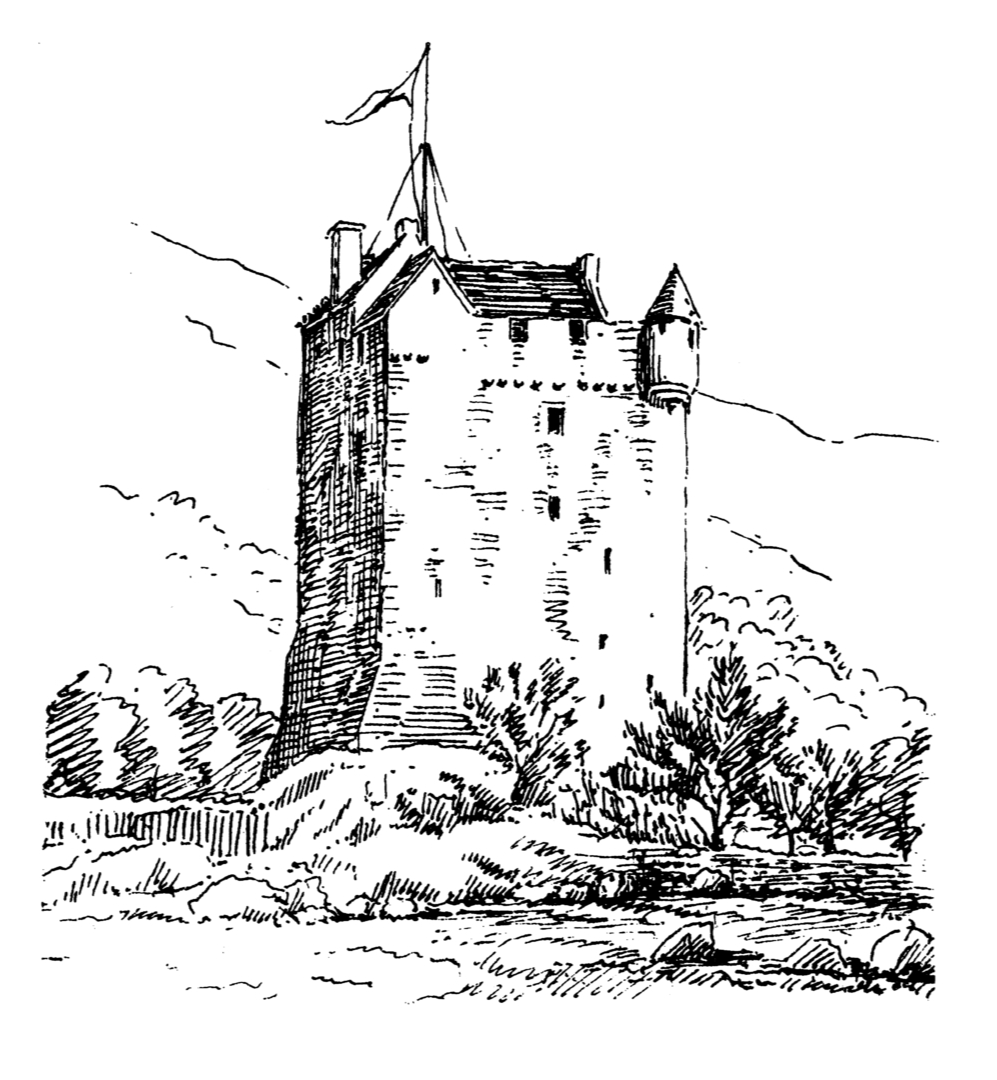 His ghost, the headless horseman, is said to been seen riding in Glen Mor on a dun-coloured horse, sometimes with a green cloak, when one of the MacLaines is about to die. There are also tales of a ghostly black dog. Ewen was buried on Iona, where his grave can apparently still be seen. 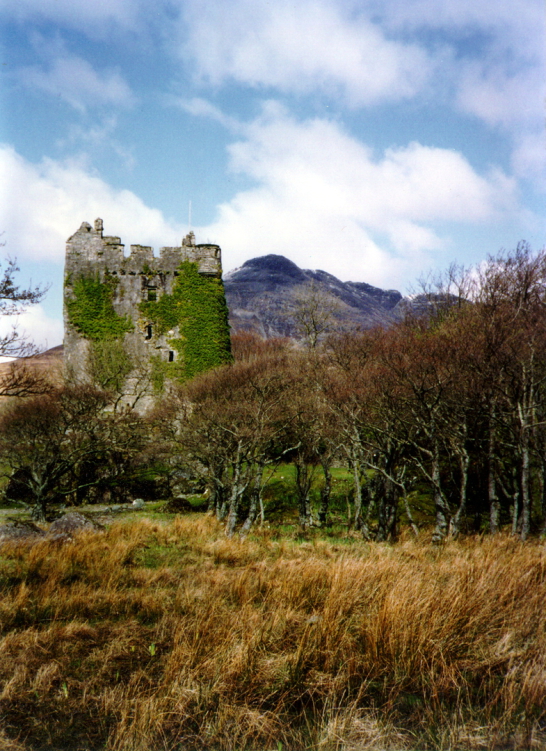 MacLean of Duart, desiring Lochbuie, then imprisoned Iain the Toothless, and confined him on the Treshnish Isle of Cairnburgh to prevent him producing an heir. His only female companion was an old and ugly woman who, however, he contrived to make pregnant. MacLaine, himself, was murdered, but the woman managed to escape, and produced a son, Murdoch the Stunted, who eventually regained the property. 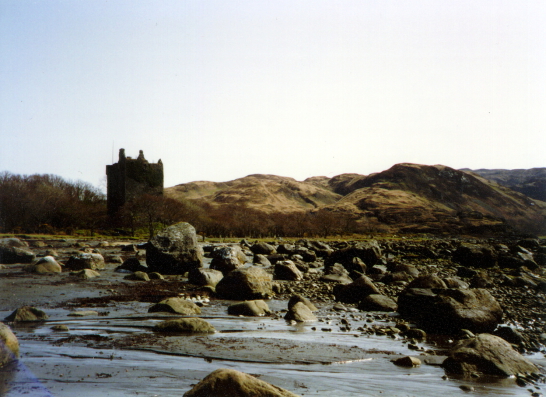 Murdoch MacLaine of Lochbuie, having supported the Marquis of Montrose in the 1640s with his kinsmen from Duart, was forfeited in 1649 for, among other things, ‘having besieged and blocked up the house of Moy, which was kept as a public garrison by order from General David Leslie’ in 1648, and so forced the garrison out. He rode with 300 men to join Bonnie Dundee in 1689. 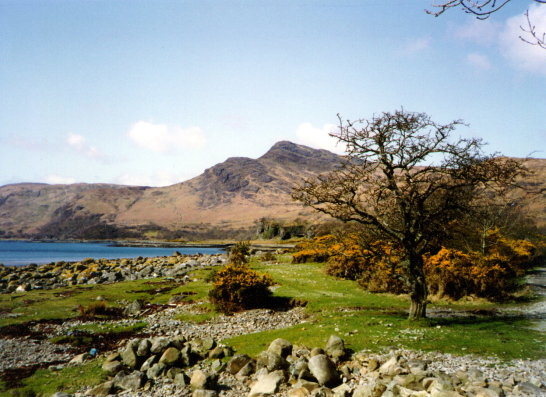 The castle was abandoned in 1752, and when Boswell and Johnson visited Lochbuie in 1773 they stayed in a small house nearby, which was in turn replaced by Lochbuie House [NM 616249], a large Georgian mansion with lower wings.
The MacLaines sold the property in the 20th century, and there is a burial vault with an armorial panel, dating from 1864, at the old chapel [NM 626236], as well as a number of 18th-century memorials. There is also a newer chapel, an Episcopal establishment, dedicated to the (probably mythical) St Kilda. 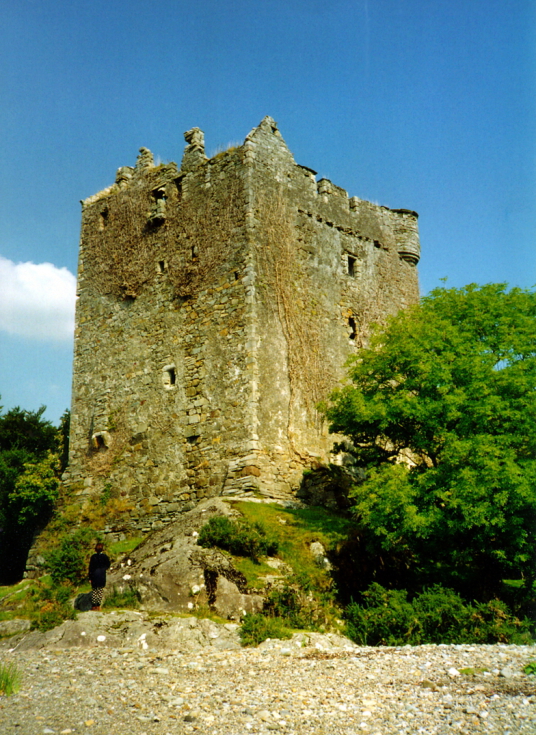 After years of neglect, the tower is being consolidated.
The chief of the MacLaines of Lochbuie lives in South Africa, and the property is now owned by the Corbetts.
The castle featured in the Powell and Pressburger move I Know Where I am Going.