Falkland Palace, a impressive partly ruinous royal residence of the monarchs of Scotland, including James V and Mary Queen of Scots, with some excellent interiors, beautiful gardens and grounds and a real tennis court, in Falkland village, some miles from Glenrothes in Fife in central Scotland. 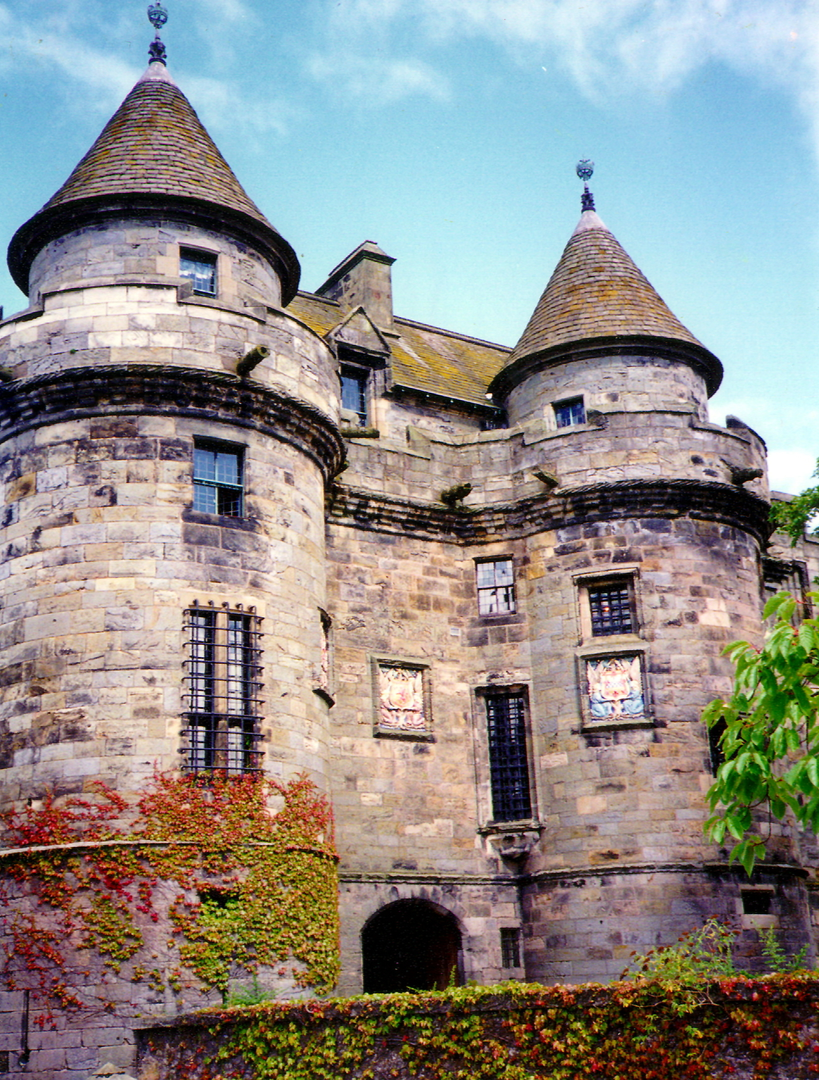 Fife: About 4 miles north of Glenrothes, in Falkland, just north of A912, at Falkland Palace. 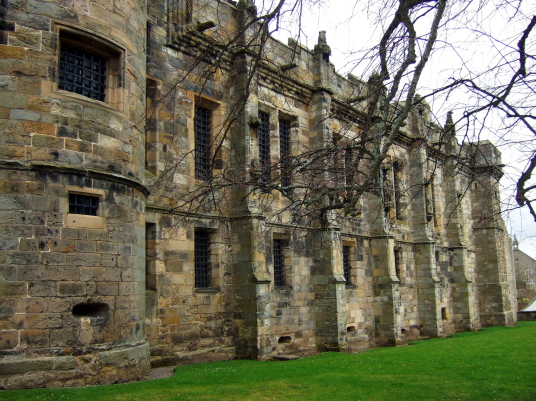 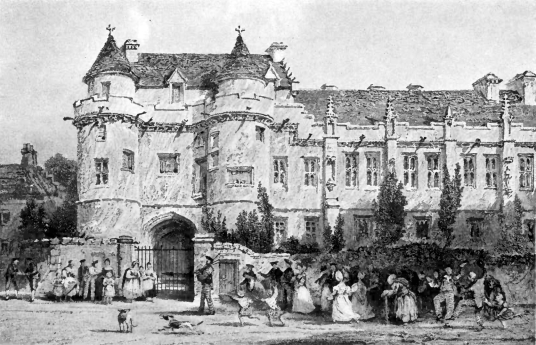 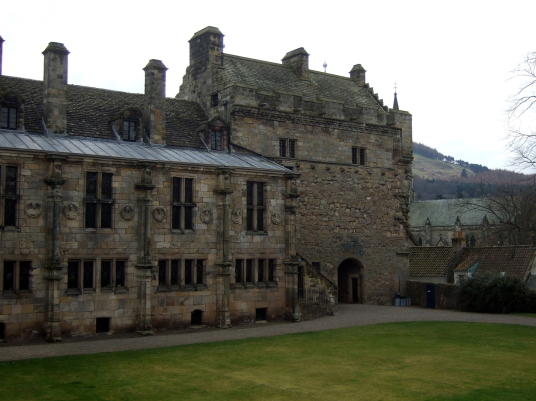 A fortified but comfortable residence remodelled in Renaissance style, Falkland Palace consisted of ranges of buildings around an open court. The late 15th-century gatehouse range survives complete, and has some good interiors. An adjoining range is ruined, and only traces remain of a range opposite the gatehouse. The last side of the courtyard was completed by a wall. Parts of the palace may date from the 13th century, but little remains of an older castle here, except the base of two round towers. 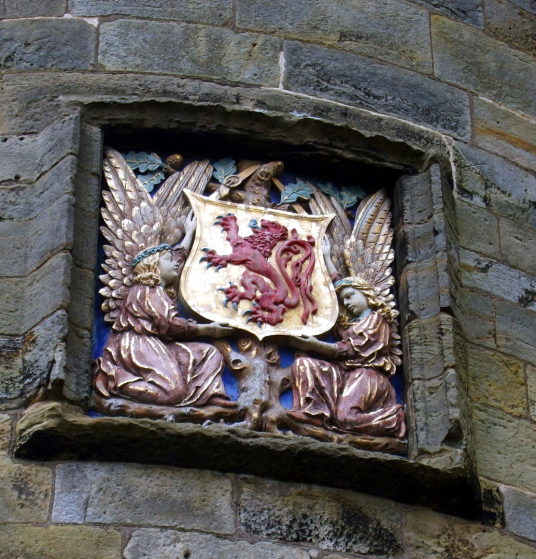 The courtyard is entered through an impressive twin-towered gatehouse range, which has guardrooms on both sides of the entrance, one with a pit-prison. There are painted heraldic panels showing the arms of Scotland. 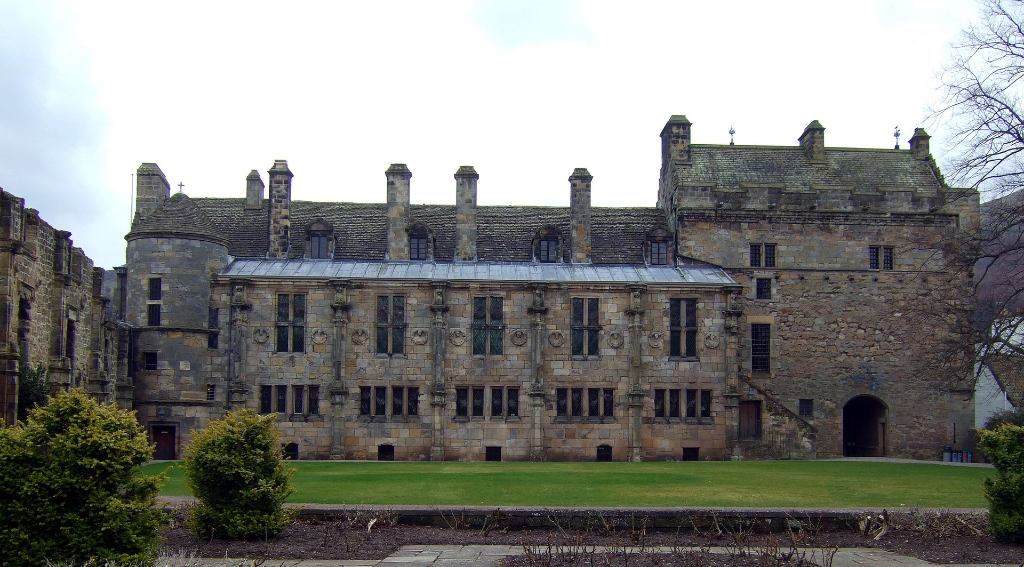 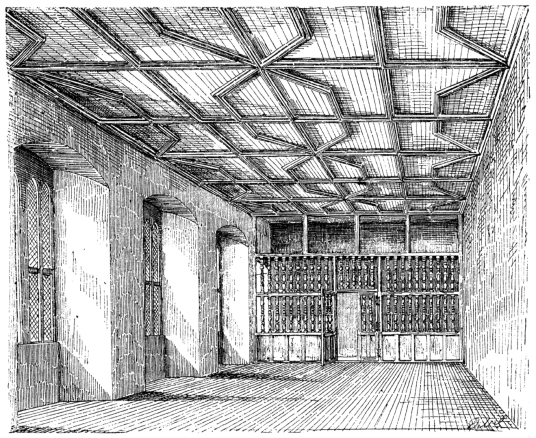 The basement is vaulted, and the first floor has a large chapel, the Chapel Royal, with fine mullioned windows and a 16th-century oak screen at one end. The painted ceiling dates from 1633. There is also a fine tapestry gallery, and access to the keeper’s apartments. 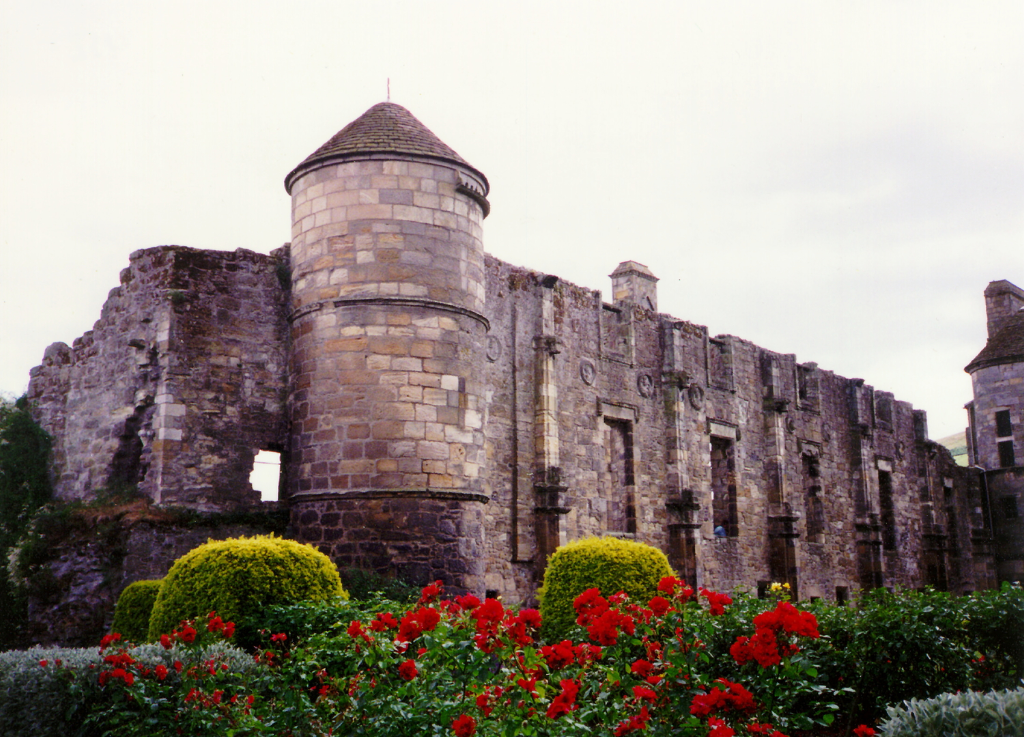 The ruined adjoining range once contained the king’s guard hall, royal audience chamber, and privy dining room, over vaulted cellars. The restored cross house contains a refurbished room, reputedly the King’s Room, where James V died in 1542, as well as the Queen’s Room on the first floor. 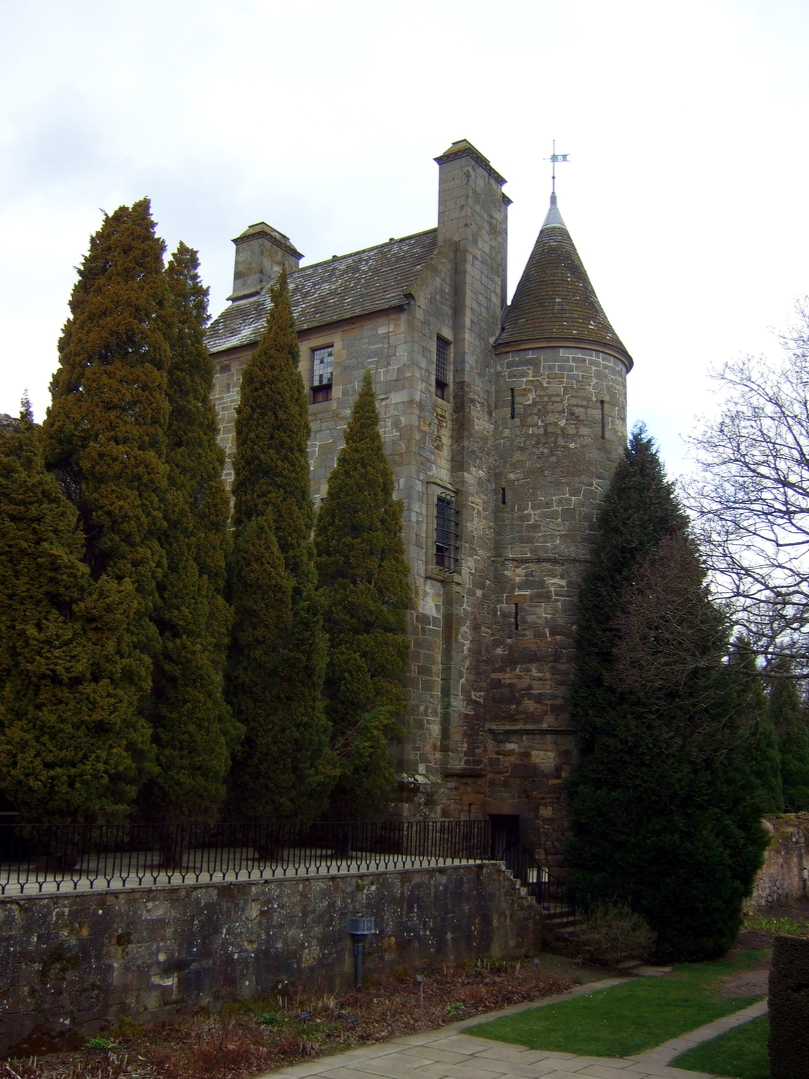 Little remains of the range opposite the gatehouse, but this may have contained a hall, and also had a Renaissance front.
The burgh of Falkland is marked on Blaeu’s map of Fife with a large adjoining park. 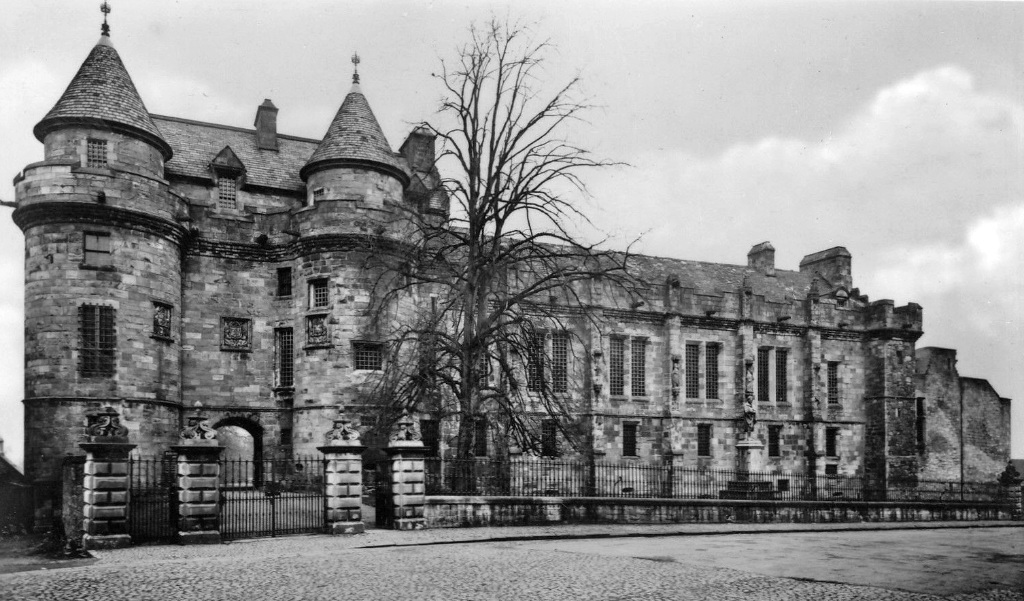 Falkland was used as a hunting seat by the kings of Scots from the 12th century. The property was owned by the MacDuff Earls of Fife in the 14th century, and the castle was destroyed by the English in 1337. It was rebuilt, and in 1371 passed to Robert Stewart, Duke of Albany. He had David, Duke of Rothesay, his nephew and the heir of Robert III, imprisoned here and starved to death, or murdered, in 1402. 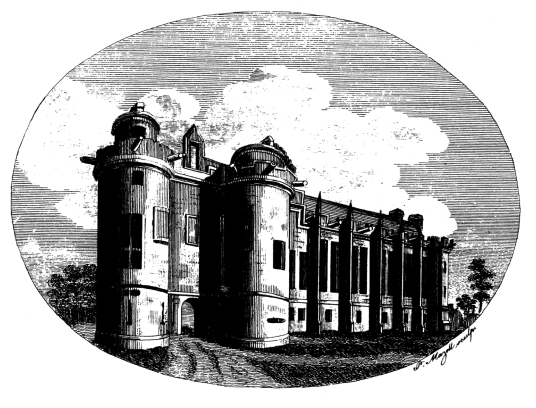 After 1425, Falkland was acquired by the Crown, and was used by Mary of Gueldres, the wife of James II. The Palace is first mentioned in 1455. It became a favourite residence of the Stewart kings, and was used and remodelled by James III, James IV, and James V, who was virtually held prisoner here by the Douglas Earl of Angus in his childhood, and he later died at the palace in 1542. The castle was still in use in the 16th century, but little remained by 1610. 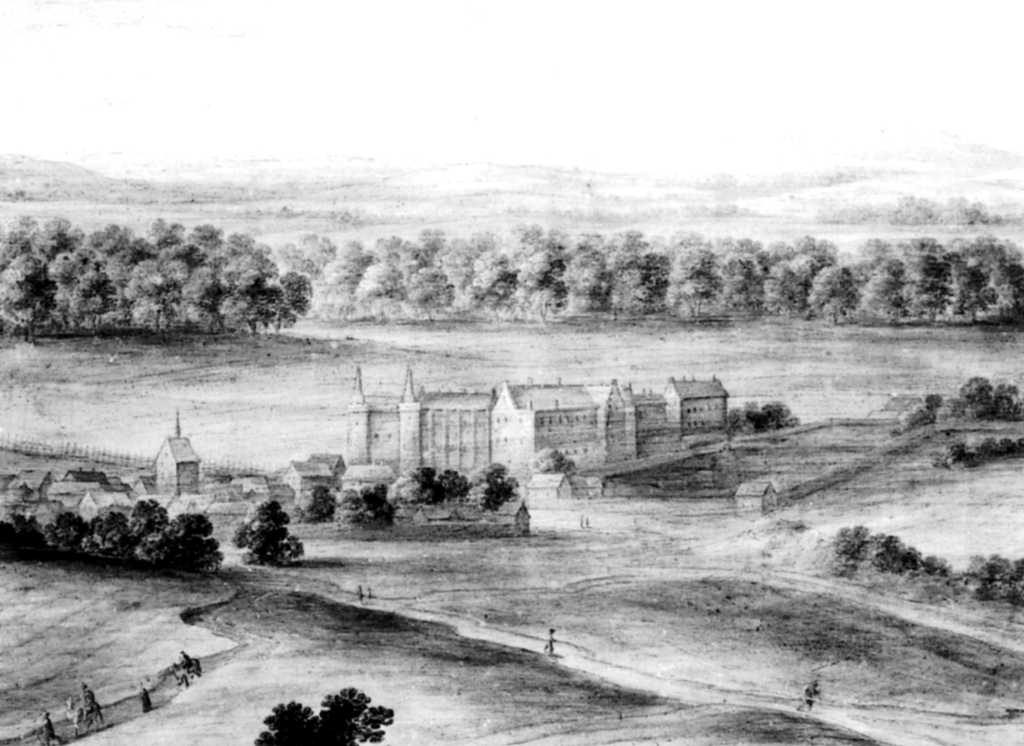 Mary, Queen of Scots, visited the palace in 1563, James VI stayed at Falkland, as did Charles I in 1633, and Charles II in the 1650s. Rob Roy MacGregor was based here in 1716 during the Jacobite Rising. Despite a visit by George IV in 1822, the palace deteriorated until 1887 when it was restored by the 3rd Marquess of Bute. In 1952 The National Trust for Scotland assumed responsibility for the building.

The village is used as a location (Inverness) in the TV series Outlander. 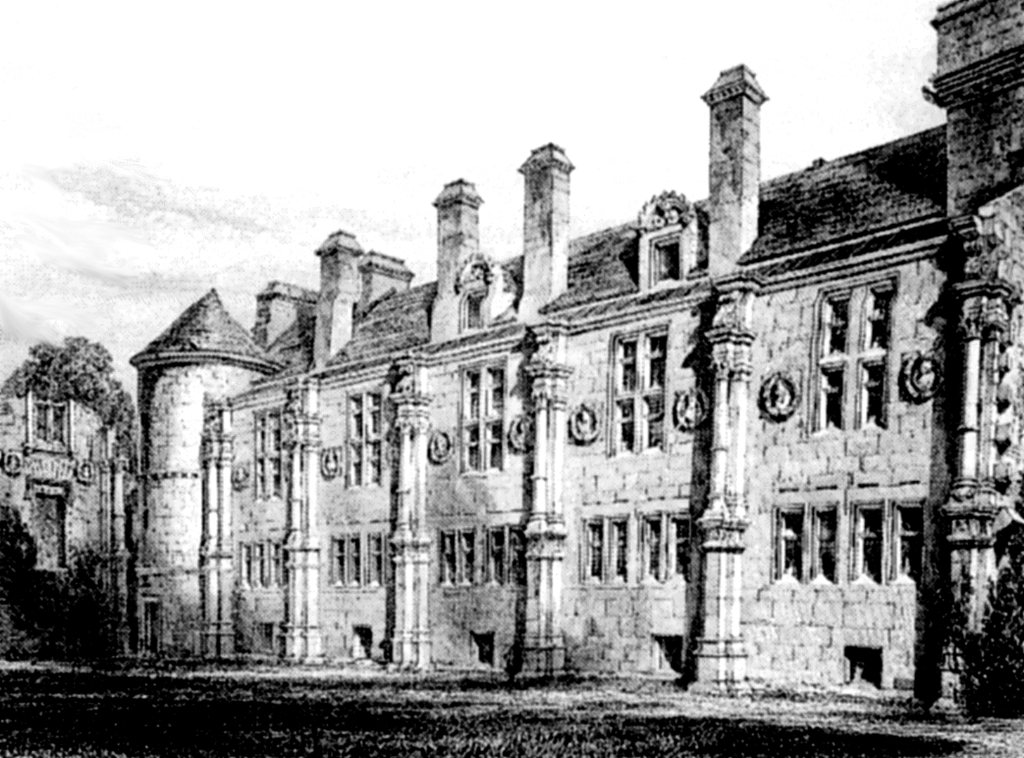 The tapestry gallery is said to be haunted by a ‘White Lady’, although she has also been described as a ‘Grey Lady’. She is said to have pined away after waiting in vain for her lover to return from battle. 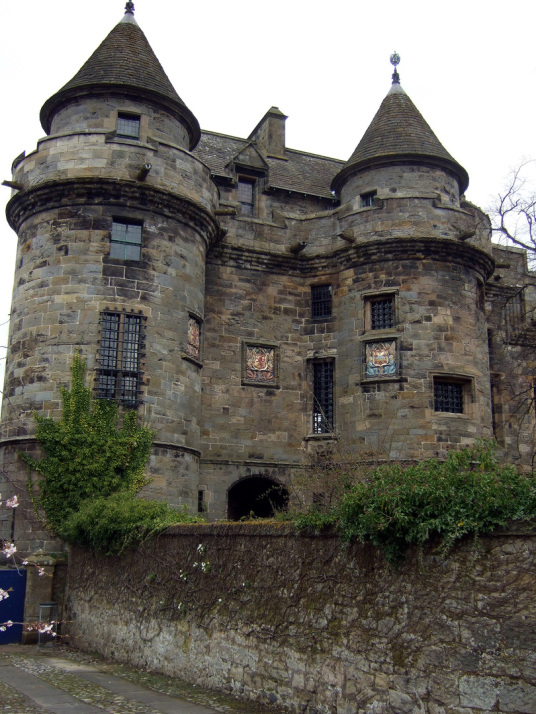 There are extensive gardens and the original Royal Tennis Court, dating from 1539, which is the oldest tennis court in Britain. The palace also has two Pictish Class 1 stones, found at the nearby Westfield Farm in 1971, on display in the museum. The first stone shows two arches, one above the other, and a notched rectangle; the second shows a single disc and rectangle next to a fragment of a double disc. 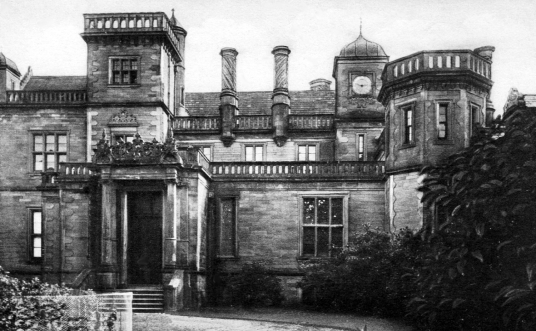 House of Falkland (or Falkland House) [NO 242074] is a Jacobean edifice of two and three storeys, designed by William Burn in 1839-44 and built for the Bruce family. In 1887 it was sold to John Crichton-Stuart, 3rd Marquess of Bute, and later became a Roman Catholic school and now provides education and care to boys with additional support needs.