Fyvie Castle is a large and sumptuous old castle with an impressive interior, set in beautiful gardens and landscaped policies, held successively by the Lindsays, Prestons, Meldrums, Setons, Gordons and then Leiths, and near Rothirnorman in Aberdeeenshire in the northeast of Scotland. 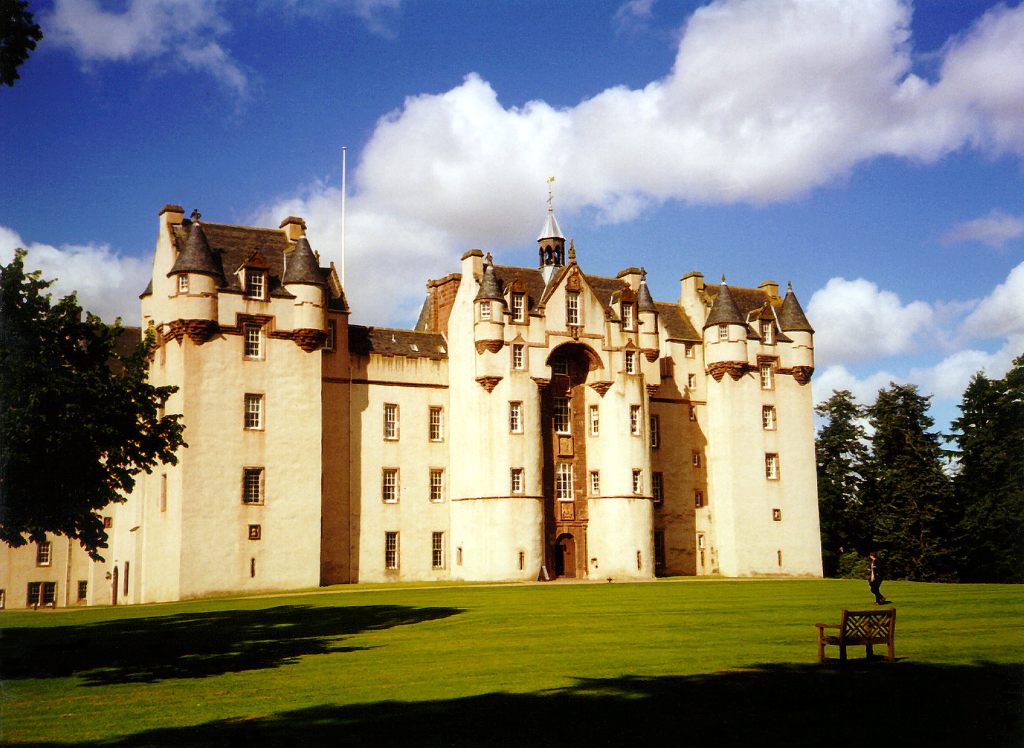 Banff & Buchan: About 3.5 miles north-east of Rothienorman, 1 mile north of Fyvie village, on minor roads west of A947, just south of Ythan River, just north of Loch of Fyvie, at Fyvie Castle. 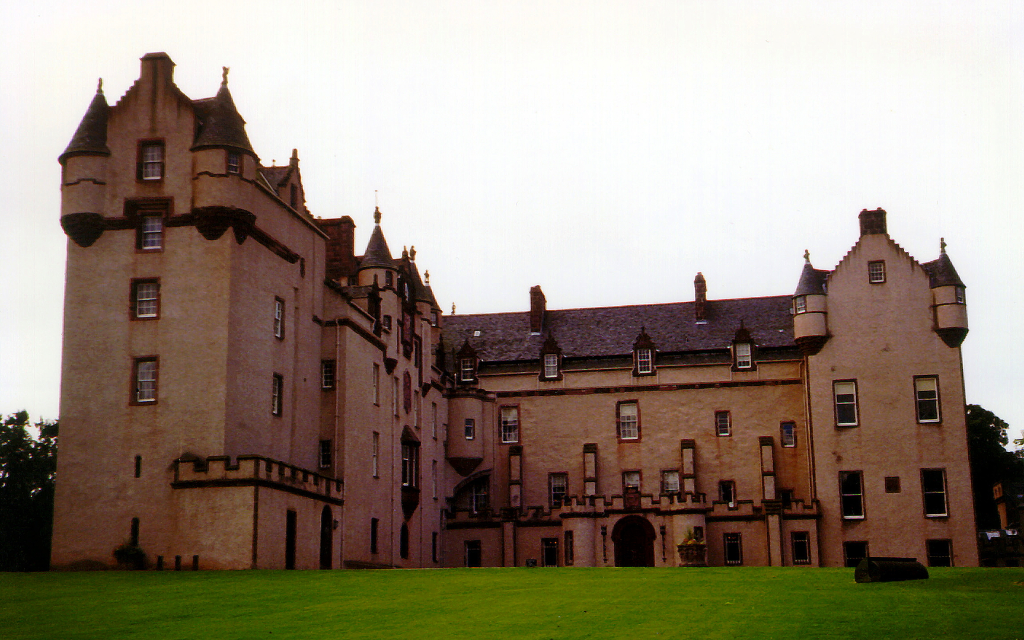 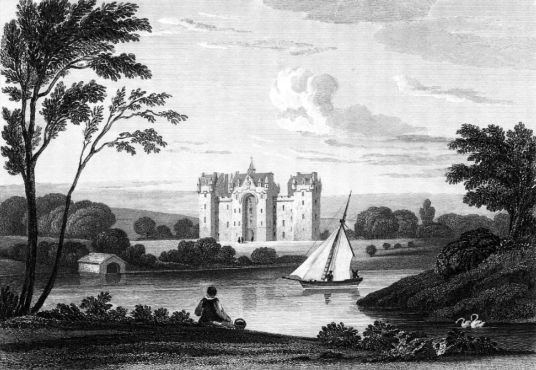 Set in the rolling countryside of Aberdeenshire, Fyvie Castle is one of the largest and most magnificent castles in Scotland. The building consists of a massive tower house of four storeys and an attic with very long wings, and is adorned with bartizans with conical roofs, dormer windows and carved finials, and corbiestepped gables. It was defended by the River Ythan, and down the centuries was developed from a strong castle into a comfortable and striking residence. The castle was formerly built around a courtyard, but the north and east side were lost in the 18th century. 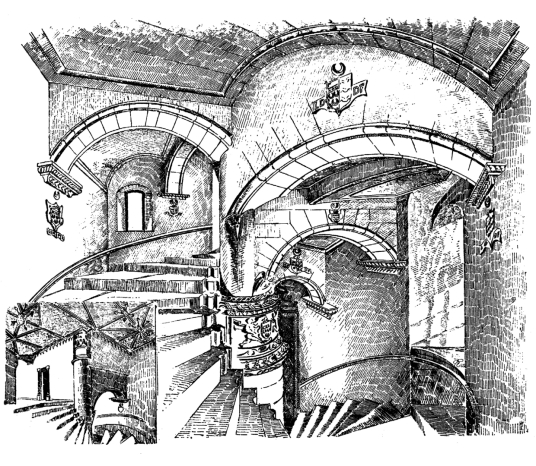 The vaulted basement has both barrel- and groined-vaults. The fine wide main turnpike stair is decorated with 22 coats of arms. Many of the chambers are panelled in wood, and have plaster ceilings and tempera painting. The castle lies in landscaped grounds and there is an 18th-century walled garden with Scottish fruits and vegetables. 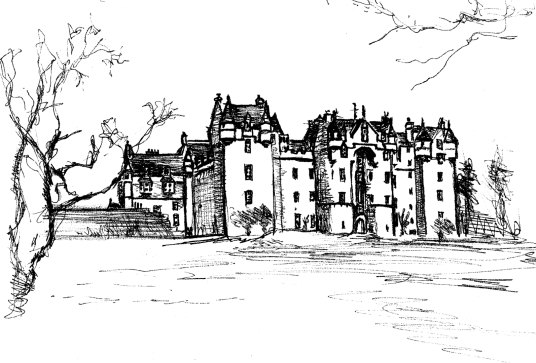 Fyvie was originally a property of the Lindsays. William the Lyon held court here in 1214, as did Alexander II in 1222. Edward I of England stayed in 1296, during the Wars of Independence, then Robert the Bruce in 1308. Margaret Keith, wife to the Earl of Crawford, was besieged here by her nephew. 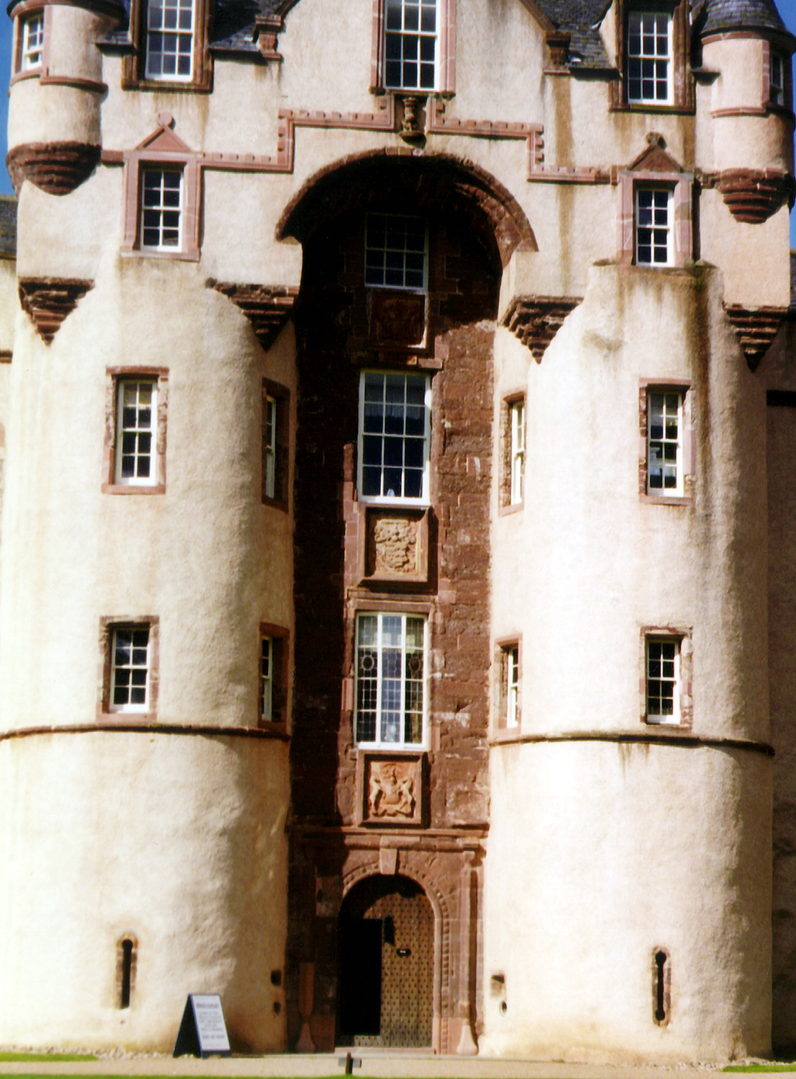 The property passed to the Prestons in 1402, then about 1433 to the Meldrums, then to the Seton Earls of Dunfermline in 1596, the first of whom, Sir Alexander (son of George Seton, 5th Lord Seton), was Chancellor of Scotland. The Marquis of Montrose occupied the castle in 1644, and in the 1650s it was held by a Cromwellian force. 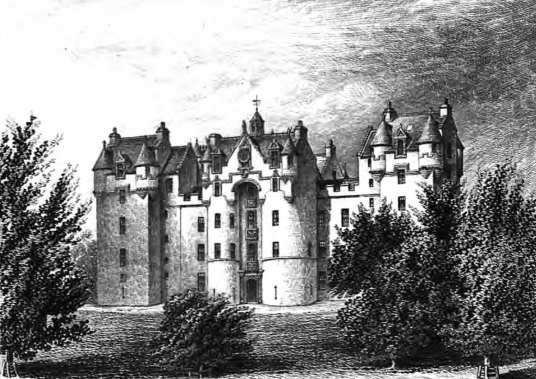 The Setons were Jacobites and were forfeited following the Jacobite Rising of 1689-90. The property passed to the Gordon Earls of Aberdeen in 1733, and finally to the Leith family in 1889, each of whom added to the castle. It was put onto the open market in 1982, and is now owned by The National Trust for Scotland. 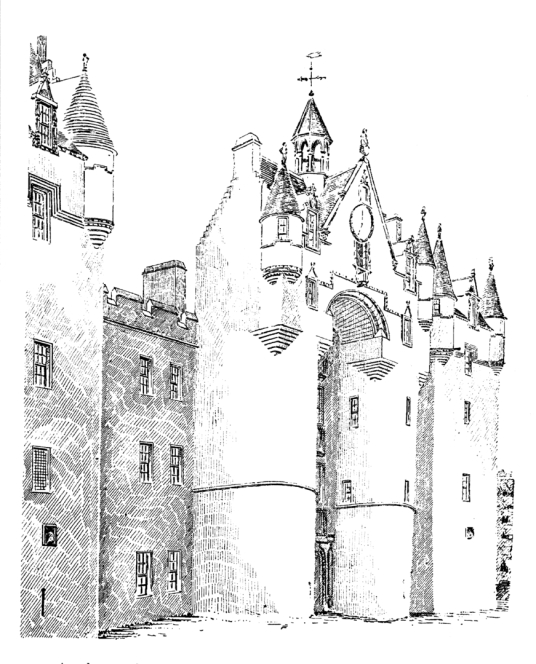 Thomas the Rhymer is recorded as having made a prophecy concerning Fyvie and the ‘weeping stones’ – this would be around the turn of the 14th century, before the Lindsays were in possession. 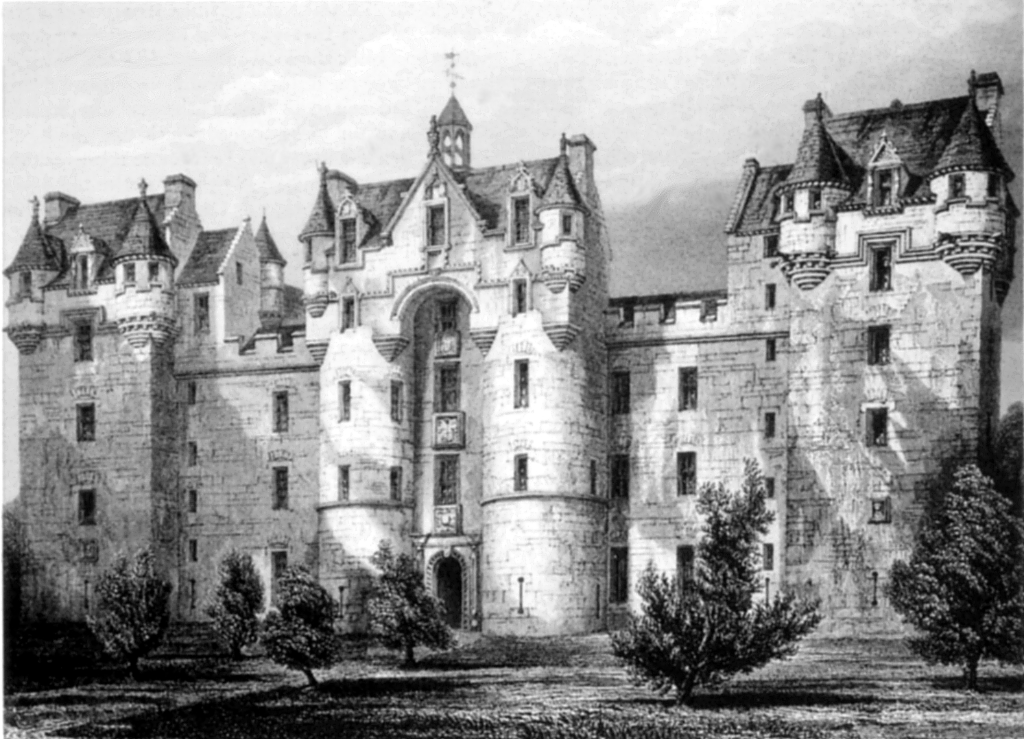 When the castle was first being built, stones were removed from church lands by demolishing a chapel, but fell into a nearby river. The then laird refused Thomas shelter in the castle, and the Rhymer is said to have prophesied that unless the three stones were recovered the castle and estate would never descend in direct line for more than two generations. Only two of the stones were found, and the prophecy is said to have come true. One of the stones is in the charter room, while another is reported to be built into the foundations – and were said to ‘weep’, oozing with water, when tragedy is going to strike the owners. 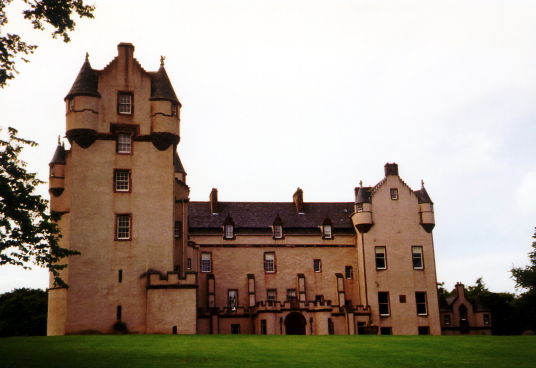 The castle is reputedly haunted by several ghosts. One, the ‘Grey Lady’ is alleged to be the spectre of a lady starved to death here. The ghost is said to have been at her most active in the 1920s and 1930s. When the skeleton was removed disturbances increased until the remains were returned to the chamber.

Another ghost is said to be the ‘Green Lady’, the spectre of Lilias Drummond, wife of Sir Alexander Seton, 1st Earl of Dunfermline (also see Abbot House, Dunfermline and Pinkie House). She died in 1601 at Dalgety in Fife, where she is also buried, and her appearance reputedly bodes ill for the family. She may simply have died of natural causes, having given birth at least five times, but may have been starved to death by her husband, who remarried quickly after her death. Lilias and Seton had had several daughters, but no sons and it may be that he wanted a male heir. The ghost is said to have carved her name on the window sill of the newlyweds’ bedroom, what is now the Drummond Room, the night after they were married – and the writing can still be seen: D[ame] LILLIES DRUMMOND on the outside of the window sill. Her ghost, a ‘Green Lady’, is said to have been witnessed many times down the years, sometimes as a portent of death.

More about the ghost stories can be found at www.bogles.co.uk 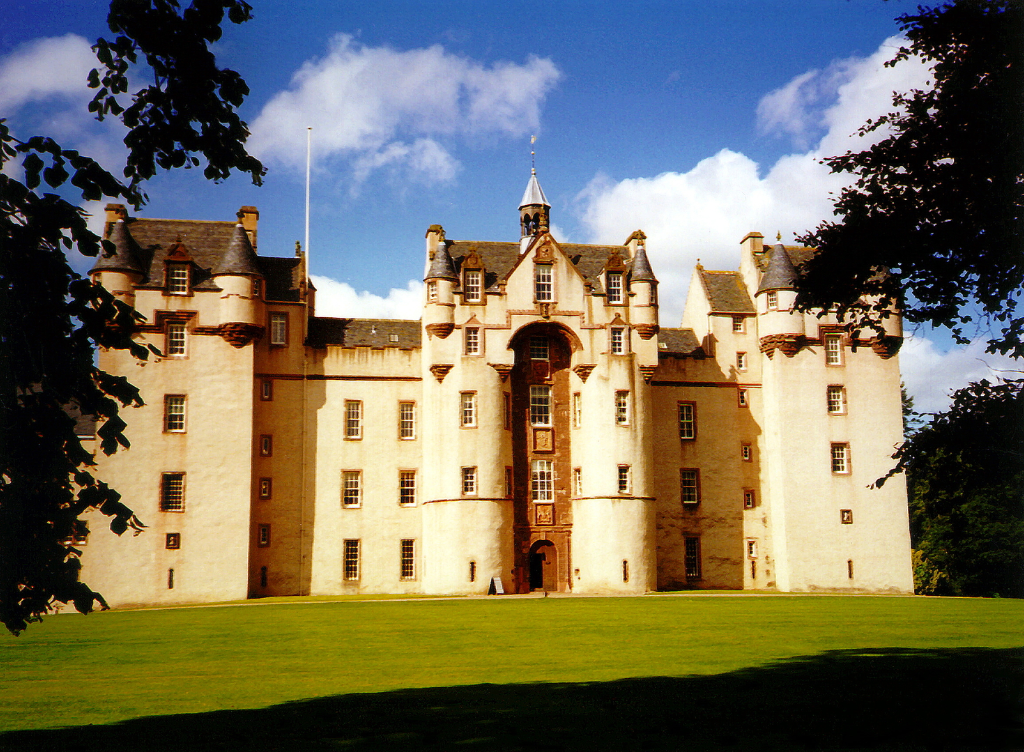 The castle also reputedly has a ghostly trumpeter or drummer, believed to be the spirit of a lad called Andrew Lammie, heard or witnessed when something bad is to happen to the family.