South Highland: About 1 mile north of Dingwall, on minor roads west of A862, on north side of Cromarty Firth, at Tulloch Castle. 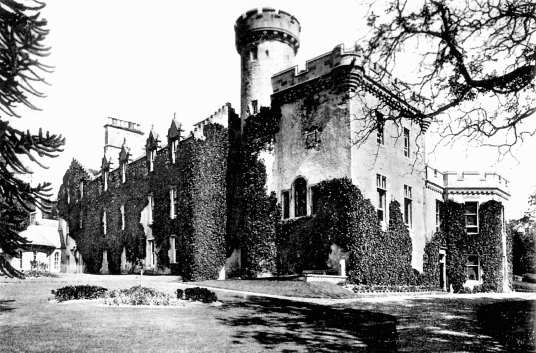 Tulloch Castle incorporates an altered tower of three storeys, possibly from the early 16th century, square in plan, with a round stair-tower at one corner. It may include some work from the 12th or 13th century. The parapet and corbelling of the tower are much later, as is the caphouse. Windows have been enlarged, and the walls are pierced by gunloops, and are harled. There is a large gabled extension of the 17th century, of two storeys and an attic with carved dormer pediments. 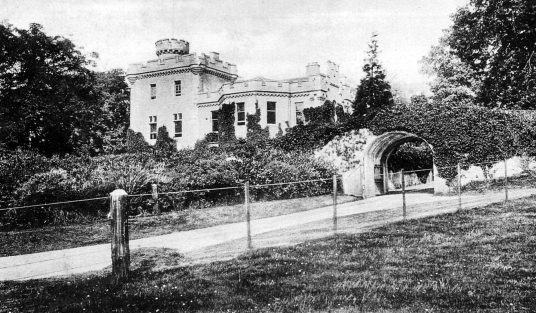 The basement of the tower is vaulted and the hall, on the first floor, has the original fireplace and a secret stair in one corner, which leads to a stair down to another entrance. The first-floor chambers have ornate plaster ceilings.

The place does not appear to be marked on old maps until Roy’s maps of 1747-1755.
The Norsemen may have had a stronghold here. Tulloch was perhaps held by the Tulloch family, but was a property of Farquhar Oure in 1500, then had passed by 1526 to the Innes family, when Walter Innes of Tulloch (Tulchis) received nearby lands from James V.

The property was held by the Bains or Baynes from 1542 when Duncan Bain, 1st of Tulloch, received a royal charter from James V.  John Bain of Tulloch is on record in 1645, then the same or another of that name in 1707. They held the property until 1762 when Kenneth Bain, 8th laird, sold the property.

Tulloch was bought by Henry Davidson, who was related by marriage. Duncan Davdison of Tulloch was MP for Cromartyshire from 1790-96, and the family held it until 1917. Part of the castle was destroyed by fire in 1845. The house was extended in 1891, and in 1920-3 by Sir Robert Lorimer.

The property passed by marriage to the Vickers family (of the Vickers manufacturing company, who among other things produced military aircraft and vehicles) in 1917, and the building was used as a hospital after Dunkirk in 1940.

The castle was sold in 1957 to the local council and it was used to house students at Dingwall Academy until 1976. The lands were sold off and houses built in the grounds, and the castle has been a hotel since 1996.
The castle is said to be haunted by a ‘Green Lady’. The story goes that a child surprised her father with another woman. The child was so startled that she fled the room and fell down a flight of stairs, killing herself.
There is a tunnel from the basement of the castle which is believed to have led across the town to Dingwall Castle. It has collapsed but part of it can be seen from the middle of the front lawn.