Dunrobin Castle, the maginficent, fairytale old stronghold of the Earls and Dukes of Sutherland in beautiful gardens and grounds, by the sea near Golspie in Sutherland in the far north of Scotland. 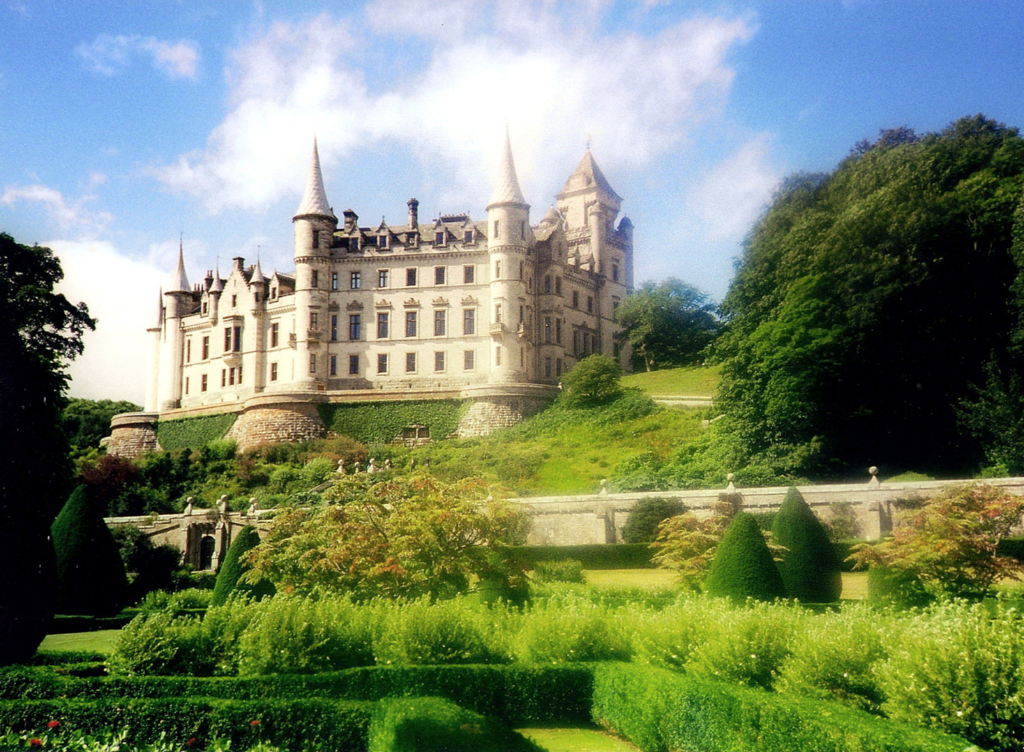 Sutherland & Caithness: About 1 mile north-east of Golspie, on minor roads south of A9, at Dunrobin Castle. 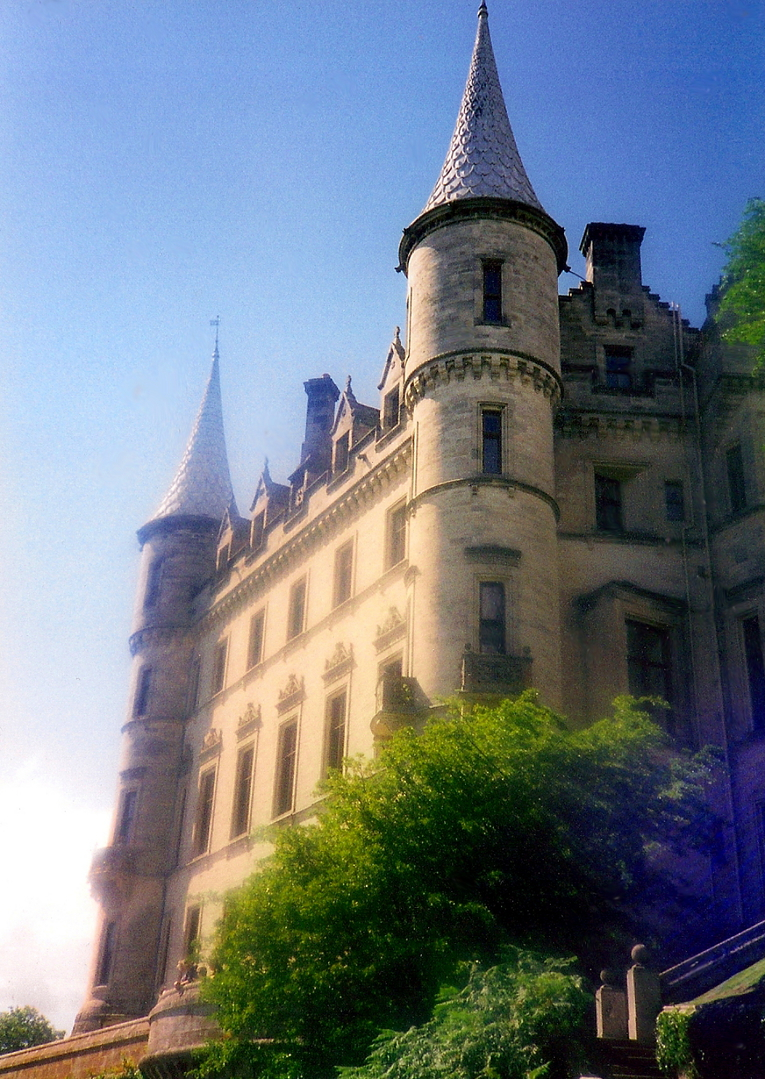 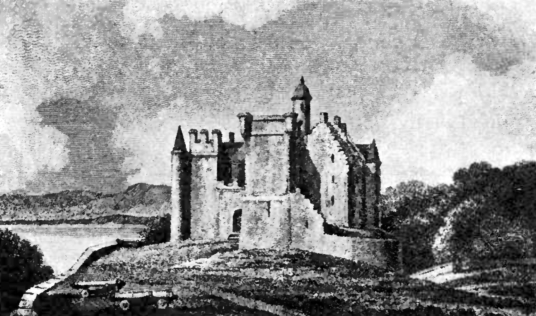 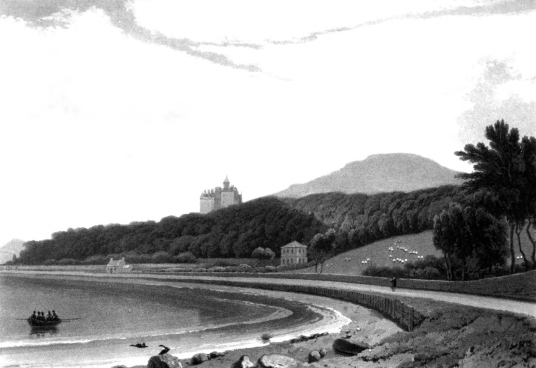 Dunrobin Castle is an elegant fairy-tale castle in a lovely location among splendid formal gardens with a fountain. ‘Dun Robin’ is marked on Blaeu’s map of Sutherland. The castle incorporates an altered 15th-century tower – parts of which may date from the 1300s – and 17th-century courtyard mansion, with round corner turrets, which was greatly enlarged in the 18th and 19th centuries. 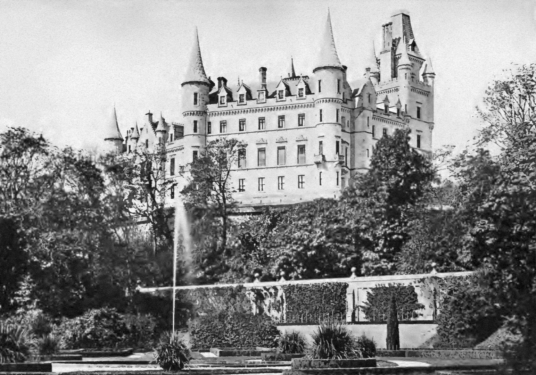 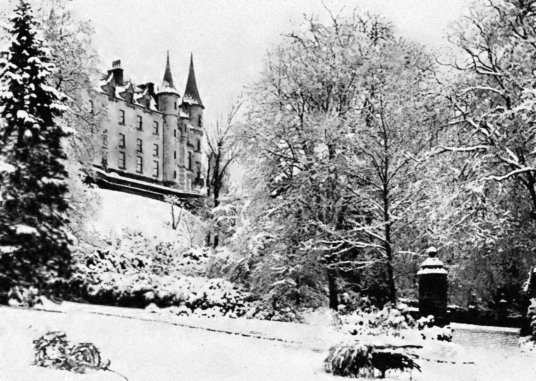 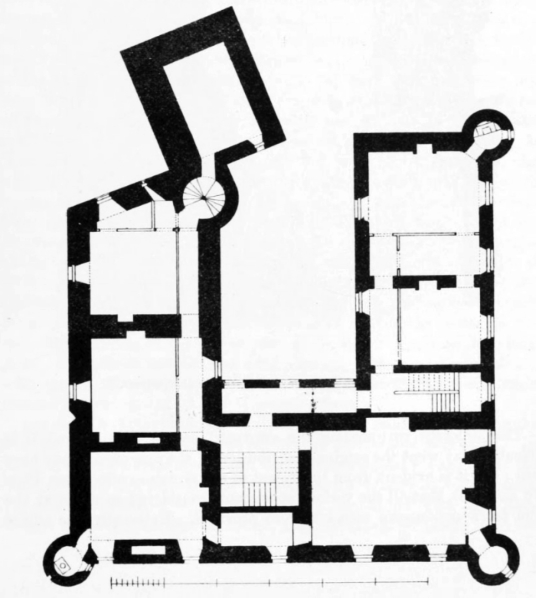 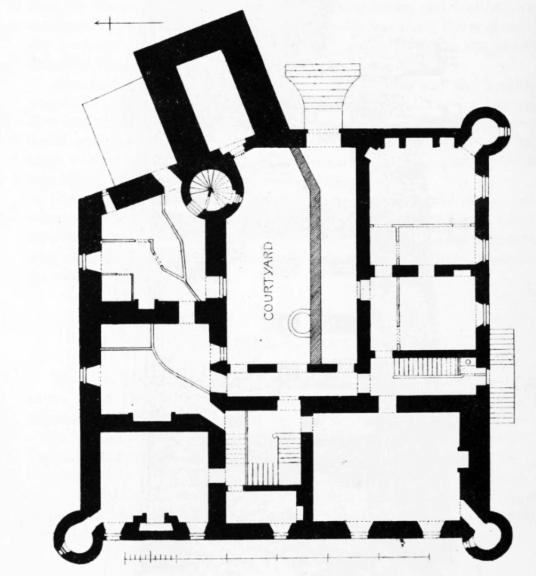 The tower is vaulted on all floors, and still has its original iron yett. With the tower, the 17th-century L-plan block of three storeys and a garret formed a courtyard. A large round tower joins up this block and the tower. The castle was remodelled and enlarged between 1845 and 1851, and again in 1915-21 by Sir Robert Lorimer. 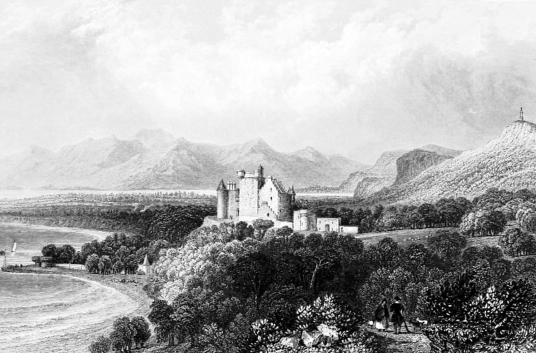 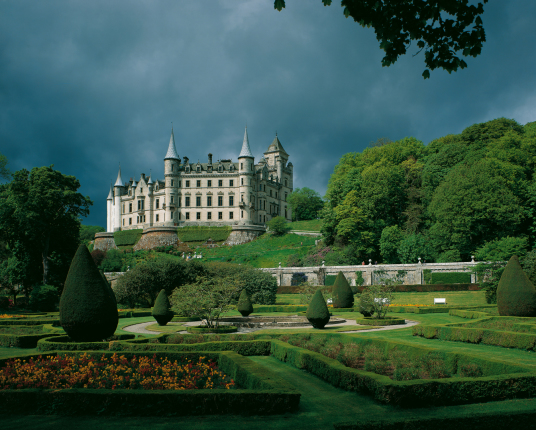 Dunrobin Castle (© and many thanks to Tom Wolf, www.tom-wolf.com) 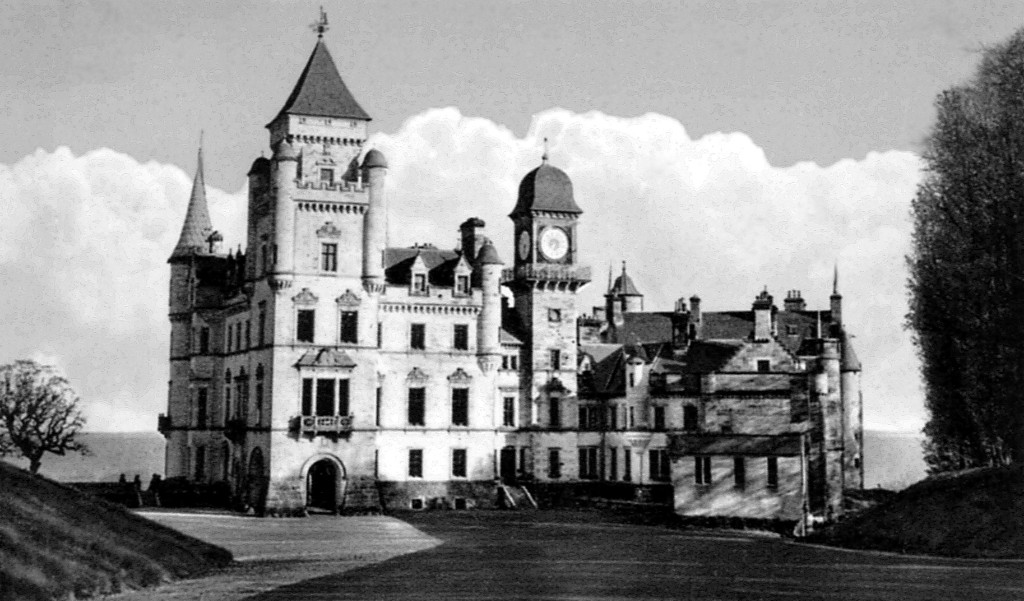 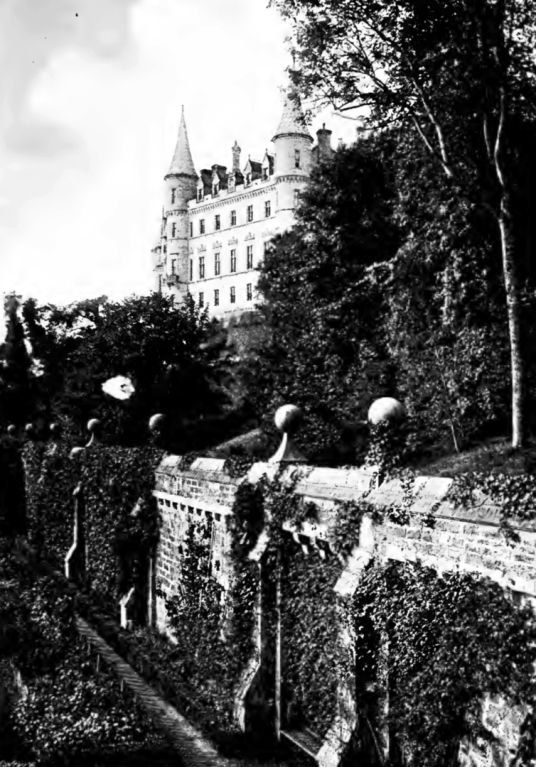 The Sutherland family were made Earls of Sutherland in 1235, and Kenneth, 4th Earl and Regent of Scotland, was slain at the Battle of Halidon Hill in England in 1333. William, the next Earl, was murdered in a feud with the Mackays, and the 6th Earl, Robert or Robin, is believed to have built the first castle, which is named after him. John, 8th Earl, was declared unfit, and the earldom passed to the Gordons. 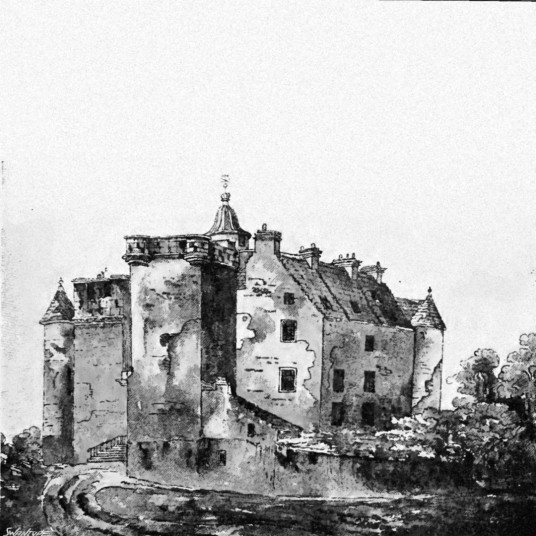 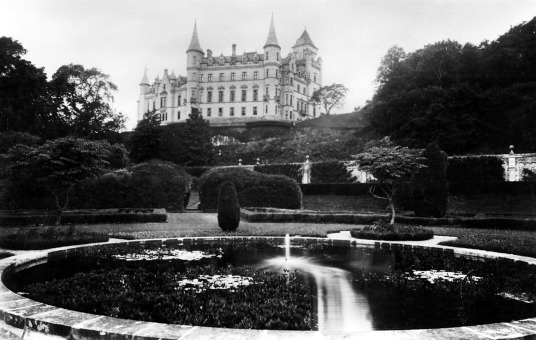 Isobel Sinclair poisoned John, 11th Earl of Sutherland, and his wife at Helmsdale Castle, hoping to secure the succession of her son, but Alexander, the future 12th Earl, escaped, and she managed to poison her own son. The young Earl of Sutherland escaped to Dornoch Palace or Skibo Castle, where he was eventually captured by the Earl of Caithness and forced to marry Lady Barbara Sinclair, who was twice his age. When he came of age, he divorced her, and assumed the title. 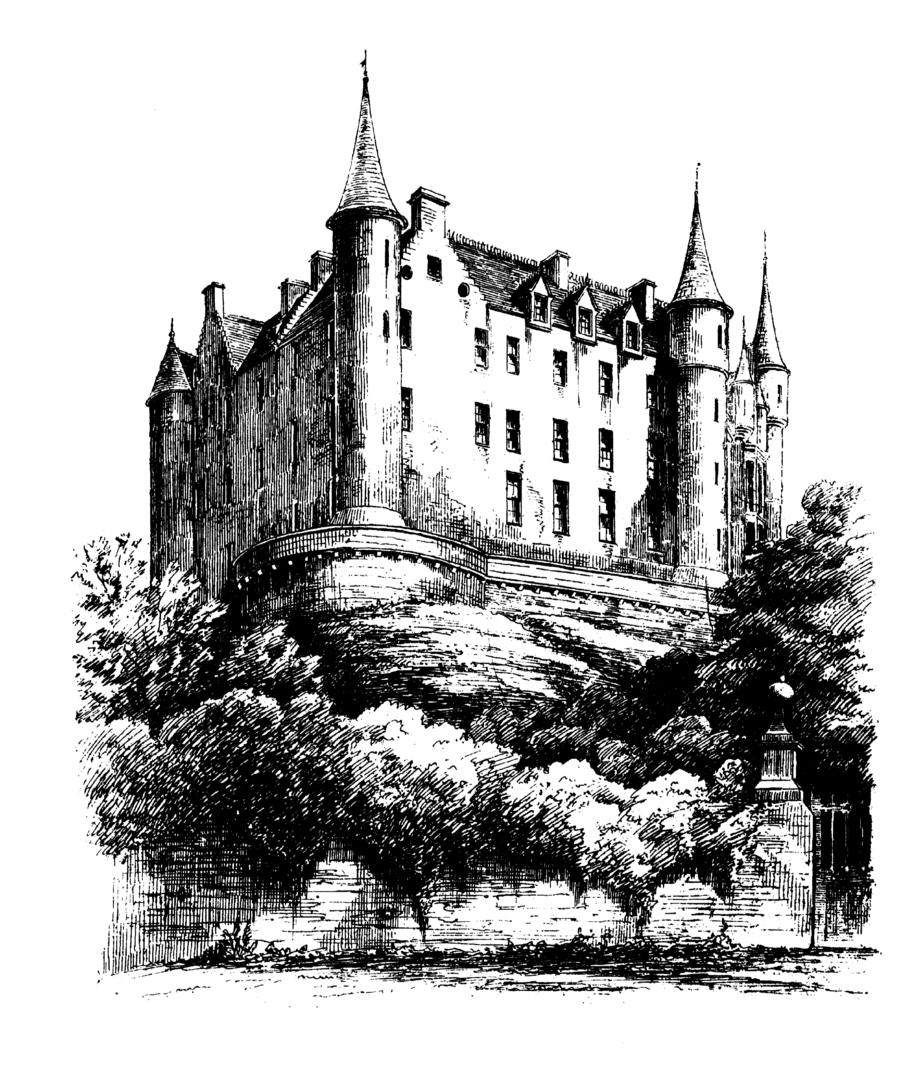 John, 16th Earl, took the name Sutherland, and supported the Hanoverians in the Jacobite Rising. The Jacobites seized Dunrobin, but they soon surrendered after being surprised by government forces, and George Mackenzie, Earl of Cromartie, was captured and sentenced to death, although he got a remission. 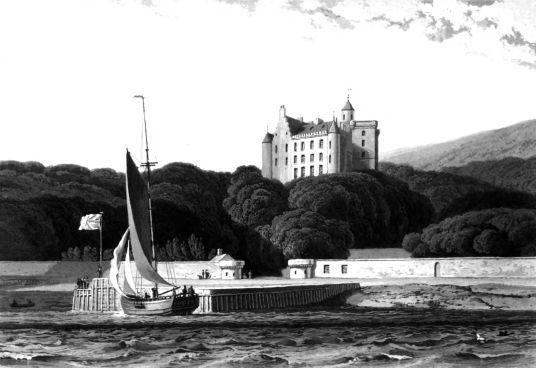 The male line of the Sutherlands failed, and the property went through an heiress to the Marquess of Stafford, and they were made Dukes of Sutherland in 1833. Done for whatever motives, the family are remembered from their brutal treatment during the Clearances, when many of their own tenants were cleared from lands they had held for generations. The 3rd Duke contributed much of his money to the building of the railway to the north. 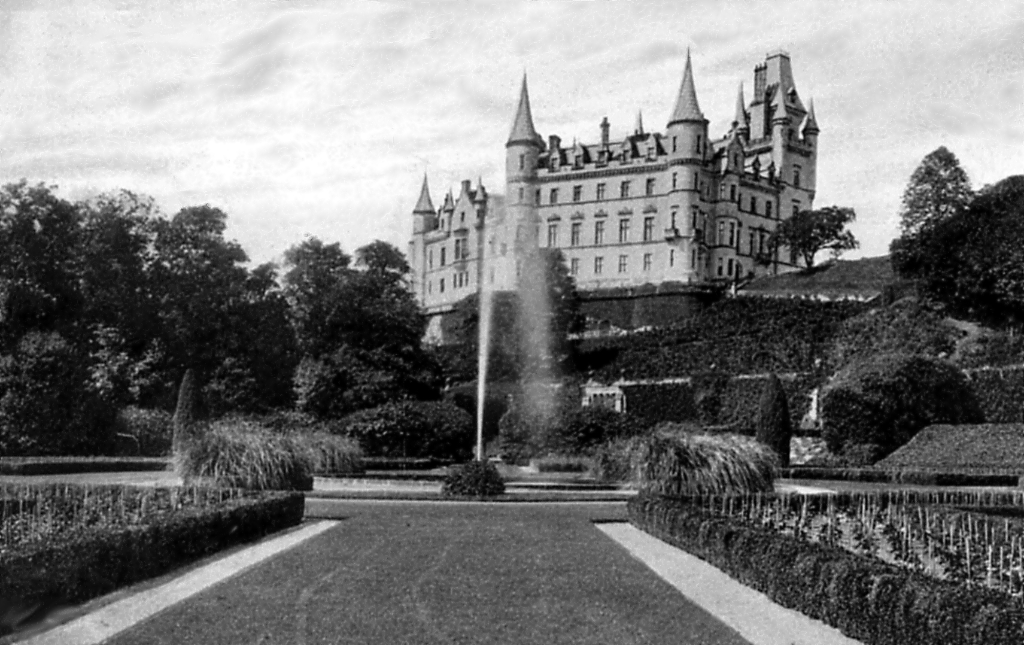 The male line failed again, and the Earldom and Dukedom have parted company: the Earldom went to the present Countess of Sutherland, while the Dukedom went to the next male heir, the Earl of Ellesmere. During World War I the castle was used as a naval hospital, and as a boys’ public school between 1965 and 1972. Dunrobin is still held by the Countess of Sutherland, who has residences at House of Tongue and in London. 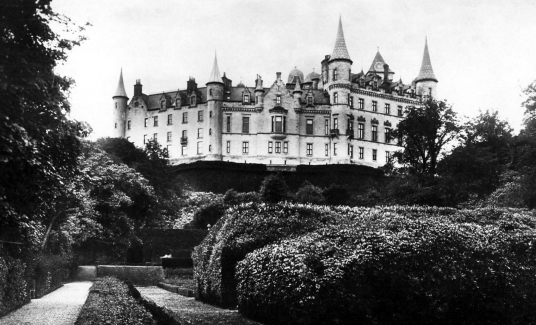 Set in the grounds of the castle, Dunrobin Museum holds an excellent collection of Pictish stones from around the area, both whole and fragmentary, including a cross-slab (Golspie Stone) from St Andrews kirkyard with Pictish symbols and an Ogham inscription. 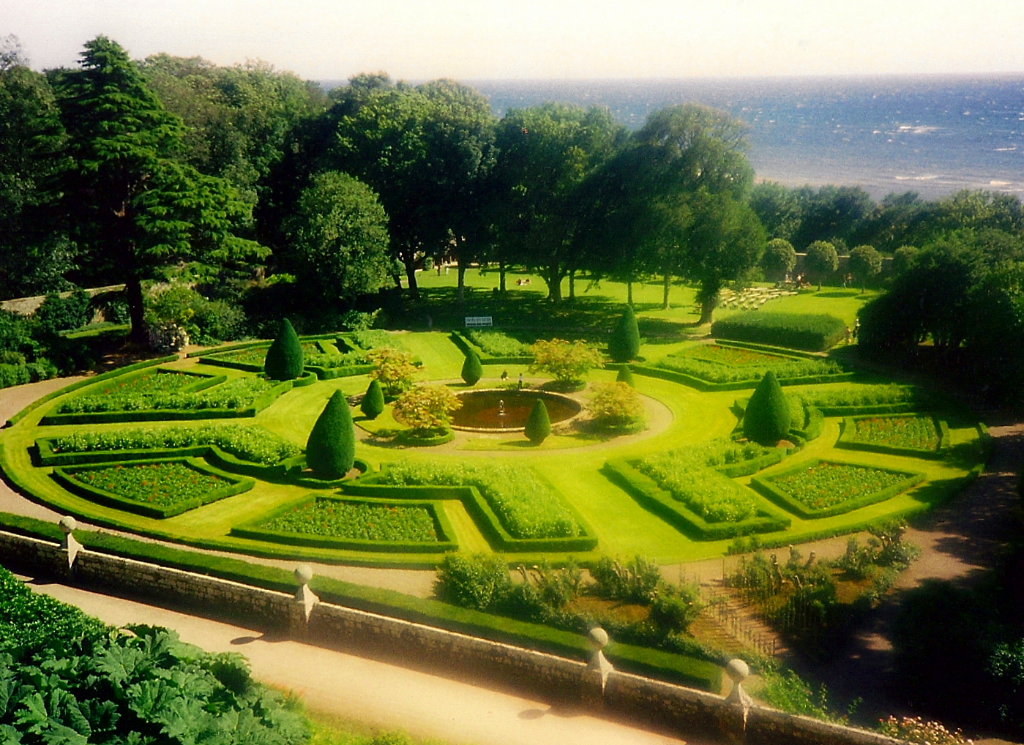 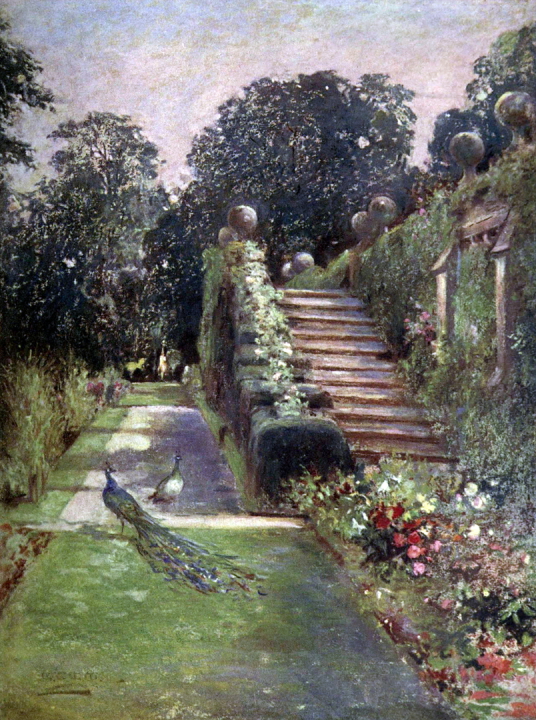 The upper floors of the castle are reputedly haunted by the spectre of Margaret, a daughter of John, 14th Earl, who died in 1679 (he also had a daughter called Jean, but she is recorded as being married in 1657). Margaret decided to elope with her lover but her father, who considered the man unsuitable for his daughter, found out, and had her imprisoned in one of the attic rooms. She tried to escape by climbing down a rope, from one of the upstairs windows, but her father surprised her, and she fell to her death. 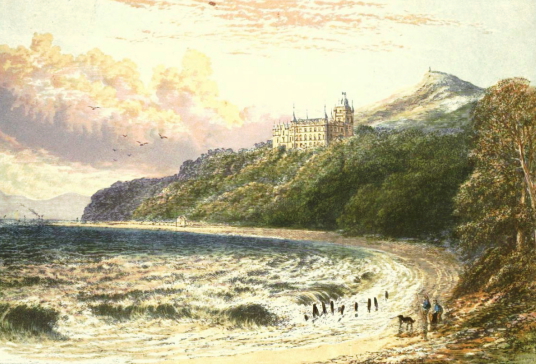 The following is the account of this castle of the "far north," given by Sir Bernard Burke, in his "Visitation of Seats:"

"Dunrobin Castle was first built by Robert, Earl of Sutherland, in the year 1275. It stands nearly in the middle of the parish of Golspie, upon the edge of a bank that rises considerably above the level of the sea. The building is of that old-fashioned style of Scotch architecture which defies classification, but which at the same time has a picturesque interest that does not always belong to more legitimate edifices. Narrow towers, tapering off like spires, and much lower than the building itself, flank either end, while the numerous windows look out quaintly from the dark and irregular mass.

The adjacent landscape is varied and hilly, with no want of timber; and the garden, which spreads itself out at the foot of the eminence on which the castle stands, harmonizes well with the character of the castle and its grounds, which have been vastly improved by the present noble proprietor."

The tower or castle of Dunrobin, even still existing, was reputed to be the oldest manse in Scotland.

The present mansion was designed and commenced in the year 1845. The style is, in the main, that of the old English baronial castle. The successive Earls of Sutherland have added to their possessions generation after generation, and they now comprise the whole of what is called the Red Country, and also the estate and parish of Assynt, which was forfeited to the crown by the attainder of the Earl of Seaforth, and was sold to William, eighteenth Earl of Sutherland. It is a wild district of mountain and moor. The whole consists of eight or nine hundred thousand acres, and a late duke made, at his own expense, about nine hundred miles of road through it, with bridges, etc., and all without a turnpike gate.

"Above the principal windows, the motto "Sans Peur" is carved in raised and fanciful characters, with date, initials, etc. The interior of the building, the lobby, and stairs are faced with Caen stone. The dining-room is forty by twenty-three feet. The drawing-room windows overlook the sea, and command an extensive view. The state rooms, or "Queen's apartments," as they are called, are richly furnished and ornamented. Below is a terrace walk, a slope covered with noble trees, and parterres, winding walks, etc., the sea terminating the whole, and forming the most prominent, as it is the grandest feature of the landscape."

The family of the Duke of Sutherland descends, as stated in a previous article,

From: A Series of Picturesque Views of Seats of the Noblemen and Gentlemen of Great Britain and Ireland, Volume II (by F. O. Morris, 1880s)