Dunstaffnage Castle, an impressive but grim old ruinous walled castle, long held by the Campbells, with later tower and atmospheric chapel in a wooded spot near Oban in Argyll in western Scotland. 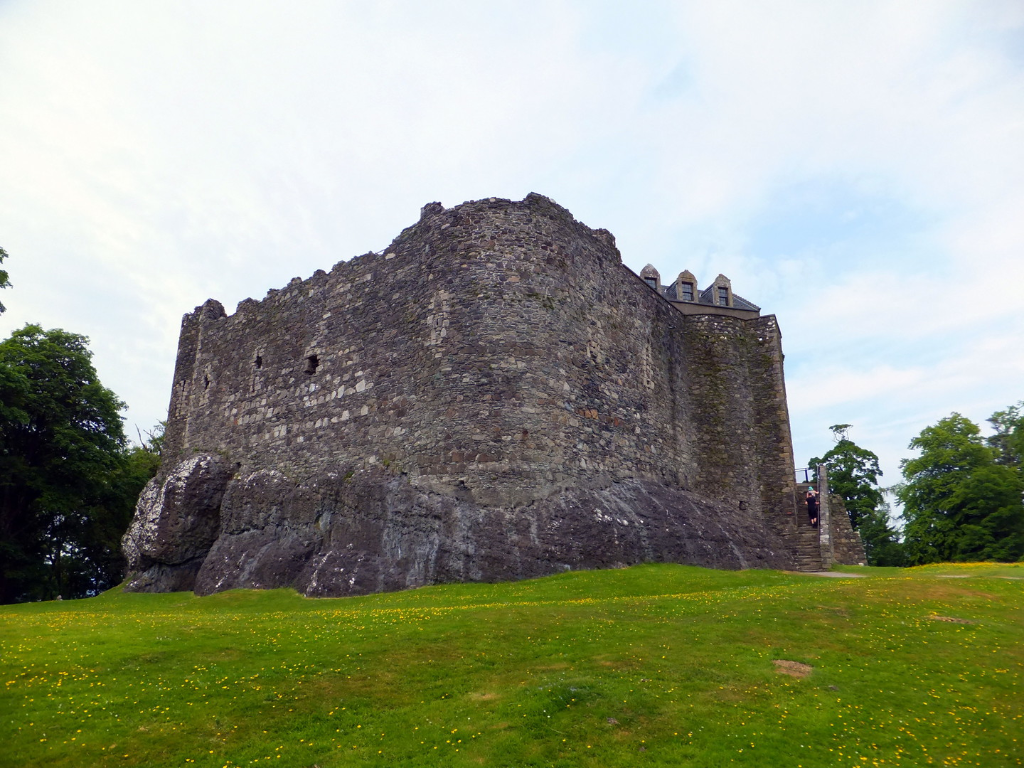 Argyll & Dunbartonshire: About 3.5 miles north-east of Oban, on minor road north of A85 at Dunbeg, on headland north of Dunstaffnage Bay, near the sea, at Dunstaffnage Castle. 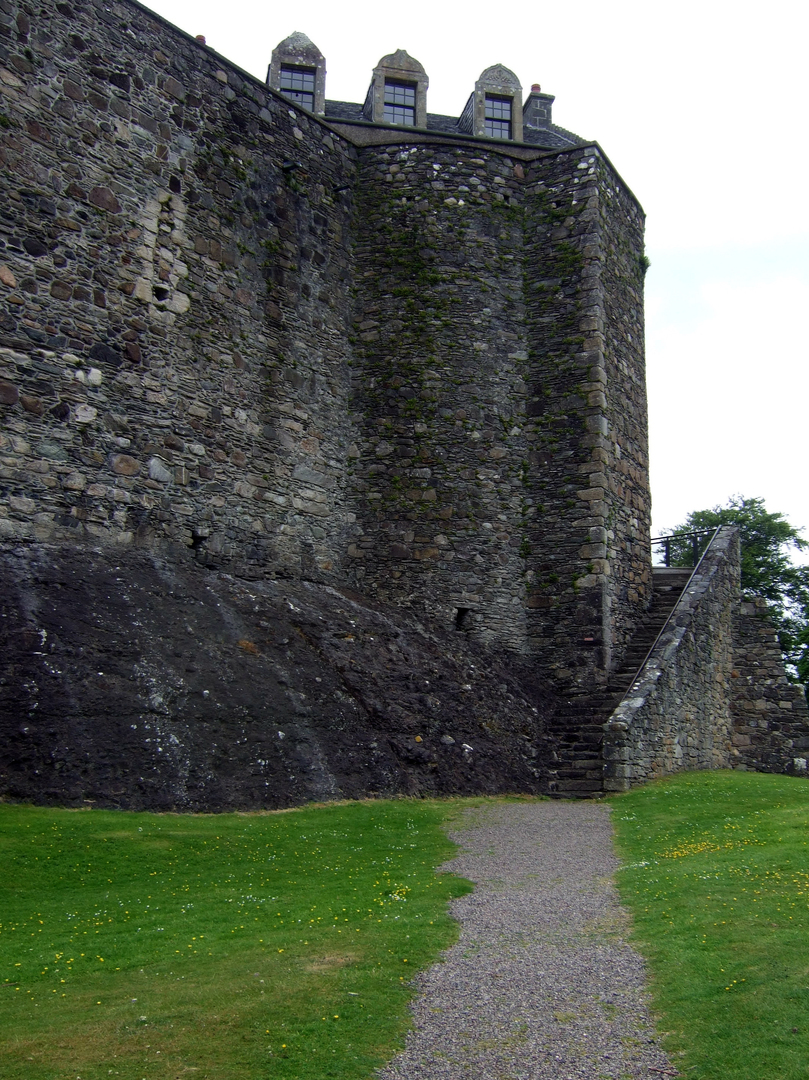 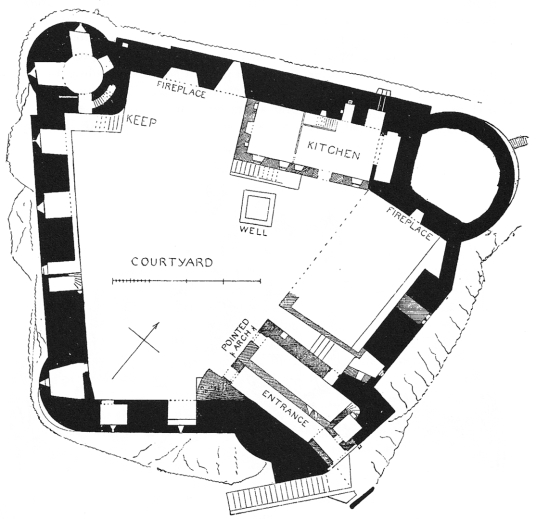 On a promontory in the Firth of Lorn said to have once been an island, Dunstaffnage Castle consists of a massive 13th-century curtain wall, with round towers, and an altered 16th-century gatehouse. The wall is 60-foot high in places, crowned by a parapet with a wall walk, still accessible for part of the wall, and is pierced by arrow slits. Ranges of buildings within the walls contained a hall and kitchen. 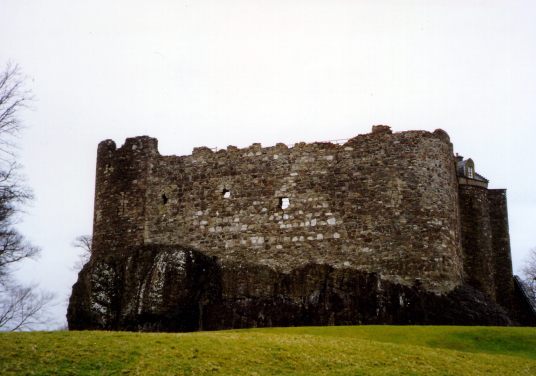 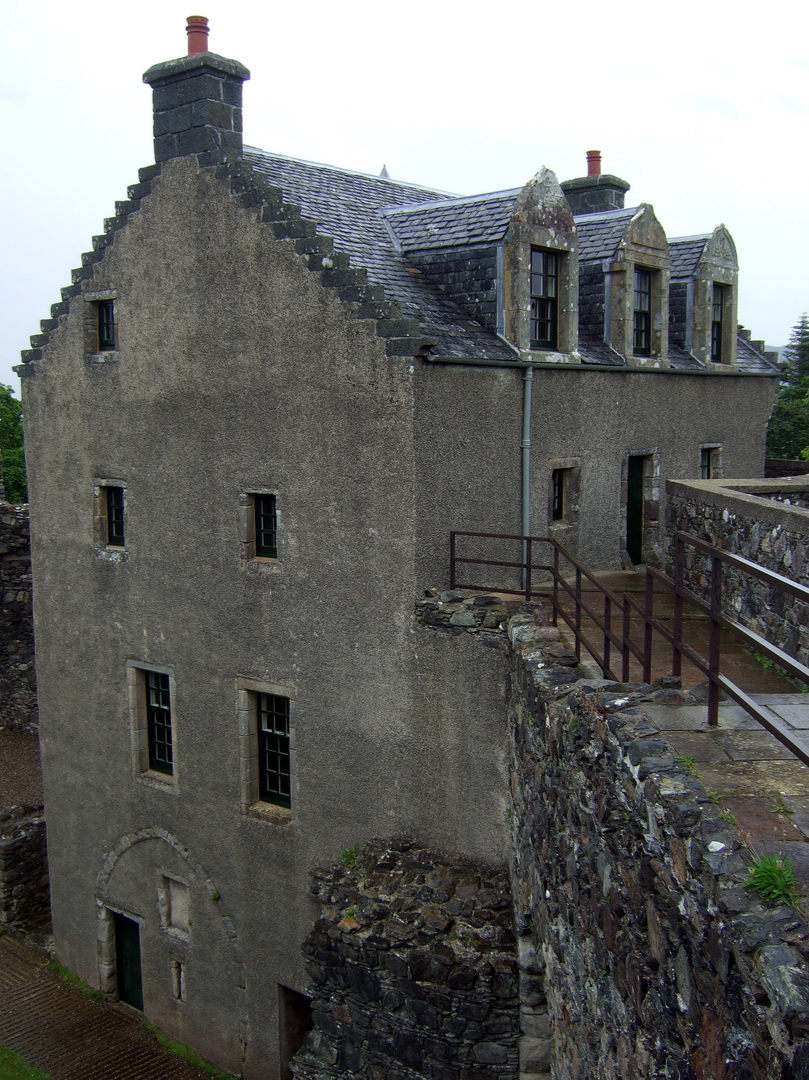 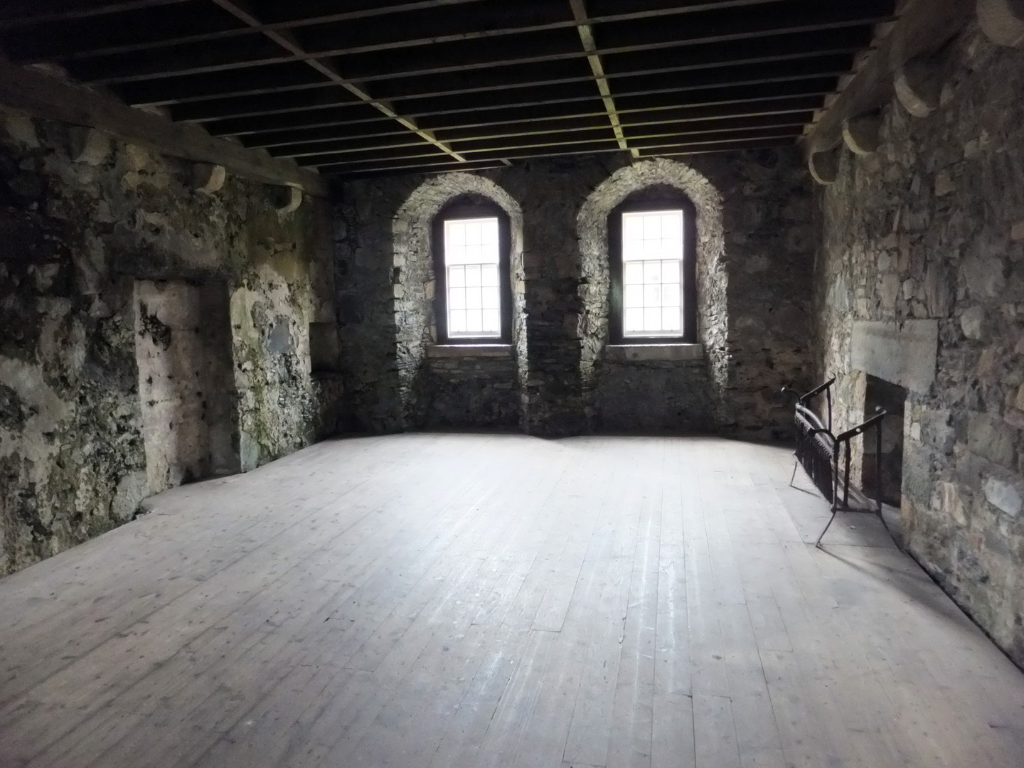 The gatehouse tower was remodelled into a tower house of three storeys and an attic with dormer windows. This tower is still floored and has access from the wall walk. In 1725 a two-storey house was added, which was altered in the 19th century. 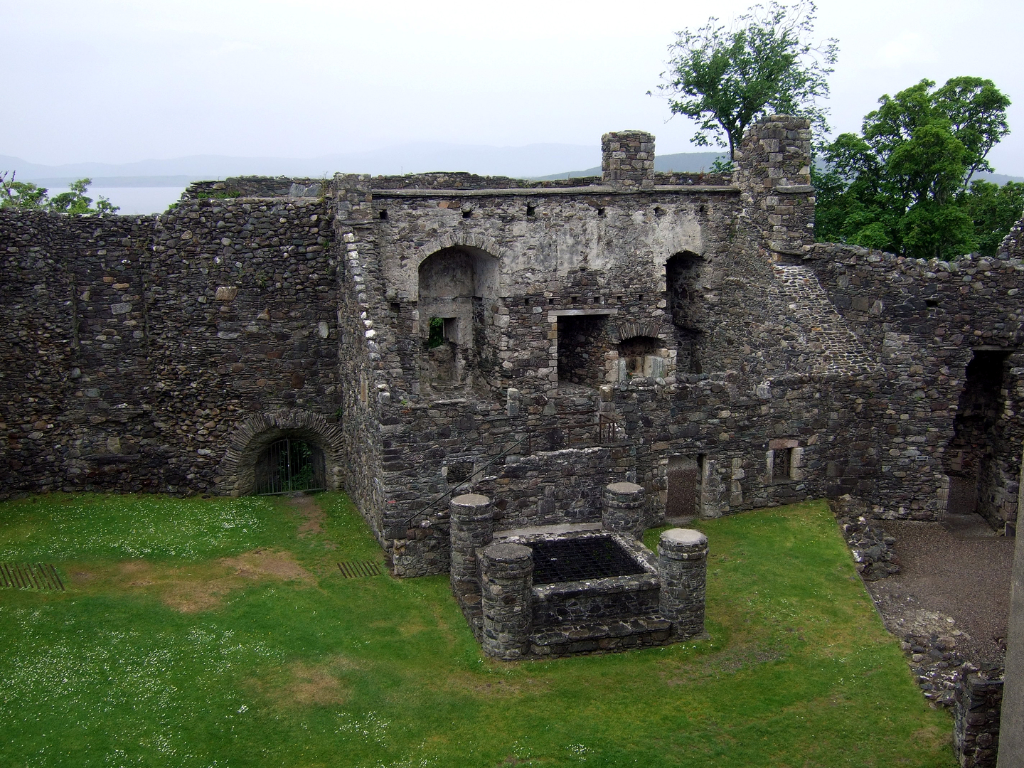 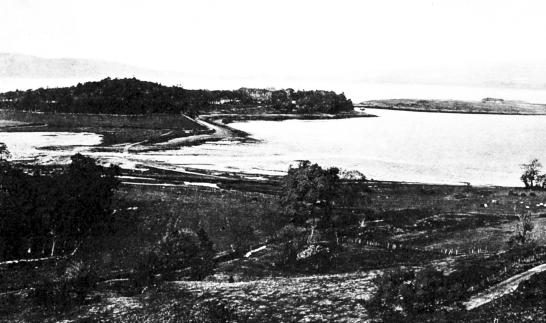 ‘Dunstafage’ is marked on Blaeu’s map of Lorn and is shown as a large tower on a rock. 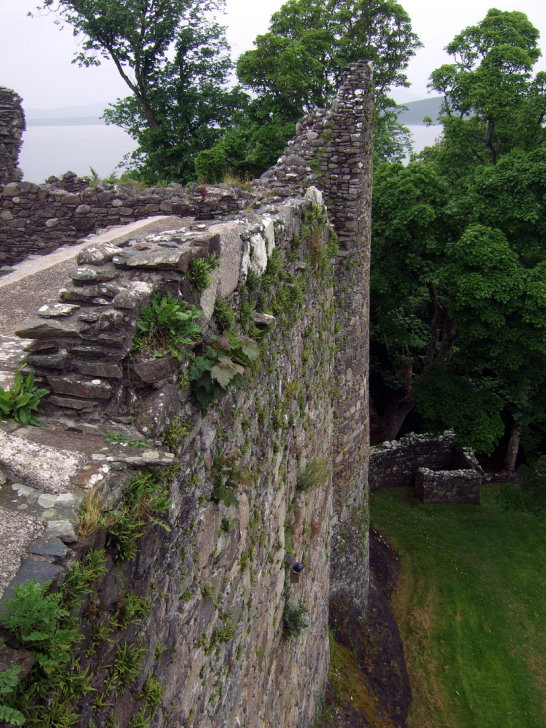 A stronghold here was held by the kings of Dalriada in the 7th century, and one of the places where the Stone of Destiny was perhaps kept. The present castle was built by the MacDougalls, who also had (and have) a castle at Dunollie. The castle was besieged and captured by Robert the Bruce in 1309 after the MacDougalls had been defeated at the Pass of Brander. Bruce made the castle a royal property, with the captain of the castle being the chief of the MacArthurs until 1470 when the office went to the Campbells of Inveraray. 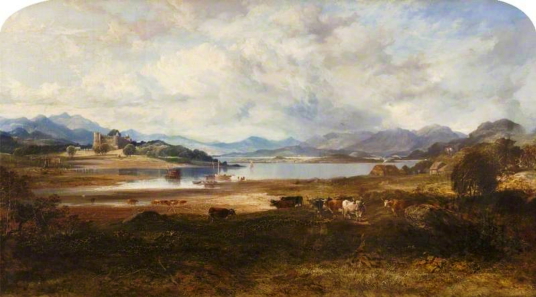 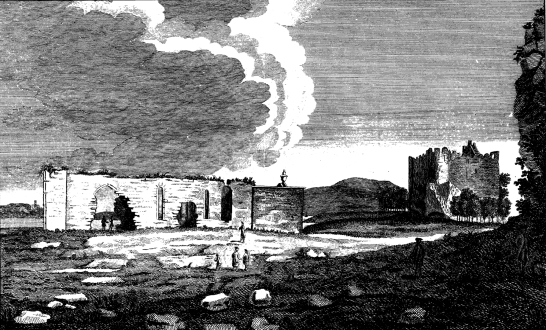 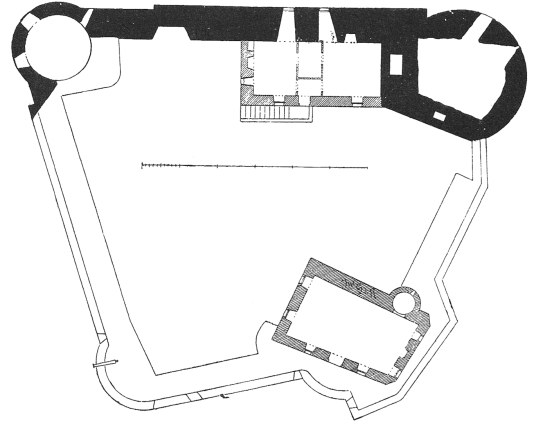 In 1455 James Douglas, 9th Earl of Douglas, fled here to seek help from the Lord of the Isles after James II had destroyed the power of the Black Douglases. James IV visited twice. Alexander Campbell, captain of the castle, was slain at Flodden in 1513. Archibald Campbell, 9th Earl of Argyll, burned the castle in 1685 during his rebellion of the same year, although he was later executed. 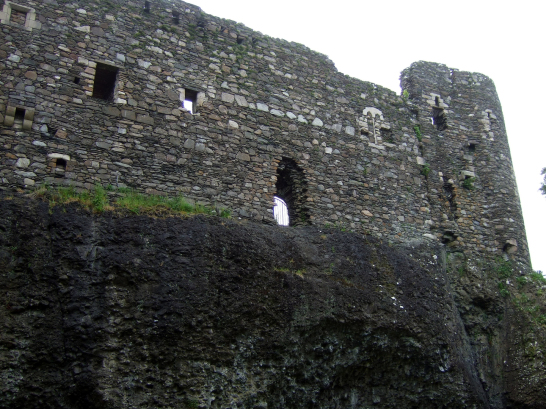 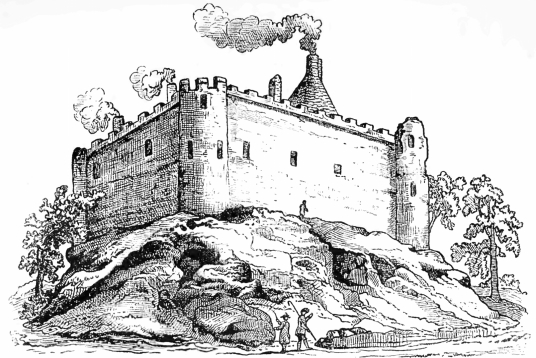 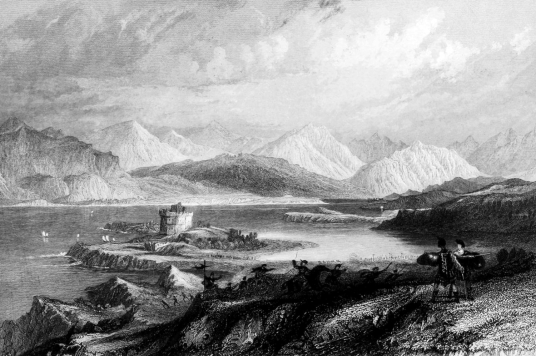 Angus Campbell of Dunstaffnage signed an oath of loyalty to George I, and in 1715 and 1746 government troops occupied the castle during the Jacobite Risings, and Flora MacDonald was briefly imprisoned here after helping Bonnie Prince Charlie. The castle was put into the care of the State in 1958.

The Campbells moved to Dunstaffnage House [NM 900334], which is still their residence. The captains of the castle are supposed to spend at least one night in the castle each year to retain their post. 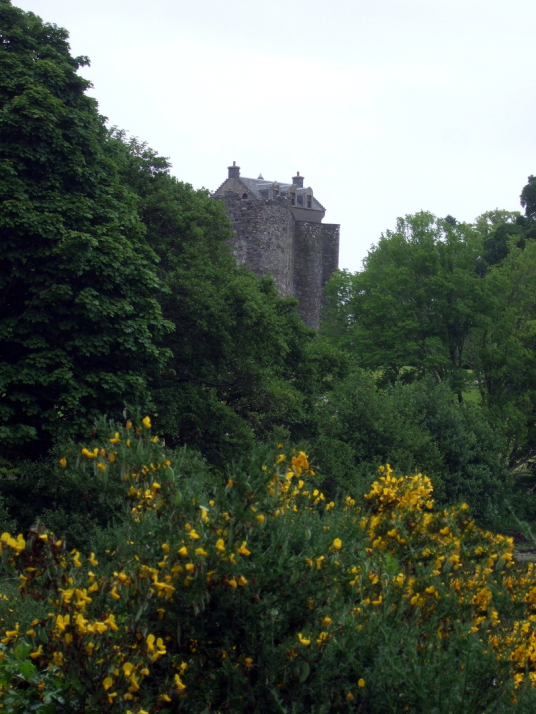 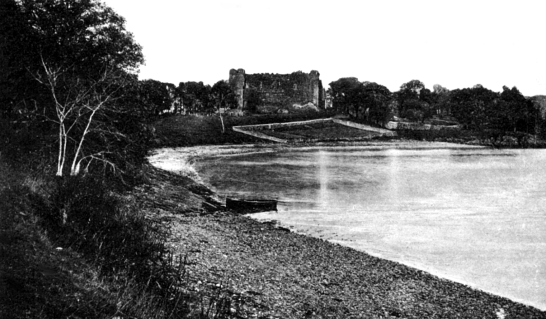 There is a fine ruined chapel [NM 881344] near the castle in an atmospheric setting, dating from the 13th century, which incorporates the Campbell burial aisle, dated 1740. 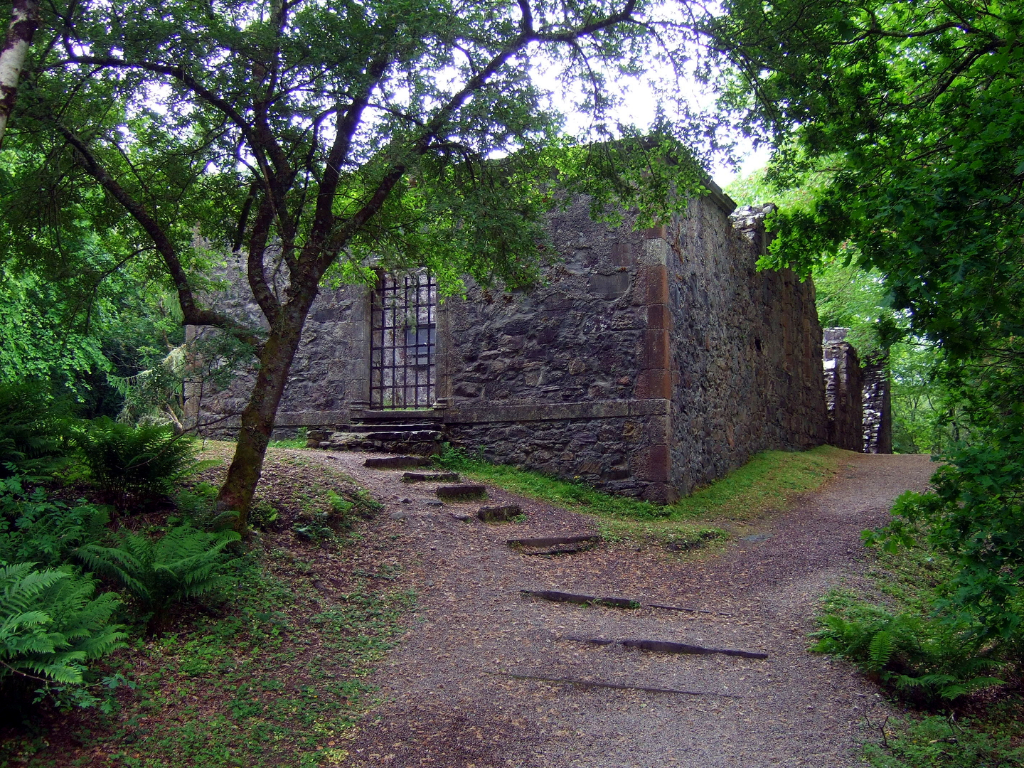 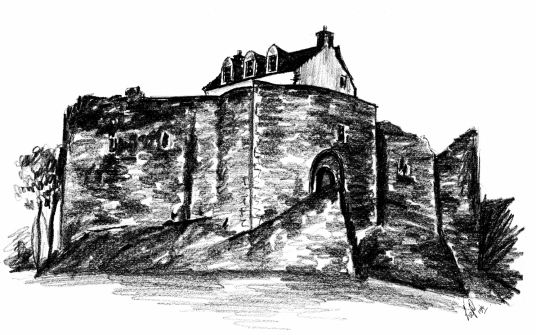 The castle is said to be haunted by a ghost in a green dress, the ‘Ell-maid of Dunstaffnage’ and her appearance heralds events, both bad and good, in the lives of the Campbells (or the owners of the castle, anyway). When she was seen to be smiling then there were happy events to come, but if she was sad or weeping it augured trouble. The spirit was also said to be able to hand on handicraft skills.