Spynie Palace, a castle despite its name, has one of the most impressive towers in Scotland, and was held by the Bishops of Moray who had their cathedral at Elgin in Moray in northeast Scotland. 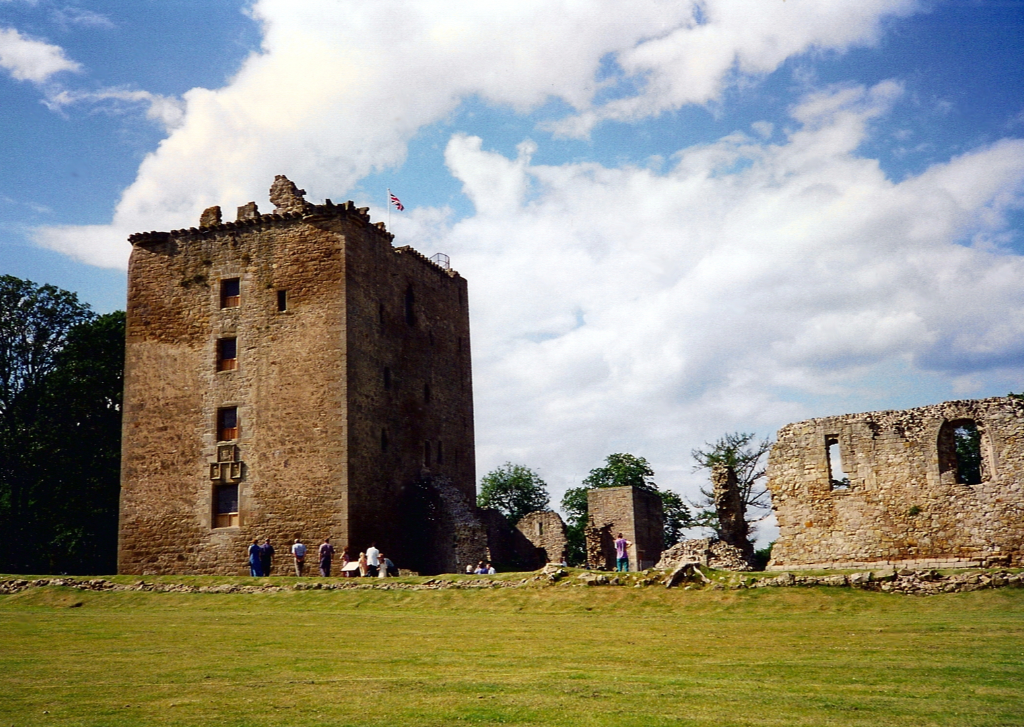 Moray: About 2.5 miles north of Elgin, on minor roads east of A941, west of Spynie Loch, south of Terchick Burn (Spynie Canal), at Spynie Palace.

Off A96, North College Street, Elgin. 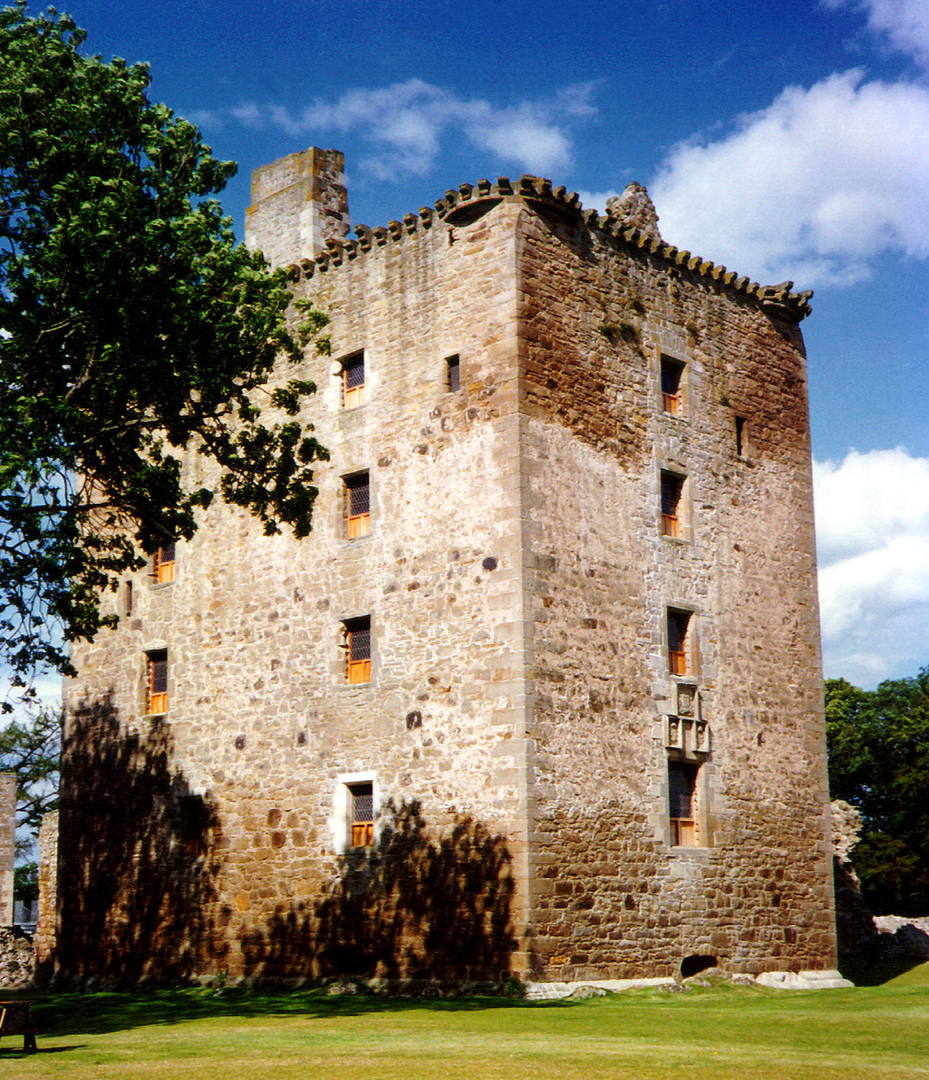 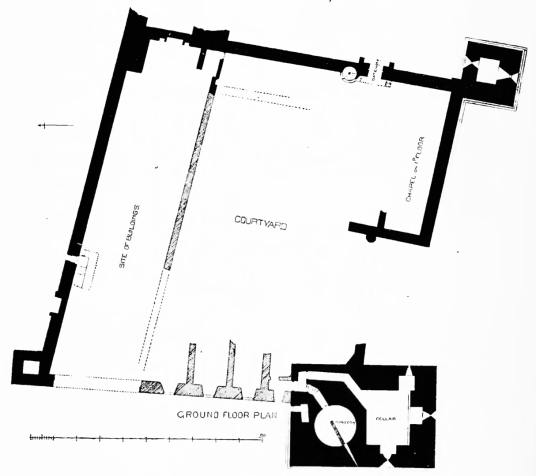 One of the finest fortresses in Scotland, Spynie Palace consists of a massive 15th-century tower at one corner of a large courtyard, enclosed by a wall, with square corner towers. In one wall is a gatehouse, and there were ranges of buildings, including a chapel, within the courtyard walls. 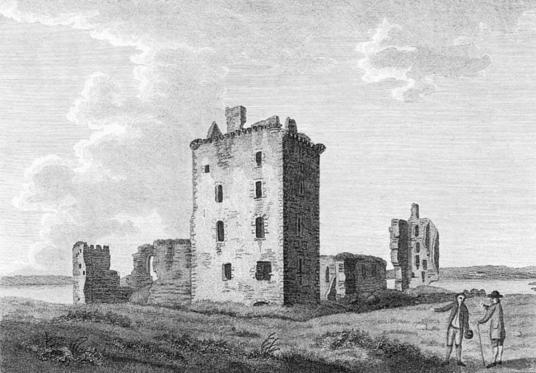 The main tower, David’s Tower, rises six storeys to the parapet, and has very thick walls. The garret and upper works have gone, although the corbels for the parapet survive. The walls are pierced by gunloops. There are fine views from the tower. 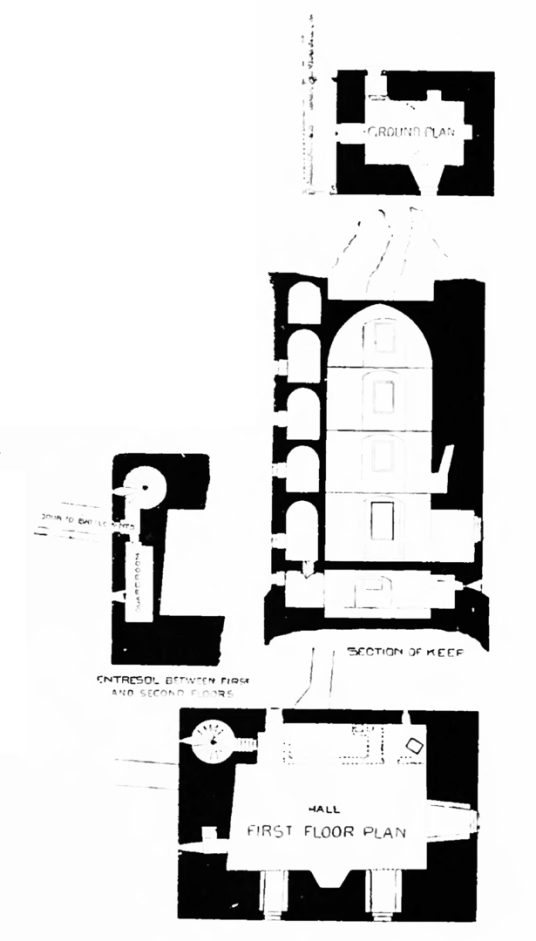 Spynie Palace: plans and sections of tower (MacGibbon and Ross)

There were two entrances at basement level, one from the courtyard into the basement, and one, a postern, from outside the walls, which opens onto a stair to the first floor. The courtyard entrance led to the vaulted basement, which contains a large round vaulted chamber, formerly the basement of an older tower. Also housed in the basement of David’s Tower, and reached by a passageway, is a wine-cellar, which was only reached from above by a hatch from the hall. 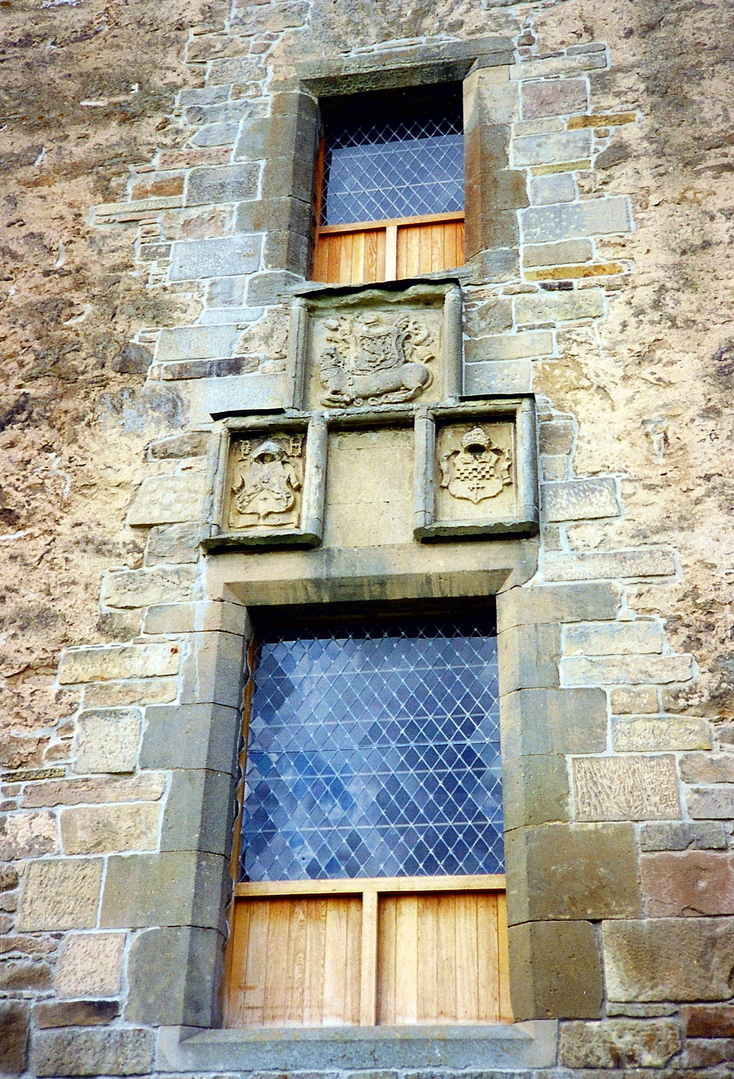 The main entrance, on the first floor, is approached by a stair up a mound. It leads, through a lobby, to a turnpike stair in one corner, and to a guardroom in the thickness of the wall. The hall, on the first floor, was a fine chamber with a large moulded fireplace and windows with stone seats. Five vaulted chambers, one above another, are built into the thickness of one wall, although these have been rebuilt. The top floor was vaulted, but this has collapsed, and has been replaced by a modern roof of a ‘unique’ design. 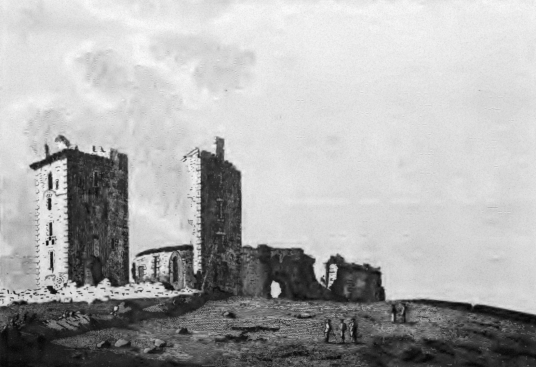 One corner tower of five storeys survives, as does a section of curtain wall and the gatehouse, but the rest of the courtyard is ruined. The elaborate gatehouse was defended by a portcullis. 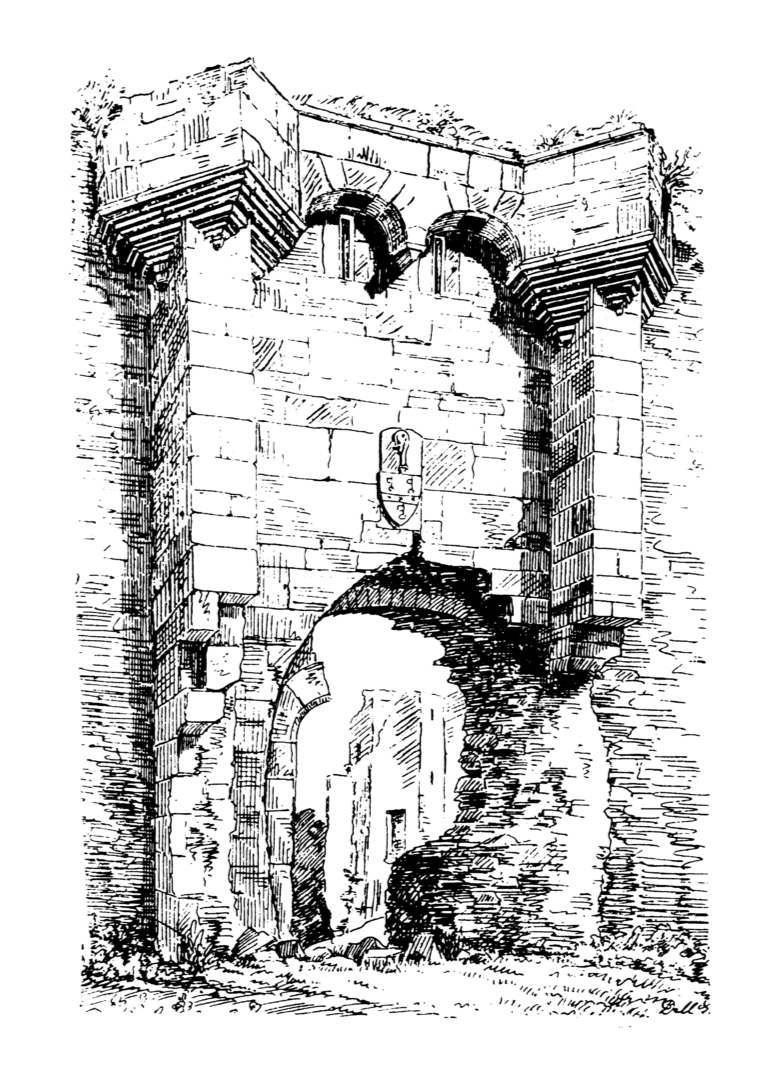 ‘Cast. of Spyny’ is marked on Pont’s map of Elgin and Moray, and is shown as a massive tower of seven storeys in a courtyard with corner towers. There is a walled park or orchard. 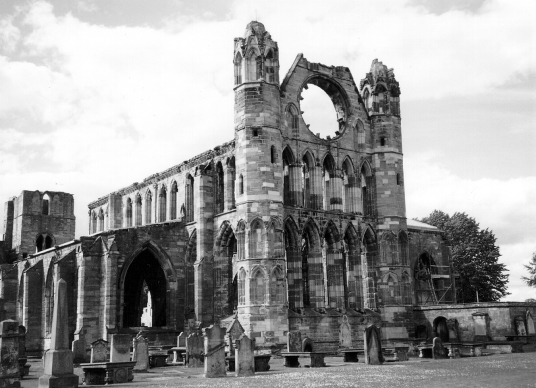 In 1200 Bishop Richard de Lincoln moved the cathedral of Moray to Spynie, where it stayed for 24 years. Later bishops fortified a promontory in Spynie Loch, once a sea loch with its own port, and although the cathedral was moved to Elgin (see below), they kept their residence and stronghold here. Over the next two centuries they built the grandest surviving bishop’s palace in Scotland. 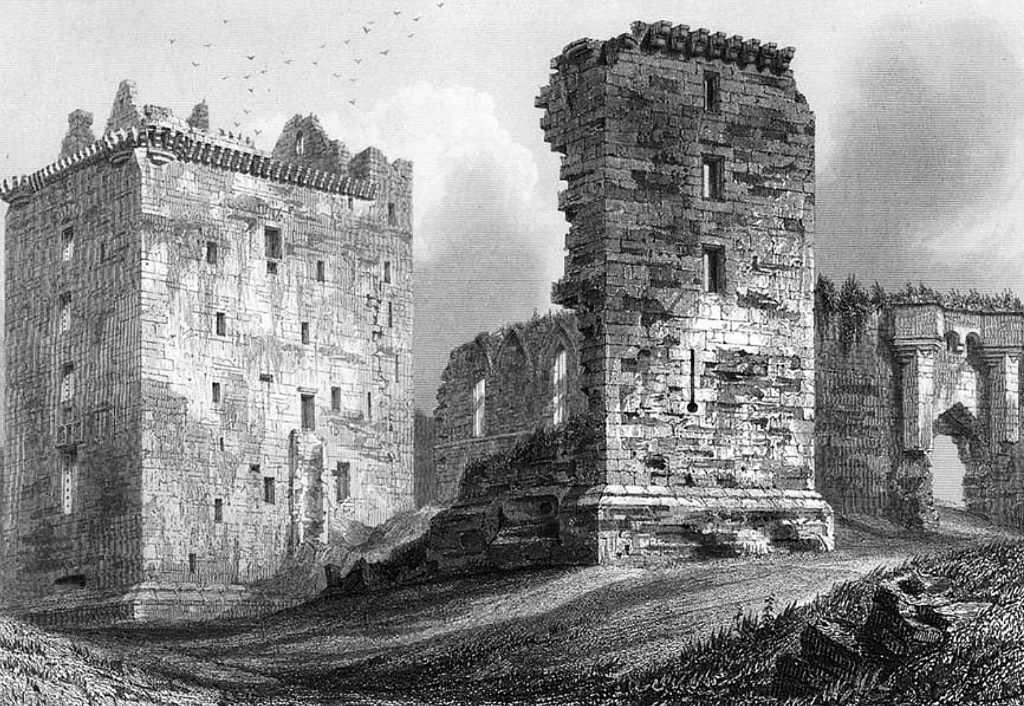 The palace was probably built by Bishop John Innes, just after Elgin Cathedral had been burnt by Alexander Stewart, the Wolf of Badenoch. Bishop David Stewart, who died in 1475, excommunicated the Gordon Earl of Huntly, and built the great tower, David’s Tower, to defend himself against retribution by Huntly. James IV visited the palace in 1493 and 1505, as did Mary, Queen of Scots in 1562. James Hepburn, Earl of Bothwell and third husband of Mary, sheltered here after defeat at the Battle of Carberry Hill in 1567, but soon fled north to Orkney and the Continent, where he was imprisoned in the Danish castle of Dragsholm until his death. 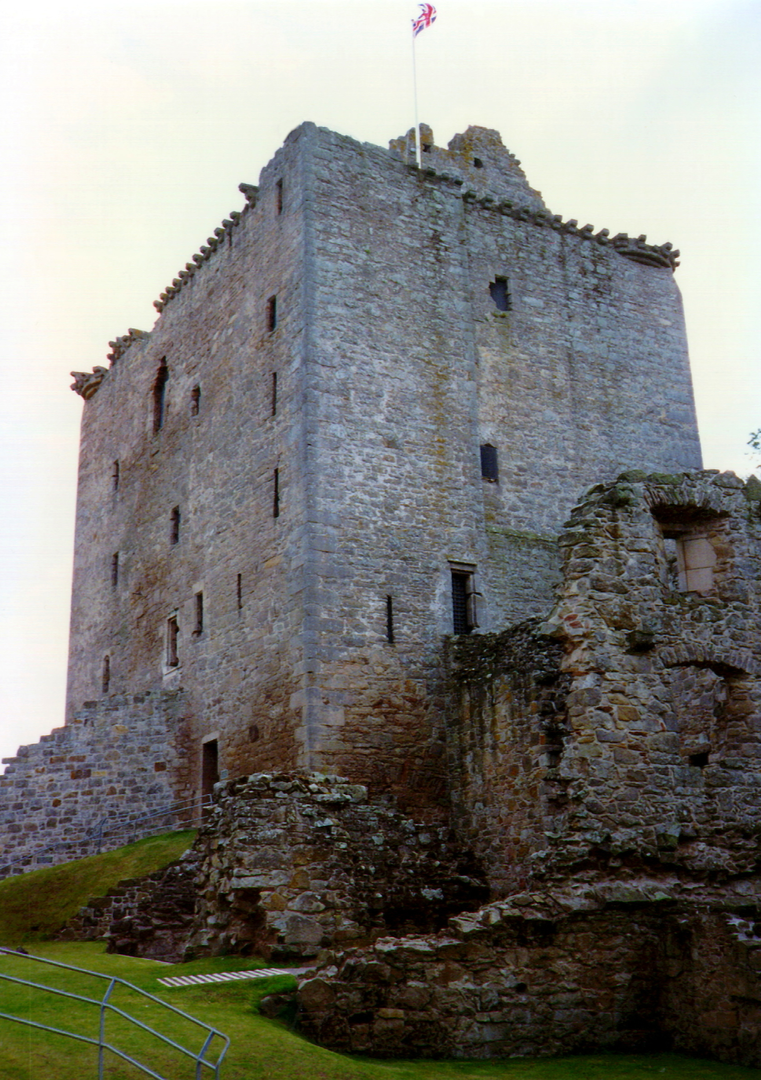 After the Reformation, the lands had been sold to the Lindsays, and Alexander Lindsay, Lord Spynie, got into trouble for sheltering Bothwell but was pardoned. He was slain in Edinburgh’s High Street in 1607 by David Lindsay of Edzell when he tried to intervent to prevent bloodshed between Lindsay of Edzell and David Lindsay, Earl of Crawford, who had killed Edzell’s father. 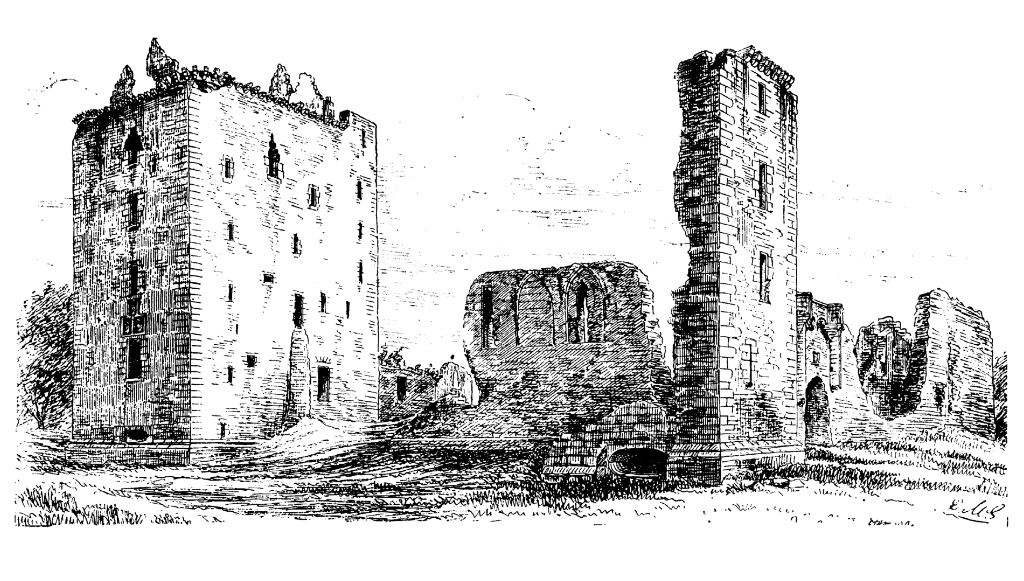 The castle was subsequently used by Protestant bishops. James VI stayed here in 1589. General Munro besieged the castle in 1640, and compelled Bishop John Guthrie to surrender it, and the bishop was imprisoned. The castle was held by Innes of Innes and Grant of Ballindalloch – who were Covenanters – against the Gordon Earl of Huntly, who besieged the palace unsuccessfully in 1645, while acting for the Marquis of Montrose. The last resident bishop was Colin Falconer, who died here in 1686, and Bishop William Hay, the last bishop, was removed from office in 1688. The building then became ruinous, and was stripped. It passed into care of the State in 1973. 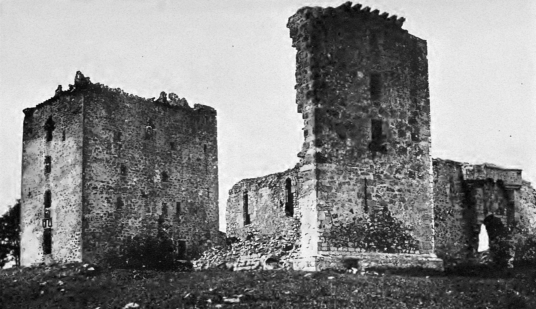 There were stories of the bishops being in league with the Devil, and that every Halloween witches would be seen flying to the castle. The castle is also reputedly haunted, and unexplained lights and unearthly music are said to have been witnessed here. There are also stories of a phantom piper and a ghostly lion.

Off A96, North College Street, Elgin. 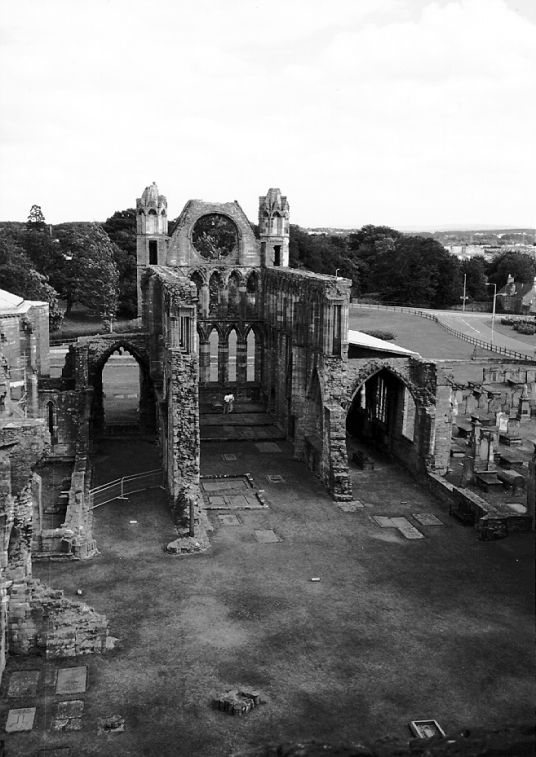 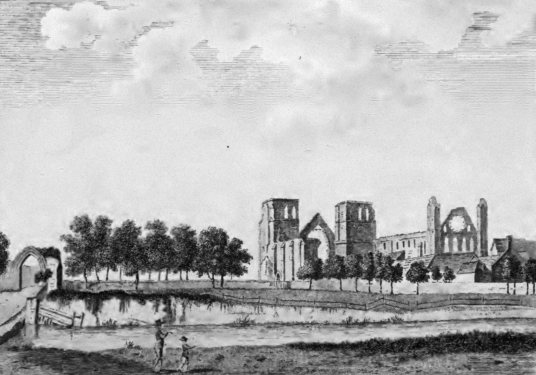 Once one of the most impressive churches in Scotland and known as the Lantern of the North, Elgin Cathedral is now a substantial ruin, standing by North College Street in the attractive city of Elgin. The cathedral dates from the 13th century, and was founded in 1224 as the seat of the Bishops of Moray, after they moved the cathedral from Spynie. The Cathedral was torched by Alexander Stewart, the Wolf of Badenoch, in 1390 as the then bishop has excommunicated him for deserting his wife among other deeds. 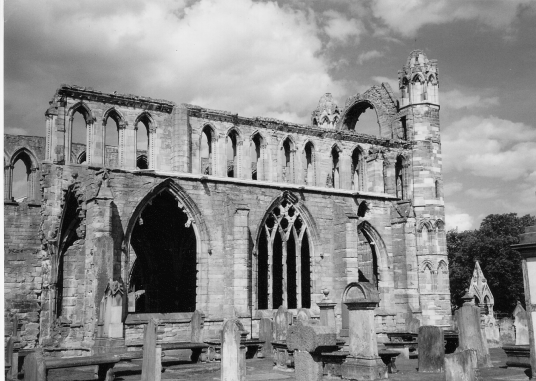 The church was repaired, but decayed after the Reformation. The central tower collapsed in 1711, bringing down much of the nave and transepts. The fine octagonal roofed chapter house survives, and there is a large defaced stone effigy of a bishop, along with many table tombs and an interesting graveyard. 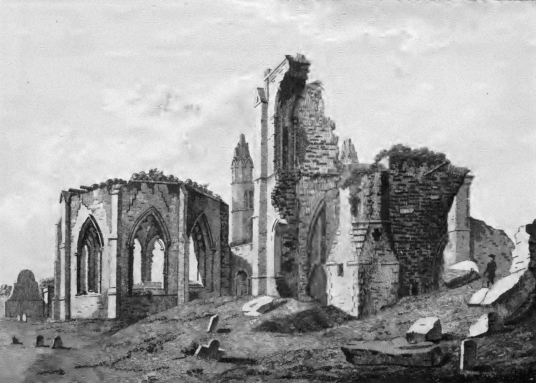 Within the cathedral is an impressive a Class 2 cross-slab, over 6 foot high and shows a decorated cross with two winged figures, one over each arm. Below the left arm is one of the four Evangelists, St Matthew, with his symbol of a Man above him; below the right arm is another Evangelist, St John, beneath his eagle symbol. Beneath the cross are four intertwined beasts. The back of the stone shows a double disc and z-rod, a crescent and v-rod, and four mounted huntsmen with hounds in pursuit of a stag. One huntsman carries a hawk, and a game-bird sits on the ground in front of him. 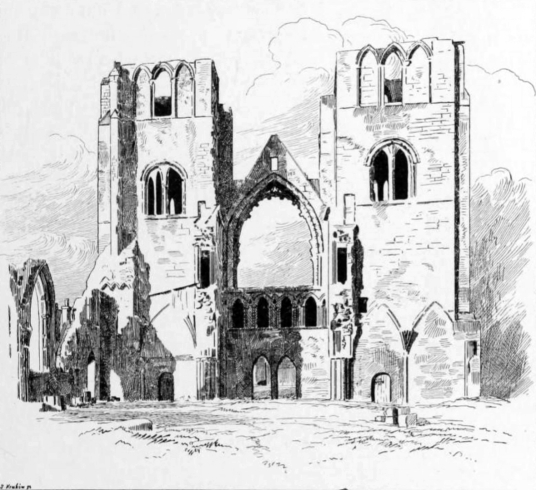 Moray: In Elgin, on minor roads north of A96, south of River Lossie, just west of cathedral at top North College Street, at edge of Cooper Park, at Bishop’s House.

OPEN: Open all year – view from exterior. The Bishop’s Palace at Spynie is also open to the public. 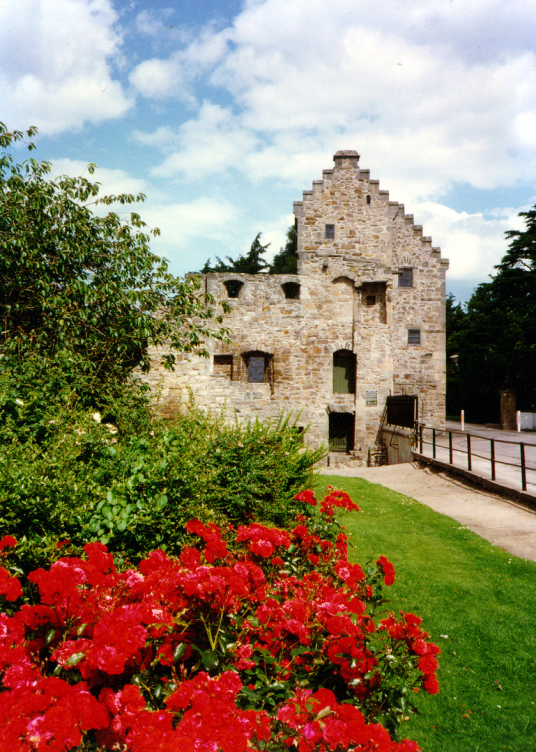 A residence of the Bishops of Moray, Bishop's House is an altered 15th-century L-plan building. In the 16th century a new wing was added to the stair-tower and this, with the tall arched gateway piercing it, is the part that survives. The walls rise to three storeys, while the stair-tower rises a storey higher to be crowned by a gabled watch-chamber. The windows are small, except for a fine oriel.

The basement is vaulted, and the main block contained a kitchen and two cellars. The wing, within the tall archway, has a standing-place for horses, with an adjoining cellar. The hall, on the first floor, formerly had fresco paintings.
The house was built a few years after the burgh and cathedral had been burnt by Alexander Stewart, the Wolf of Badenoch. After the Reformation it passed to the Setons. The house was complete until the end of the 18th century, when it was unroofed. In 1851 the Grant Earl of Seafield started to demolish it, but was stopped by protests, and the building was gifted to Elgin and what was left was later restored.
The L-plan North College [NJ 221632] was probably built as the Deanery in 1520. It is a fairly substantial building with good mouldings, corbels and pedimented dormer windows. The ground floor is vaulted. In 1858 it was transformed into an elegant modernised house.
South College probably incorporates part of the 16th-century Archdeacon's house, and still has some of its boundary wall.
Both these buildings were possibly fortified.
The Tower Hotel [NJ 216629], in the High Street, incorporates a 17th-century fortified lodging of the Leslies with a round tower crowned by a square caphouse; most of the rest of the structure dates from the middle of the 19th century. A datestone has 1634 and A. L. and I. B. for Andrew Leslie and Jean Bonyman, his spouse. The building is no longer a hotel and is now residential.

Very little survives of the 12th-century royal castle of Elgin on Ladyhill. ‘Elginn’ is marked on Pont’s map of Elgin and Moray, and the burgh and cathedral are depicted.

King Duncan is said to have died at the castle in the 11th century from wounds inflicted by Macbeth at a battle near Spynie. Edward I of England stayed at the castle for four days in 1296, during the Wars of Independence, and again in 1303, but it was recaptured by the Scots in May 1308 and never rebuilt. There are excellent views from the top.
The chapel of the castle was dedicated to the Virgin Mary, hence Ladyhill.

Among many attractions in Elgin is the fascinating Elgin Museum, housed in a scenic building on the High Street not far from the cathedral.