Traquair House is a fabulous homely old castle and comfortable residence with an atmospheric and fascinating interior, long a property of the Stewarts and associated with Mary, Queen of Scots, in lovely grounds with a maze and brewery, near Innerleithen in the Borders in the south of of Scotland. 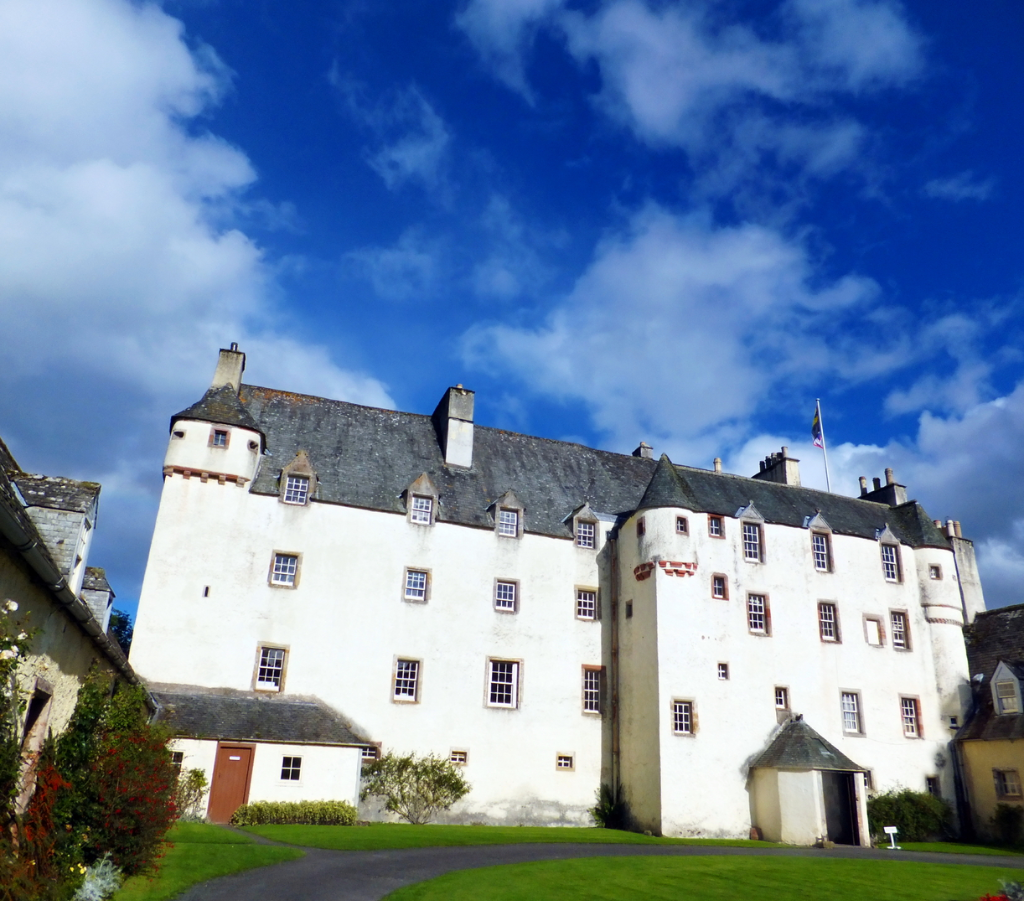 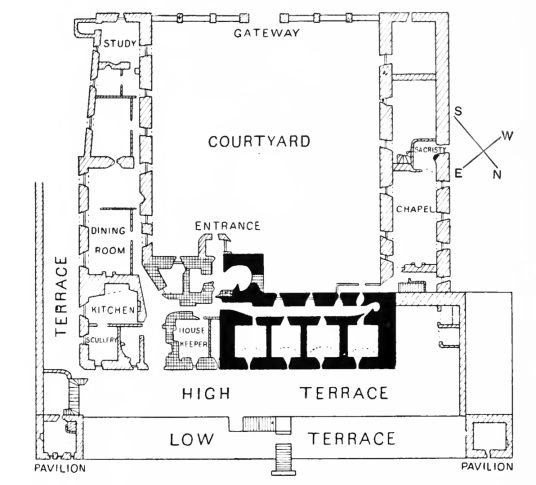 Borders: About 1 mile south of Innerleithen, on minor road between B709 and B7062, south of the River Tweed, at Traquair House. 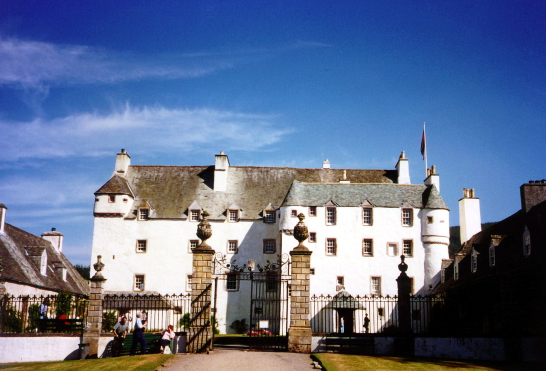 Reputedly the oldest continuously inhabited house in Scotland, and homely rather than a formidable fortress, Traquair House is an impressive altered and extended tower house, which has its origins from as early as the 12th century. The oldest identifiable part is incorporated at the left end of the main block, which was then extended between 1500 and 1600. The wings were added to the main house by the architect James Smith in 1694, and he also designed the courtyard and wrought-iron railings. The walls are whitewashed, and there are turrets, one with shot holes, and dormer windows, as well as a steep pitched roof. 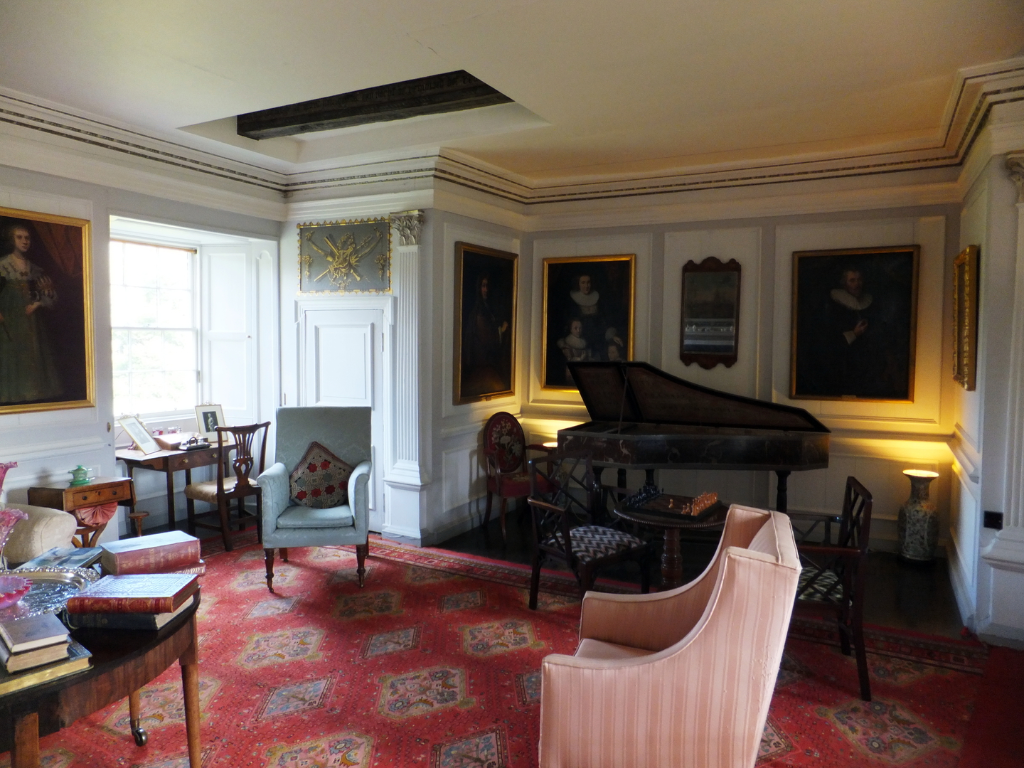 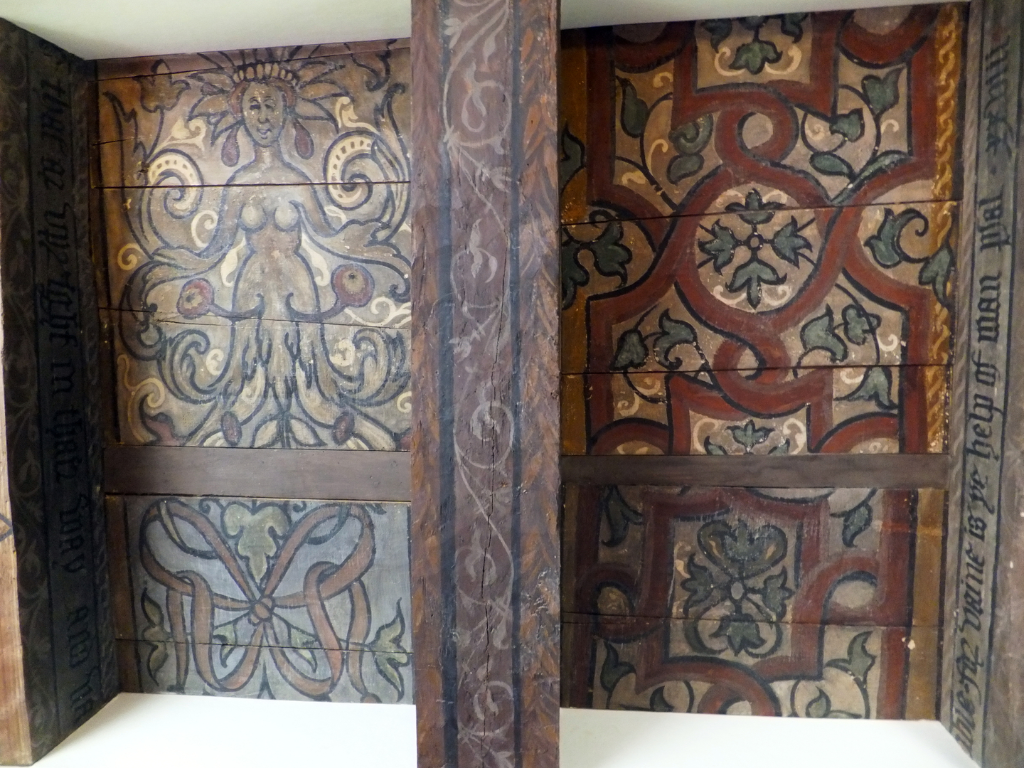 The main part of the house rises to four storeys and a garret. The later extensions were reached by a round stair-tower at one corner. There is a priest’s cell, on the top floor, complete with secret stair. The drawing room has a painted and inscribed ceiling with Biblical quotations, having been rediscovered in 1954.

There are also old wall paintings on the upper floor. 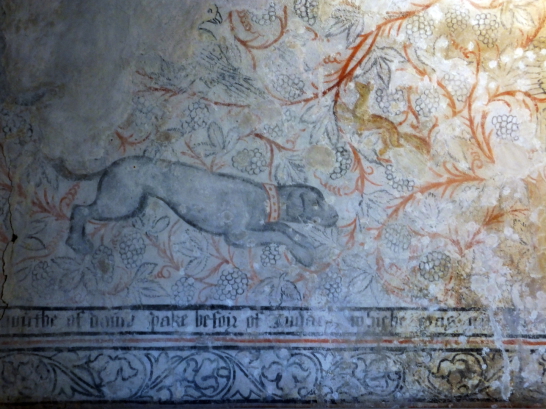 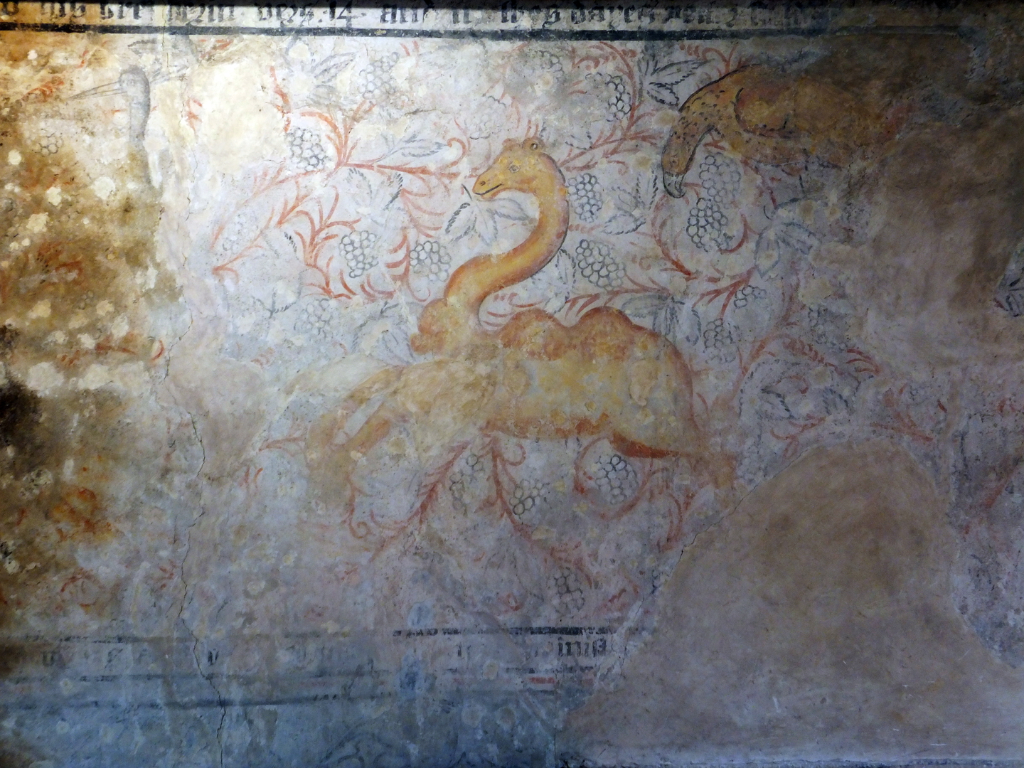 The place is marked on Blaeu’s map of Tweeddale as ‘Troquair’. 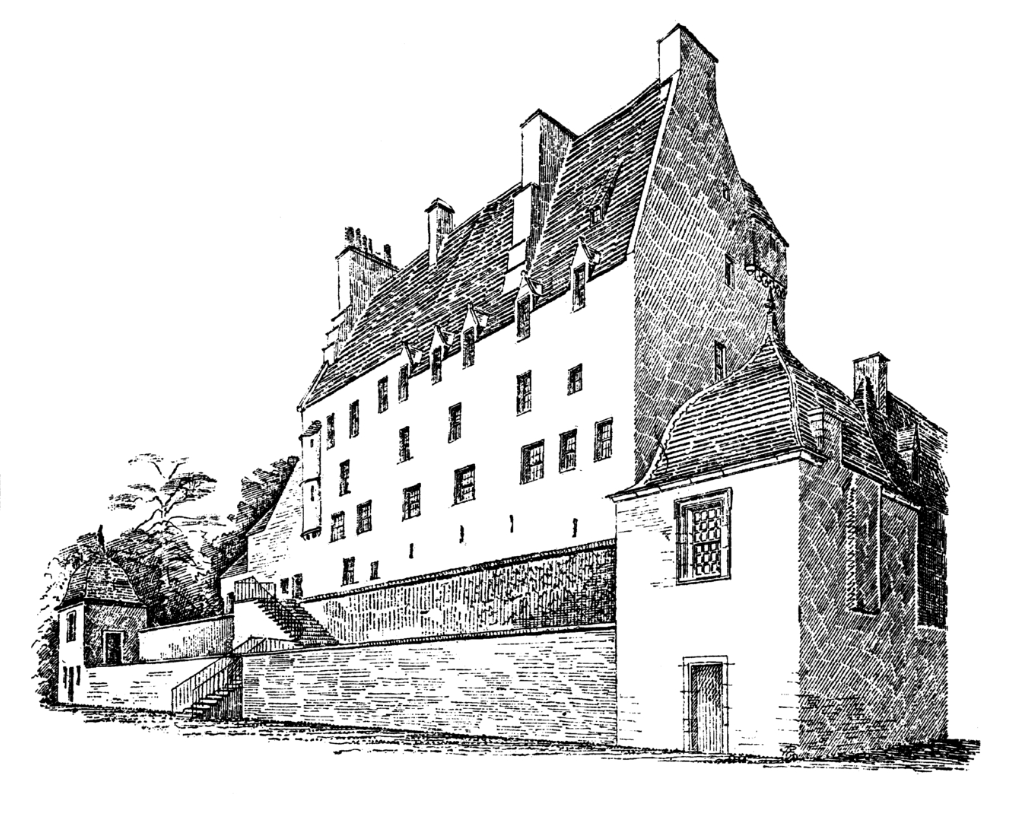 Alexander I had a hunting lodge here, and Traquair was visited by many of the monarchs of Scots (as many as 27), and some of England: Edward I and Edward II visited in the 14th century. The lands had passed to the Douglases by the 13th century, then through several families, including the Watsons in 1410, until sold to the Stewart Earls of Buchan in 1478. James, the then laird of Traquair, was killed at the Battle of Flodden in 1513. 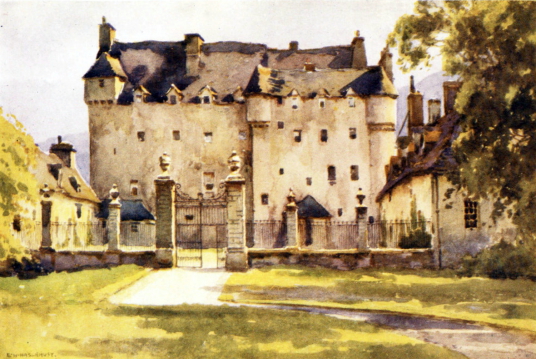 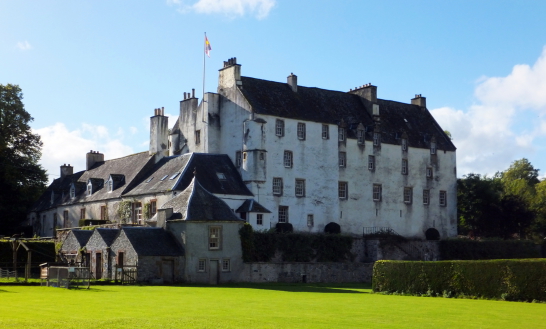 Mary, Queen of Scots, visited with Lord Darnley in 1566. She left behind a quilt, possibly embroidered by herself and her Four Marys, and reputedly the cradle in which the infant James VI slept during the visit. 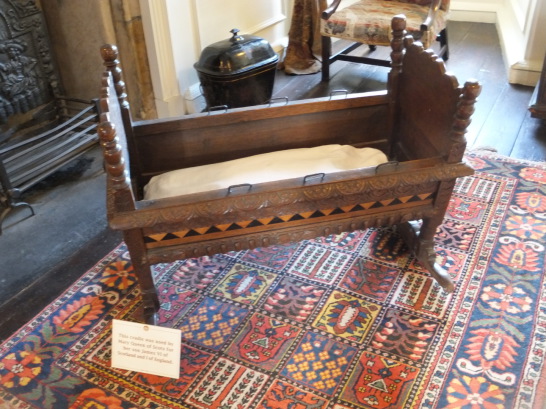 Traquair House: cradle in which the infant James VI slept

James Stewart, 4th Laird, helped her escape from Lochleven Castle after her abdication in 1568. The bed where she slept some of her last nights on Scottish soil was rescued from Terregles and is at Traquair, and other items on show include her crucifix, shoe and jewellery. 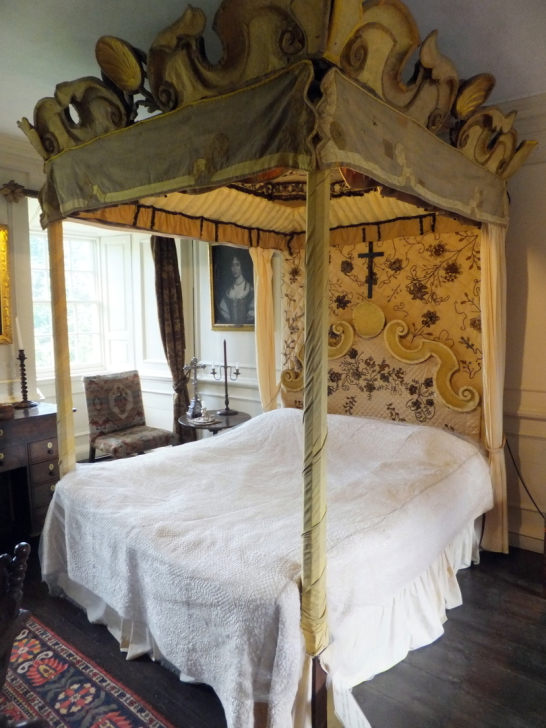 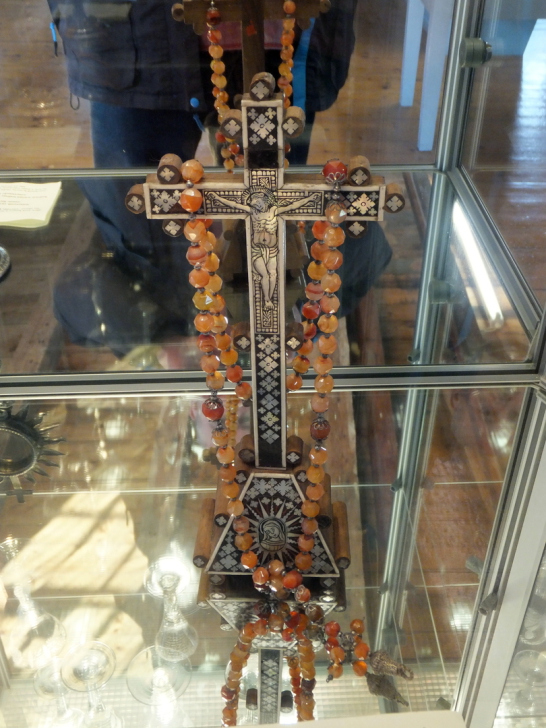 John Stewart was made Earl of Traquair in 1633. The Marquis of Montrose fled here after the Battle of Philiphaugh in 1645, but was refused entry by the Earl. Charles Stewart, 8th Earl, died in 1861 and the title became extinct on his demise. 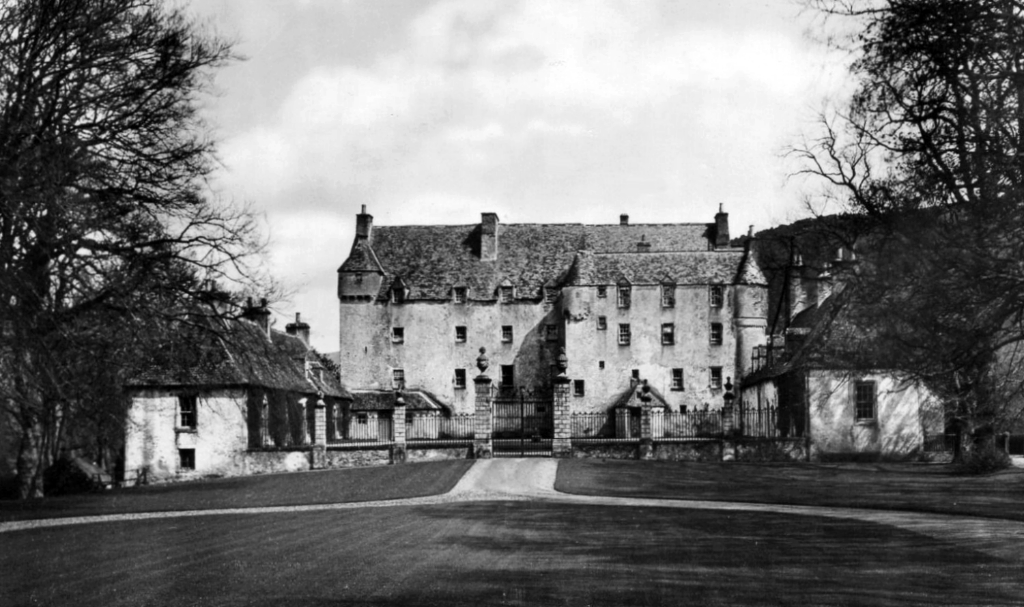 Bonnie Prince Charlie visited the house on his way south in 1745 to invade England. He entered Traquair through the famous Bear Gates. One story is that Charles Stewart, 5th Earl of Traquair,  closed and locked them after Charlie’s departure, ordering they would not be unlocked until a Stewart once more sat on the throne of the country. They are still locked and the Earl was imprisoned. 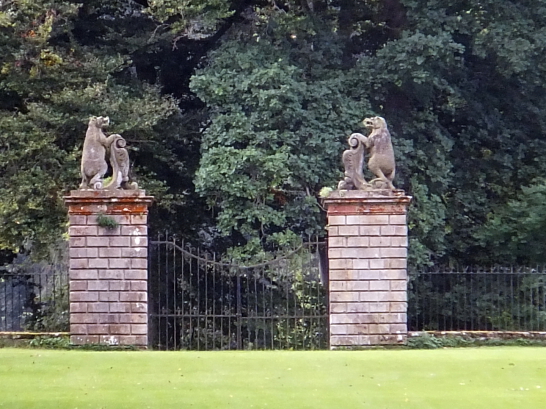 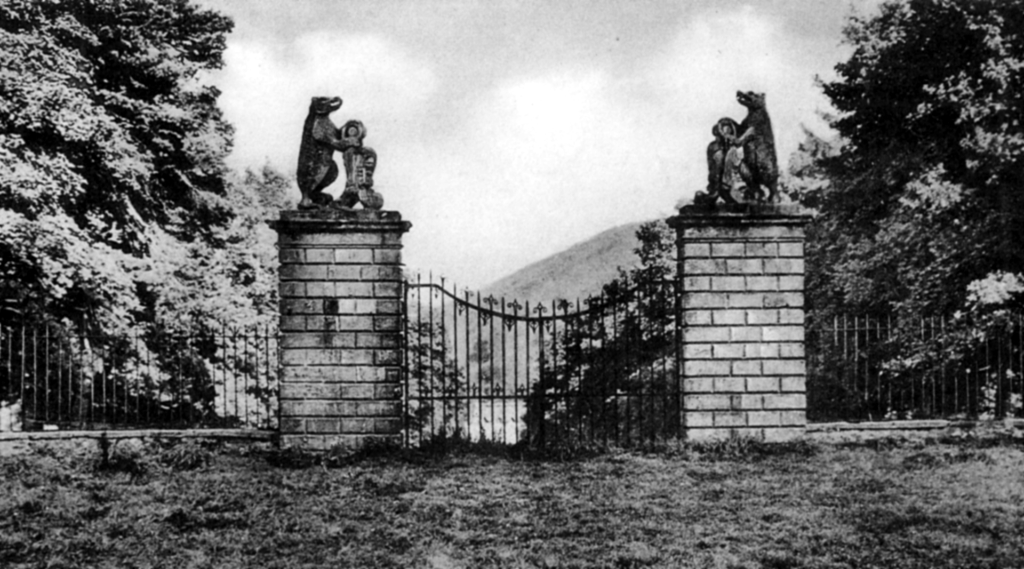 The house is now owned by the Maxwell Stuarts, and is home to Catherine, 21st Lady of Traquair. 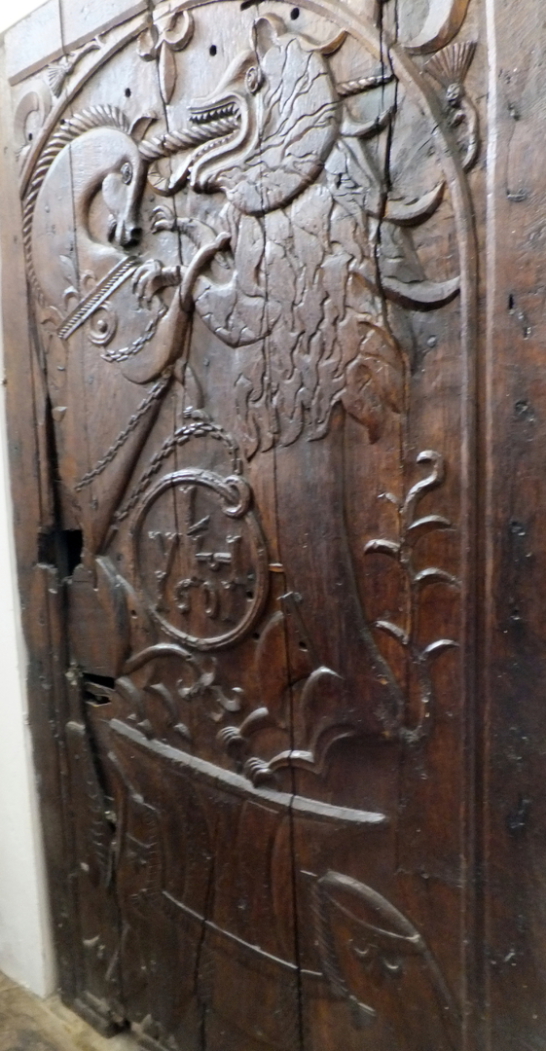 Traquair is not believed to be haunted, and this may be one of the few places that neither the spirit of Bonnie Prince Charlie nor Mary, Queen of Scots, haunts (!). The apparition of Lady Louisa Stewart, sister of the 8th and last Earl of Traquair, is reported to have been sighted in the grounds around the house, going on her favourite walk by the Quair. She lived to a fine old age, dying in 1875 when she was nearly 100 years old. Her photograph hangs in the house. 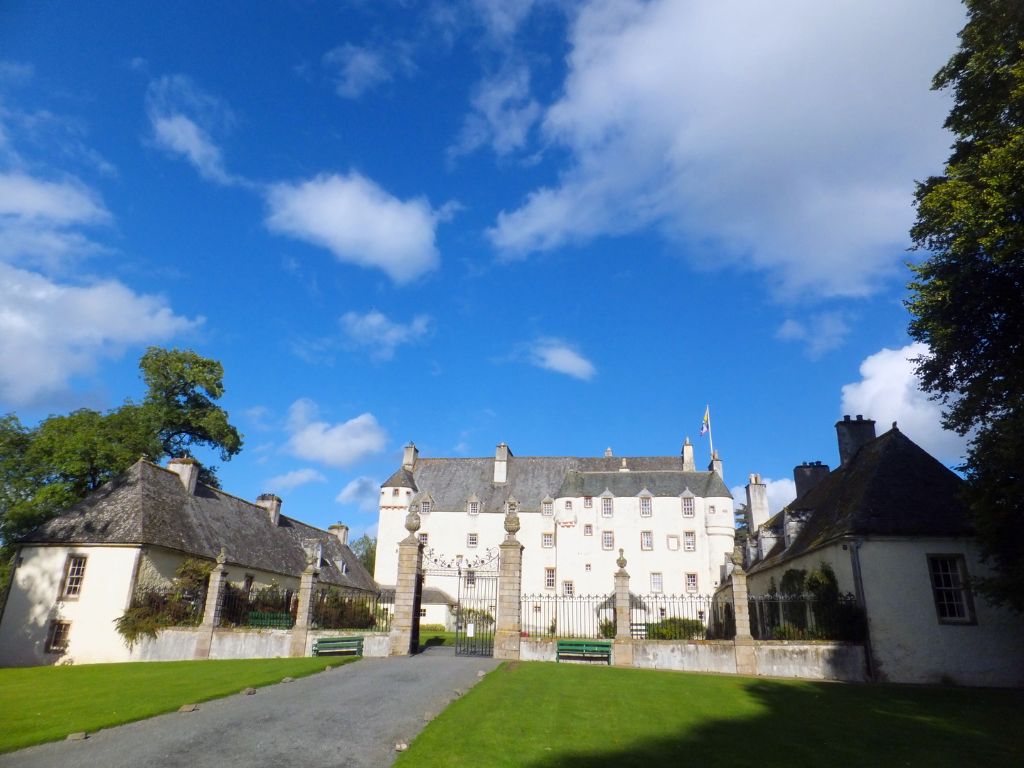 The house nestles in 100 acres of woodland and lawns, with a maze and garden, as well as a walk to the River Tweed. The grounds host outdoor productions of Shakespeare plays (Shakespeare at Traquair), the next production being Love’s Labour’s Lost in 2019. 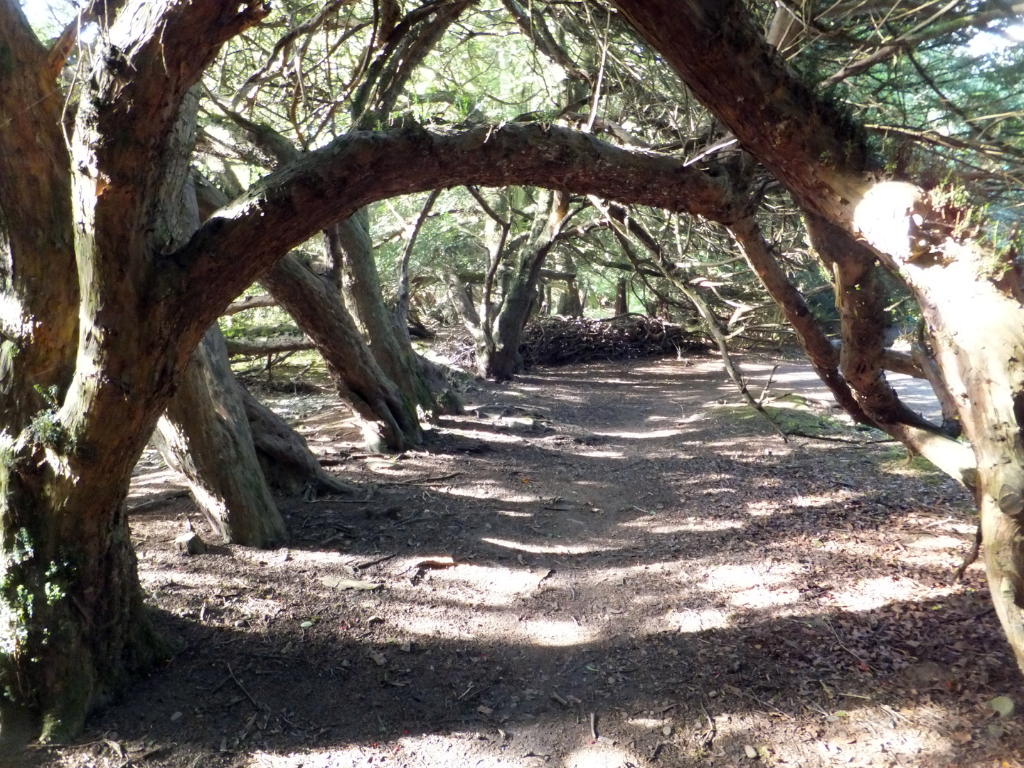